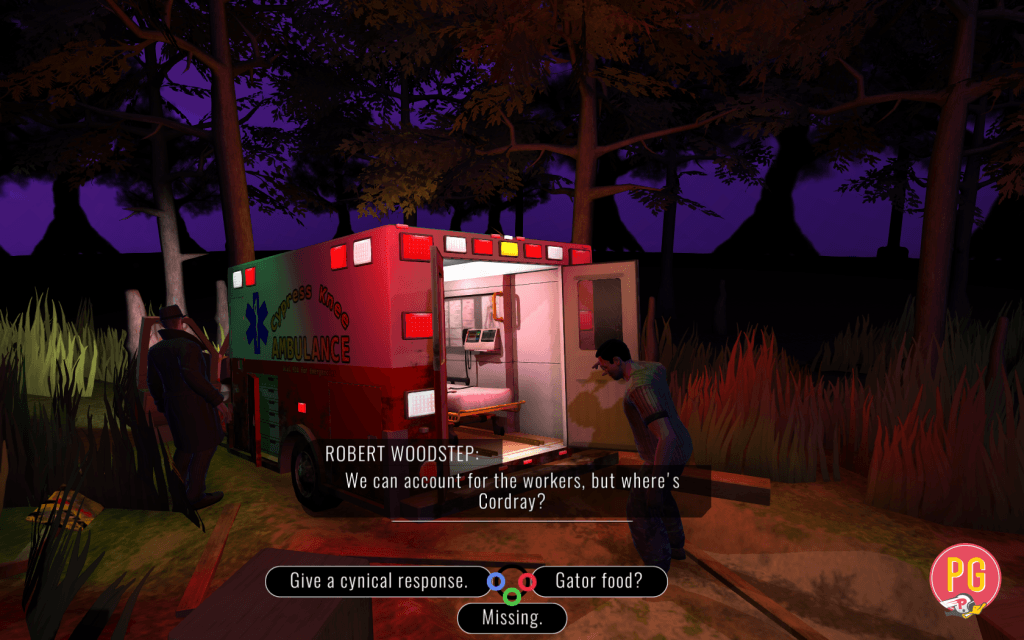 Knee Deep begins by framing itself as a play – a play where you can make choices, but the story will continue regardless. “This is a game you cannot lose,” the mysterious narrator tells you. It begins by setting up an interesting sense of intrigue. There’s creepy music, the odd setting which shows characters on a stage with set pieces shifting around them, and the choices you make in conversations which seem to be either meaningless, or the most meaningful.

Unfortunately, while all the above features are cool at first, they quickly become stale. The characters appear as miniatures on a stage, and while this is clearly a deliberate choice to highlight the whole freaky “the player is the puppeteer” angle, it makes it hard to care about the story. On which subject – the story is initially quite confusing, and not in a deliberate Twin Peaks way, as it clearly seems to think it is. It sets up that a mysterious suicide has taken place, but then it starts jumping around the sequence of events and flitting between characters, with the game’s designers apparently thinking that it’s fine to mess around the order of the narrative because other media have done it successfully – however, this is no Memento or Pulp Fiction. The story does settle down after a while, and it’s then that Knee Deep starts getting enjoyable.

There are three main characters that the player can control: hipster blogger girl; washed-up print journalist; and suicidal ex-cop – each of them trying to get to the bottom of the mysterious “suicide” of Tag Kern, a washed-up actor. Having used “washed-up” twice there, I realised that almost every character in this story could be described as washed-up in some way. This pervasive sense of vague depression and better days passed is one of the things that allows Knee Deep to so successfully emulate the mystery noir tone of old books and films. 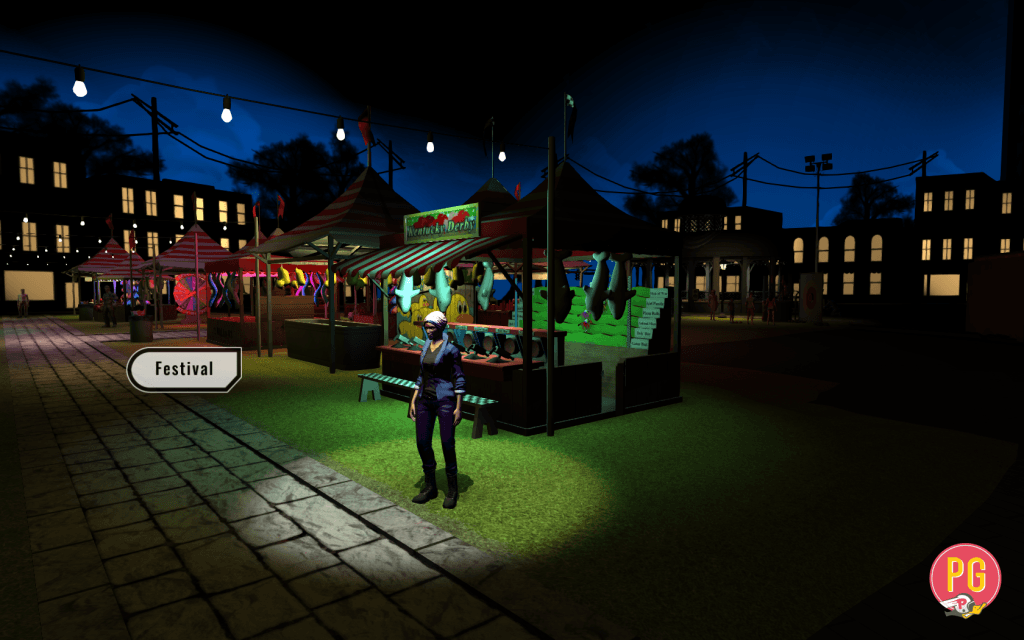 The conversation choices one makes are pretty much the extent of the gameplay. While this is hardly unusual in the age of ongoing Telltale success stories, Knee Deep fails to capture what works well in those games, such as The Walking Dead. The choices you make often don’t make sense until you choose them – while it may be the game’s intention to be deliberately elusive, it instead makes it difficult to “play”; I often felt that I might as well just press random buttons, since it was a mystery what my choices meant anyway, and this certainly didn’t help me to feel engaged with the game. The rest of the gameplay is the occasional puzzle that pops up – these aren’t particularly good, but are neither especially offensive – rather, they just seem to have been jammed into the game for the sake of making it more game-like.

One does start to get the hang of the conversation choices, but they often feel superficial. You are required to make a blog post about an actor’s suicide, and can choose whether to be inflammatory (i.e. posting that he probably killed himself because his films were so bad) or cautious (stating just the facts).The first option will keep your boss happy by getting you more tasty clicks, but it is liable to piss off the late actor’s friends who you may need to interview later. While this is an interesting mechanic, in practice it feels a bit meaningless – the characters you talk to might make a comment in response to your earlier choice (and a little prompt comes up in the corner to tell you this, as though trying to remind you how clever the game’s designers are), but these seem to mostly have little impact on the story. There’s also no way of knowing what the right or wrong answer is, in terms of what might net you the better ending, which makes it hard to choose. Some might enjoy the freedom to freely let their moral compass decide – however, those that like to win their games may struggle with this. Unlike a game like Until Dawn, one can’t try and pre-guess whether their decisions will have a positive or negative impact, and nor does one care enough about the characters to make a decision based on emotion.

Speaking of the characters, while there is a varied cast of interesting characters whose archetypes feel well at home in a mystery story (friendly small town cop, surprisingly smart janitor, creepy religious nut), they feel rather undeveloped, which is a shame when their basic character descriptions imply so much more depth. This is rectified somewhat by the high quality of the voice acting, which does lend extra depth to the characters where there may not be otherwise. The three main characters are more developed than the rest of the cast, as one would hope, although a lot of their personality is determined by the player’s choices.

A lot of conversation choices comes down to “be a dick” or “don’t be a dick”. It seems a bit lazy for the writers to do this, as it’s pretty obvious which would yield better results when trying to get information out of someone – one of the achievements of Telltale games is making all the choices you’re presented with seem reasonable for the character, but Knee Deep struggles to do the same. 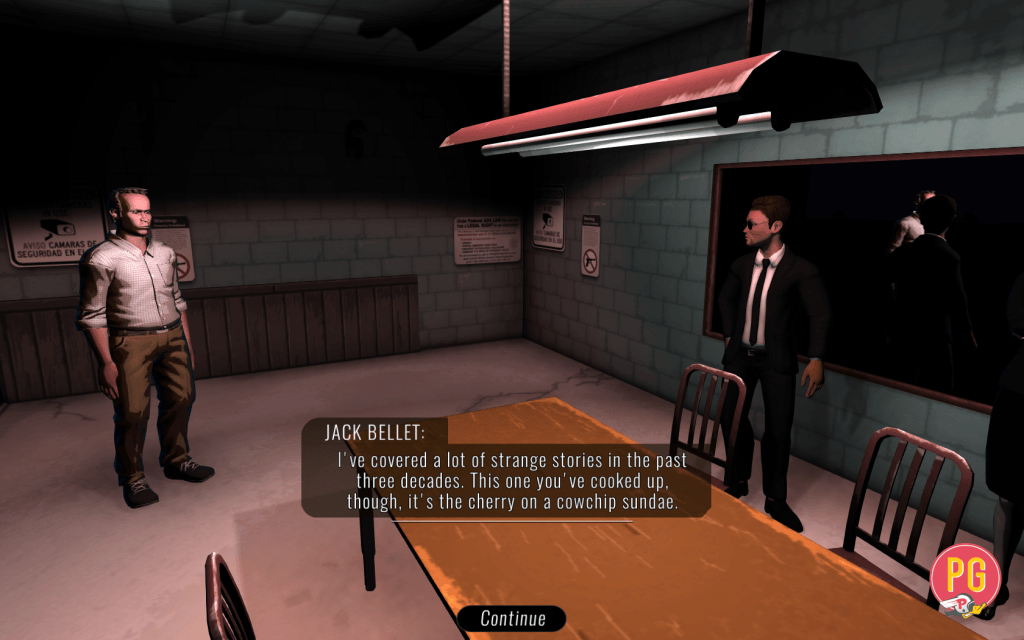 The graphics are really rather basic, and the character sprites in particular look like they came out of a late 90s PC game. However, combined with the ominous lighting, they do actually add to the game’s weird atmosphere more effectively than more conventional “good graphics” would. Knee Deep has a great soundtrack, with dreamy guitars giving proceedings a slightly sinister shoegaze vibe.

Instead of loading screens, between sections we see whichever of the three characters the player is currently controlling get picked up by a crane and moved to the new setting. Again, while someone on the design team probably thought it was a cool idea, it serves only to further disconnect the player from the characters – where other games try to make you so immersed you forget you’re playing a video game, Knee Deep is constantly reminding you. One does get more used to these quirks as the game goes on, but I could never shake the feeling that the game would have been far better had it played it just a little straighter. And there is no denying that the whole stage aesthetic looks cool, but it’s just at odds with the content.

The crux of the matter is that at its core Knee Deep is an intriguing mystery story. If the player can get past, or even learn to enjoy, some of the weirder aesthetics and decision-making, then they will find a game that is definitely worth sinking some time into.