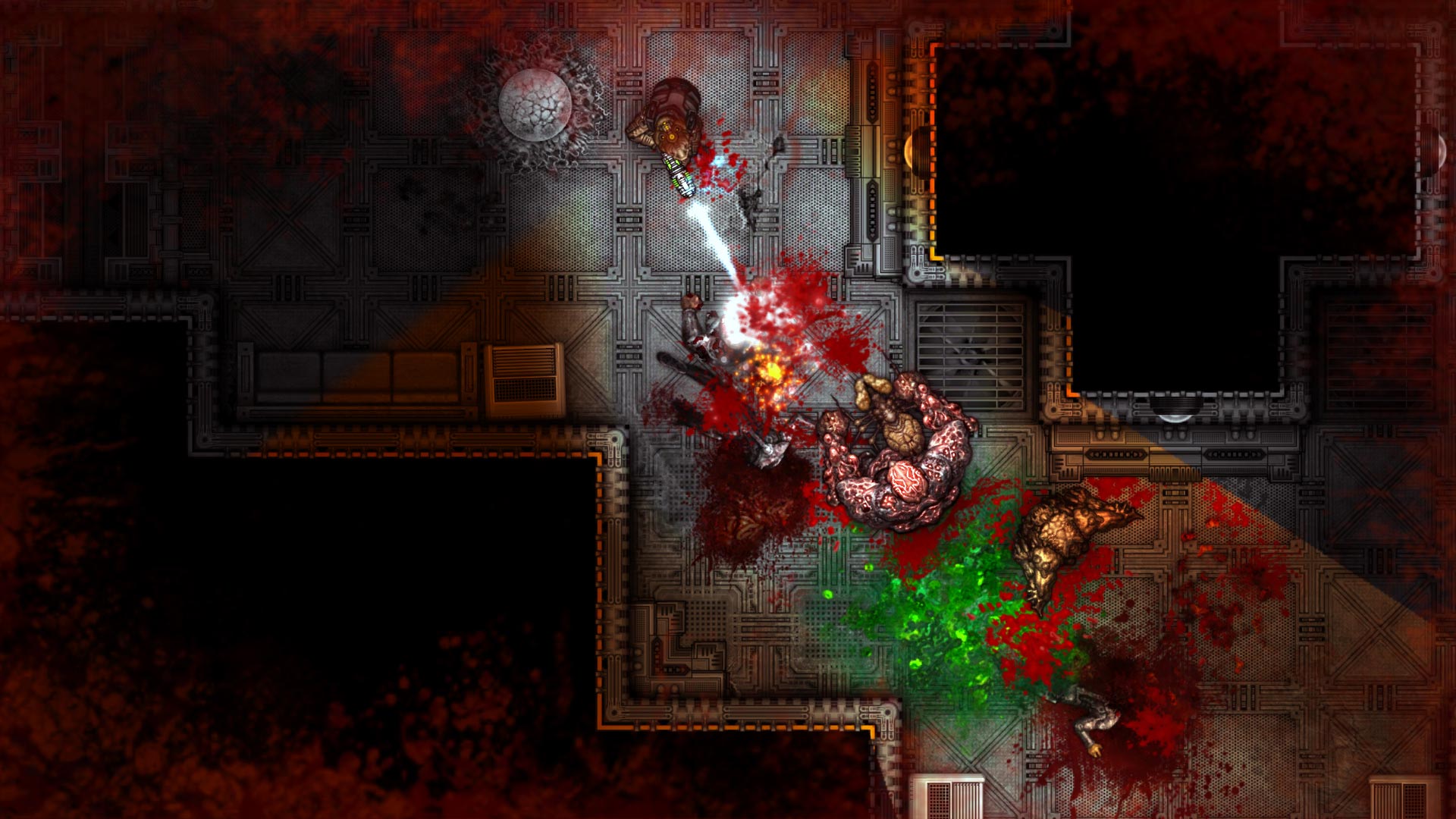 I got excited when I first saw Subterrain. From preview footage it looked like an action orientated overhead shooter, cut from the same cloth as games such as Alien Breen or Alien Syndrome. Upon playing the game for myself however, I soon learnt that there was far more to it than that.

Subterrain takes place in a colony based on Mars. You play as Dr. West, a scientist who has been unjustly imprisoned for murder. The game begins with Dr. West locked in his cell when there is a power failure along with some other mysterious commotion. Since the power failure knocked out the electric fans in his cell, he is able to escape and investigate. He soon learns that everyone on the colony has been savagely killed by mobs of hostile creatures. From here on, your objectives are simply to survive and if possible escape.

The first issue I encountered while playing was that it isn’t very friendly to newcomers. I switched on the tutorial option before I started, unfortunately it isn’t the most intuitive tutorial I’ve ever played through. In order to survive there are several game play mechanics that you need to keep on top of (arguably too many). Things you need to keep in check include your levels of hunger, thirst, fatigue, hygiene, contamination levels, atmosphere and more. You have to manage resources, salvage materials, study weapon segments, read data logs, recycle. Each time I encountered something new a few paragraphs of text would pop up to inform me of the mechanic, but that was as far as the tutorial went. I found myself getting bombarded with information with few opportunities to put any new skills into practice.

The opening mission is to escape from the prison facility. If you’ve played the game before and are familiar with how the system works then this area should be a piece of cake. However, since I was coming in blind I found everything very confusing. I kept looting crates and finding nothing but broken equipment. I didn’t know whether it was simply trash or if any of the material would be useful later on down the road, so in the end I just gathered up everything. What would have really helped is if this area was streamlined into a proper tutorial mission where you had to craft and practice basic skills in order to progress, so by the time you made it to the hub area any new players would feel semi competent.

The main hub area didn’t make life any easier, in fact it got worse. The central hub is a secure base with storage units and lots of different equipment. I explored around the various machines trying to make sense of it all, but it was all a bit overwhelming. In the end I resorted to desperate measures. I saved the game, grabbed my phone and searched YouTube for a Let’s Play video. I needed some guidance from an experienced player to get me started. After a while I started to get a taste for it, reloaded my save and tried again. 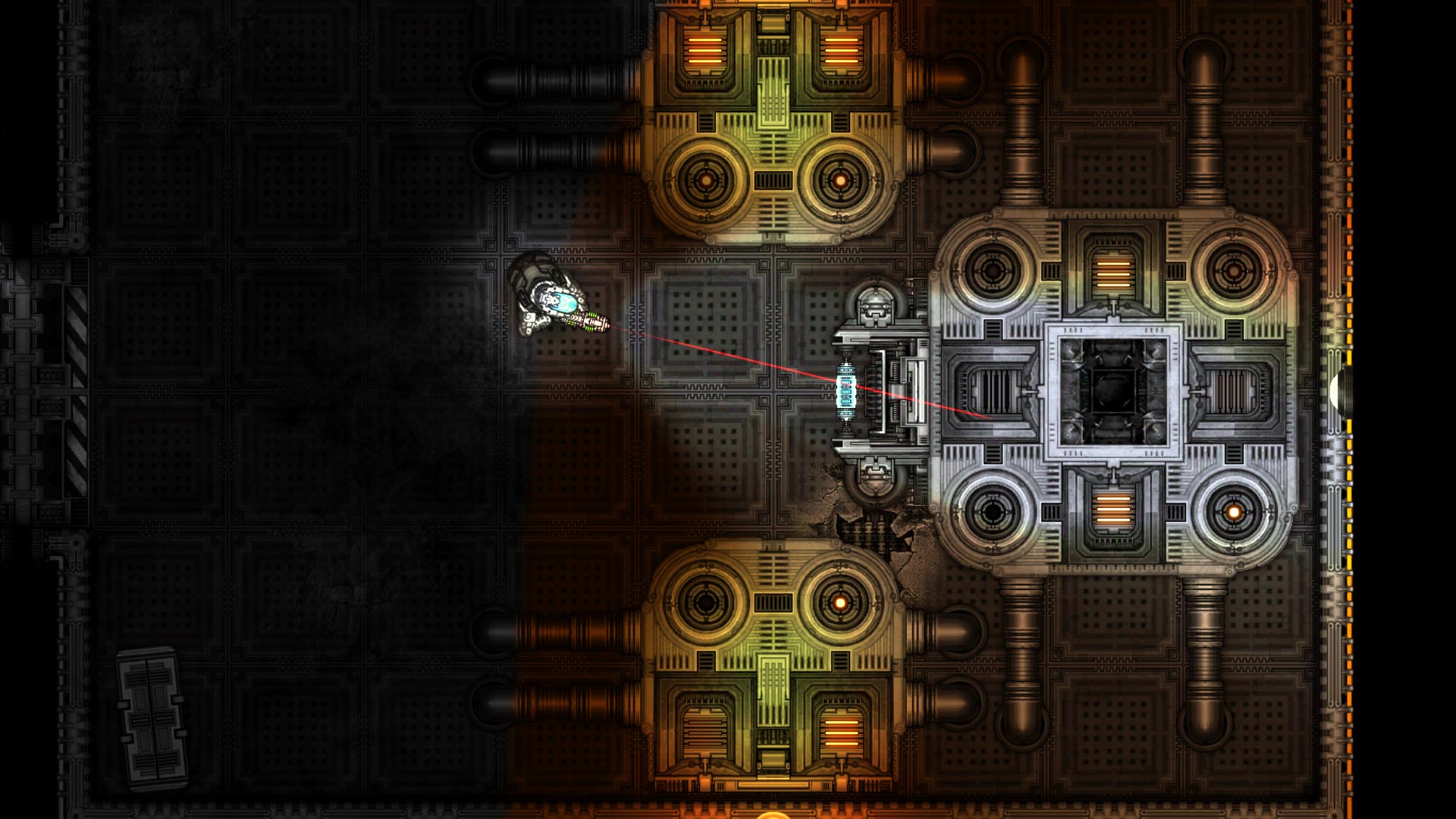 Slowly but surely I began fumbling around and uncovering new areas such as a research facility and an engineering lab. As I explored around trying to find intel and anything else I needed to survive, I began to encounter hostiles. The quality of the enemies in terms of appearance varied. Most of them looked gruesome and nicely animated, however there were a few that looked a bit cheap such as an alien jelly fish looking creature that was more or less just a few wavy lines.

The sporadic spells of combat were actually a lot of fun. There is a selection of different guns and melee weapons to find which you can assign to hot keys, allowing you to mix up which weapons you use as you fight. The use of the dash means that you can quickly dodge out the way of enemy strikes while attempting to do damage at close range. The deeper into the game you go, the more intense and frequent the combat becomes.

Clearly an impressive amount of thought has gone into this game’s design. There is a strong sci-fi influence throughout, incorporating elements like technology research, power management, transport. The colony has to be unlocked and conquered piece by piece in order to proceed.

As I made more progress I began enjoying the game, but I still felt a little bogged down in all the different survival mechanics. As much as I’m complaining I do think Subterrain is a genuinely good game and I’m sure there is an audience for this sort of deep, complicated gameplay, unfortunately it wasn’t my personal cup of tea. It’s not that I’m averse to these slower paced, more methodical types of games, it was just a bit too much for me.

The controls are a bit of a mixed bag. As far as the running and combat are concerned I’m totally satisfied. The two analogue sticks are used for movement and direction while the shoulder buttons are used to shoot and dash. When it comes to navigating the menus and inventory however, it’s a different story. I struggled through a lot of the recourse management side of things through trial and error, at times being completely stumped with what I was supposed to be pressing. I’m sure the developers did the best job they could mapping the controls, given that things can get quite convoluted. However, it soon becomes clear that Subterrain is probably a lot easier to play on PC with a keyboard and mouse. 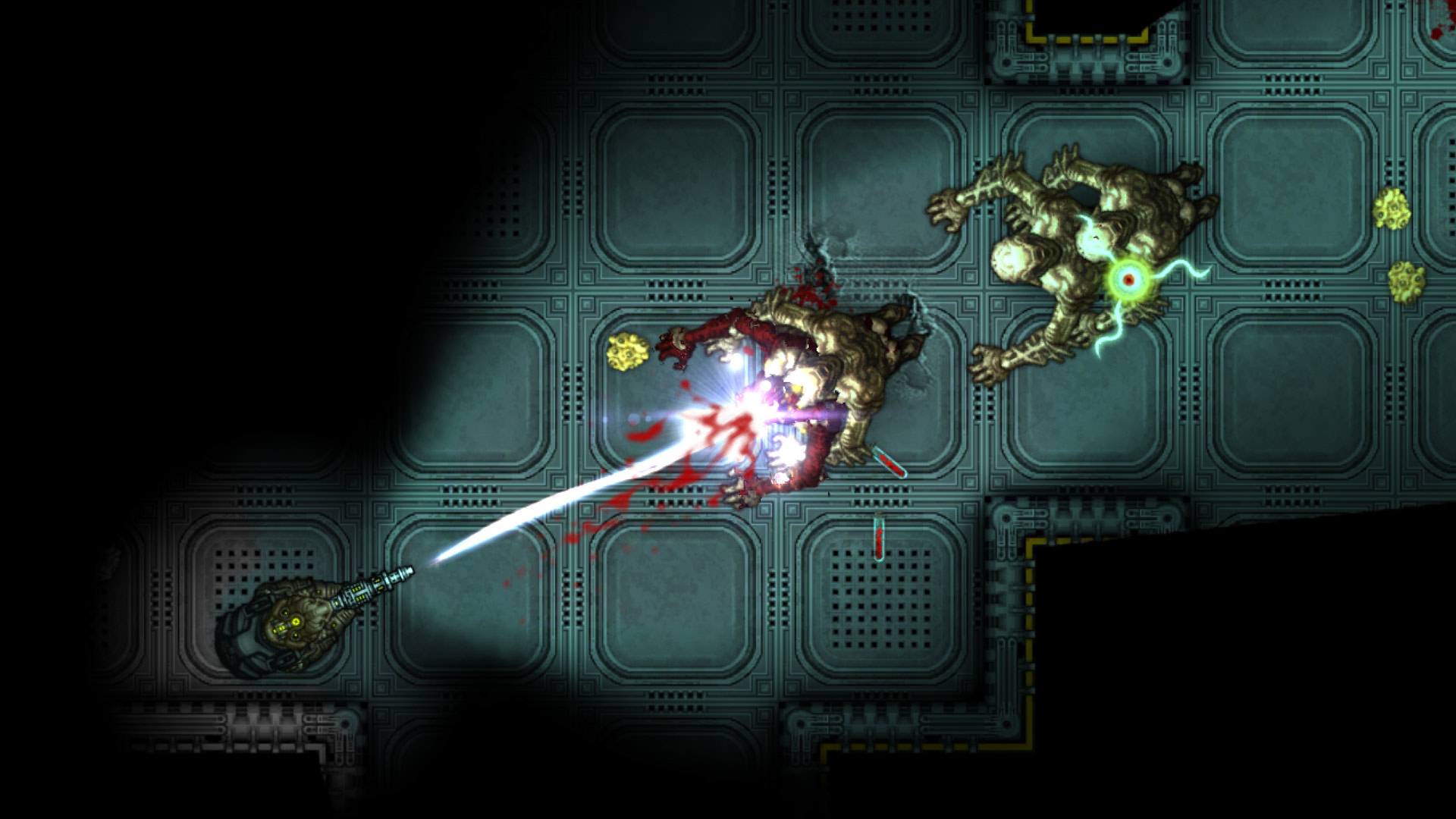 There is only one campaign mode, however when beginning the game there are a variety of difficulty settings to choose from, plus the option of permanent death for when you feel as if you’ve mastered it. One little feature that I really did like was that each save file had a separate slot for you manual save and your auto save. As a result if you find yourself in a situation where you saved the game in an undesirable place, you can always reload the auto save to revert back a step or vice versa.

Visually this game looks pretty good. The character portraits are drawn really nicely, the environments are clean and minimalist, the combat and gore are nicely animated and the overlaid visual effects help to create a horror atmosphere.

The only major downside to this game’s presentation was that I found the text very difficult to read. The font was pretty small and although I’d probably have no issue reading the text from a computer monitor right in front of me, I found it difficult to read from my TV even with my glasses on. There is a lot of text in this game between the instructions and all the various menus that you have to navigate, so this is a bit of a pain.

In conclusion, Subterrain is a good challenge for those who aren’t put off by slower paced sci-fi games. There is some action to be had here, but this is no casual experience. Trying to complete your objective while managing your status and wellbeing can get very intense at times. I’m hoping to revisit this one on PC at some point in the future to see if I can appreciate it a little better with proper keyboard and mouse support. Overall I think it’s a good game, it’s just not for everyone.