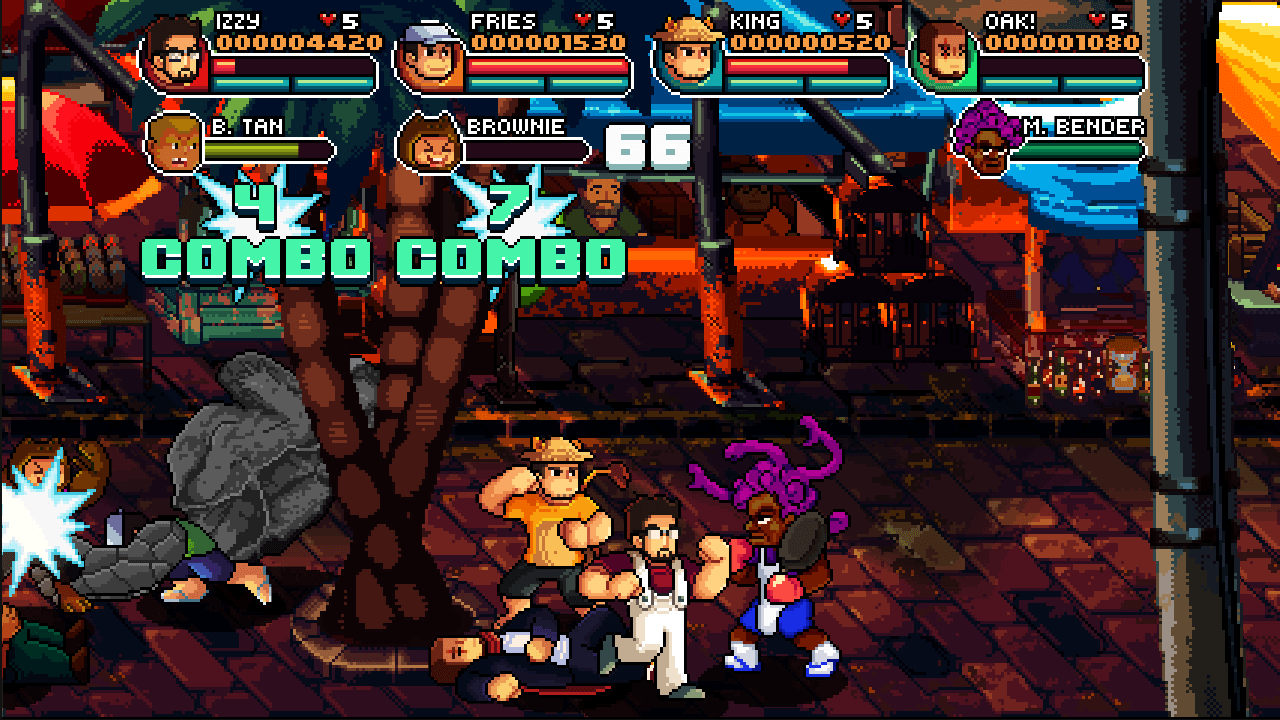 If you spent your younger days feeding quarter to an arcade machine, you’ll get a kick from the combination of 16Bit graphics and chiptune OST right off the bat. The story is your typical good guy versus bad guy affair in which you play a hero from a team of heroes dedicated to protecting a magical artifact that grants you 99 lives–hence the name of the game. The artifact has been stolen and it’s up to you and up to three friends, locally or online, to get it back. In fact, I played through the story with my partner; you can see the game in action in the video below.

The game can be played with keyboard or controller. I played with a controller; left stick or D-pad to move, A to jump, X to punch, Y to kick, and B to use your special elemental move. Combos are executed in the old school two-button fashion through a mixture of kicks and punches. Additional combos can be unlocked and can only be executed after you’ve purchased them.

At the end of a story segment, you’re able to use the points you earned by executing combos and picking up items to level up learned abilities as well as purchase new ones. You can also buy additional lives. Each character has combos available to them and each of those has three tiers available to upgrade. 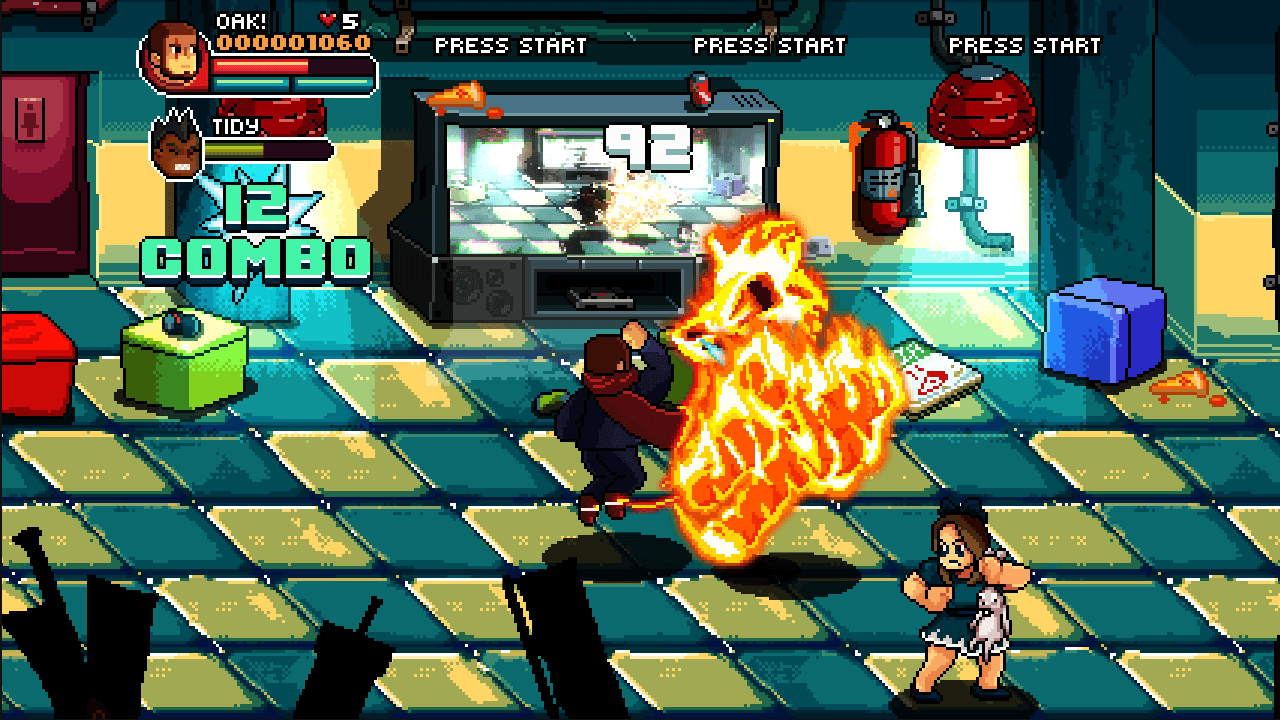 Currently, there are four characters available–Oak, Fries, King, and Izzy –and each has an element tied to them. The Steam Page promises 11 total playable characters pending updates.

There are six stages currently available and 4 different difficulty settings: “Izzy,” Normal, Hard, and Elite. I found normal to be adequately challenging, but hardcore brawlers may prefer to push their limits.

Each stage has its own theme, though enemies don’t really fit into them and tend to be re-colours of the same enemy. As you fight your way through them, you are rewarded with the points I mentioned earlier and also bits of story which are told in the form of dialogue exchanges between your hero(es) and the boss of the stage—a man or woman who is a member of a nefarious League. The boss fights are where combat shines because they’re challenging and mix up gameplay a bit as it becomes a matter of learning the enemy’s attack pattern and acting accordingly, but they’re few and far between.

Unfortunately, combat is hampered by a few major problems: 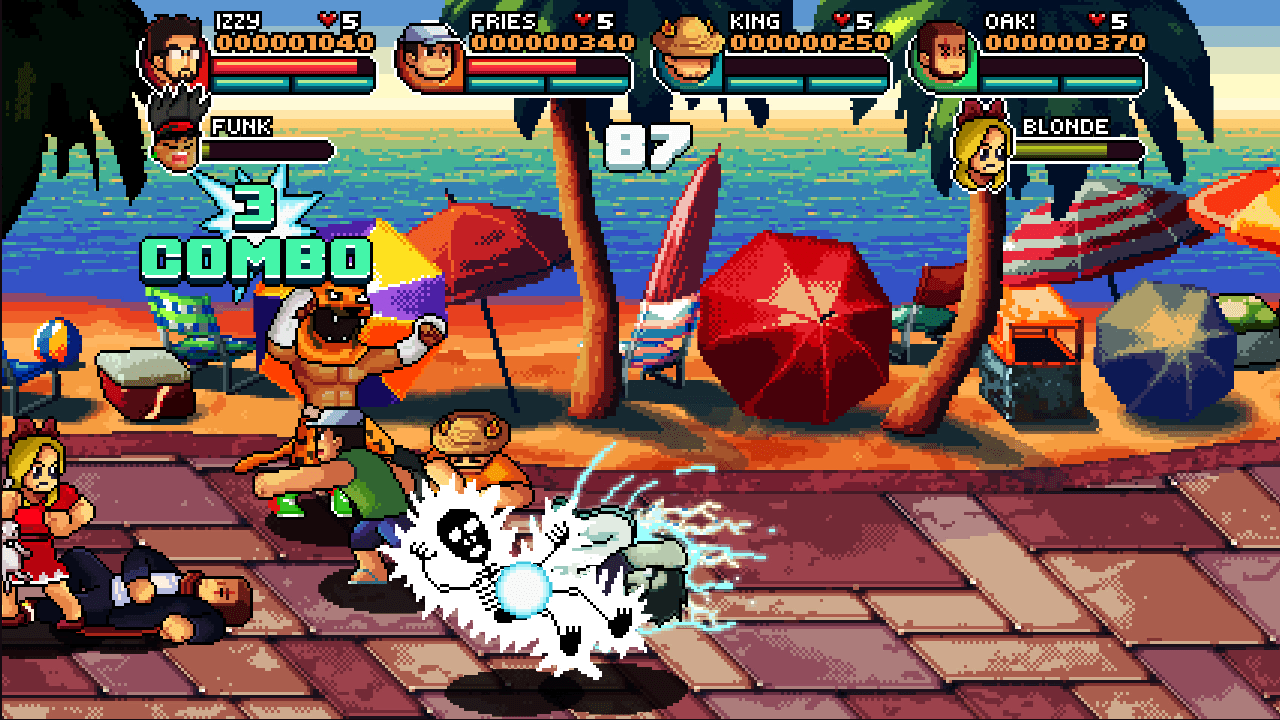 There’s also a versus mode, but there aren’t many people online, so keep in mind that finding a partner may be difficult if you’re looking for human opponents.

99Vidas is only a few tweaks short of a great brawler. Its presentation is fantastic and what it doesn’t have in fluid combat it makes up for in style.

This is a title to keep your eye on. 12.99 is a bit steep considering there’s still a bunch of content the dev has yet to implement, but it’s a solid investment if you’re eager to play right this very moment. There are achievements for playing through the story–which will take you anywhere from 4-6 hours depending on your difficulty level and skill–with the four main characters, but it’s up to you to decide if that will provide enough content to hold you over until more is released.