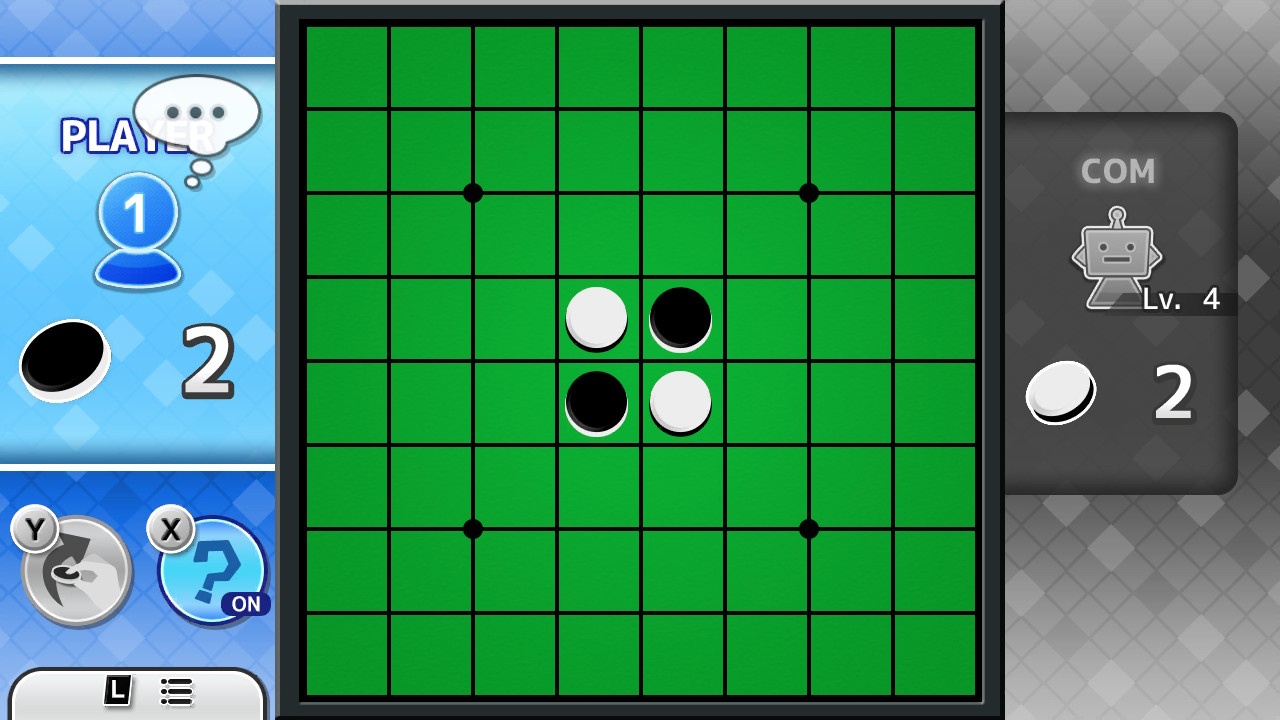 Othello is a simple title that delivers exactly what it promises. Being a near-launch title for the Nintendo Switch, it’s easy to dismiss this no-frills game as a cheap cash grab, but that would be a disservice to what Othello provides.

If you’ve never played the classic board game, the concept is simple: two teams place down opposing circular tiles (black or white) and attempt to dominate the board. Your objective is to take over the board by “outflanking” the other player, which occurs when you surround their piece with pieces of your own. Trap a white piece between two black pieces and you flip it over, making it black. Multiple pieces can be outflanked at once either horizontally, diagonally or vertically. When the board is full or one player cannot move any more, the game is over and the highest color count wins. It’s been played for over a century and enjoyed the world over.

Arc System Works’ version the Switch actually brings a good amount of gameplay to the table. Off the bat, you have the choice of either playing solo against the CPU or doing a one-on-one two player mode. The solo version allows the player to decide their play style (both Joy Cons or just one), scaling CPU difficulty from one to sixteen, and the option to be white instead of black, thus allowing the AI to start first. 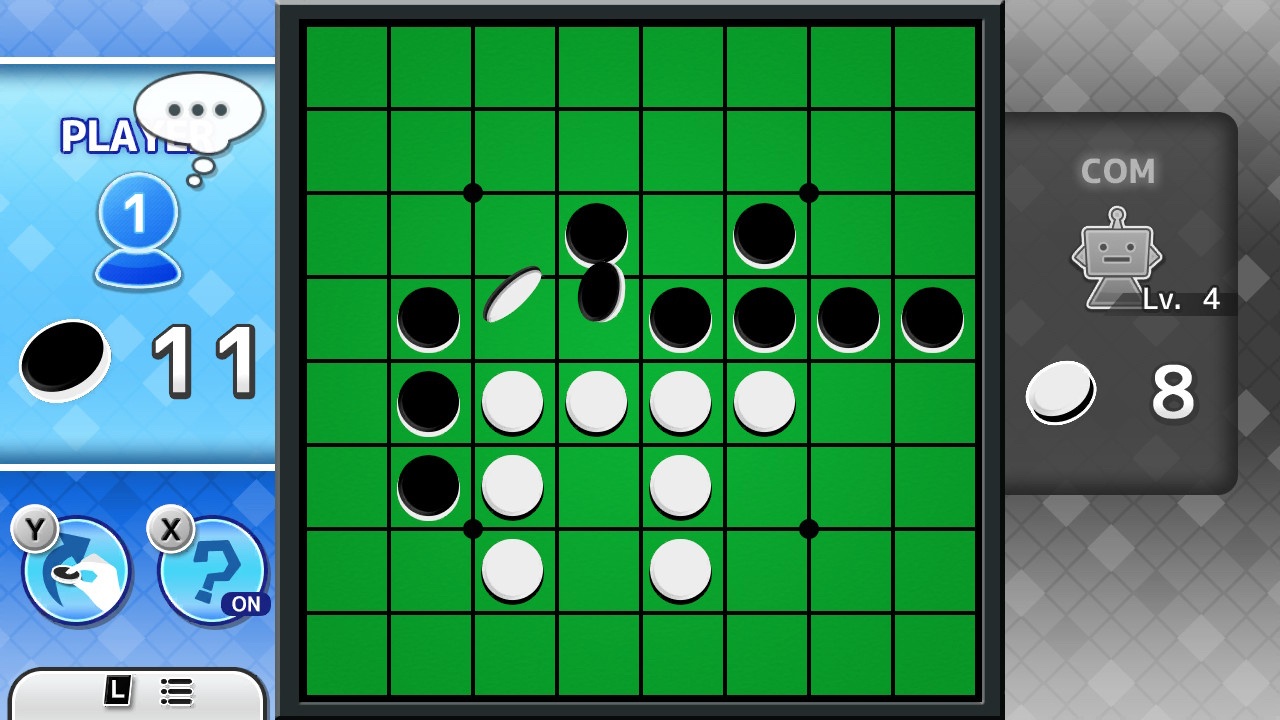 Besides using the joystick to navigate the board and A to confirm tile drop, you are allowed to use the touch screen interface, which gives great variation if you’re playing on the go or just want to go off screen. Additionally, the game does begin with placement hints on, where the board will highlight legal moves that you can make and the outflanking outcome (this can be toggled on and off with the X button). Lastly, the Y button acts as an undo to take back your last move if you’re certain you’ve made the wrong decision.

Being a relative novice at the game, I really enjoyed the range of difficulty offered, as level one could easily be played and beaten by someone who didn’t even understand the purpose of Othello. I think I found a sweet spot around level four, where I needed to consider moves and, more than once, quickly hit the undo before I saw the full extent of the damage I had caused myself. As an experiment, I did bury the needle and tried level 16, which showed me that the computer player could essentially lock me out and just run the whole board without me even taking a turn. Humbling and interesting, and not an experience I’d try again.

Two player mode offers some good variety as well. If you don’t mind being cozy with your gaming partner, you can leave the Joy Cons attached to the Switch and do a classic “play and pass” style of game. Or, if you need that competitive breathing room, disengage the Joy Cons and get ready for some intense, twin controller Othello action! Nothing really changed here from the solo gaming, save that, well, another person was involved. Additionally, the computer seemed fine when I took back my move, but human players could quickly get annoyed with the ease that you can mulligan. Not to mention you can undo an unlimited amount of times, potentially taking the game all the way back to the beginning no matter how long you’ve been playing. This could easily irk anyone. 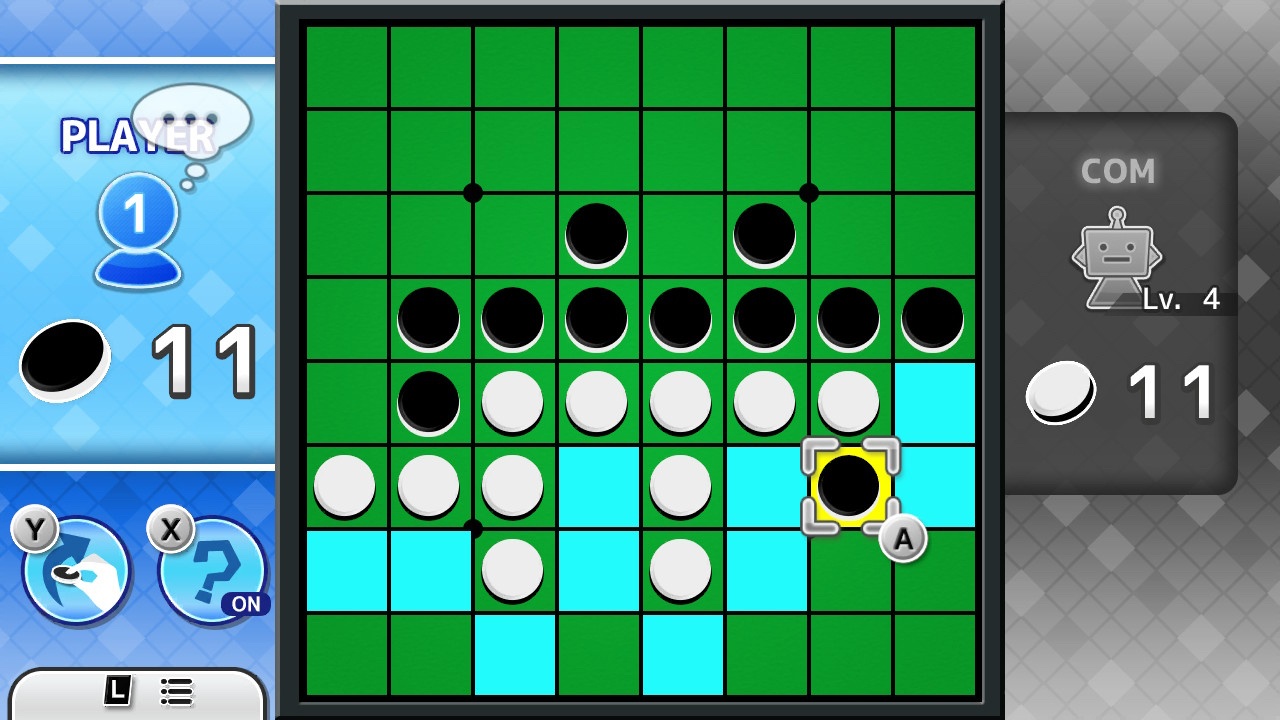 Outside of the game itself, Othello doesn’t offer any other large draws. It’s a snappy game, but I wouldn’t expect any less from something so simple. The music is elevator-esque and could be taken or left in any capacity. Since everything relies on simple English and pictographs, you could pick this up in almost any language and understand the interface immediately. Sitting at 109 MB, this won’t be a make-or-break addition to system memory or your microSD card, and I could definitely see picking up and playing this again whenever the moment arises.

At it’s core, Othello does a good job of being a solid board game on a console and it had the good fortune to be available early on in the launch of Nintendo’s newest darling. Though you may be turned off by the lack of extra content, at five dollars you really couldn’t go wrong if you’re in the market for some classic fun on a modern machine.