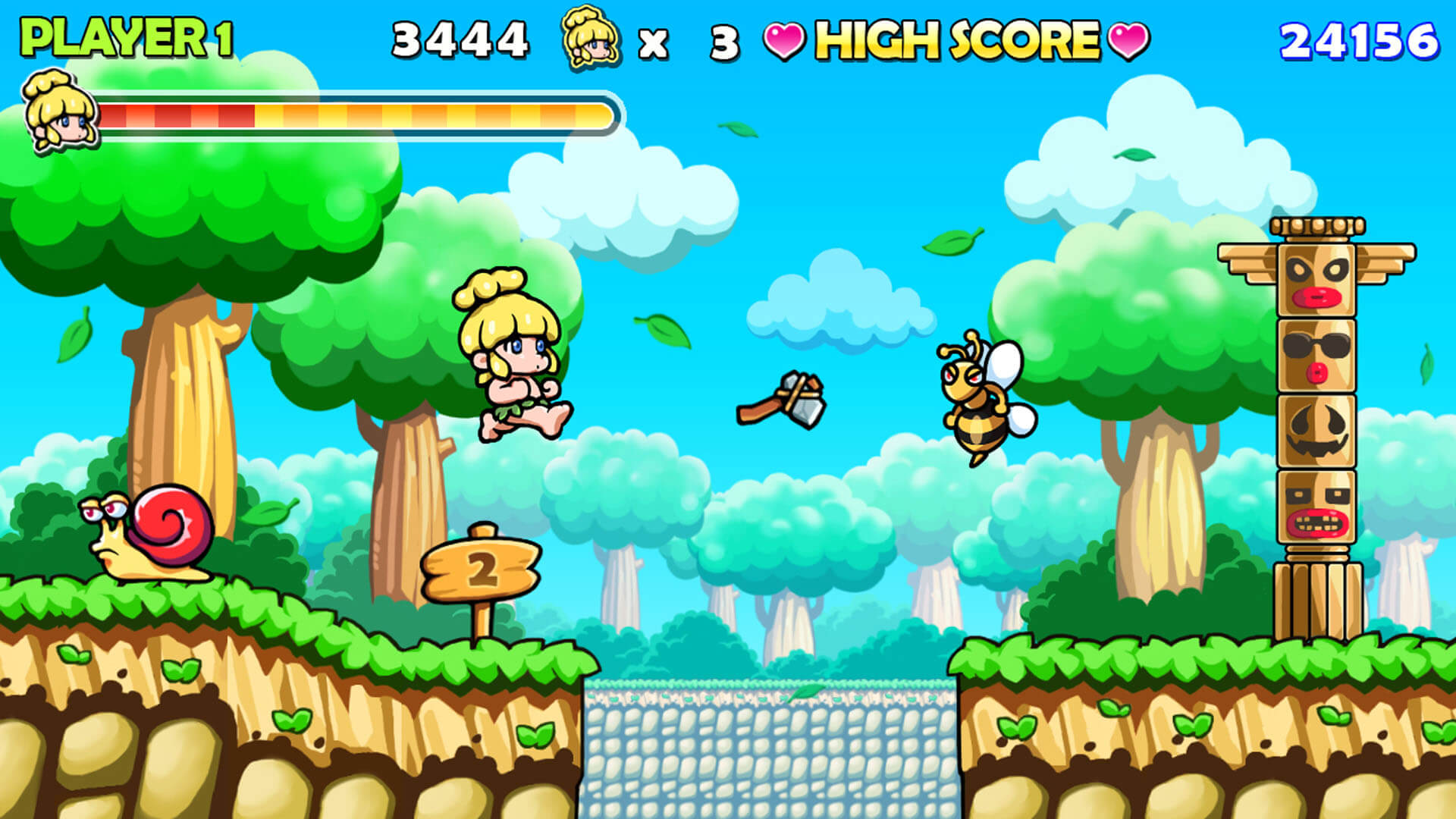 Wonder Boy Returns is a modern remake of a classic franchise, and its arcade roots on the Sega system gained a much-needed new coat of paint in this bright, shiny remodeled release from CFK Co., Ltd. Released on March 30th, 2017, for the PS4 system, this title was previously launched for PC back in October of 2016. But can a high-definition remake skyrocket Wonder Boy Returns into the spotlight, catering to both fans of the original releases as well as newcomers such as myself?

Wonder Boy Returns begins with a brief cut-scene style narrative about our protagonist, who apparently can’t be faithful to his girl, Tina. When a demon suddenly abducts her, Boy rushes to her rescue with promises of salvation. From there, it’s an HD fest of 2D, side-scrolling Platformer puzzles, dozens of food items (which players have to collect to keep their Food Meter up), and an array of enemies. With the remake, CFK Co., Ltd., opted to add boss fights at the end of each chapter, and each of them fits in with the overall theme of those levels. Chapters are divided into four sections, cumulating in that epic showdown, though each level is divided into checkpoints. Given that Boy has a one-shot, one-kill degree of squishiness, those mile markers are especially useful. 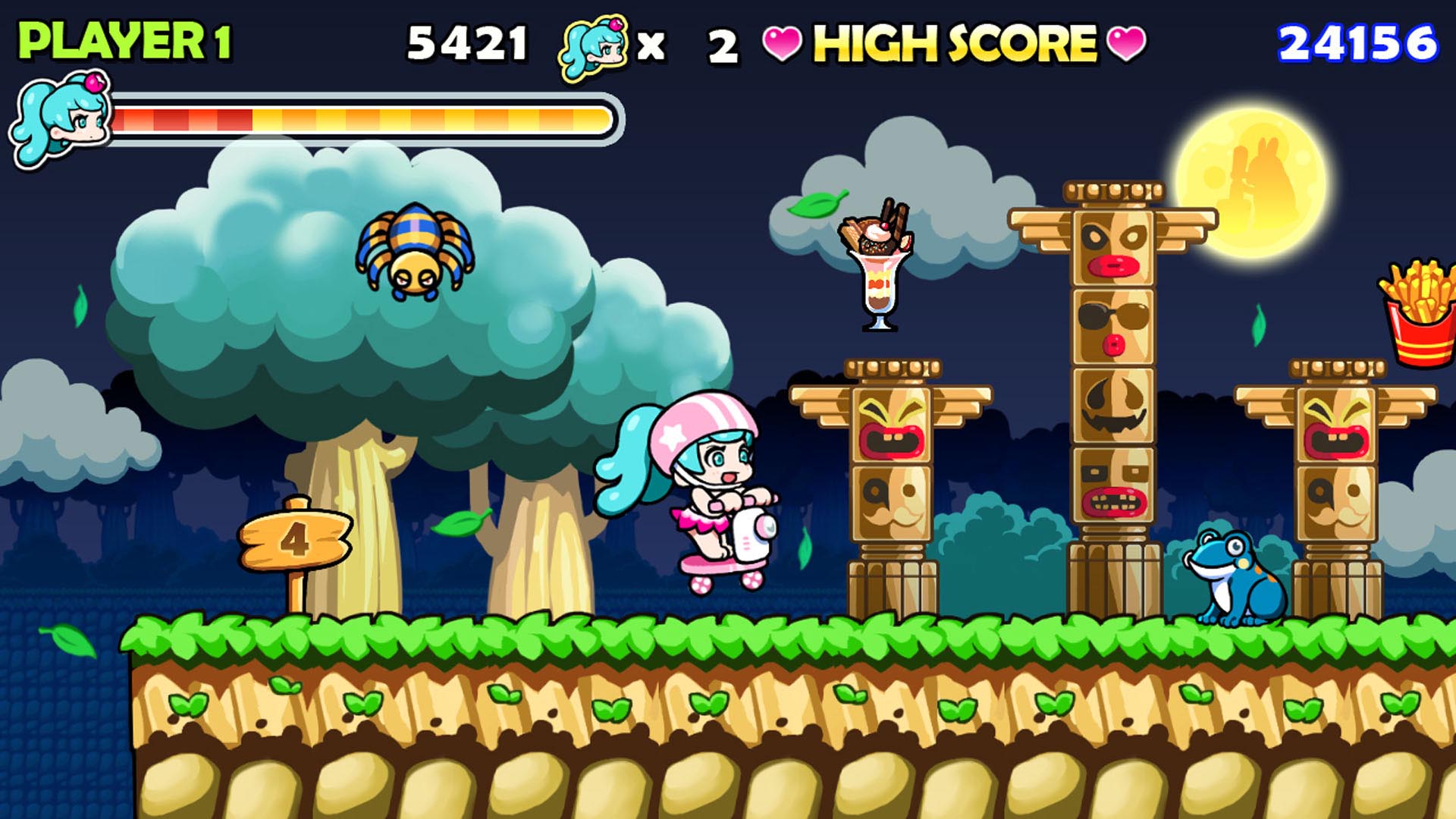 Players can decide on three standard levels of difficulty: Easy, Normal, and Hard, or even the Challenge (Classic mode), which pits them against opponents and challenges with a limited amount of lives to lose. Since each standard mode has a different volume of max lives available for the player – from 10 and counting down – it’s useful that lives reset after each chapter in that trio of difficulties. There’s certainly a learning curve, and I found myself surprised at how much I struggled to complete levels reminiscent of my earliest years in gaming. But the level design is fun, and I enjoyed the clean, Retro-licious graphics that were honed for a new generation.

Players can eventually unlock Tina as a character option, in addition to a pixelated Wonder Boy from yesteryear, but these features don’t do a lot for replay value. Going through the levels a second or third time, or just changing up the difficulty and the wrapper of our hero, doesn’t lend enough to make it a viable boost in replay potential. The motivation of a higher score that drove so many players in long-ago gaming arcades doesn’t translate the same on the PS4, and Wonder Boy Returns doesn’t have the added appeal of a Platinum option to keep players coming back for more punishment.

Still, there’s something nostalgic about these remakes, and Wonder Boy Returns does what it set out to do well: Recapture the charm and challenge of the original series and wrap it up in a package that feels like a modern adaptation. The music seems a bit overbearing, but there were a few tracks that I enjoyed; I also never encountered any bugs or glitches, making this a very polished addition to my PS4 library. I love the variety of the food encountered, from gourmet–looking desserts to simple fruit and vegetables, and the addition of power-ups like helpful faeries and skateboards were a welcome break to the general monotony of Platformer puzzles. I had a particularly hard time mastering the spring platforms, which just goes to prove that it’s been far too long since I broke out my Sega Genesis and rekindled some of my old, obsolete gaming skills. 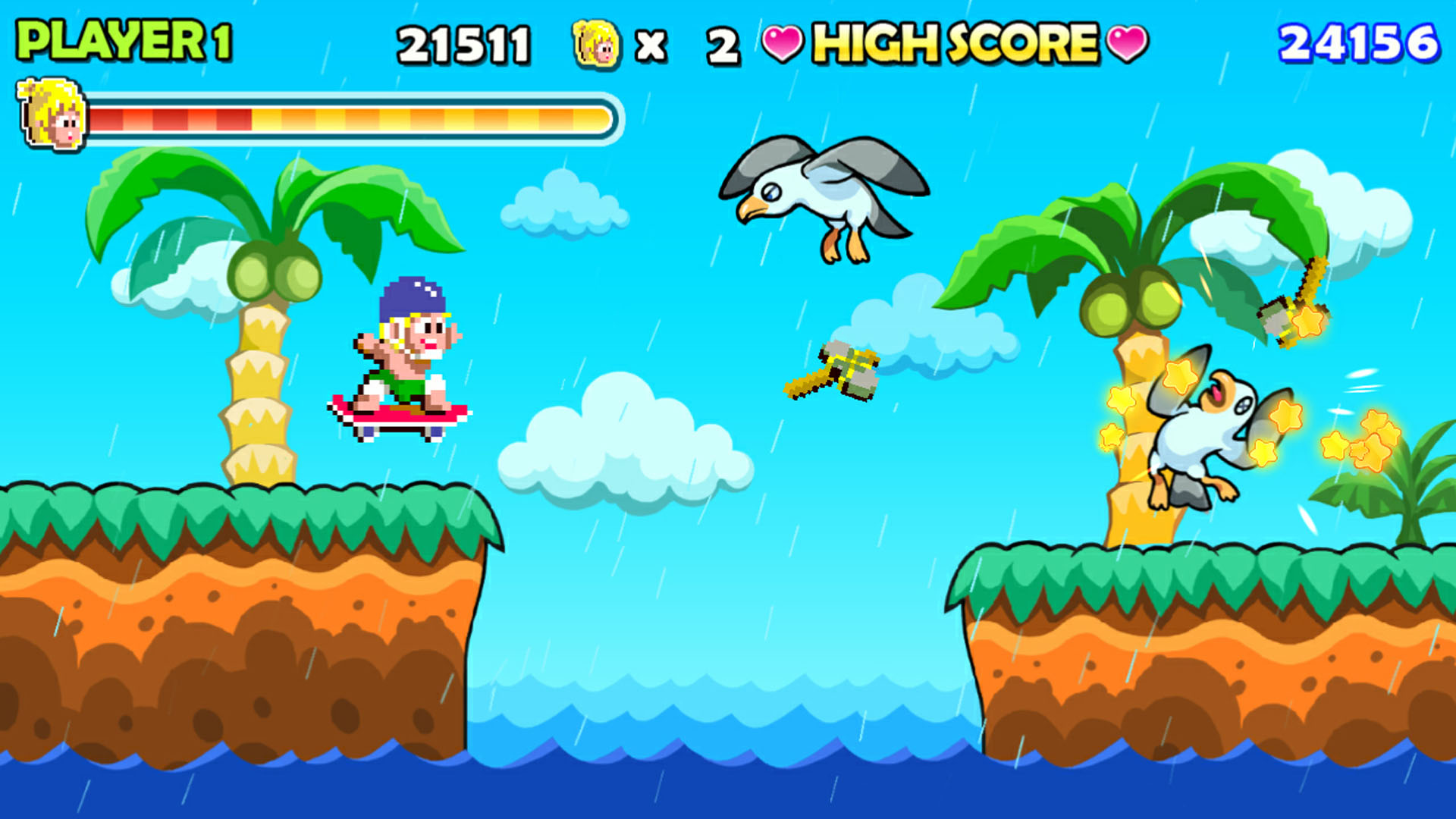 There is a lot of Retro charm to Wonder Boy Returns, and it’s obvious that this title has been recreated and remastered by developers who appreciated the qualities of the original Wonder Boy titles and their era. There is a variety of terrain and enemies, plus hidden Tina dolls that you can collect in each chapter to increase your score (and improve your Platformer street cred). The world of Wonder Boy Returns can be punishing, and I certainly got frustrated more than a few times with the one-shot-kill dynamic of Wonder Boy Returns. And yet, that in and of itself is reminiscent of the highly challenging Sega Genesis titles of my youth.

The implementation of boss fights lends something to the Wonder Boy Returns gameplay, and I think that it gives more appeal to a classic title remade for current platforms. While I believe that fans of the series are the most likely to eat up our adventuring caveman and his cliché-but-cute abducted girlfriend, my experience in Wonder Boy Returns just made me wistful for other vintage franchises that I would love to see remade. That’s not to say that I didn’t enjoy my time in the various levels present here, but I found the replay value to be minimal after I had bested the hardest, most fearsome baddies that Wonder Boy Returns had to offer.