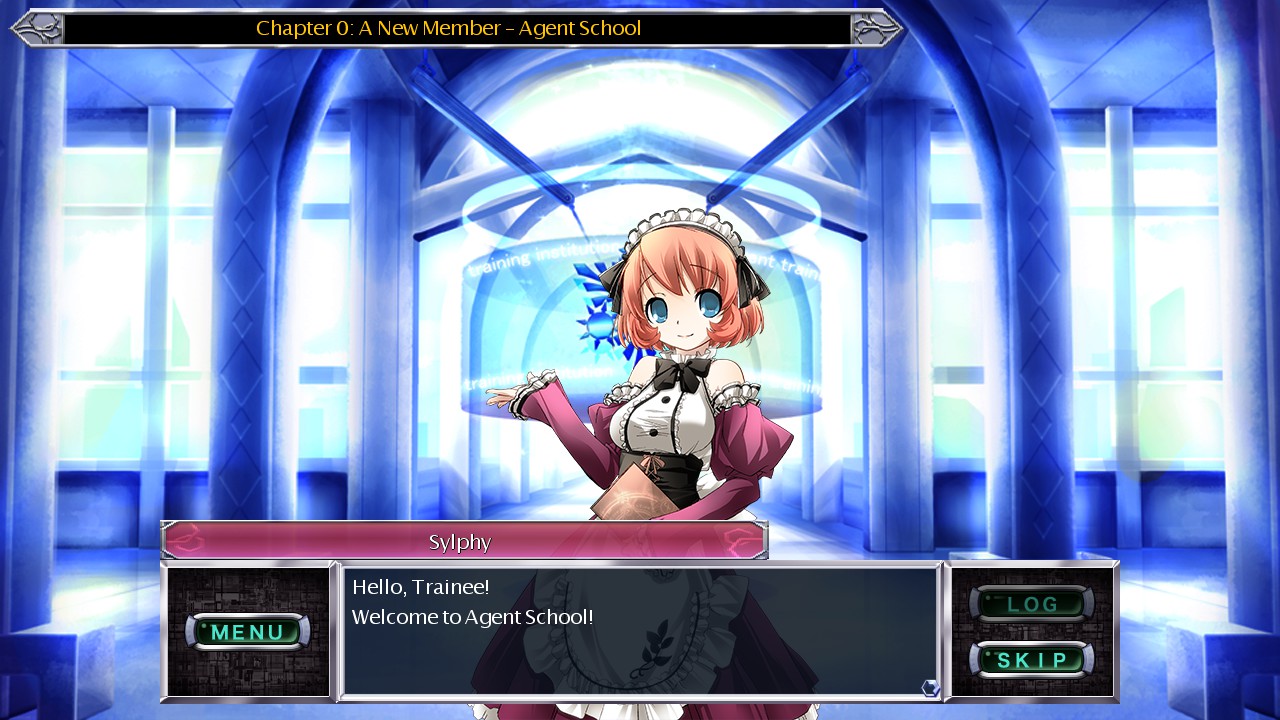 Eternal Destiny plays like a simplified version of Yu-Gi-Oh. While its simplistic nature may not appeal to hardcore card game fans, the in-depth, fully voice acted story, hundreds of different cards to collect and evolve, and anime art style may appeal to fans who also like visual novels, those looking for a more casual experience, and beginners seeking an entry point into the CCG genre.

The story, and the reason you’re card battling in the first place, is that you’re a brand new Agent, one of many such individuals working together in order to keep the world safe from utter destruction. As an Agent, your main objective is to find the Infinita Sacrament, a fabled object that has the power to change the world.

Eternal Destiny is by no means a complicated card game. Your deck can have a maximum of 20 cards, which is rather low by the standards of the genre, and the playing field has 10 tiles–5 on your side and 5 on your opponents.

Your cards fall into one of three factions–Demons, Kells, and Cybers–and the tiles will fall under those three, plus a neutral category. Placing a card on these tiles will affect the card’s strength due to the factions’ affinities with each other.

The affinities prevent you from simply filling up your side of the playing field as placing the wrong card on the wrong space will weaken it significantly.

At the beginning of a match, the computer randomly decides if you will be first to move or first to draw. There are pros and cons of both: if you move first, you are able to set up your cards right away; if you draw first, you’ll have more cards available to you on your first turn.

Cards cost mana to place and also to attack, assist, and evolve. Mana regenerates every turn.

Attack: Attacking is done by dragging your card onto an enemy card or empty space. The former will pit those two cards against each other; if your cards arrack is greater than the enemy’s HP, that card will have one of two results:

You’ll attack the enemy commander directly if there are no cards on his or her side of the field.

The enemy commander will select one of his or her cards to defend them.

If your attack is greater than the enemy’s HP, not only will the other card be destroyed, but the excess damage will be inflicted to the enemy commander. 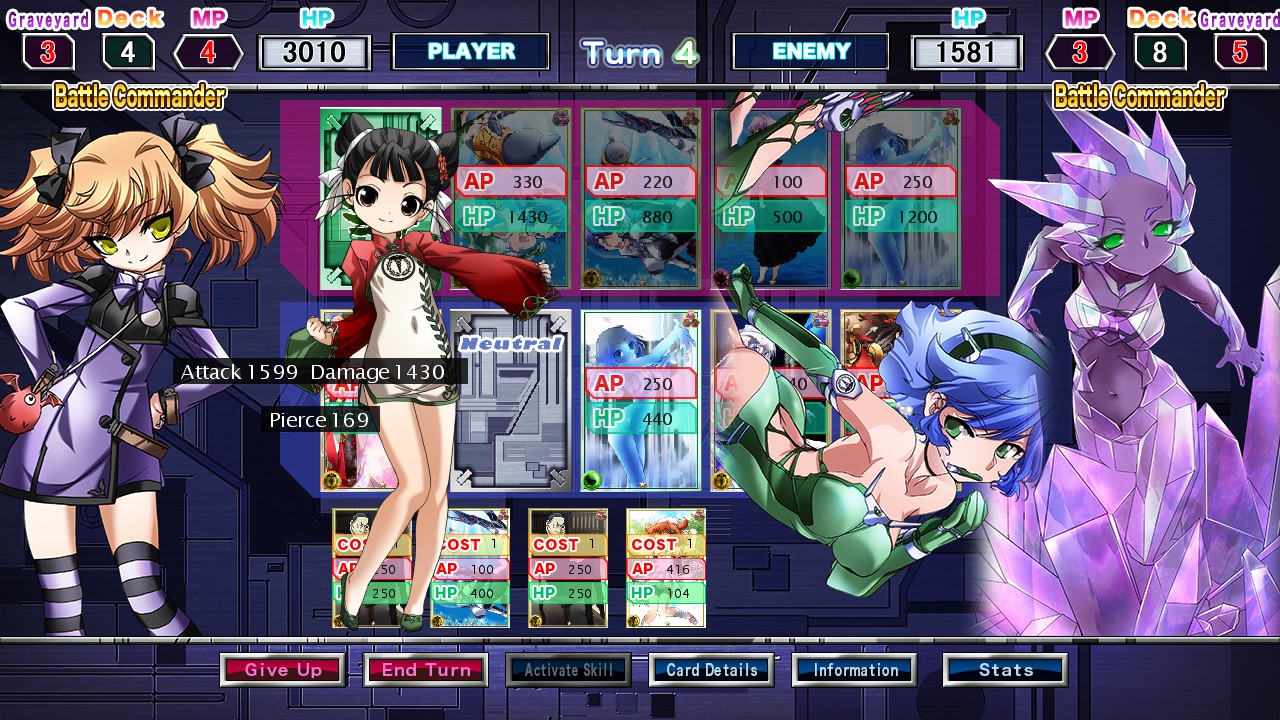 Evolution: Evolution occurs when you place one of the same card on top of another on the playing field. Cards that evolve increase in Attack and HP, but also change in appearance. The majority of the lower tier cards simply change in colour, (hair, clothing, etc.), but two star and greater cards become entirely different characters. More often than not, they’ll just change colour.

Assist: Assisting boosts a card’s strength by placing a different card on top of a card on the playing field. Affinities come into play here as perfect matches will give a greater boost than a mismatch.

Use Skills: Each card has its own active and passive ability. Active abilities can be used during your turn and your card goes into standby after using it. Passive abilities activate once certain conditions are fulfilled.

In some ways, Eternal Destiny feels like a mobile port. There’s a daily log in, a shop that uses in-game currency in order to increase your chances to recruit characters and regenerate stamina in addition to buying card packs, and the majority of battle is played via dragging and dropping. This isn’t a problem, per se, but it’s something to think about.

Story mode: Play through the story. Battles will occur between story sections and your battle commander is chosen for you and you choose from one of three base decks to start with.

Dungeon mode: Explore one of three styles of dungeons.

This mode requires you to hit a “proceed” button, which will prompt an animation as though you’re walking. This faux-movement also requires stamina, which can be restored with items you buy in the cash shop or by leveling up via experience randomly found while wandering.

Online mode: Play against your friends or random people. You have the freedom to choose your own battle commander.

Note that, while the game does offer ranked matches for those who enjoy that sort of thing, a small player base means you’ll likely be confined to playing solo.

Dungeon Mode: Explore one of three styles of dungeons. This require you to hit a “proceed” button and will make it seem as though you are progressing through an on-screen motion. The difference between this mode and the other two is that you can recruit cards to add to your deck. This faux-movement also requires stamina, which can be gained through items in the cash shop or by leveling up from experience randomly found while wandering. 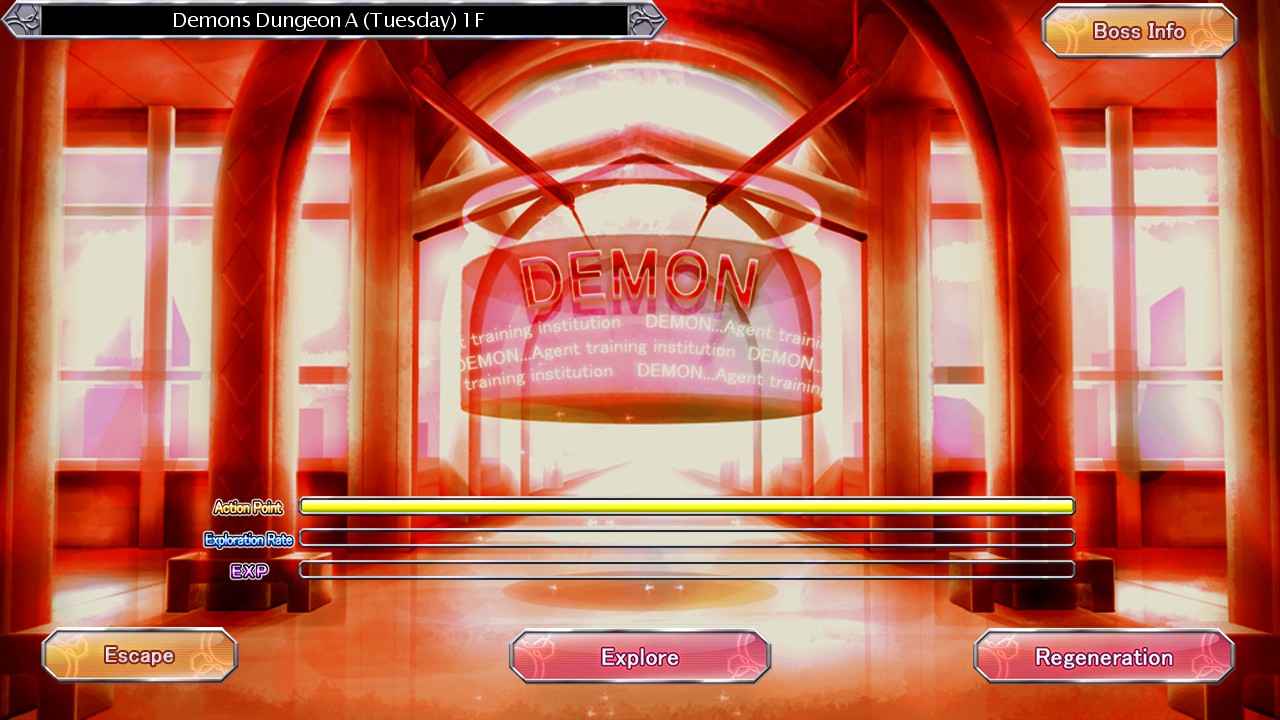 Eternal Destiny is a competent blend of CCG and VN. The A.I. is prone to stupid moves especially if you’re got the advantage and so battles tend to be brief without any fear of the tides turning against you. Still, if you’re looking for a card game to play casually when you have some down time or a visual novel set in a fantasy world that just so happens to have a card collection element, this game is a solid investment.