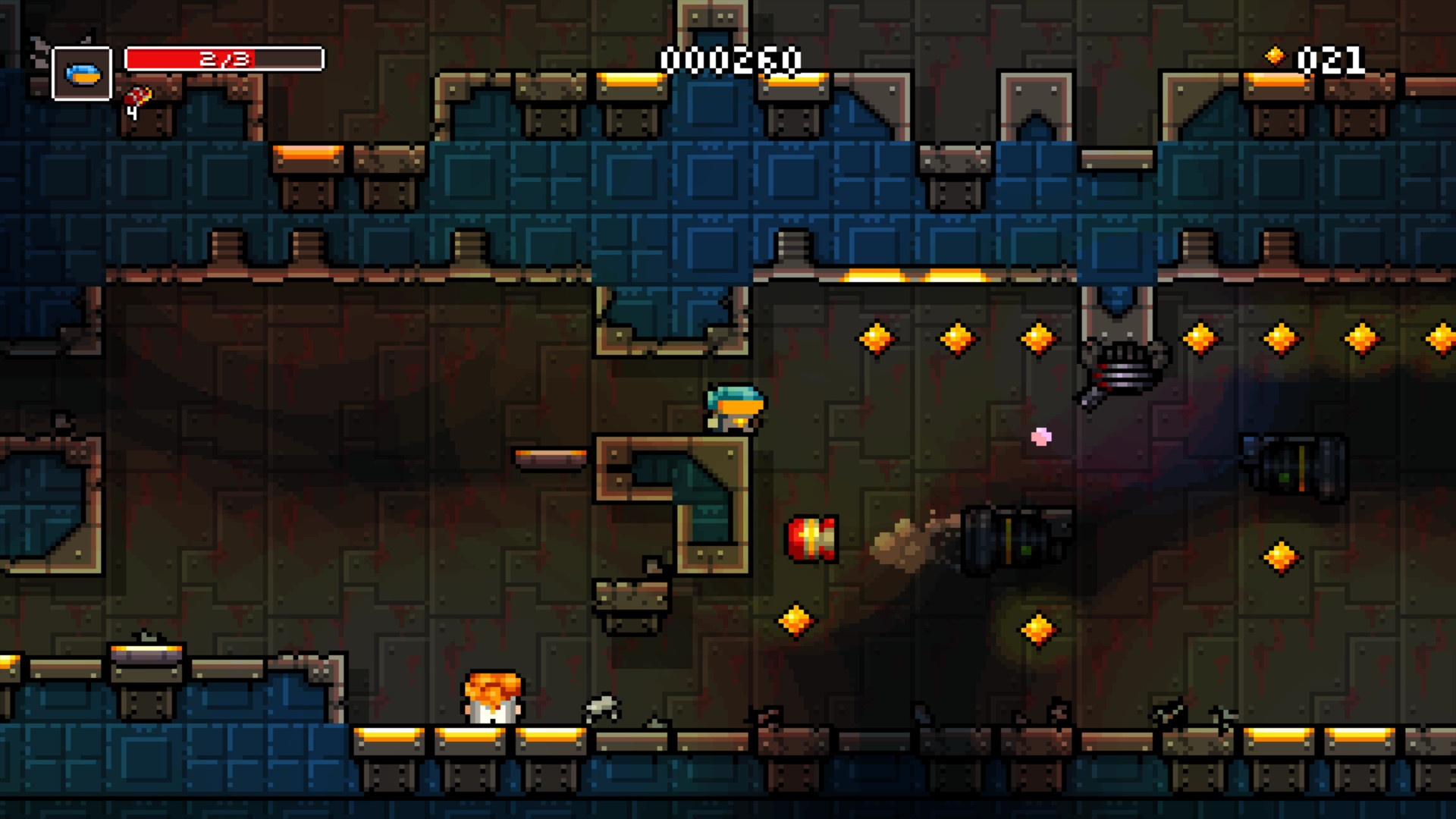 Meganoid is a rogue-lite platformer that takes place on a malfunctioning spaceship somewhere in the deep future or past, depending on how you interpret sci-fi. The technicians, wary to risk their own lives, instead send a made to order cyborg on a quest through the ship to find and fix any and all systems as you journey on to eventually discover the main cause of the mayhem. Along the way, you can pick up any number of randomized powerups strewn about, as well as collecting gems that can be used to purchase additional items should you be lucky enough to find a store.

It should be noted that the Meganoid you see on Steam today is far, far different from the original that was released over six years ago on iOS. Through from the same developers, this Meganoid is a completely new experience that has very little to do with it’s predecessor. Our protagonist looks more acceptably like a robo-clone, the atmosphere of each level is more attuned to the setting and the game itself just looks better. The stages are massive compared to what they used to be and the game isn’t a thinly veiled speed runner disguised as a platformer. In fact, this will be the last time we compare the two: they’re leagues apart and only a shared name and developer link them.

Out the gate, Meganoid isn’t interested in telling you exactly how to play or what to do. After the scientists give you a general rundown, you are teleported to the first stage and, presumably, will suffer your first death in seconds. A single hit will destroy you, initially, at which point you’ll respawn approximately where you fell and have a couple moments of invulnerability to get situated. Three deaths and you’re out, at which point the scientists in charge shrug and produce another robot. There’s very dry humor floating about, and it lends itself well to the game. And, for folk who are tired of prolonged hand-holding in their games, Meganoid does them service by severing the hand as quickly as possible. 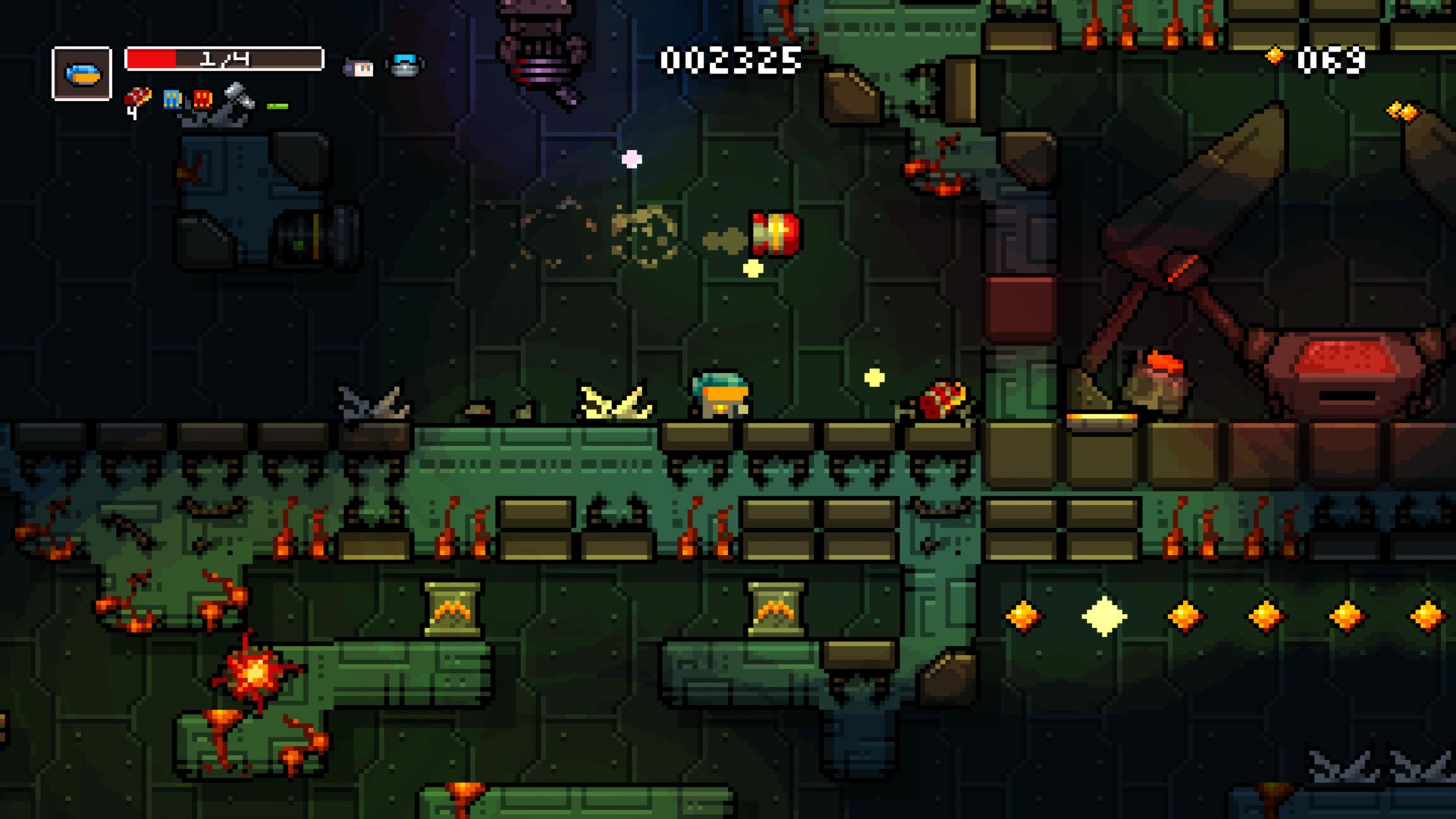 Controls are fairly simple: one button to jump, one button to toggle through your items that you collect and one to activate said item if needed. You’ll start with a pack of detonators which can blow up enemies as well as most walls and floors. It’s a pretty handy tool to begin with, as you quickly find that procedurally generated stages can sometimes leave you with dead ends that are less-than-fun to backtrack. I never encountered a stage that was impossible to reach the exit, so at least that was taken care of. As I went on, worlds changed, and I was plunged into semi-darkness, went underwater and journeyed through a cave. The worlds themselves seem to appear at random, so I couldn’t even prepare myself, mentally, for what would be happening next. Certainly not a complaint: if a game is going to be rogue-lite, going all in is a great approach.

I had no problems moving my little robo-dude about the worlds, and even swimming came very naturally. I liked the fact that it wasn’t announced I could cling to ledges, but I found out through sheer luck when I was just shy of a jump. Meganoid does reward your patience and accuracy, and I found myself acting fairly deftly to avoid laser beams, spikes and berserk security drones. I just had to be careful every time I found a new item: the description for what it did would flash across the screen and, if I was caught in a moment, I might mash a button and dismiss the summary before I fully understood what my new item did. And they will not tell you again should you find it later.

The items themselves should also receive some recognition. Besides the gems that pepper the landscape, you will occasionally find either keycards or barrels (I think they’re barrels) with accessories inside. The keycards are invaluable, often giving you one-off chances to either “hack” a system, restore your lost lives or upgrade one of the items in your possession. The hack I found strange, because, as long as you got the keycard, you could preform it at the end of the level. But when you hack a system (example: making the lasers fire slower or platforms take longer to fall) a voice announces “SYSTEM UPGRADED” which…it’s a hack? As for the other two keycards, they’re great as long as you can find the station where you use them. The helplessness of having a red keycard, only having one life left and not seeing a red machine anywhere is indescribable.

As for weapons and accessories, it really is a case-by-case situation. I found a visor that allowed me to view secrets but never really found any secrets. I got a jetpack, but it didn’t activate when I held down jump, instead mapping to the “use item” button, which meant I jumped to my death before I figured things out. I did get a super helpful EMP, which knocked out all lasers around me for a short period of time, and a glowstick, which only lit up the area for a very, very short time, despite what the description of the item professed. I was fortunate to eventually get a blaster, albeit with limited ammunition, because, until this moment, the only way to deal with enemies was Mario-style jumping. I’m sure it’s possible to play the game all the way through without items, but they really can make life significantly easier and they give you more and more options as the game progresses.

A note for achievement hunters: Meganoid has a fair number that also require a LOT of playthroughs to finish accordingly. The diamond collecting achievement, for example, requires 5000 stones, and my first run I picked up maybe 30. The game, to its credit, will let you know how far you’ve progressed with each achievement at the end of the game, though this may come across as annoying or even condescending to players who had a particularly bad run. 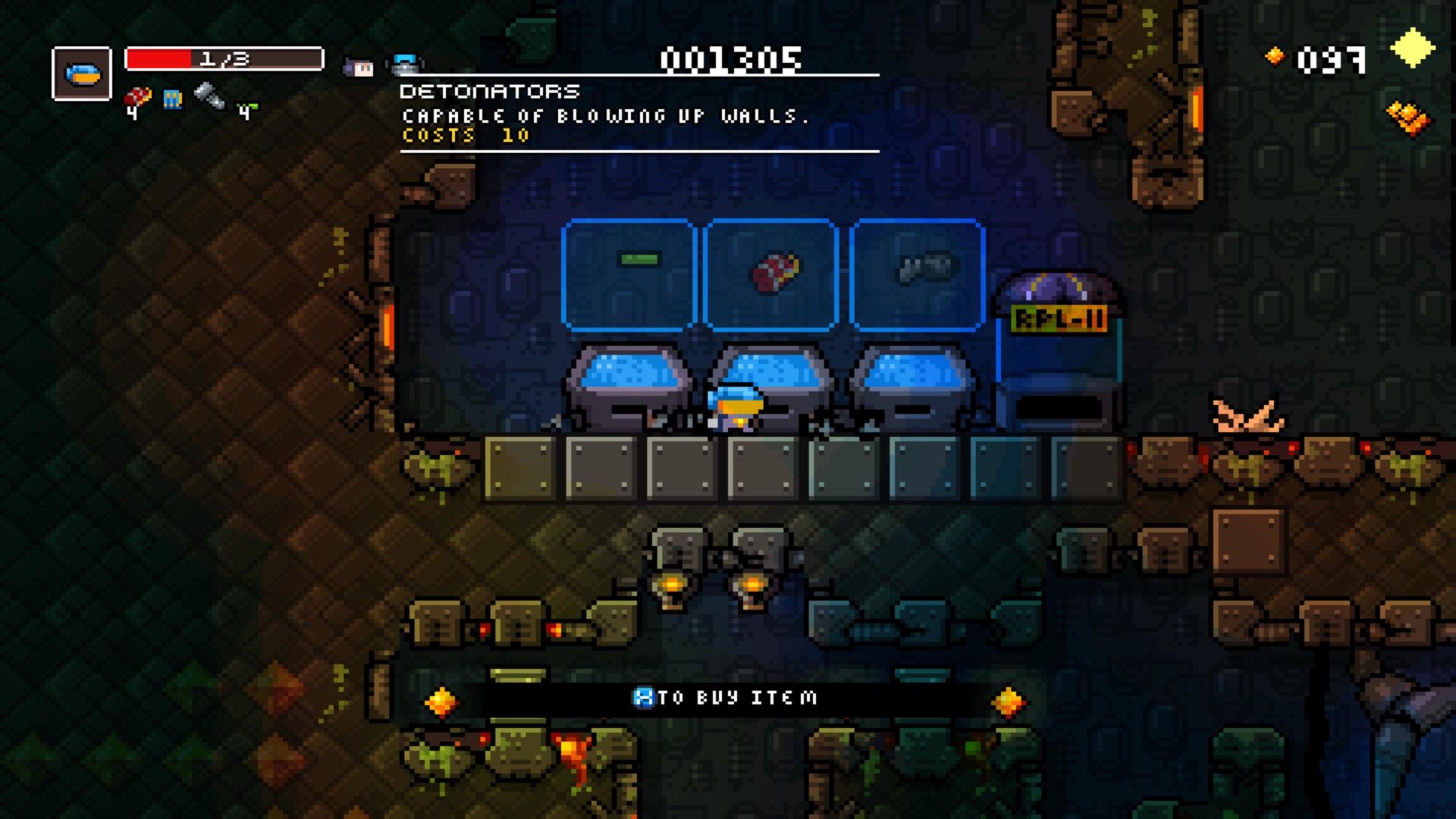 Ah, the potential for a bad run. The appeal of Meganoid can also be its downfall. Rogue-lite is a great approach to making sure that a game appears fresh and new regardless of the number of times you play it, and positive experience with the RNG can lead to a powerful and positive run. if the numbers are not in your favor, however, you end up frustrated and dying before you even reach the first level endpoint (which does net you a slightly sarcastic achievement). Sometimes failure comes simply because of a roll of the dice and not because of your own skill, something players may find disheartening.

My other major grievance is that all the items collected do not stack. Though you keep them with you for duration, you must manually toggle and activate each one as you seek to use it. At one point I had a magnet that drew all gems (and some robots) to me and I wanted to clear a large jump with my jetpack. In a perfect setting, I would fly across the sky, drawing in riches like a Scrooge McDuck vacuum cleaner. Instead, I had to decide whether I would be poor or risk my neck with the fall. I lost a life but got some good loot, but I shouldn’t have needed to pick one or the other.

At the end of the day, Meganoid is a really enjoyable and engaging platformer that is easy to pick up and play for short spurts or long investments, depending on how you’re feeling and how generous the game is. I applaud OrangePixel for what they’ve done here, and it’s crazy to see what they originally started with and what it ultimately became. Additionally, for five bucks this is a good investment for an afternoon and weekend and, for completionists, this very well may make your week.