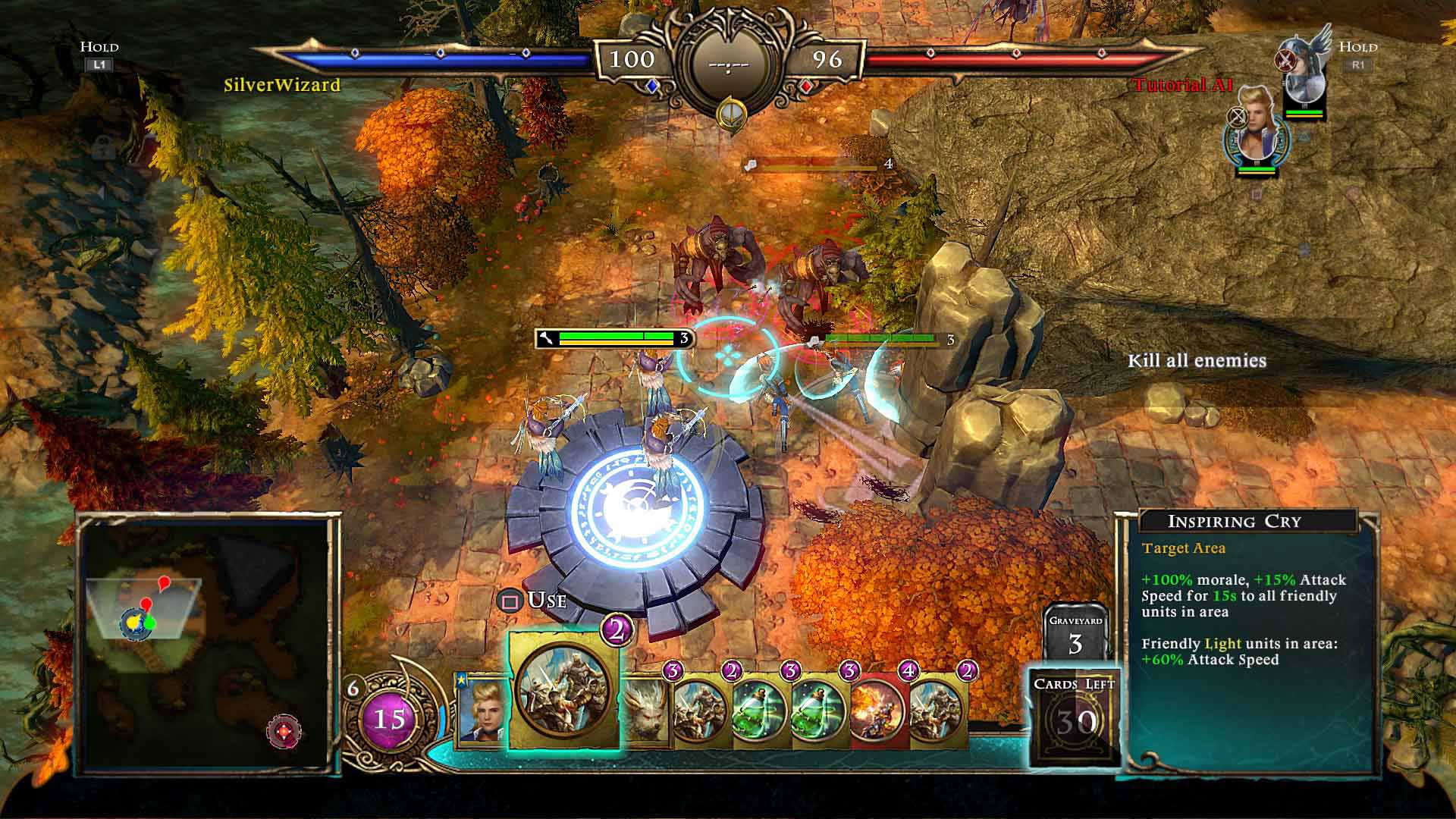 Oh ArmaGallant: Decks of Destiny, what potential you have. As a fan of card games like Magic: The Gathering, all decent real-time strategy games and of course, video games, the idea that ArmaGallant might combine these three things into a singular experience is certainly appealing to me. Unfortunately though, the more I played, the more I couldn’t help the feeling that a poor pricing strategy and lack of day one content looks set to ruin the party. Whilst I say that, there is a great platform for expansion here, and I hope to be proven wrong, so why not read on to find out if ArmaGallant could be for you?

ArmaGallant begins with one of the least engaging tutorials that I’ve ever come across, and that, aside from the ability to play single matches against variable AI opponents is the sum total of single player content. Unlike the Magic: Duels series that at least features light story campaigns and puzzle scenarios, ArmaGallant is pretty much exclusively multiplayer, but that is at least where the most interesting content is found, so it’s not the end of the world. Multiplayer games comprise of one vs one or two vs two matchups and the game features only a couple of maps, so it’s easy enough to get up to speed on.

So what’s it all about? Well, players build a deck of twenty cards from an opening pool, and then deploy them in a battle that plays out somewhere between an RTS and a MOBA. The objective is to run the other teams life total down to zero, and to do so players must gain control of strategically placed monoliths, whilst also defeating enemy units. As time ticks by, players gain the energy needed to cast spells from their hand, which take the form of units, healing items, direct damage spells and buffs or similar enchantments. When a unit is cast onto the battlefield, it can be directed as per any other RTS, and will fight and capture on behalf of the player. 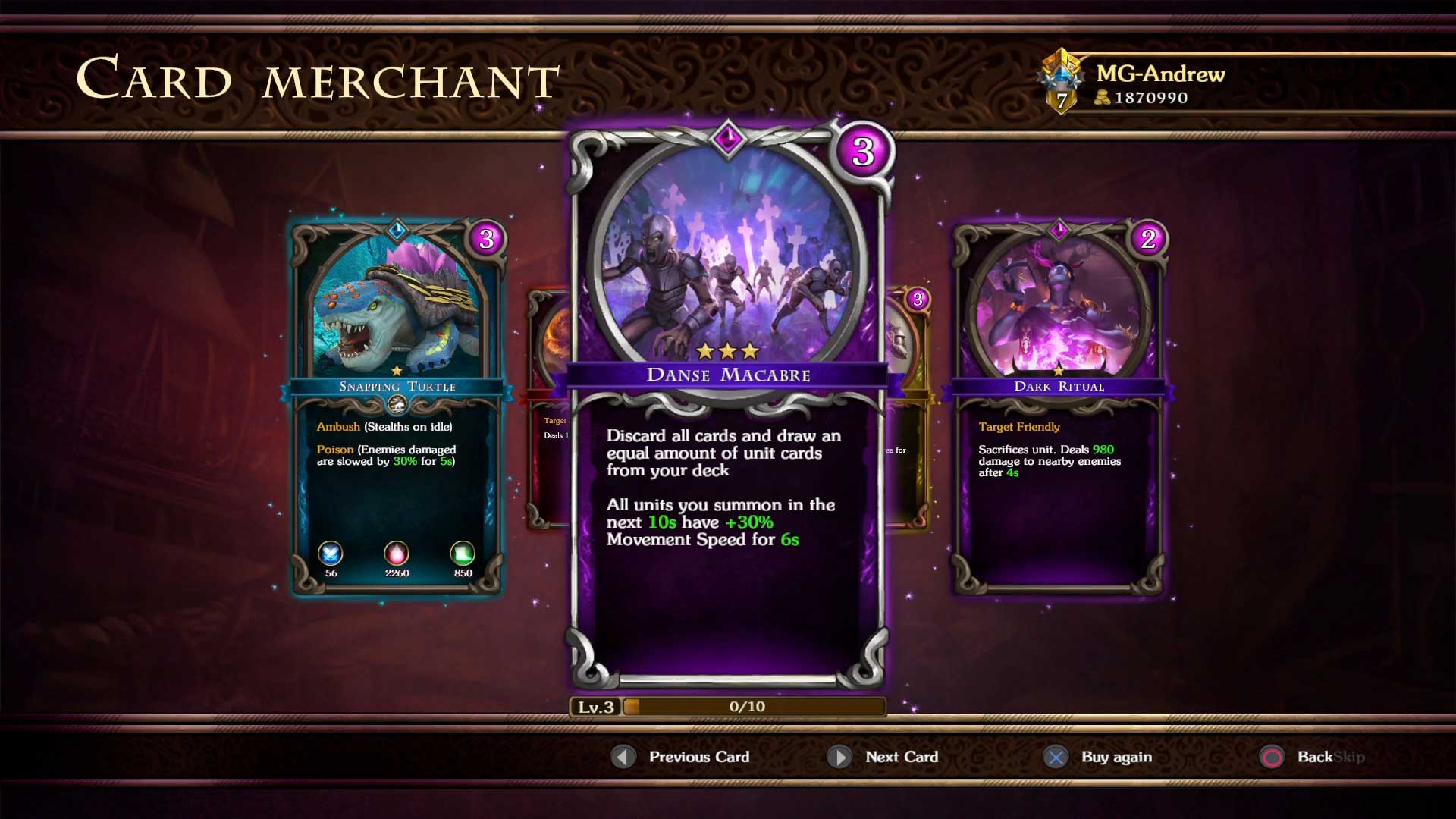 This mechanic leads to fast and furious gameplay that has a genuine ebb and flow to it, especially when the teams are well-balanced. As in any good deck building game, it’s entirely possible to build a deck designed for balance and flexibility, or to specialise around one or two specific creatures or themes. I found myself drawn to some of the bigger, more powerful creatures, and yet this presents a tactical problem in itself because they are much more expensive to cast, leading to early game stalls. Another tactic I enjoyed was creating a team of cheap, highly mobile creatures to achieve the exact opposite of that and outflank my opponents by snatching unprotected monoliths.

Although these mechanics are fundamentally sound, and quite enjoyable, there are some gameplay issues. Cards in hand reside in the centre of the screen and aside from those with distinct artwork, they can be hard to tell apart. There are other user interface issues too. The tutorial basically fails to inform players of anything useful, such as how the players energy pool regenerates, or where units will spawn in when cast. Once cast, units are controlled via a novel selection method that involves holding either the L or R trigger and then a corresponding face button to select a unit portrait.

Outside battle, the only thing to do is organise and configure decks. You can save up to three different deck configurations, and each deck contains twenty cards. You can have multiple versions of the same card, and when you cast a unit card that is already on the battlefield, a more powerful version of the same unit is spawned, rather than a second instance. This is another tactical nuance to consider, and an interesting feature. Booster packs expand the players card pool and can be bought for one thousand in-game coins, that in turn can be bought for real money, or earned by competing and winning matches. 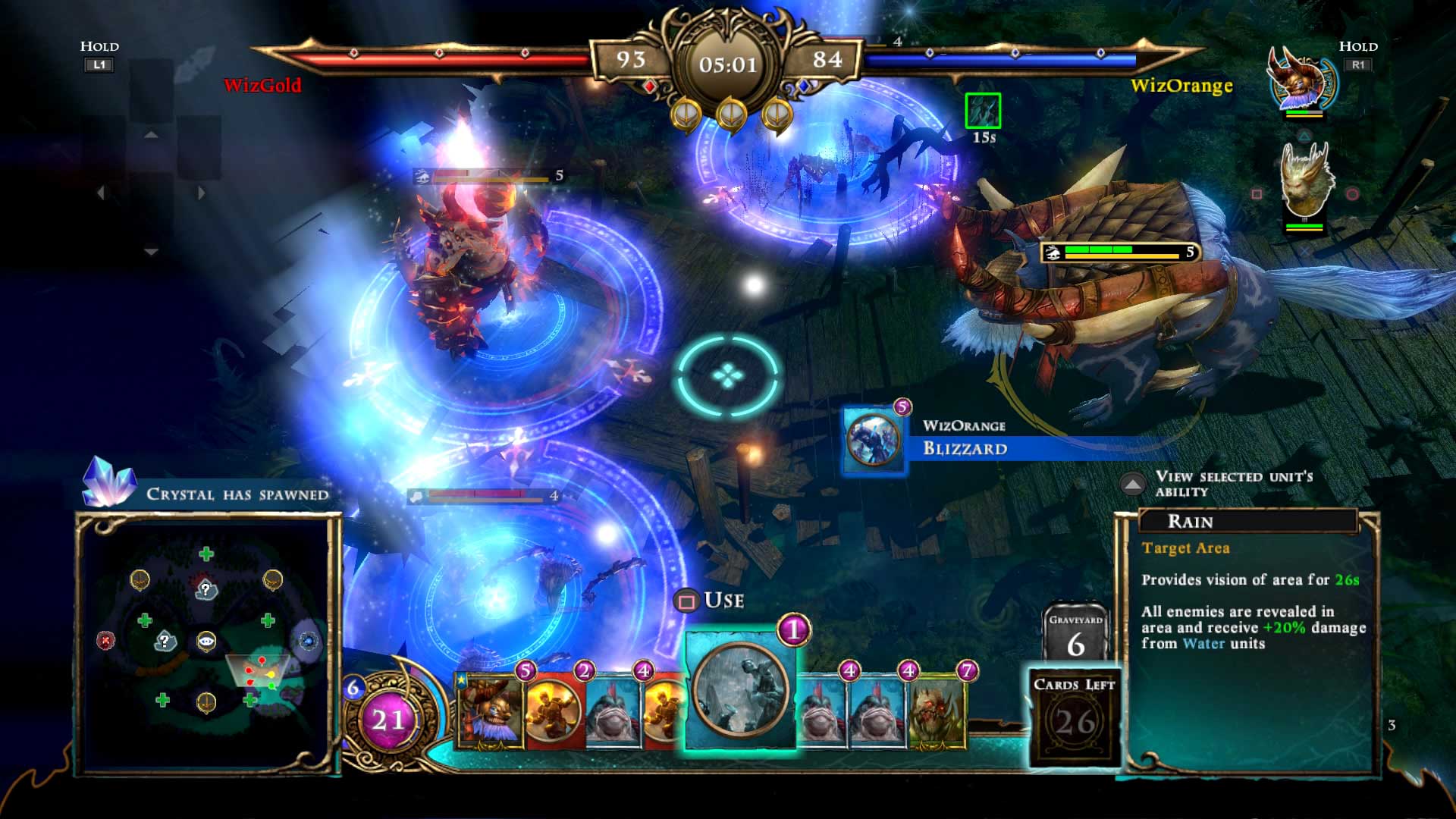 Whilst on the subject of micro transactions, they are perhaps the biggest issue I have with ArmaGallant. The game offers very little content as it is, with only two maps, a limited card pool and nothing to speak of in terms of additional modes. To begin with, an asking price of £19.99 seems high, but to cut in micro transactions as well is a real kick in the teeth. Games like this survive based on retention of a loyal user base that ultimately grows as the game’s popularity expands. I can’t imagine ArmaGallant will ever reach an audience large enough to generate that kind of interest, simply because the barrier of entry vs the payoff is completely unbalanced.

With a number of rapidly deployed patches and a change in pricing strategy, ArmaGallant could be capable of making the most of the interesting concept that it is built upon, but as it stands I don’t see that being possible. It looks and sounds fairly decent, but it lacks visual clarity, and the deck building element is filled with generic creatures and skills like flying, or the ability to apply stealth. It just doesn’t live up to expectations.

So there you have it. ArmaGallant: Decks of Destiny is very likely going to be a game that you should avoid, even if you are as big a fan of games like Magic: The Gathering as I am. The hybrid of deck building, RTS and MOBA gameplay is quite unique, and could only be achieved in a video game, but it is let down by almost every other feature of the game. From the crazy pricing, to the uninspiring creatures and the complete lack of solo content (or really, enough content of any kind) there just isn’t enough here to pull players in.