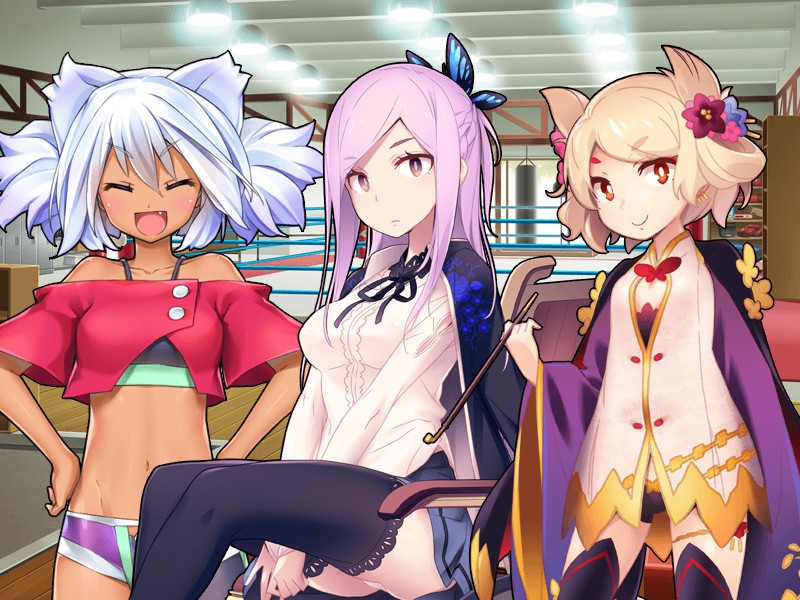 Cherry Tree High Girls’ Fight takes a cast of anime girls–some familiar and some brand new–and locks them in competitive combat that is a little too reliant on luck. This VN style simulation game gets repetitive very quickly–random event (or not)>talk to girls/visit locations (or not)>train>a day passes; after enough days, a tournament is held–but it’s still enjoyable in short bursts.

You don’t need any knowledge of the developer’s previous game, Cherry Tree High Comedy Club, to be able to get into this game, but the majority of the draw to this title, fan service aside, is likely from preexisting fans. If you’re new to this world of cute anime school girls and simulation management, this may not be a good introduction as the fights–the whole point of *Girls’ Fight*–can be extremely frustrating.

The game can be played with your keyboard, but as with most VNs, using your mouse is most likely the more comfortable option. When you start the game, you are introduced as the new gym teacher and the school is conveniently getting ready to throw the first Girls’ Fight in three years. Guess whose very first assignment is to be the manager of a team of your choosing in a no-holds-barred 3v3 combat?

After naming yourself, a genderless, faceless plot device, and selecting your traits–passive abilities that will change the frequency of specific events–from a list, [Name], a familiar face from CTHCC, acts as your guide, providing you with a list of candidates to choose from. She advises that you create a balanced team in which the fighters compliment each other… but seeing as there is no information regarding which fighting styles or classifications work well together, it’s really just left up to choosing the prettiest girls. That feels like a lost opportunity, but given that this isn’t a brawler, the girls’ disciplines serve as nothing more than fluffy information meant to round them out.

The majority of gameplay is spent interacting with your team of three in the following ways:

Call In:  Speak to each of your girls at the expense of AP. This can be done once every day if you have the points for it and each topic, chosen from a list, will help you learn something new about the girl in question. Whether this information is important to fighting is debatable, but being friendly with the girls means you’ll be able to massage them. Where you choose can have positive and negative reactions.

Massages are scripted events that allow you to indicate with your cursor where you’d like to administer your attentions. 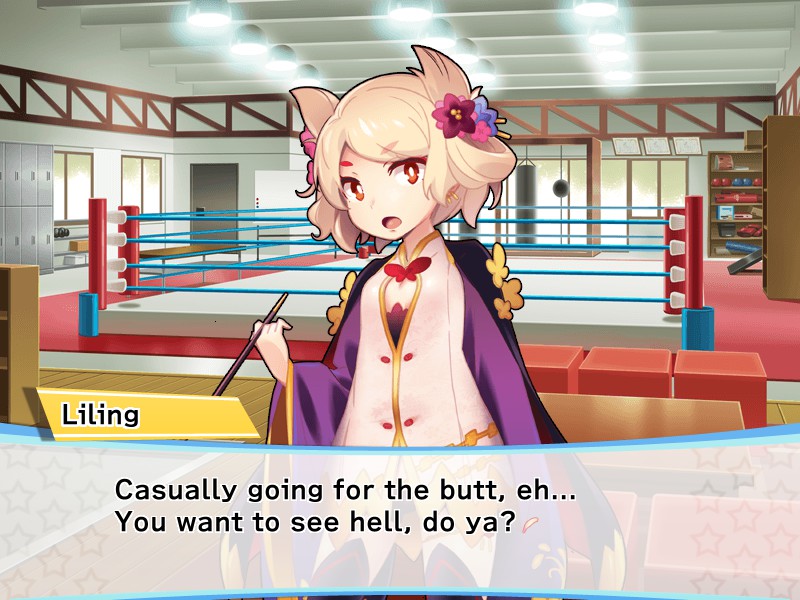 Move: Move allows you to select from four areas on campus and hear the latest gossip. There’s nothing terribly interesting being said, but you can unlock new topics to discuss with your team.

Manage/Train: These are separate commands, but they are complimentary. Managing the schedule of your girls allows you to assign three tasks for that training session that will either raise stats, teach the fighter a new move, or allow her to rest.

At the beginning of the day, you check in with the girls to see how they’re feeling. Using that information, you’ll have to discern whether to go all in or to let your team catch up on some much-needed rest.

At the end of most weeks, you’re required to take part in a fight–ready or, more often, not. It would have been nice to make at least the starting fights optional because I had my ass handed to me for about a month before figuring our what worked for me. There’s also no option to practice fight, so there’s no way to learn the ins and outs of your team except through trial by fire.

Fights are turn-based and you and your opponent act simultaneously. There are 20 turns maximum, during which you have to knock out the other team. Should you fail to, the winner is the team with the most HP remaining. During a turn both you and your opponent draw a hand, select the abilities you want to use, and face off. Cards have their own power levels and special effects, which is detailed when you mouse over them. They are also classified into punch, kick, throw, Ki, and special.

Each classification of card has a stat connected to it–as noted on the training screen and also under the details of the actual attacks themselves.

Your girls can learn new skills that fall into these categories, though each girl is better suited to different types as noted in their status screens. Should your fighter not know a move that falls into a category, they will only be given the option to defend or evade, which is present on every card.

Fights are where the game gets confusing–a fact that was addressed via a manual the developer translated which can be found here. The number on your card denotes it’s level. The higher the level, the better chance you have of canceling out your opponent’s card, which means they take damage and you don’t. So far, so good. Then there are these markings on the advantage bar below your chosen move which indicates your chances of overturning your opponent’s chosen card. The problem with this isn’t only that it’s confusing due to the fact that the blue dots are the inverse of the difficulty of performing the move–it’s that you won’t see your opponent’s attack until it’s too late to change your card choice. In some cases, apparently when your girl arbitrarily out classes her opponent, you see one card choice ahead of time, but otherwise, you’re just choosing the cards with the highest values.

Which would all be very well and fine except it seems that some card types have advantages over others–something that isn’t fully explained in game or in the manual. If two cards with the exact same advantage bar readings face off, they don’t cancel out; one card overpowers the other. From my observations, punches are better than kicks and Ki better than throws, but I’m not entirely certain.

This attempt at making the game more complex is more frustrating than nuanced because winning comes down to luck and not precision planning. 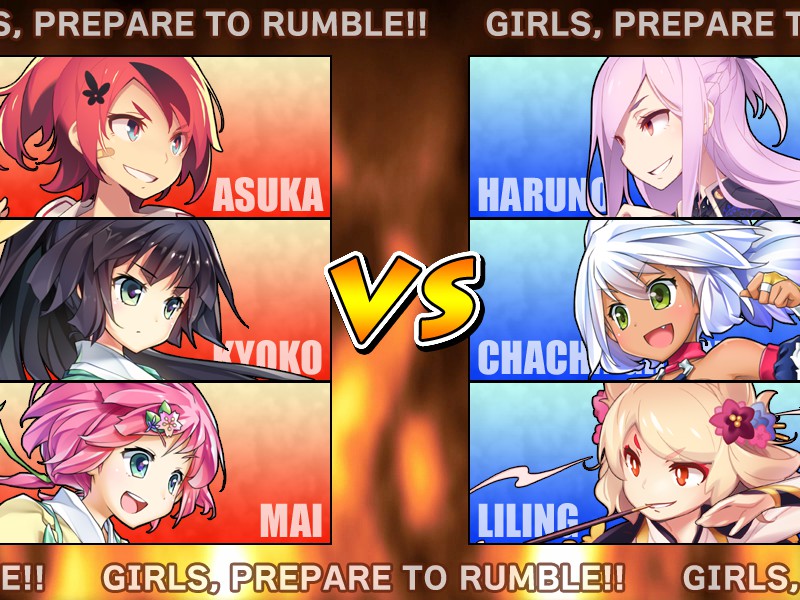 Presentation wise, Cherry Tree High Girls’ Fight is solid. The girls are cute and wildly different in terms of style and the static backgrounds they’re presented over are nice to look at. Also of note is the different theme music for each girl, which can be heard when you face off against them, though there’s no voice acting whatsoever.

As a title coming from a developer that has made two successful VNs, Cherry Tree High Girls’ Fight is a little lackluster. It feels as though they tried too hard to make the fights engaging and ended up neglecting other elements. Even if you’re really Jonesing for a management sim, catch this one on sale.