As much as I like the idea of space-shooters, in reality, after initial interest, I often become somewhat bored of the gameplay loop and relative repetition delivered by extended space-based combat. Perhaps that’s why Star Fox is one of my favourite examples of the genre – it takes the concept of space-based combat and it simplifies it into an arcade-like experience that keeps the challenges brief but extremely exciting. ROCKFISH Games’ exceptional, Everspace takes a diametrically opposing approach to Nintendo, but by crafting something unique at the other end of the spectrum, have delivered one of the finest and most enjoyable space-shooters in recent memory.

By combining traditional but incredibly polished space combat with roguelike mechanics, Everspace delivers a compelling, tense and utterly addictive take on the genre. The more arcade-styled, but equally brilliant, Galak-Z did something relatively similar on PS4 back in 2015 (albeit in 2D), but while that was an undoubtedly polished experience, Everspace represents a triple-A equivalent of the concept, complete with a larger scale, a more serious tone, and above all else, some utterly gorgeous visuals. It is home to the occasional technical hiccup and the control scheme certainly takes some getting used to, but for the most part, this feels every part the kind of big budget space shooter that we so rarely see on consoles nowadays. While it is inevitably limited on an artistic level due to its space-based setting, the technical and artistic work done by ROCKFISH Games rarely fails to impress. As great as it might look though, what really sets, Everspace apart is its exceptional gameplay. The roguelike structure ensures that it remains compelling in the long run, but it’s your ships slick manoeuvring, the games’ exciting combat and the solid mechanics throughout that make it such an immediately enjoyable experience. It doesn’t do anything particularly new in regards to space combat, but just about everything it does do, it does incredibly well. Whether it be exploration, loot collecting, small scale dog fights or large-scale battles, Everspace manages to succeed on just about every level.

As I mentioned previously though, when it comes to space combat, good gameplay isn’t always enough to keep me interested in the long run – that’s where the roguelike structure comes into play. Sure, there are tons of roguelikes out there, but despite being something of a well-worn genre at this point, it’s one that can still prove captivating when delivered alongside strong combat and a well-balanced sense of progression. Yes, getting sent back to the beginning of the game upon death can be hugely frustrating, but like the best examples of the genre, death in Everspace never feels unfair. That doesn’t necessarily stop me from throwing my controller at the wall or shouting randomly at my cat, but it does ensure that once I have calmed down, I invariably have another crack at reaching the conclusion of this consistently enthralling sci-fi adventure.

Heck, even the story is good. It’s hardly 2001: A Space Odyssey, but the narrative does a good job of explaining away the somewhat unique mechanics of a roguelike shooter while doing enough to create a generally interesting universe in which to battle. It’s unlikely to stick with you in the long run, but the unique enemy factions do at least play into the gameplay loop with excessive time spent in a specific sector or high damage inflicted upon enemy ships leading to a GTA-esque wanted system that will see the enemy call upon additional reinforcements when required with the sh*t really hitting the proverbial fan when one of the factions decides to call in an extremely powerful warship. At that point, it’s time to abandon battle and get the hell out of dodge by escaping via a jump gate before you are blown to smithereens and subsequently sent back to the start. 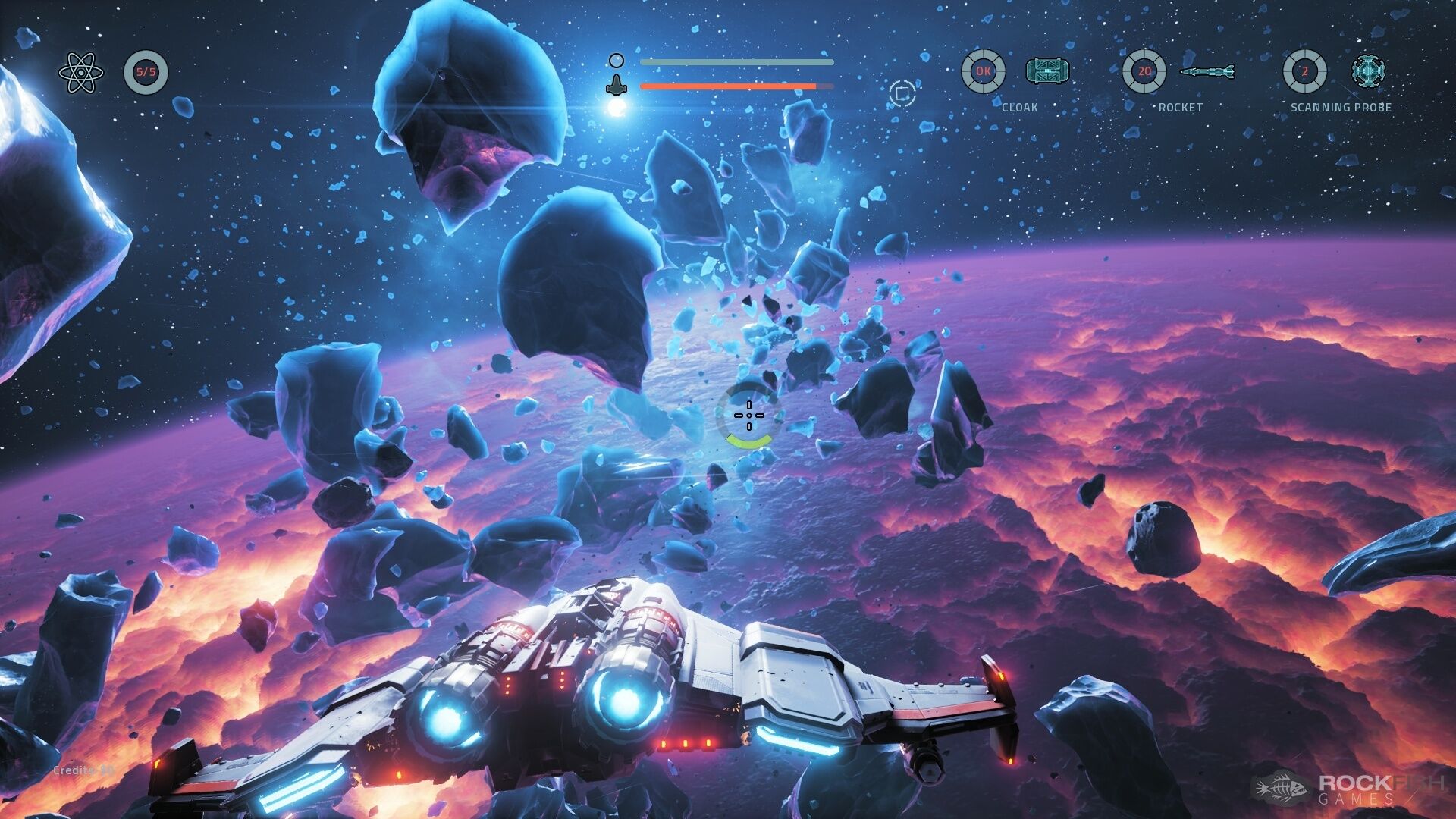 Even if you do get killed though (and you will…a lot), the upgrade system ensures that frustration is kept to a minimum. Yes, losing your upgraded weaponry and ship is annoying, but by spending the credits collected on your previous attempt, you can still upgrade one of your three unlockable ships before heading back out and thus giving you a much better chance of progressing further than the last. It also helps that, with procedurally generated locations and randomly generated resources providing plenty of variety, each run does feel like a genuinely unique experience.

With its fantastic core mechanics and oddly addictive life support requirements (I probably died just as much from damaged life support as I did from traditional enemy fire), Everspace succeeds as much as a traditional space shooter as it does as an exemplary roguelike. With its triple-A visuals and fantastic gameplay, at its core, this feels every inch the modern day space shooter, but with the smartly implemented roguelike mechanics, well-balanced upgrade system and surprisingly intriguing narrative all working in perfect harmony, Everspace becomes something, dare I say, rather special. It might feel like it has come out of nowhere, but ROCKFISH Games’, Everspace proves one of the most pleasant gaming surprises of 2017 and proof that there is plenty of life left in the space combat genre.