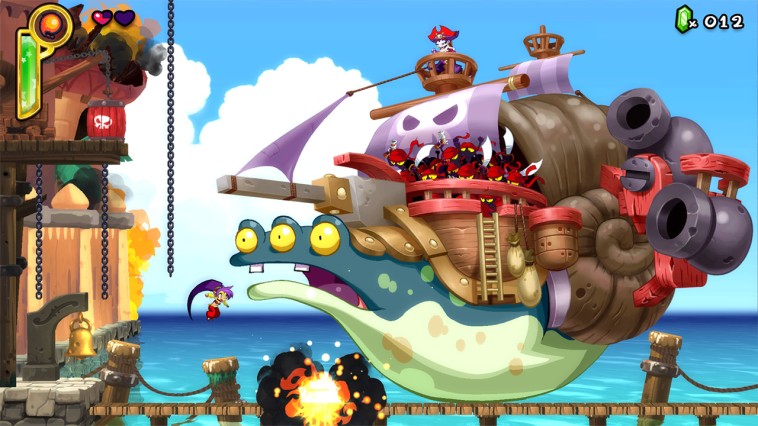 Shantae has gone through a pretty cool transformation since she landed on the Gameboy so many years ago. Released, forgotten, then returned with a vengeance, the half-genie has seen a HUGE fan increase as the games have come out, and the latest installment, Shantae: Half-Genie Hero, is another massive step forward for the series.

The story can be forgiven for how formulaic it is, at least for Shantae. Pirates attack her village, she attempts to save everyone, and, in the process, gets fired from her position as village protector. Another Half-Genie by the name of Holly steps in to take her place, and Shantae dedicates her time to running around helping villagers, trying to help her uncle build yet another massive machine, and also showing that she is the right half-genie for the job. There’s also something clearly off about Holly, but that doesn’t get revealed till later, though anyone who’s seen any children’s show could pick up on it immediately. The story and dialogue is peppered with witty and hilarious statements, and just enough of it is voiced to make it fun without the whole thing being spoken. I think it was a good move on WayForward’s part, as it encourages people to listen along without getting bored trying to not read faster than the voice actor speaks.

Graphically, this is the most superior Shantae to date. There is a beautiful hand-drawn yet CGI element happening, and there’s tons of depth in each and every level. Shantae moves fluidly across the screen like a painted deity, and there’s a distinct difference from when new elements are introduced. Early on, the addition of a magnet to your Uncle’s invention feels like it came straight out of Paper Mario in the surreal way it lands, but this isn’t a bad thing. Shantae is all about mysticism, and having something feel otherworldly in this game is a step into the right realm of fantasy and illusion. 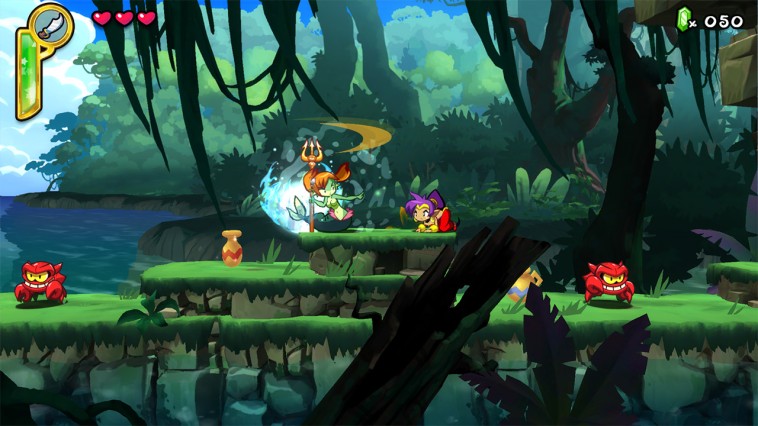 Besides the normal function of being able to whip things with your trademark ponytail, Shantae has the new ability to transform into animals through dances that she learns after finishing levels and sometimes buying from merchants. The animals are important to progressing forward in the game (similar to the transformations that Wonder Boy recently encountered in his Switch debut) but the polymorphing is temporary. I really enjoyed the way this was handled, as it really made for a genie-esque feeling akin to what we’ve seen in other mediums (Aladdin, Shimmer and Shine, etc). It’s also kind of satisfying to turn into a monkey, climb a wall, jump off and turn back into a butt-kicking half-genie before you even land. It’s a great mechanic that doesn’t use magic and is well executed, though Shantae’s dance can sometimes be a bit too mesmerizing. Also, you first get asked to dance by a villager before you know what the button does and before you have any transformations. As a result, I stood dancing in the village square for a full minute before I figured out I needed to keep moving and, you know, do something.

Spells play an important part in Shantae, as they can be the ranged weapons you desperately need for some enemies and bosses. There isn’t any hangups regarding spells in this iteration of the game: mana replenishments are plentiful from enemies and pots, the jewels to buy said spells are plentiful, but there isn’t a single one that’s so powerful that you give up on traditional combat. Don’t get me wrong, they’re essential: an early boss is almost impossible to finish if you don’t have a ranged attack to strike her crown, though I confirmed it was possible to hit her by jumping and lashing. Still, one hit vs three, and said boss was actively trying to pulverize me. You get the idea.

Speaking of difficulty, Shantae is surprisingly all over the map in Half-Genie Hero. The bosses are actually the least of your worries in most of the worlds. Each level is divided into multiple scenarios, from straight forward side scrolling to a bit of stealth puzzling to quicktime reactions. Thankfully, you can save between each stage transition, which seemed like overkill until I got killed…a lot. A great example is the Mermaid cove you encounter. After some pretty basic wall jumping and baddie slaying, you end up tumbling down a hill at rapid speed with barrels, bad guys and chasms showing up at a pretty break neck pace. I had to restart this multiple times and used all my healing items, despite not even needing a single potion or orange prior to this encounter. I wanted to say it was frustrating, but it was actually a pleasant wakeup call after feeling a little too confident for the past half hour or so. Well played, Wayforward. 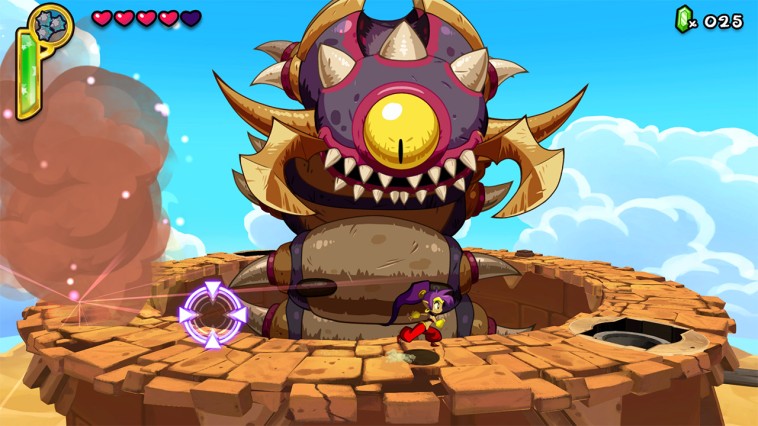 The soundtrack, as always, is superb. It bounces from comical and lively to dark and mysterious with every level transition, and there are even vocal tracks! I was very surprised to hear the voice actress, Christina Valenzuela, add her song to the first real level of the game, and was also very happy that it wasn’t something where singing was heard every single time. I hope Jake Kaufman is getting a good deal with royalties and loves his job, because his name keeps getting attached time after time to indie games that are amazing, and I think his contributions should not be overlooked.

Owners of Half-Genie Hero on Steam may not be compelled to invest in the Switch version, but that’s only because they haven’t considered the HD Rumble aspect. As gimmicky as it may seem at times, I really appreciate developers taking the time to invest in this API for Nintendo, and it legitimizes the way the Joy Cons interact with the game. The arrival of ships, the distant launch of cannonballs, even just the pulse of the music while Shantae dances are all moments that add a bit of feedback and depth to the game. I attempted to play Shantae with a 3rd party controller and that was more than ok, but using the Nintendo branded devices and feeling what the dev wanted you to feel is another level entirely. Of course, there’s also the element of portability and being able to play this great installment anywhere you go, but it’s the HD Rumble that really sets it apart from other ports.

Shantae brings a lot to the table with Half-Genie Hero, and it’s no contest to say this is the best Shantae game so far. Even if you were less than impressed with Risky’s Revenge or The Pirate’s Curse, I confidently say you should give Half-Genie Hero a go if you’re even remotely interested in the hilarious misadventures of a Half-Genie. It’s challenging, it’s light hearted, and it’s so cute at times your teeth may hurt. In a time of super heavy and serious games, it’s always good for some whimsy and hilarity to mix in, and Shantae is exactly the dose for me.