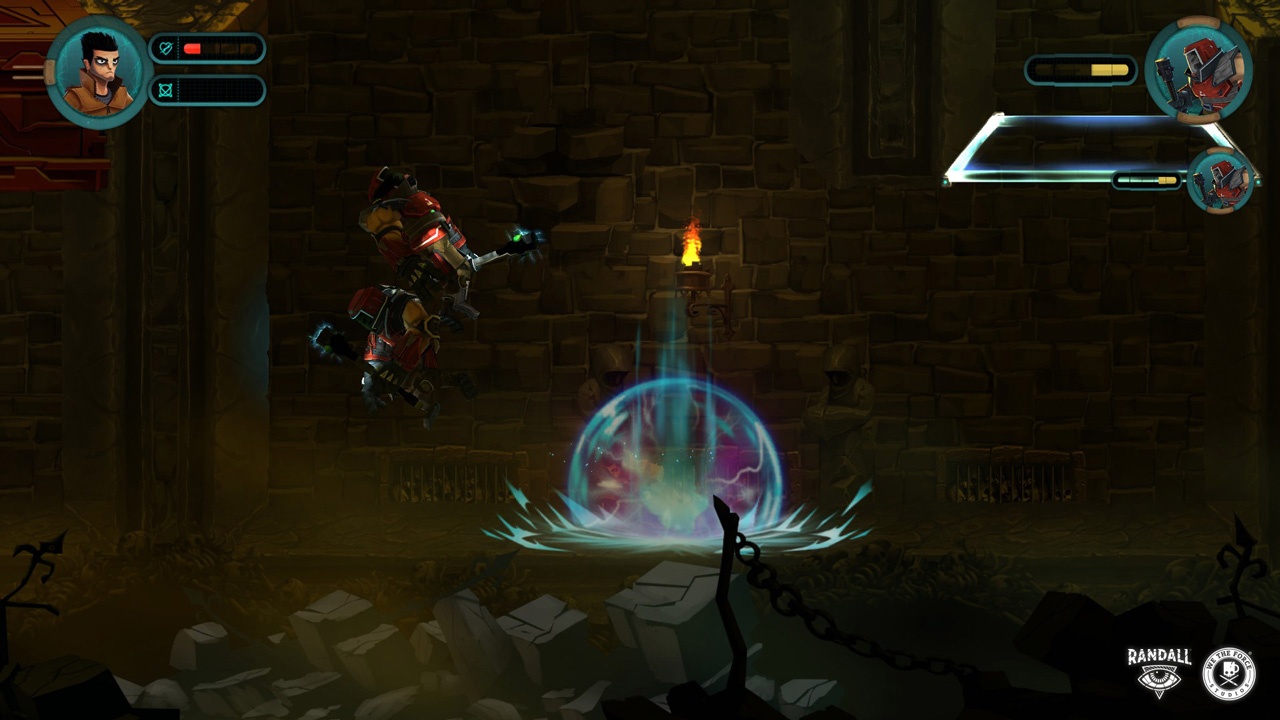 Randall has an identity crisis. Sure the titular main character is schizophrenic, but that has nothing to do with the motley of great ideas presented here–badly. The game seems to want to be a precision platformer what with its diabolically designed gauntlets of obstacles, but stiff controls that often stick or counterintuitively throw you into things that can harm you fight against that personality. It seems to want to be an action game, but Randall fights like a boxer; with his feet firmly planted. Your enemies will rush you and give you a beat down, but you’re only able to throw a three hit combo–whether that means uppercut, low kick, or what have you–knock them to the ground, and edge towards them while you wait for them to regain their footing in order to attack again. In other words, it isn’t fluid, fierce, fast–and whatever other f-adjectives you can use to describe good combat. It claims to be some sort of a Metroidvania, but combat is stilted and unimaginative and exploration is often more frustrating than rewarding.

So where does that leave dear Randall in the end?

On paper, Randall seems like a great mix of ideas. However, the platforming is frustrating and imprecise when it shouldn’t be. Traps and hazards are often placed in such a way that one single misstep sends you back to the last checkpoint and, while those are adequately placed, the slowdown associated with having to attempt the same section again and again detracts from the experience.

Combat is weak as well. Randall is able to perform combos with punches, kicks, grapples, and the like, but all other movement grinds to a halt when you’re in the midst of throwing a punch. As a result, hitting an enemy will slowly push it out of your reach, after which you have to wait for it to regain its footing. Randall can only take on one enemy at a time–something the game makes sure it tells you early on–which really just means you can be punching one guy and the other will dash in and hit you, interrupting your combo and leaving you open to an attack from the guy you were just hitting. Randall cannot change direction while striking either, so it’s easy to get surrounded and overwhelmed because the enemy is more agile than you despite your parkour abilities.

The clunky controls extend to the game’s main draw: enemy mind control. I’ll admit that I was a victim of good advertisement, seduced by the promise that you could control all on-screen enemies. I imagined it would be something akin to Ghost Trick, where you could pop into an object and interact with it to solve puzzles. Fantastic game, by the way. Sadly, Randall’s case is not the same. In order to control an enemy, you first need to stun them with the circle button. Then, you have the option to either use the enemy as a boost by mounting them and having them throw you or you can control them and ride on their shoulders. 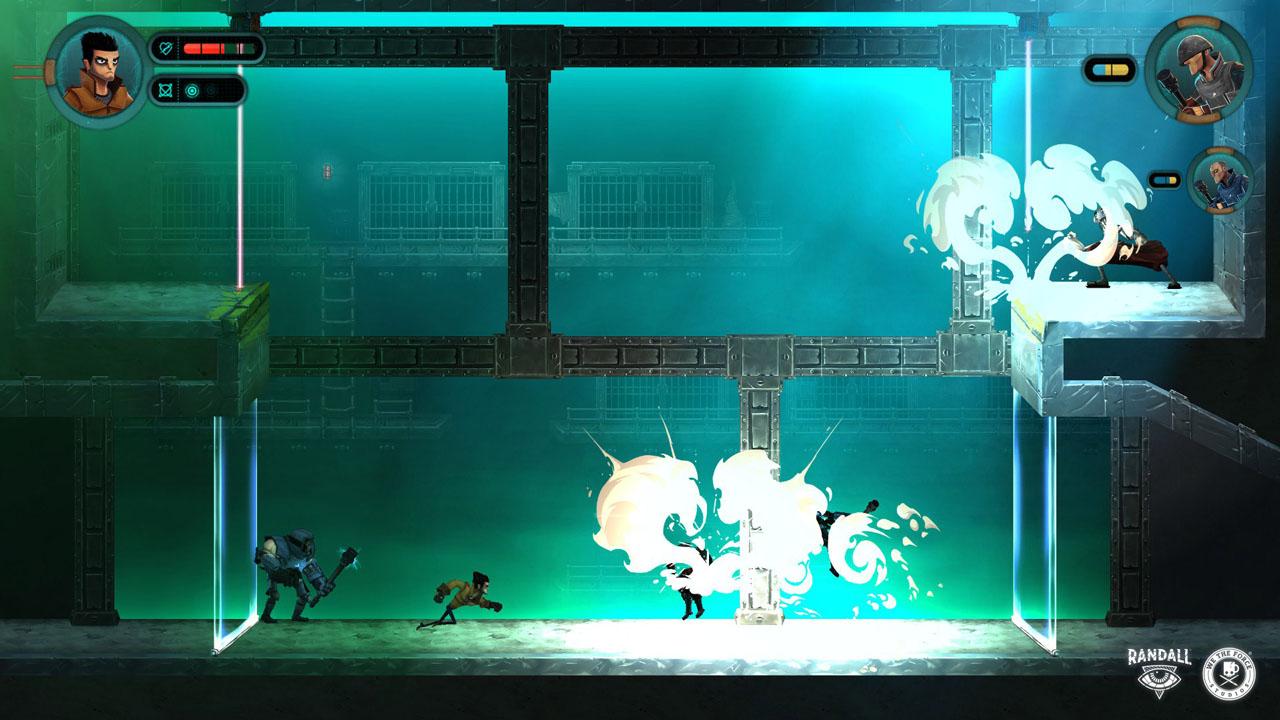 Depending on the enemy you take control of–let’s say a flying enemy- you can reach previously unreachable areas. Unfortunately, there are two major factors that make mind control more of an exercise in tedium rather than a clever gameplay mechanic: the mental capacity limit and how the enemy handles.

In the first case, there’s a way to improve conditions by collecting a certain number of collectables and expanding capacity. Until then, however, mind control is short lived and feels more of a haphazard hassle than anything.

In the second case, there is no work around. Steering a flying enemy is like maneuvering a slippery bumper car. It’s awkward, it’s touchy, the turns are wide, and hitting anything sends you ricocheting into various, deadly obstacles. This wouldn’t be an issue if your path wasn’t littered with them like some sort of death trap gauntlet, but that’s often the case. So flying an enemy becomes an exercise of frustration as you bounce between trying hard to fly slowly and carefully and either accidentally careen into something that kills you and starts you at the last checkpoint or you run out of mind control juice and you end up being ejected and going back to square one.

The game’s performance is also sub-par. Frame stuttering, slow load times, and the occasional glitched frame are just a few of the most frequent issues, but I’ve also found on a few occasions that a killing blow did not kill me and I could run around without health, unable to kill or be killed until I exited to the main menu and restarted from the check point with zero health so that I could die properly. 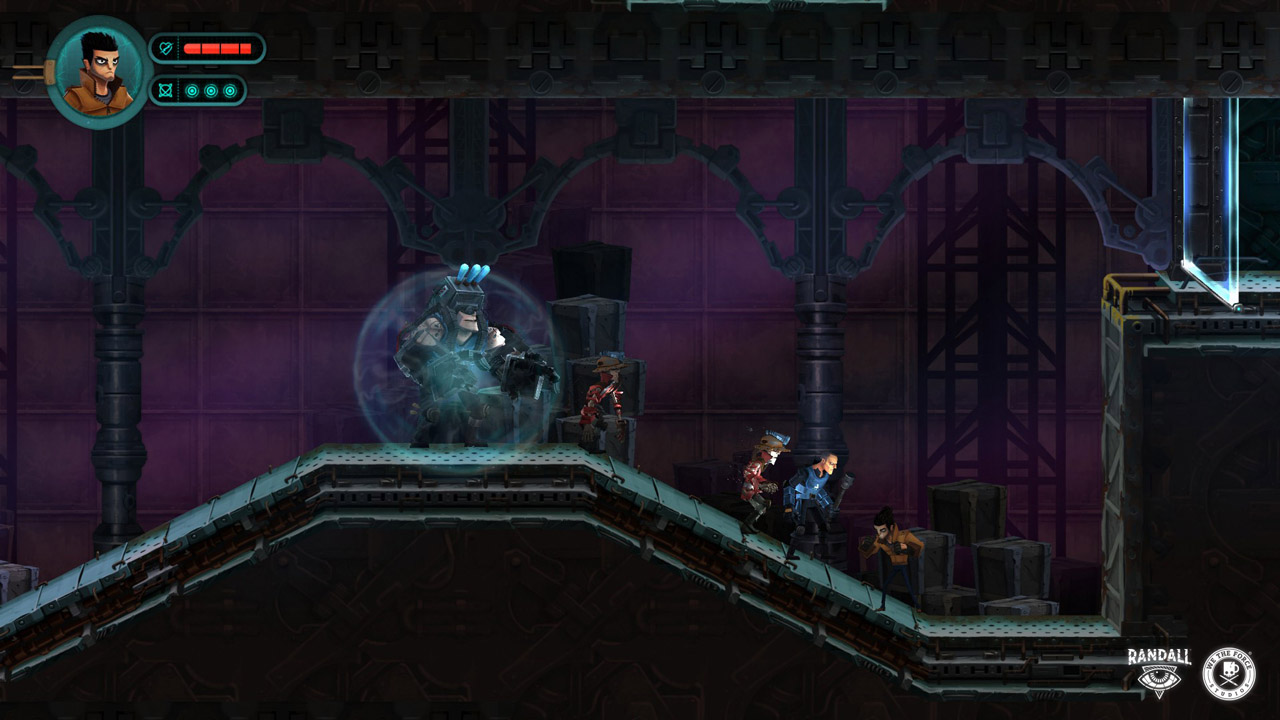 Finally, we have the writing. While the story is interesting enough, much like with everything else the delivery is botched. Randall suffers from schizophrenia and frequently addresses his different personalities. Because the voice acting is sporadic, reserved only for rare cut scenes, and there isn’t any distinction in text that would indicate a different speaker it’s incredibly confusing to read Randall’s conversations with himself. It just seems, well, crazy. The idea is there and, had it been voice acted, it could have potentially been funny, but as-is it’s just confusing. There are also multiple spelling and grammatical errors, which contribute to the overall lack of polish. Randall’s mutterings go from a plot device intended to explain your abilities and provide dark humour to laughably bad reminders that your character is mentally ill.

Randall looks nice enough–I love a good dystopian setting–and the music, which is a mix of electronic and a bit of grunge, is really good, but the core gameplay is so lackluster that you don’t really get the chance to appreciate them.

Randall is far too frustrating to be fun. The combination of elements seems like a good idea on paper, but poor execution holds this title back from achieveing greatness.