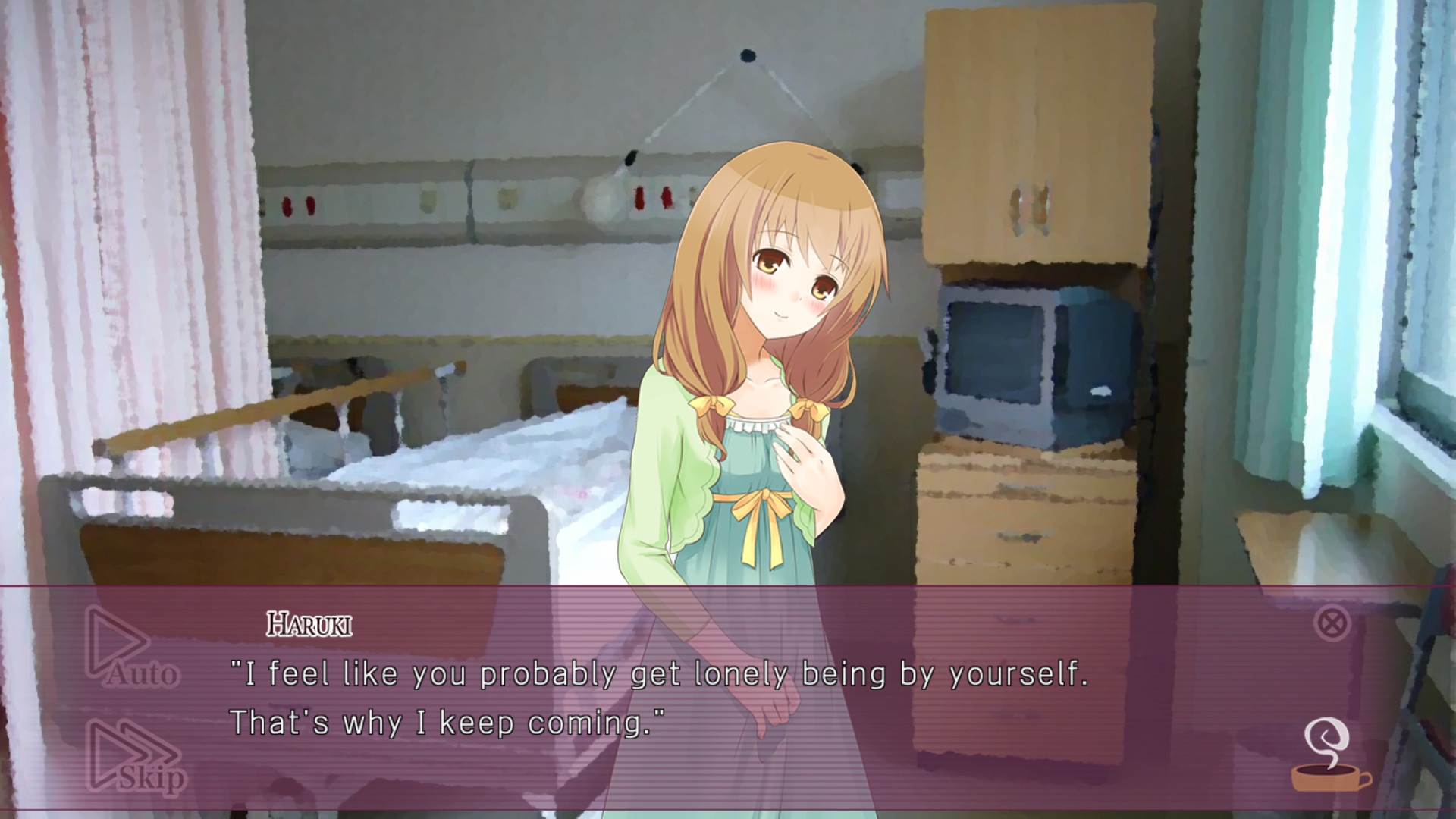 Visual novels, while popular in Japan, have a small die-hard fandom here in the United States. If you were to list game genres, most people would have never heard of Visual Novels being one of them, but they are, like A Butterfly in The District of Dreams, a strong and growing genre that is seeing more attention in the Western World. It’s important, however, to note that only certain people really get into Visual Novels, and are fine completing it from start to finish while others would just give up halfway and just call it a “Story” not a “Game”. A Butterfly in The District of Dreams would most likely fall under the first category by many standards.

The story starts off in Tokyo, where you play as a young college student named Haruki, who has become withdrawn ever since his sister, Anzu, ended up in the hospital. Since then, he has done nothing but wander around instead of going to school, lie to his sister about being happy, and cooking late at night for his parents who come home even later. It’s clear from the start that Haruki is suffering from minor depression due to the current state of things, and is really worried about his sister who, the game hits, is possibly dying. His only friend, Ai, tries to help him out by getting him to come to school again, but when they try to return home they take a strange train that bring them to a mysterious shopping district in another world that seems to go on forever. Taking residence at a local coffee shop run by Yurika, (Who looks a lot like Anzu) the two live there in a slice of life setting while trying to figure out a way home. 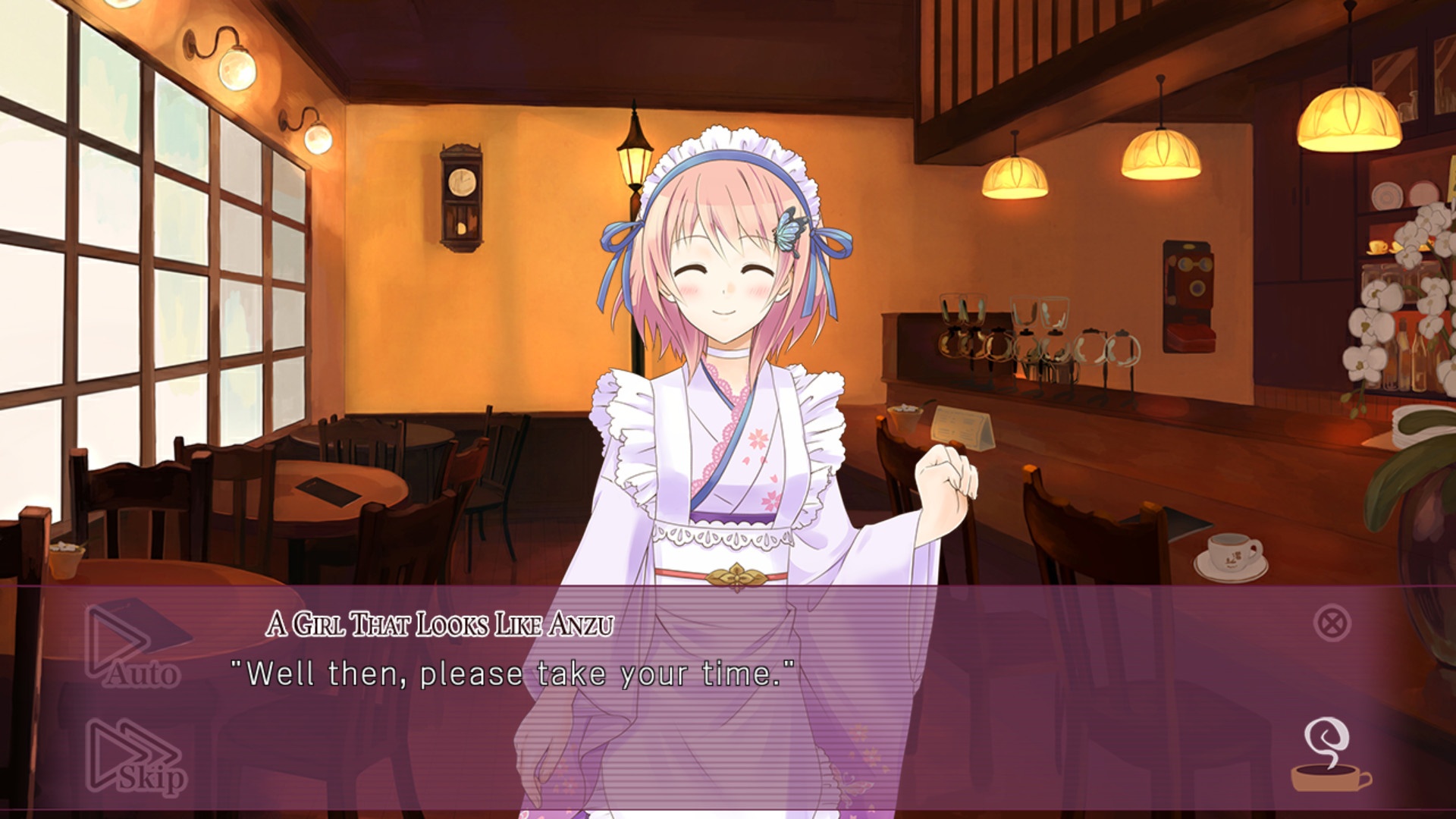 The story, at first, was very slow yet interesting as you come to see the mindset of Haruki, who you quickly learn to sympathize, and the obvious romantic interests his friend Ai has for him.  When you arrive at the shopping district, you learn a few interesting facts such as this is another world that goes on forever, people don’t age, nobody is born or dies, and it has a living god that watches over them. The place is built by the dreams of people, and at first it sounds like you’ll be investigating the town itself to discover who the dreamer is and how you can return home. However, the truth is that this game is a slice of life scenario, featuring the main character interact with others in situations that range from hilarious to heartwarming. The problem is that most of these characters and situations have been done to death before. The game pretty much stops standing out after the first chapter, and from there it’s just like watching a standard happy sitcom.

The characters themselves are designed and written well, but the problem is we’ve seen their types before. You have Haruki, the average joe hero who every girl seems to like, Ai, the shy genius who loves Haruki but doesn’t know how to express it, Yukira, the owner of the coffee shop who is perky, brave, and motherly, Rentarou, a jerk with a heart of gold, and Riko, a young little girl who acts cute but annoying. The only character that I personally like is Sakuya, the goddess of the district who pretty much acts like a jerk to everyone because she is a god and doesn’t care. Everyone else is pretty much a bread and butter type character that you can claim to see a hundred different times. You can write as good of a story as you can, but unless the characters are interesting enough it won’t be as engaging as it can be.

Just like with most visual novels, there is less focus on gameplay and more on art and story. The main “mechanic” of any visual novel is making choices that affect the story or your standing with the characters. It takes over three chapters alone just to get to the first choice. I find visual novel games that offer a lot of choices, right from the start to the end, tend to be the most engaging as it keeps the story fresh and flowing. Having very few makes the visual novel less of a game and more of an actual novel. The art is okay, pretty much average in both backgrounds and character design. The music fits the tone too, having a good up beat to fit with the slice of life moments.

I wouldn’t say that A Butterfly in the District of Dreams is a bad game, but it’s just nothing that hasn’t been seen before. It’s very average at certain parts, and cliché in others. If there was more to solving the mystery of the district, more choices to make in the game overall, and better written characters I’d say it would be a better game. However, I’m going to give it a 5 out of 10.