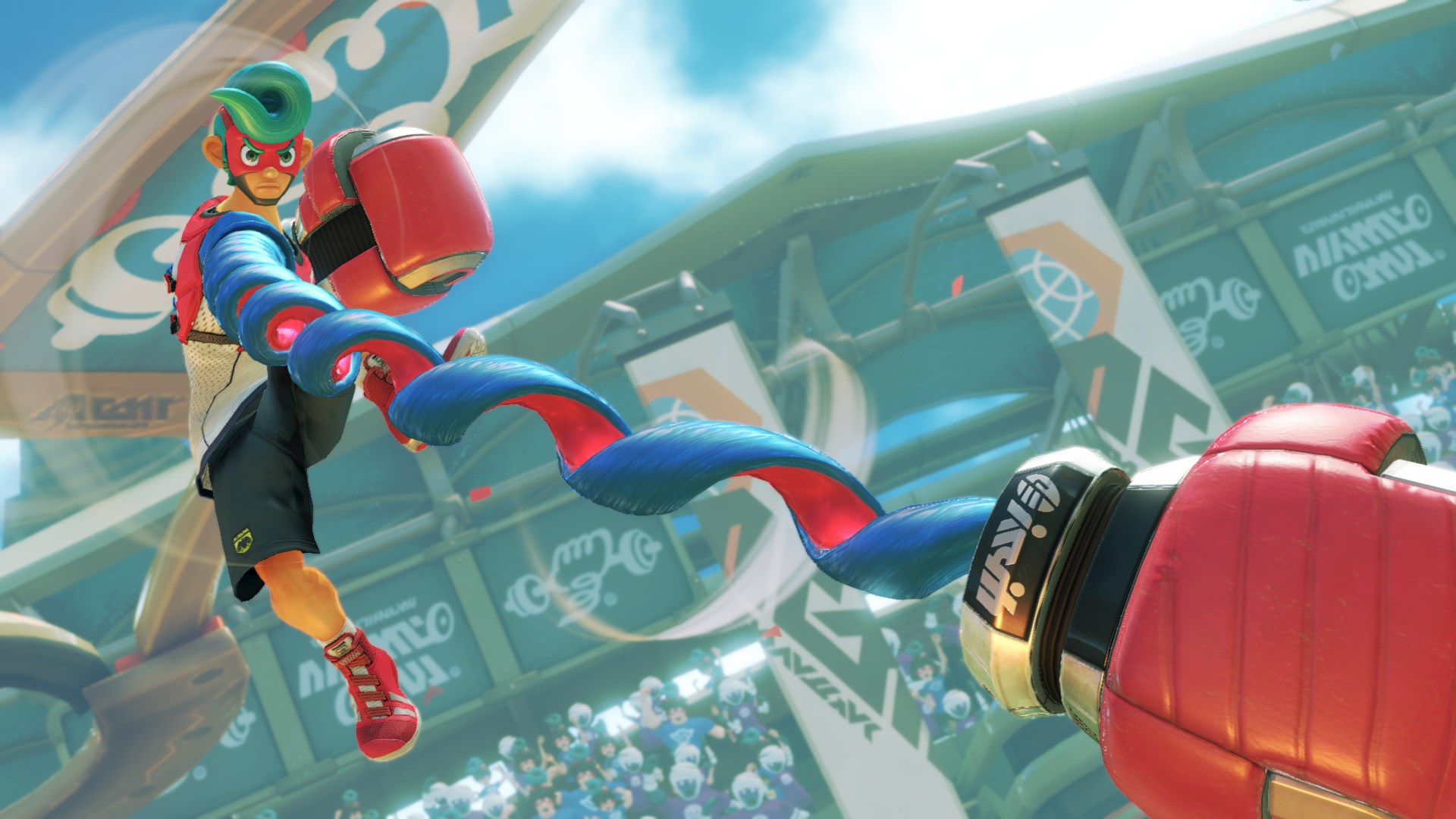 ARMS is Nintendo’s newest attempt to get into the online world of competitive gaming, and I think it’s one of their most earnest so far. Besides having a novel and unique take on an otherwise simple idea, the execution and display is one of my favorites in a community that is normally quite dark and heavy, as least as far as graphics go. But let’s not spend time talking about the others, let’s strap in and talk about ARMS!

First and foremost, the story is a pretty fun take on the “fighting tournament” that seems to permeate so many games. The ARMS tournament is a one on one or two on two arena where fighters with specially modified limbs duke it out for supremacy. This is explained that many of the fighters have special attachments that make their arms extendable and able to curve and bend, with a couple of characters taking a different approach (Twintelle, for example, fights with her hair, and Mechanica uses a robotic suit). The fights rely on the best of three, with characters being able to choose different boxing gloves between rounds. Each fighter starts off with three gloves that you can mix and match however you’d like, and every one has their own advantages and disadvantages. Additionally, you can “power up” your moves to do more damage and each character also has a couple unique abilities. Some of these skills trigger when dashing or jumping, others from taking damage, and yet others from strings of successful hits. With ten characters to choose from, you can really take your time to find someone who best matches your style. I ultimately paired with Kid Cobra, a skateboarding snake-costumed fighter who could duck some attacks while dashing. I was all about the speed.

I really like the approach Nintendo took with this new IP. Like Splatoon before it, they took a stab at creating a new environment with new characters and seem to have knocked it out of the park. People are already arguing over MinMin or Twintelle as the choice ARMS girl, and I think players are going to fall in love with Byte and Barq, the clockwork police duo. Even though there is a strong focus on fighting and blowing each other up, there’s no bloodshed in this cartoony world, though younger kids might still get creeped-out by Master Mummy and some of the fights towards the end of the main storyline mode. The stages, similarly, match the characters and their strengths; Ninjara’s temple stage always places one fighter at the top of the stairs, one at the bottom, and whoever gets the high ground has the advantage. There isn’t a stage that I disliked, and I grew to understand and prepare for all the nonsense that might come from being in Helix’s laboratory. 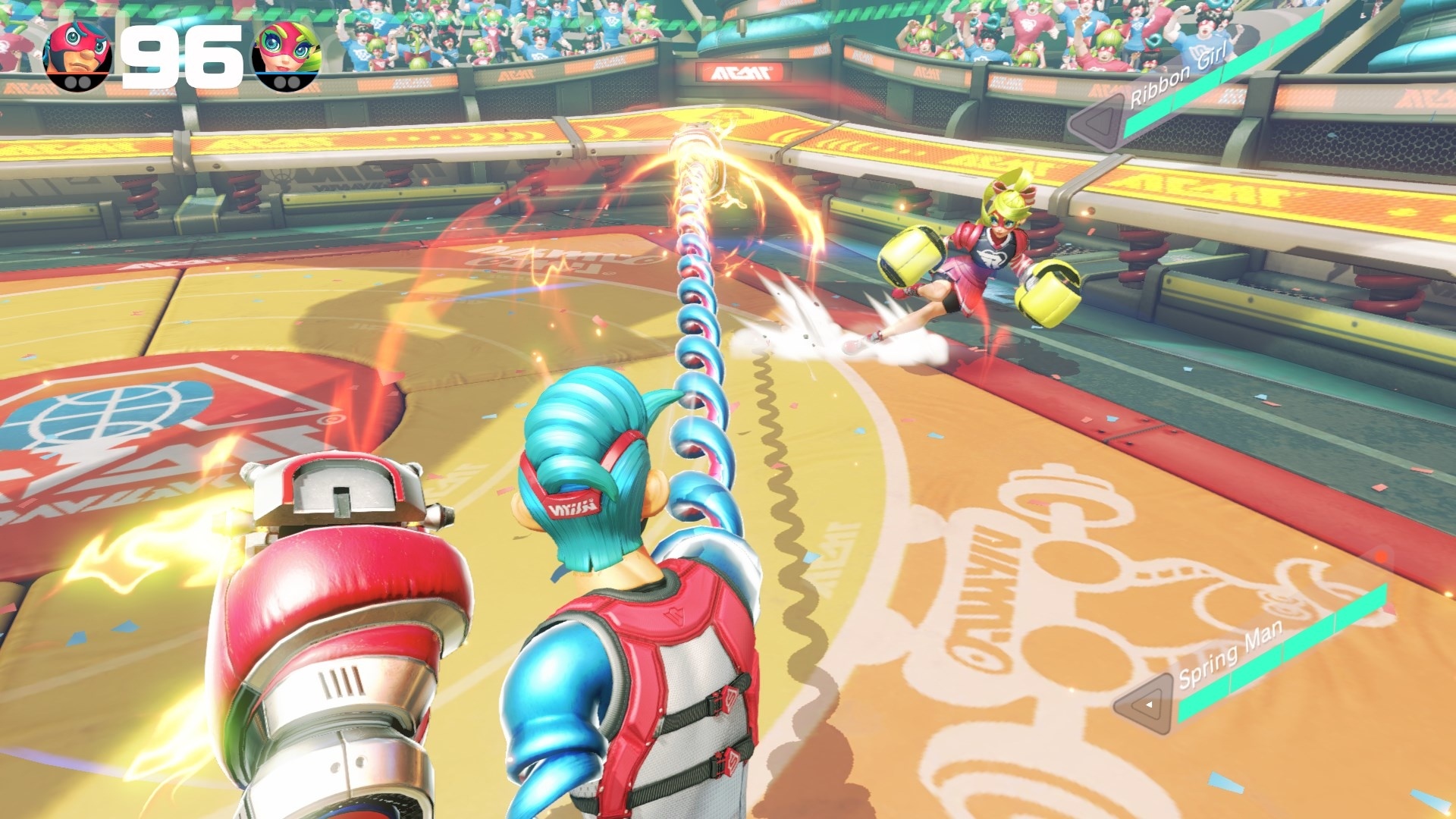 The main Grand Prix mode involves ten fights in a row, with two of the matches being swapped out for some of the skill-based party games in lieu of traditional fights. The party games may annoy the more serious fighters, as they rely on a totally different set of reflexes. Target shot, for example, is all about being fast and first and hoping your opponent doesn’t keep hitting you with cheap shots while you wait for the next set of targets to pop up. The basketball game is hilarious because you slam dunk your opponent instead of the ball, but that also means you rely on throws; the slower characters have a massive disadvantage when it comes to this game. And the volleyball game seems almost randomized with how well the ball behaves in being swatted around, and you may feel that you got robbed of a successful spike, but who can you complain to?

The Grand Prix also has an adjustable difficulty level. I recommend doing it on level one first just to get the lay of the land and also to improve your confidence, because things take a turn any level higher. And, from a one to a seven, you need to beat the Prix on at least a four to get to play online in ranked mode (normal party online is ready from the word go). Additionally, the Grand Prix gives you a scaling number of ARMS tokens per fight, with the per-match and end-of-tournament bonus going up significantly with each slot of difficulty. And, if you’re going to be playing ARMS competitively, you’re going to want/need those tokens.

As far as gameplay goes, ARMS is excellently diverse in its versatility. You can do two Joy Cons, one Joy Con or a Pro Controller to help navigate and engage with your chosen fighter. It creates a bit of an odd dynamic that I feel will be important to separate if and when ARMS tournaments are held. For the most amount of fun, in my opinion, you want to use the Joy Cons as your left and right arm. The motion controls are very intuitive and feel natural once you get down the rhythm of punching, blocking and dodging. You and a friend/family member look and feel pretty fantastic going head-to-head, and it almost invokes the spirit of Pacific Rim when you’re doing two-on-two with two Joy Con sets. However, using the Pro Controller gives an edge to anyone who’s looking to play competitively. The button layout is also really smooth, and your reflexes of honed gamer fingers will outflank anyone except for someone who actually boxes in the amateur or professional circuit. Great, now I want to see a pro player take on Mike Tyson in ARMS and see what happens. Regardless, these two different playing styles almost create two different games, and I love any game where my child can punch wildly in the air and come out the victor. 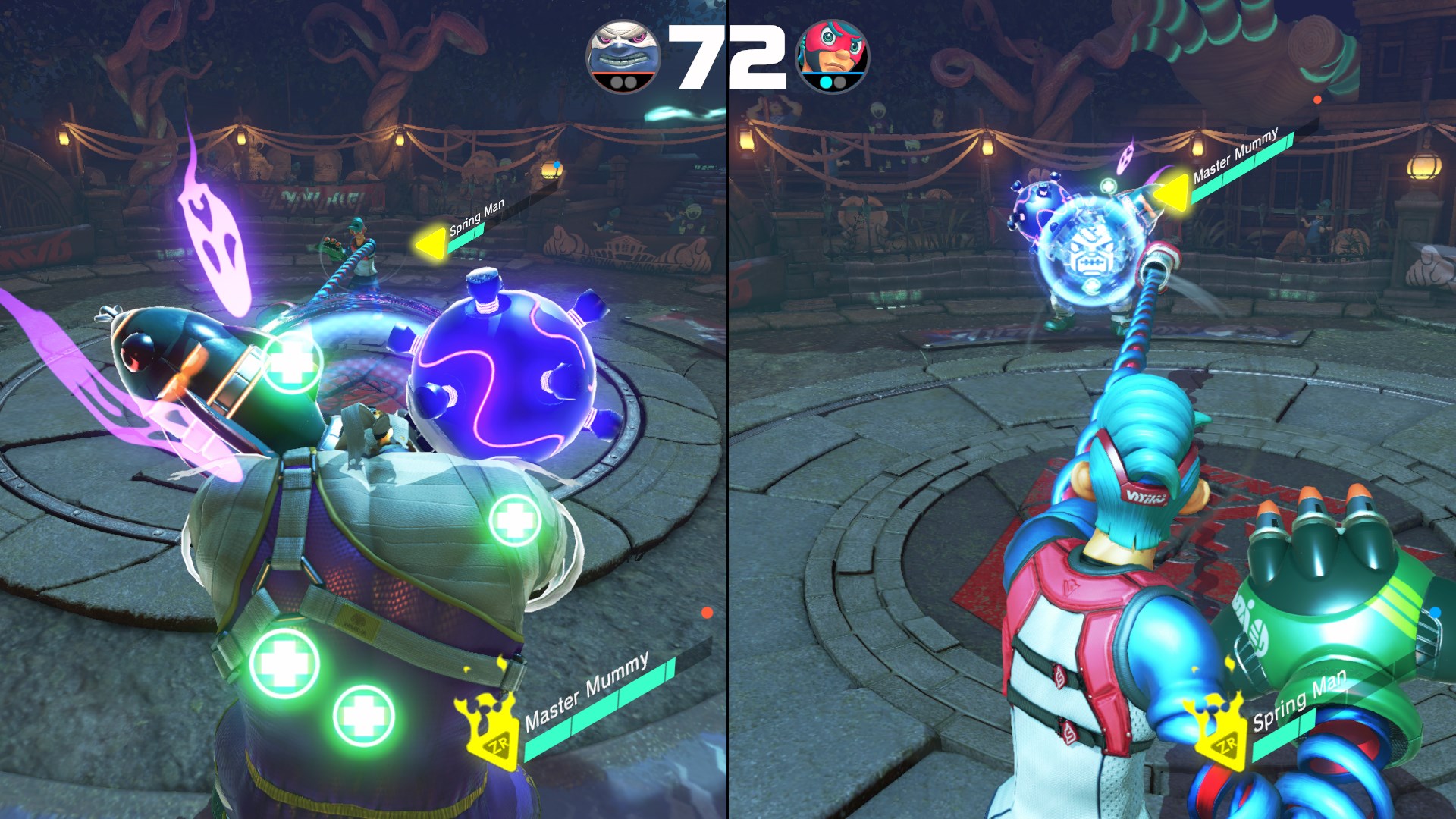 There’s loads to do in offline, single-player mode, but it’s clear that the shelf life of ARMS will come from the online battling. Nintendo had a great deal of success with keeping it’s lobbies full with Mario Kart 8 Deluxe, and you need far fewer players on hand in order to enjoy a good punching session. I feel confident that players will have little to no downtime between bouts if they get in on the game around launch.

If I have a complaint about ARMS, it’s the way that additional gloves are unlocked. As it stands now, you need to save up your tokens from fighting and then use them to enter a mini game that varies in length based on how many tokens you spend. The mini game is essentially the skill target from the Versus Mode that occasionally spawns larger barrels which contain the gloves. It’s a bit of skill and chance, and you can only unlock gloves for the character that you’re doing the mini game with (so if you favor only one fighter, this might not be a bad thing). It’s a little annoying and frustrating that the tokens can’t be directly exchanged for the gloves, but I understand that Nintendo still wants players to work a little for more options and variety, and I do appreciate that it’s not an in-app purchase with actual money. Also, this does give me hope for even further variety in gloves with future DLC and/or patches.

I can’t believe Nintendo has done this again to me. The company that’s re-innovated gaming year after year make me excited to box as a snake boy and I can’t wait to play online with friends and family around the globe. If you had even a small amount of enjoyment from the Global Testpunch, you owe it to yourself to check out ARMS in its entirety and get ready for a whole new world of online gaming to open up before you. This really is the year of Nintendo.