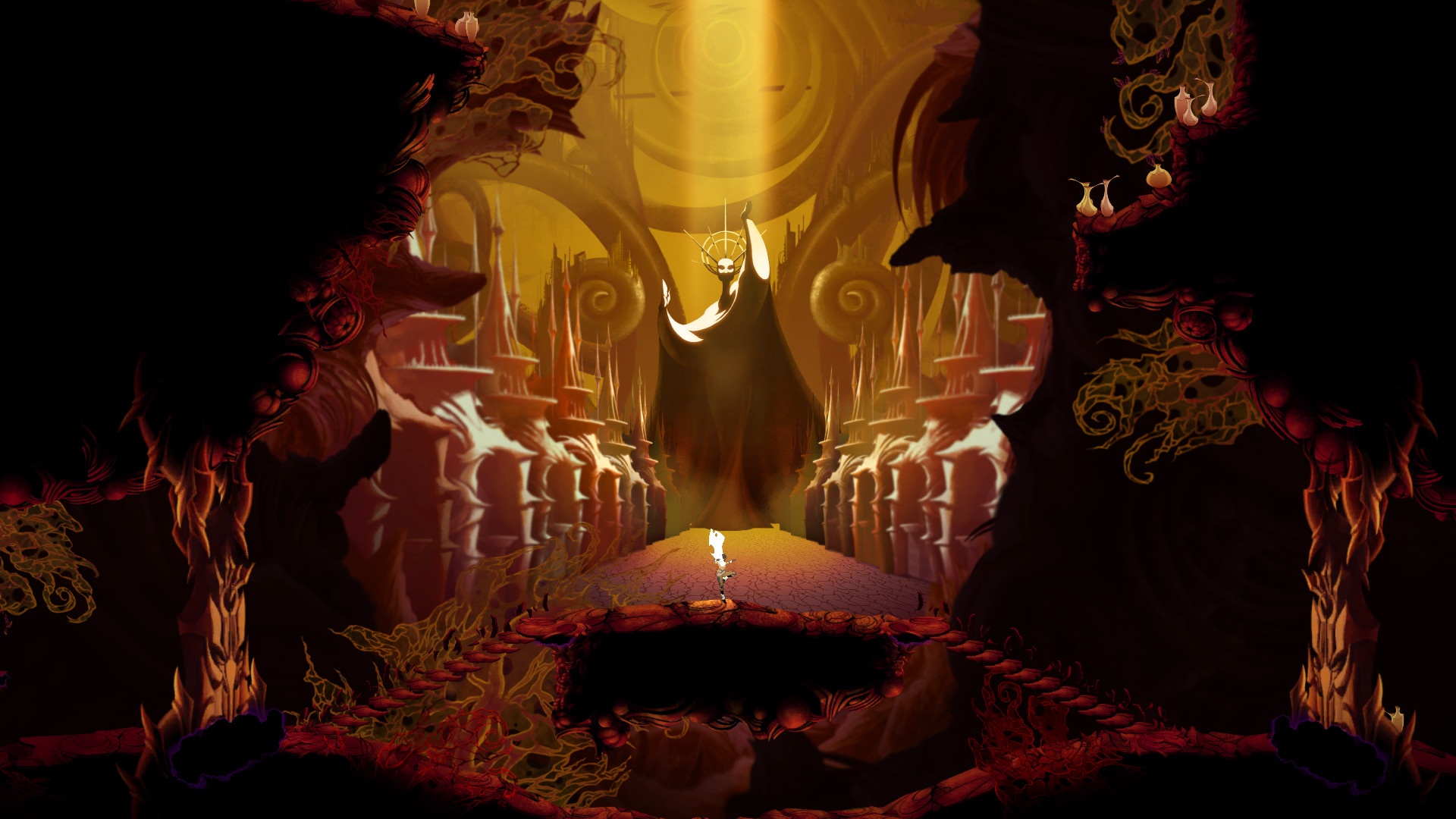 Sundered comes from Thunder Lotus Games, the studio behind the critically acclaimed Jotun. Sundered is a pretty much a straight up metroidvania, involving plenty of action and backtracking, especially if you want to explore every single bit of the game. That said, this preview is based on the the game’s pre-alpha demo which features one of the three regions from the final release.

Now, in terms of the actual story not much has been revealed and the preview build does not feature any sort of story or lore elements so it is kind of hard to know what is really awaiting out there. All we know is that you play as Eshe, who is trying to fight for her survival in this ever-changing old world corrupted by mysterious forces. That said, I am looking forward to see what else is revealed about this and here’s hoping the storyline lives up to the quality of the gameplay itself.

If you fancy this sort of games, or if you want to show your support before the game’s release you should check out their Kickstarter here. The developers are resorting to crowdfunding to help fund the last few months up until the release and to get people to give their feedback on early builds in order to help balance the game and refine what is already in place. 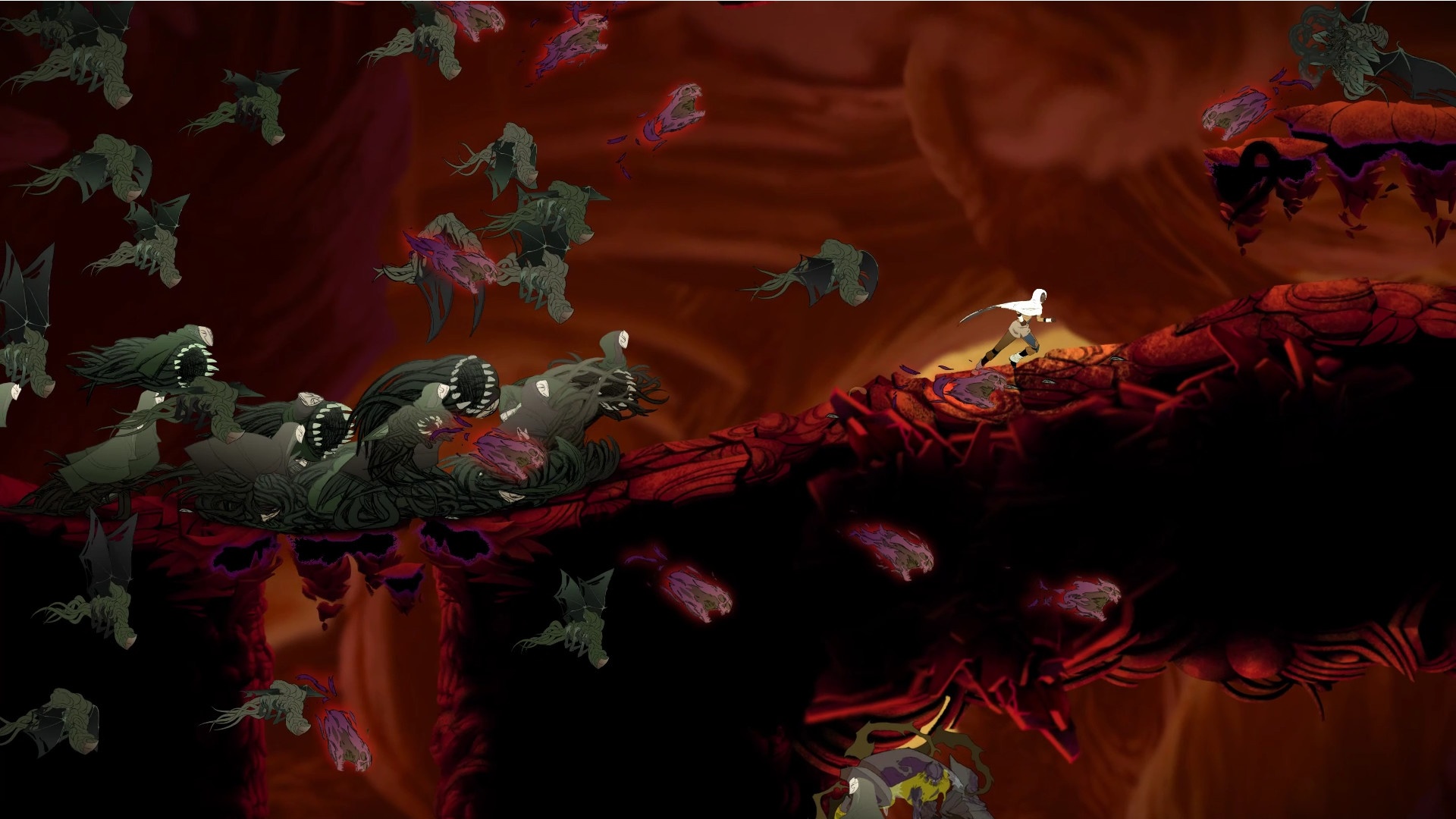 Now, one thing that really stands out right from the beginning when you look at Sundered are the vivid, vibrant and colourful visuals, all hand-drawn art pieces made by very same ones that worked on Jotun. While the setting and the visuals of both games are a lot different, when seeing the game in motion, you can clearly notice the similarities. One thing that Sundered does stand out is in its animation quality with every single player and enemy movement feeling extremely fluid, which I find to be way superior if compared to the studio’s previous game. Also somewhat related to the visuals themselves, there is another thing I noticed which I don’t really like and that is the fact that, while I do like the enemy designs quite a lot, the game just reuses the enemy designs by changing their colour and size in order to differentiate weaker enemies from stronger ones. That said, I’d like to see some sort of actual changes in the art assets themselves here.

In terms of actual gameplay I was really surprised to see such a change of pace when comparing Sundered with Jotun, and I don’t mean that as a bad thing. Given that it is a metroidvania, Sundered focuses a lot more in fighting multiple enemies at the same time and requiring the player to remain alert and vigilant in order to hit the right combos at the right time. As far as I can tell from playing the game and from reading a little more about it, the way enemy spawns work is sort of like in Risk of Rain, in the sense that more enemies will spawn in a given area the more time you spend there. So, if you find yourself spending too much time exploring a certain area you might end up being overwhelmed by hordes of these lovecraftian creatures that plague the world. Of course this wouldn’t be a metroidvania without bosses and, despite having only faced one boss in the pre-alpha version, I must say it was kind of massive and epic fight. In the first time I faced this boss, this huge skeleton mechanic spider-like creature, I quickly died in just 2 hits and it took me another run to figure out its movement and attack patterns. That said, you do really feel like a fragile thing when fighting it and the slightest mistake can lead to your doom.

Regarding the combat, you start out with a basic melee attack and some sort of cannon attack which requires ammunition in order to be used. As you progress and explore the levels you’ll also unlock different abilities and acquire some sort of currency, which I couldn’t determine exactly what it is, which you can use to buy perks and passive upgrades such as, increased health, increased melee damage, faster shield regeneration, that sort of thing. One particular mechanic which I find to be rather interesting is the fact that you have the ability to corrupt (upgrade) your abilities. The most interesting thing about this though is the fact that, apparently, corrupting your abilities not only affects the gameplay but, in the final version, it will also affect which ending you get, since corruption is tied to the story. 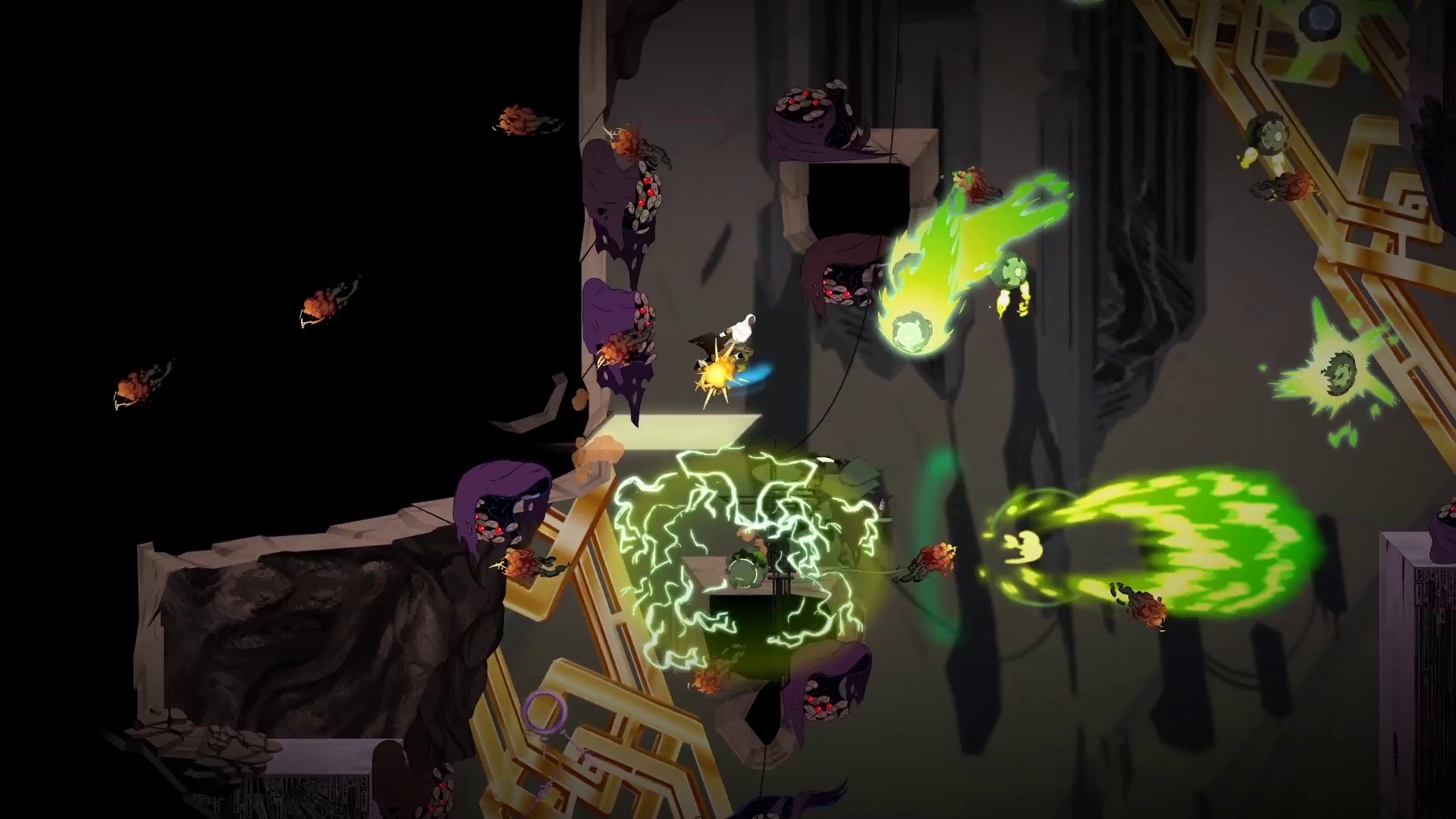 Now, while most metroidvanias stick to hand-crafted levels in order to make it easier for players to move around, Sundered takes a different approach. The world in Sundered is divided into several zones, which will remain marked on your map after you die, and, inside each one of these zones, there are several rooms through which you move around. The way that Sundered plans to add more replayability is by having these rooms layouts be hand-made, while their order, disposition and how they connect to each other is randomly generated. So, in essence, the levels are a mixture of hand-made rooms laid out in random ways, thus allowing the player experience to be slightly different every time they respawn and also making the adventure of backtracking a little more difficult. That said, I do wish that the map would better inform you on how difficult each zone is. Anyhow, no matter where you die or how, you’ll always respawn in this sort of hub area, where you can customize your equipable perks and purchase new passive abilities. This area ties to two complaints that I have, the first one being the lack of other areas to spawn (checkpoints if you want to call them that) and the second one the fact that I get this really weird drop in framerate every time I’m in this area, and this usually lasts for about a minute after leaving it.

Overall, I must say that I’m really looking forward to how Sundered will shape out to be, particularly other regions and enemies. The combat and the gameplay in general feel really smooth and responsive and, despite having only experienced 2 of the 7 abilities that will be available on the final version, I’m hoping that the rest of them also introduce a new approach to each room layout and come up with new ways to deal with your foes. That said, do keep an eye on this one for it shows a lot of promise.