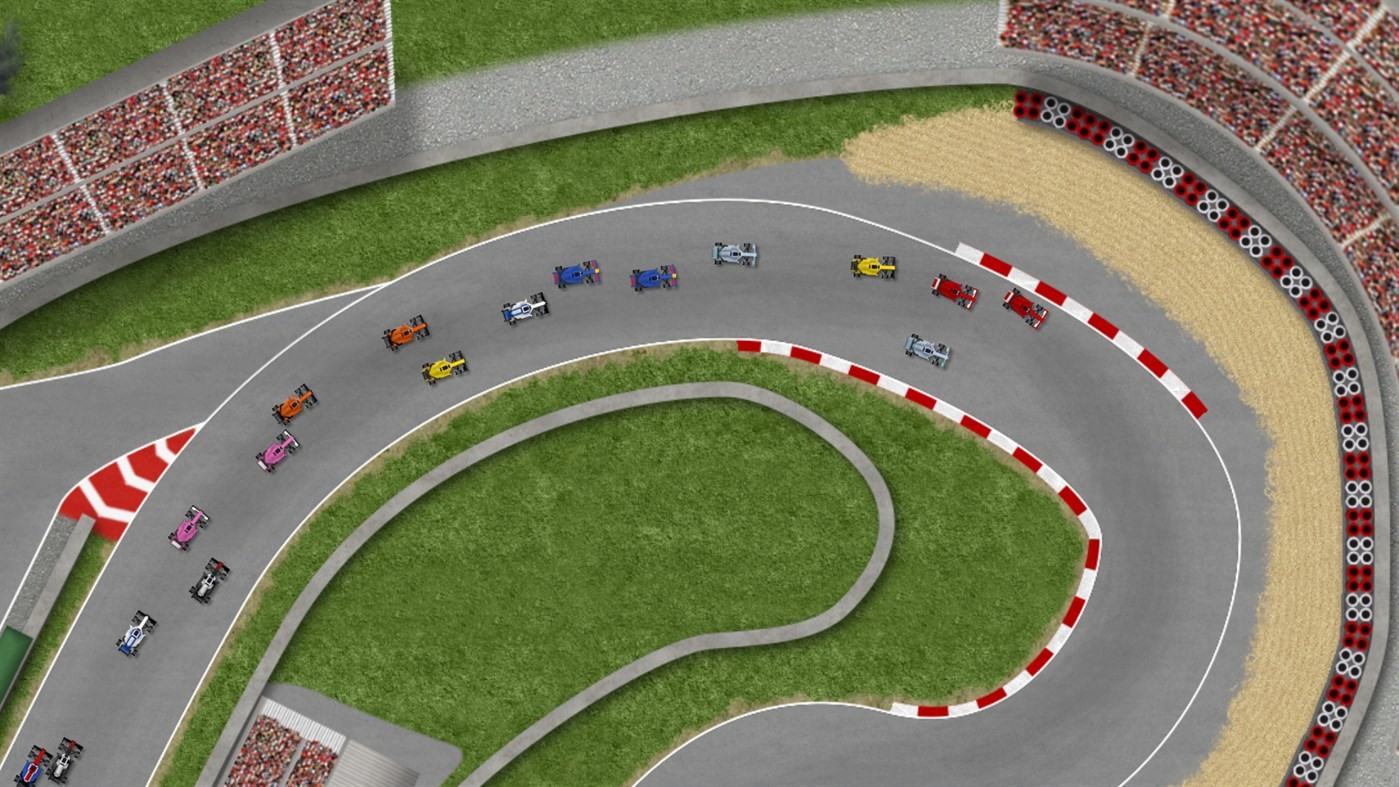 Ultimate Racing 2D developed by Applimazing, a table top racing game which allows you to race against both AI and human opponents. With a vast selection of vehicles and tracks to choose from, there really is something for everyone. This title took me back to playing video games in the 90’s, where the racing genre was simple in its concept. The moment I started playing it, it reminded me of the unfortunately named Super Skidmarks, it received its name due to the marks left on the tracks, and not an unfortunate trouser accident. The art style, gameplay and sound effects really do pay homage to a gaming classic.

The developers have allowed you to choose how easy or difficult you want your gaming experience to be. Me with my years of racing experience of watching Motorsports on my sofa and playing a varied selection of games, I thought that I would be able to master this title no problem. Call me Lewis Hamilton as I’m breaking out the Ultimate difficulty on Race 1. What an epic mistake that was. I lined up my F1 car for qualifying, I somehow made it around and checked my times against my opponents. I was rock bottom a whole 10 seconds off the pace. Tail between my legs I retired from that season, obviously it was nothing to do with my driving, my car just wasn’t up to scratch.

From that moment my obsession to beat the game began. I wanted to win to prove to the AI that I was better than them, I wanted that number 1 podium spot and the drivers championship. Again, I decided I wanted to start at the deep end, sink or swim. I choose the challenging F1 vehicle and the 10 season career. With an open choice of which team to choose I started with the one that represented Racing Point. A reasonable target of finishing 8th or above seemed achievable even for someone who clearly was way out of his depth. I chose medium difficulty and strapped on my helmet and PPE. I was going to prove those naysayers wrong, I was going to hit the dizzying heights of 8th or higher. I opted to have a qualification session, otherwise you start at the back of the grid each race. Also, I was clearly in need of the additional practise. My first attempt went well, against all odds I was 3rd on the grid. This fuelled that little obsessed spark in my brain, I was hungry for victory. I sat in position and observed the lights culminate to 5 steady reds, the race had begun. All of a sudden, all hell broke loose. Scenes reminiscent to a determined Michael Schumacher played out. Barging and blocking pursued as everyone was determined to win. No quarter given, and no stewards to tell you it was wrong. It was a free for all, and I loved it. The red livery of the “Ferrari” considered the best car, I think the developers have a soft spot for Suderia Ferrari. The red devils are constantly buzzing around you, pushing you to make an error, and when that moment comes, and it will, they pounce on it and all your hard work is undone. You drop through the field like a stone in water; 1st, 2nd, 3rd all the way to 8th. Temptation to restart the race was strong, but you can’t do that, well simply put that just isn’t sport. This one loss galvanises your resolve, you come back stronger, faster, sharper. The next race will be the one that you win. 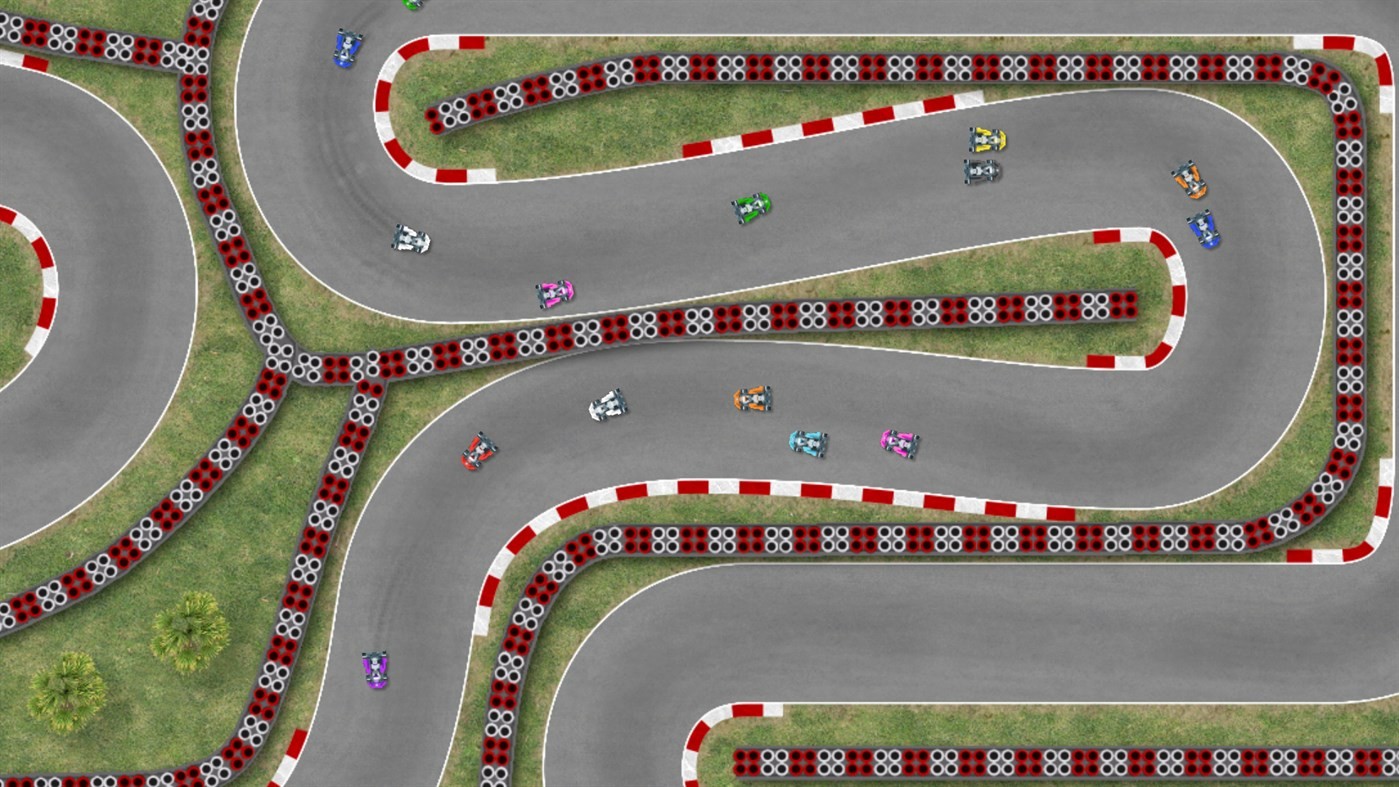 My first season was over in a flash, unfortunately I didn’t win, I spent my time battling it out in the middle of the pack scrapping for 6th place, my team goal achieved, but my personal one a failure. I couldn’t be considered the next Lewis Hamilton, or Max Verstappen. I was merely a rookie who had had a good first season, Lance Stroll if you will. Something had to change. At the start of each season you are offered a new contract with different manufacturers, at last, the big boys wanted me. Time to jump ship and sell my soul to the “Ferrari” team. Personally, this didn’t feel right, I never truly agreed with Ferrari’s methods, they are like the Dick Dastardly of the racing world, the pantomime villain. But my desire to win was too strong, where was that contract? Let me sign! Thus began my glory years of racing, the adoring fans in the crowd watching me win in the red machine. Times were good, now came the moment to increase the difficulty, all my hours of practise had culminated in this crowning moment. However the game had clearly not read the script, I failed miserably once the difficulty was pumped up. At the end of the season my contract offers were limited, not even “Racing Point” wanted me back. I was dumped on the pile to select between 2 back runners, pretty much like Fernando Alonso.

With this being a tale of failure you might think I despaired at the game and wanted to quit. You’d be wrong, I absolutely loved it. I wasn’t going to let this 1 setback knock my confidence. I would be crowned the Ultimate Racing Champion one day.

A title when first looked at shows few signs of the depth of gameplay that awaits you. Such a vast selection of tracks which are representative of real life locations, and 55 different vehicles to choose from, such as; go karts, bikes, super cars, forklift trucks and of course racing cars. With varying weather systems and tyre degradation, tactics and race styles must be adjusted accordingly if you wish to win. Choose to qualify or not its up to you. Increase your difficulty, race length, or number of events in the session and you will benefit from an increased prize multiplier. All current teams in the F1 setup are recognisable, and can be selected. Due to a lack of license don’t expect to see any real life names. A number of game modes will have you coming back for more. An event mode which gives you a specific goal, this is where you will spend most of your time as you have 35 levels to complete. Coin mode, which is as simple as; race, win, earn coins and buy bigger and better vehicles. There is also a local multiplayer which allows up to 8 players to battle it out over custom scenarios and different length championships.

I stated that Ultimate Racing 2D plays homage to the wonderful Super Skidmarks, this is great if you like me love a bit of retro nostalgia in your games. The graphics really do hark back to the mid 90’s and this will be a sticking point for a lot of gamers. A lot of the vehicles look rough, and though there are obvious differences, they all pretty much look the same. Another issue that was a problem is being able to identify your vehicle from the 19 others on the track. If you hadn’t put the names to be visible, it really was difficult to highlight yourself at the beginning of a race. However the developers have done a great job with designing the track layouts. A number of locations are instantly identifiable, all be it on a much smaller scale. 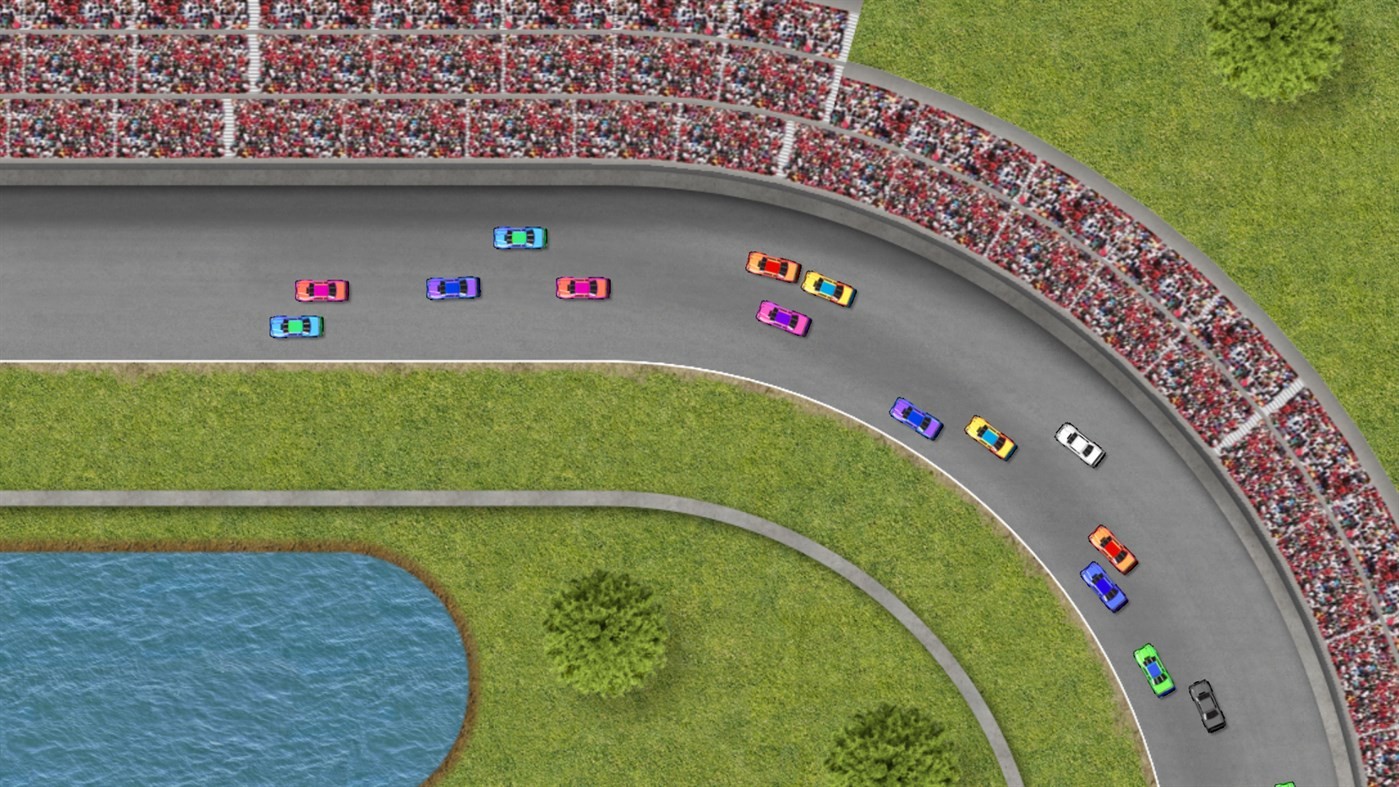 I’m usually a nocturnal sort of player, and this can be an issue when playing, as the sound travels through the house and wakes my young children. My way around preventing that from happening is using my delightful headphones, problem solved. Unfortunately, in this title this made for an excruciating mistake. The sound quality has to be the weakest point, each vehicle has its own identifiable screech. You will be welcomed by the ear splitting noise of screaming for every race that you enter. There is no music to interrupt this audio nightmare, the only relief from the sound of engines whining was the occasional sound of metal against metal, and then the torture would begin again.

The controls are as simple as they come, accelerate, brake and steer. Occasionally you will be able to use a booster, or be required to select tyres depending on which game mode you are playing, or which settings you select. The AI is simply unstoppable in this, so as you crank up the difficulty expect them never to make a mistake, so master the basics otherwise you will never win. Keep the car on track, any clipping of the sand or grass and you will slow down so much that you will be overtaken by a granny on her mobility scooter. A negative I did find which is not really with the control system, but more with the controller that you are using. If you happen to have a dodgy connection like me, and the controller resets itself, then the whole race restarts to the beginning. Don’t make the mistake I did on my epic 200 lap speedway race. 150 laps in and my controller starts flashing, the screen says press A to start, and back to lap number 1, Nooooooooooooooooooooooooooo!

For the achievement hunters you have 22 to collect, when first looking at the list, it can appear quite a daunting task. In reality, once you get to grips with the controls you can manipulate a number of races to ensure the goals are completed with relative ease. The hardest one is “complete the final level on event mode.” With a small amount of grinding this is obtainable.

Though the title is pretty simple, it does pack some interesting content which will allow you to want to keep playing, that is of course until you finish the achievements. Once all the events are completed, and you have your F1 crown the desire to return is reduced. Unfortunately the lack of online multiplayer ensures that this game will only attract a limited audience. If you include; the basic graphics, awful sound and the controller glitch, you do have a recipe for disaster.

My desire to beat the game, and generate my own narrative is what made me want to play this so much, I feel I’m going to be part of a very niche market, and not a lot of people will be able to overlook the negatives. I enjoyed my time playing Ultimate Racing 2D, but now I’ve finished all the challenges I will be shelving it until the developers decide to add an online multiplayer mode. A game that takes its influences from the 90’s and hasn’t really developed any of those points for a modern market will unfortunately receive a cool welcome, the exception may be that if you are a hardcore retro gamer, or a racing fan, you may be willing to forgive its obvious drawbacks.

A tabletop racing game influenced by the 90’s, can you beat the challenging AI to be crowned the Ultimate Racing Champion.