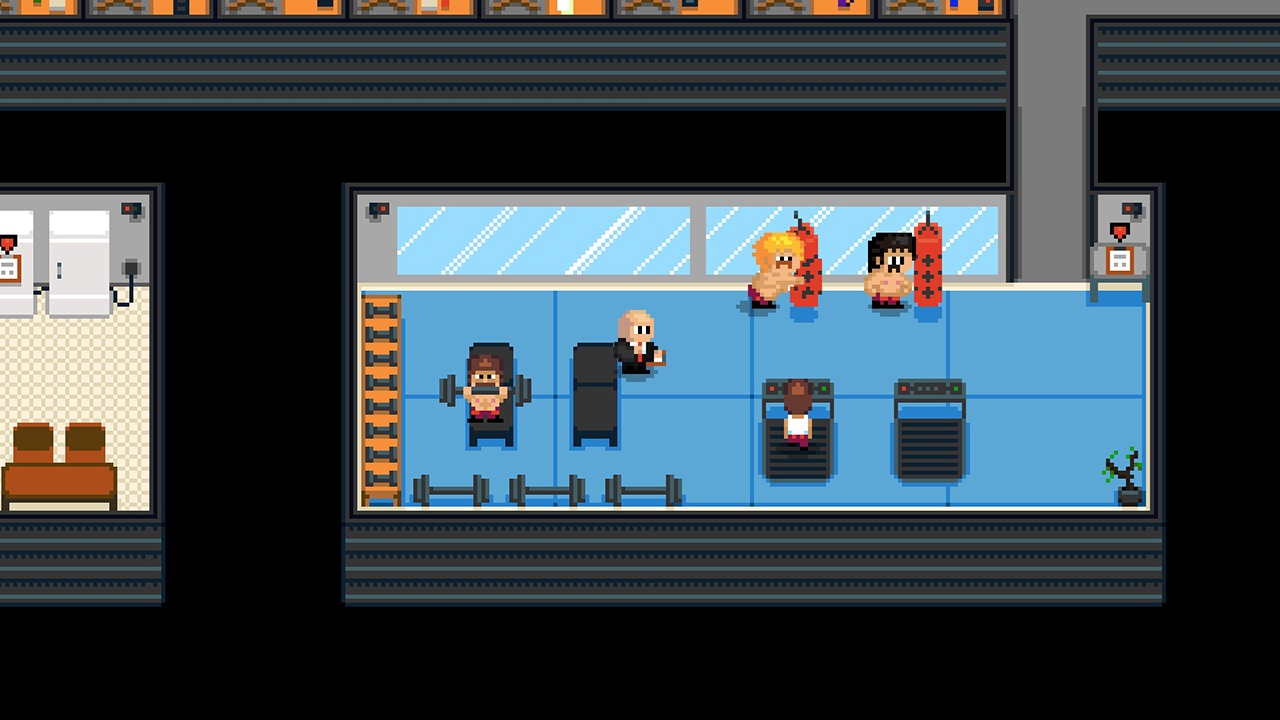 The life of a hockey coach in North Korea is a hard slog sometimes, but it’s the life I’ve chosen. I’ve thrown my whole life into our national team, The Shitfaced Bosons. Sometimes a tear wells up in my eye as I watch my prisoners-turned-players pass the puck around with lightning speed and check opposing team-members from the devilish United States or the poser-socialists of Sweden. Our best shooter, Kwang-Hwan Jong, suffered a fatal injury to his testicles in a tournament match against Canada the other day. Smacking those hosers until he went down grabbing his pulped gonads, Jong truly was a Shitfaced Boson to the last. He had joined the team while serving a 10-year sentence for jaywalking. The rest of us carried on without Jong, eventually showing those chiselers what it truly meant to be best Korea. When we aren’t playing against teams from across the world, me and my Shitfaced Bosons train at our home gym under the bright security camera lights.

If you decide to pick up “Super Blood Hockey” and take Franchise Mode for a spin, these experiences and more are in store for you. Watching trailers for “Super Blood Hockey,” I expected a hilarious and gory couch multiplayer game. Don’t get me wrong, I got that in droves, and this game should be an instant buy for anybody with roommates who like hockey. What I didn’t expect from “Super Blood Hockey” was a deep and difficult experience that filled me with nostalgia for NES-era games. 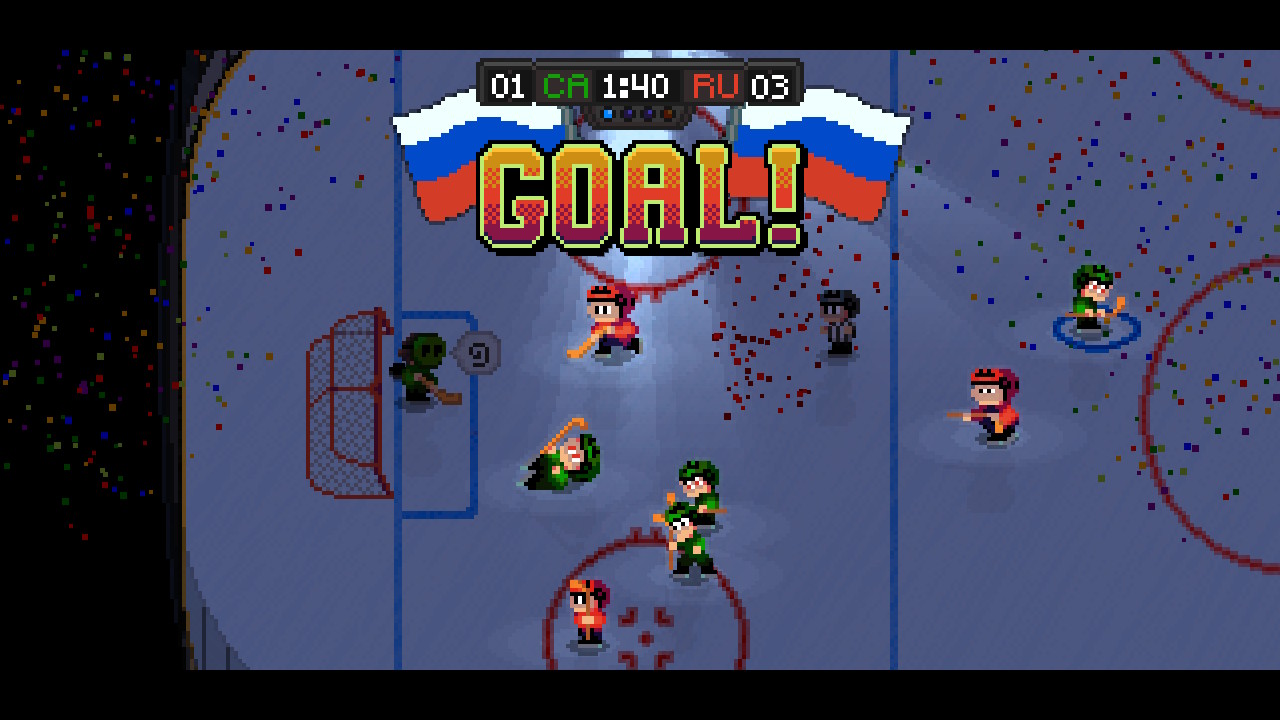 I’ve been writing a lot about difficulty lately , and I hem and haw a lot about whether or not difficulty makes a game better or worse, often concluding that I like it more when games keep the pressure off. But this game isn’t difficult in a needless way, and its dealings with you are never marked with cheapness. The controls are simple. You skate around, passing with the B button, shooting with the Y button, and checking anybody and everybody with the A button. This includes the opposing team’s players, your teammates, and the ref. The difficulty comes primarily from the AI and the fact that you need to aim your goals. Because you use the same stick to move and aim, you need to flick it in the right direction at the last moment to get it around the goalies. And the goalies are GOOD. I played the game entirely in easy mode and even there I can say with assuredness that you will not get the puck past the goalie just by aiming at the direction of the goal and pressing shoot.

Outside of the many different options available between matches in Franchise Mode (including buying performance-enhancing drugs to increase team members’ stats), that’s all there is to Super Blood Hockey’s gameplay.

Well, aside from the brawls. After a player gets checked enough in a certain period of time during a match your players will start openly brawling with the opposing team, spraying blood all over the ice. Eventually, if you win the fight, one of the opposing team-members will be seizing back and forth on the rink spraying blood, too injured to continue playing. Some injuries are minor, only seeing the player out of the game for a short amount of time. Others are fatal. If anyone on your team is on the receiving end of a fatal injury in Franchise Mode, they are forever gone just like in real life or Fire Emblem. 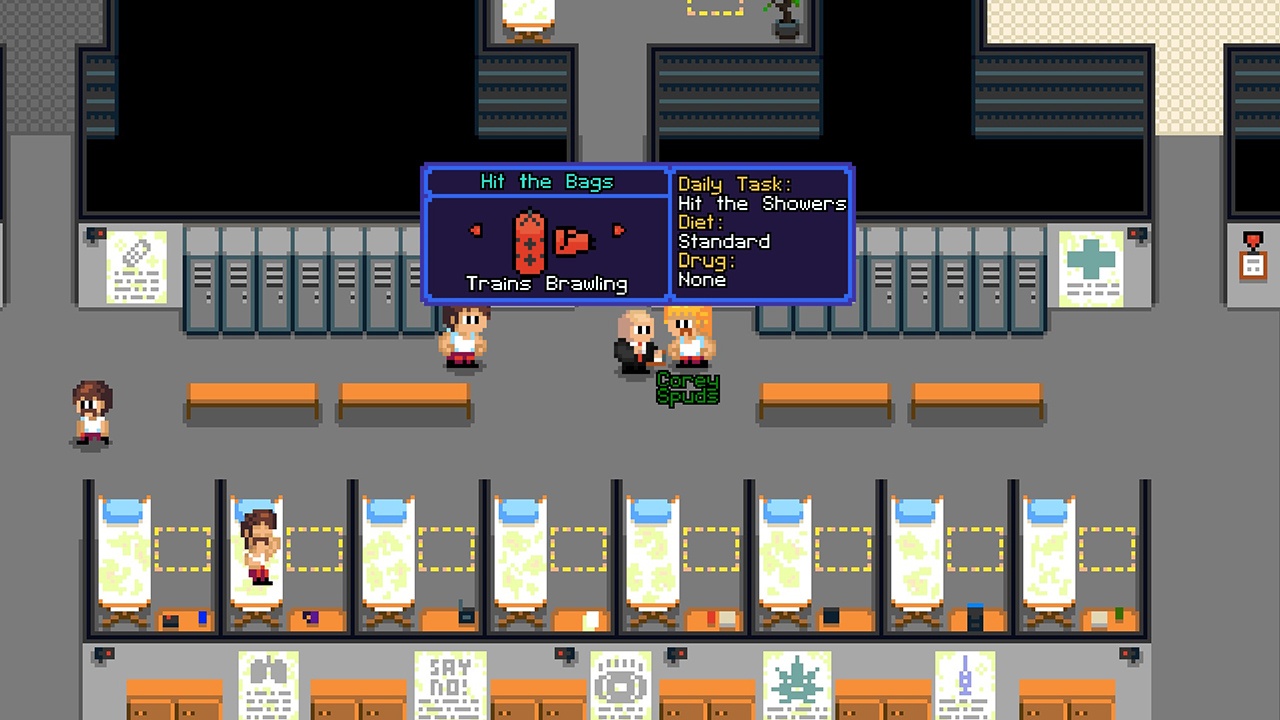 In addition to Franchise Mode, there is an Exhibition Mode, a Tournament Mode, and a Challenge Mode. Every mode allows for multiplayer co-op, although only Exhibition features PVP.

“Super Blood Hockey” is so much better than expected that I feel good about saying that if it sounds like something that you’re interested in, you should just bite the bullet and grab it. The graphics are hilarious, going so far as featuring an option to adjust the bloodiness of the proceedings. It looks and sounds like an NES game but features far more depth than any NES sports game in Franchise Mode’s campaign. There’s a huge amount of replay value in the multiplayer. Obviously an 8-bit hockey game with copious amounts of gore isn’t everybody’s cup of tea. But if it is your cup of tea, well, this is the only one and I have a hard time imagining somebody doing a better job of it in the future.