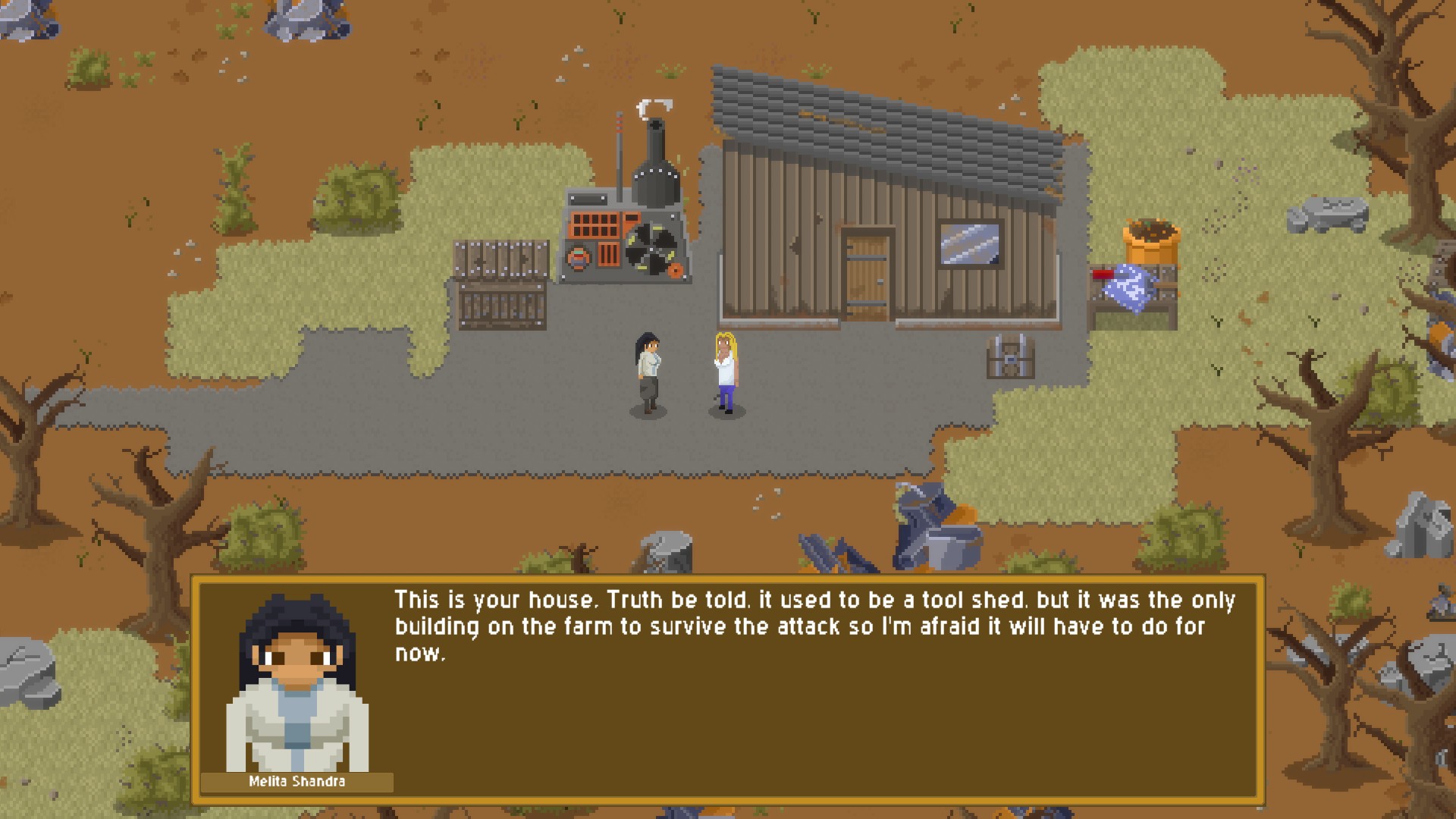 The last farm is a single player, 2D pixel-art farming simulator and a solo project made by, Works in Theory. The game was available on steam under early access, however according to the devs Twitter account as of November 20th, development of the game has currently halted due to not meeting the financial targets needed to continue. Personally, I feel this game is very much worthy of a review regardless of its current availability and hope to keep updated of its future progress.

The game is set in the town of Riverside, in a world left barren and in a perpetual cycle of desolation, destruction and regrowth. You join the town as the new farmer and your mission is to revive the farm and save the townspeople from starvation. No pressure at all, right? 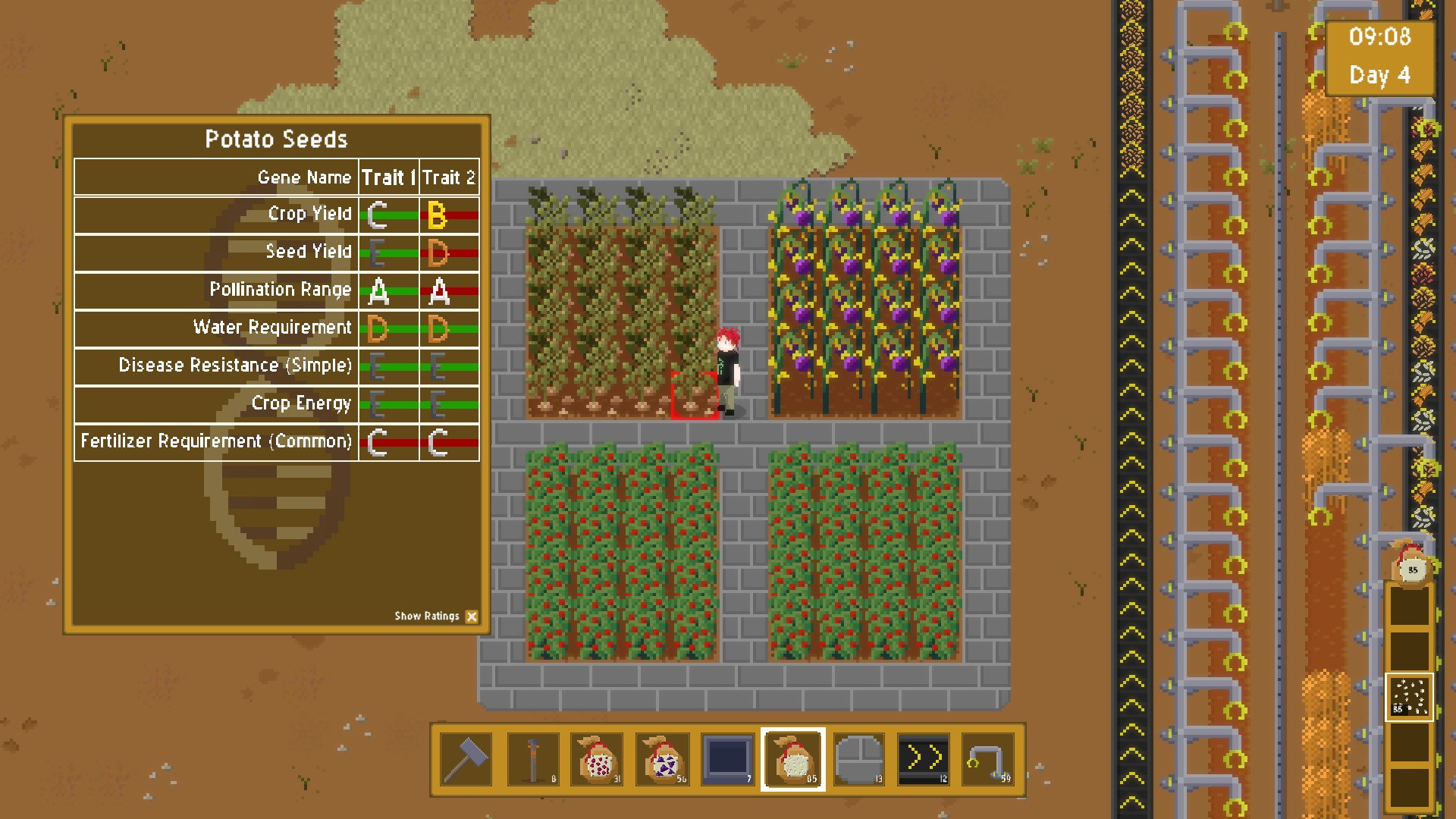 Once through the initial cutscene and the intro of the game, you will be left alone on your very untidy and barren farmstead. You’ll have a brief tutorial on how to move and interact with things and then you are good to go! A couple things to note from the start though is the intro dialogue. The head councilwoman will tell you the time of the council meetings (10am, for those who missed it) and that these are important and also to “meet the townspeople if you can spare the time”. While this first council meeting triggers a cutscene, I am yet to see anything happen after that initial meeting. As for the note about meeting the townspeople? This one is actually more important than you would be lead to believe since you can’t progress through the game without talking to at least one particular member of the council. Once you’ve gone through the basics you will be instructed to check your journal which will provide further details on things that happen and is updated throughout the game.

If you’ve read this far and are looking for something to compare this game to, I would definitely say this has a deep Stardew Valley feel to it, but with a vastly more detailed way of farming. The game only has one mode which is the main story. It also has no difficulty settings, but from everything I’ve experienced so far this honestly wouldn’t be needed. The controls are simple and the menus, toolbars, etc… are all easy to navigate and well put together. In all, The Last Farm, isn’t a hard game to play, but it can be hard to figure out what you’re meant to be doing. Not much is explained about aspects of the game and this can lead to a bit of a hindrance in progressing. For example, you can buy schematics for conveyor belts, irrigation systems and so on, but as I discovered, you can only read these while standing on the farm. I’m not sure if that was a bug or an oversight, but it wasn’t until I had been walking around the town with those schematics in my inventory a full day that I happened to try it again by chance and suddenly it worked! It’s a small and silly detail, but sometimes those can be the ones that cause the most frustration. I feel once you’ve got a fair grasp of everything this game will have a great replay value too, but a little more instructional dialogue would a welcome addition. 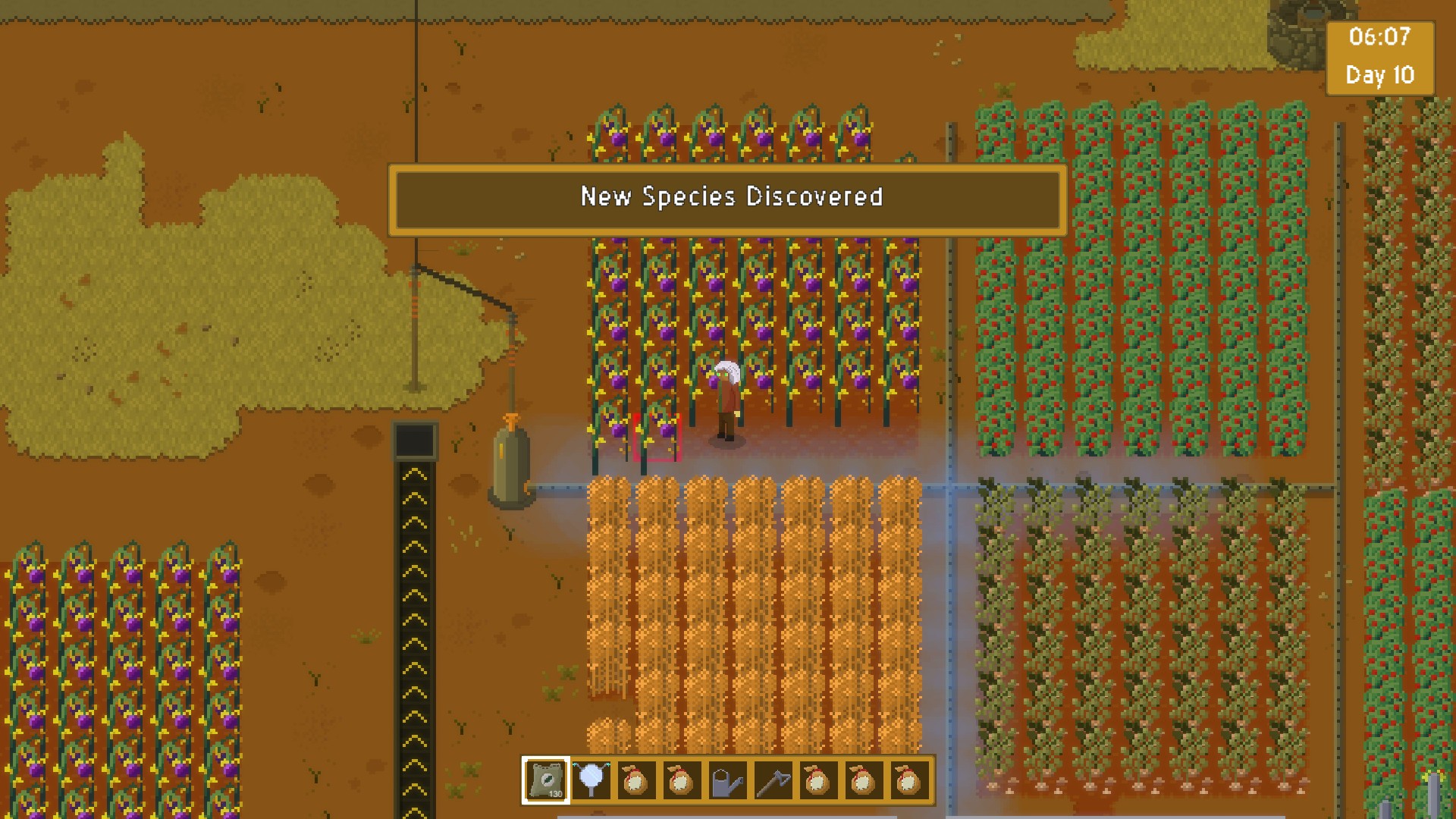 As I said previously, this game strikes a close resemblance to Stardew Valley with its general gameplay style. You can farm for produce, talk to the townspeople, buy upgrades to the farm etc. There is even some combat, but without so much as a death animation, the enemies just blinked out of existence and hilarious as it was to witness, it really shows how much work there is still to do in this game. The 2D graphics are as basic as they get and the music is good but very limited and the only other game sound I’ve noticed is from the watering can. From what I can tell this is very early stages and being made as a solo project so I wouldn’t expect every feature to be outstanding from the get go. The one shining light that this game has, however, is that it shows promise of going into much more depth with its farming than Stardew Valley does. If you’ve played the game for more than a couple (in game) weeks, then you may have discovered the blight storms. Not much is said about these other than they will bring disease and viruses that can affect crops and it hints at developing more resistant crops. This is one of the big features that the game has to offer, but again being so early in development, there’s not enough explanation on how this works to really get into and understand what it all does.

The Last Farm is as bare bones as it gets, but it has a decent balance of complexity and simplicity in its gameplay. There’s a decent amount of features in this game and it would be a terrific game with more fleshing out and better dialogue and although it’s tough to judge a game so early in its developmental life, the game has a lot of potential and I would love to see more develop from this.