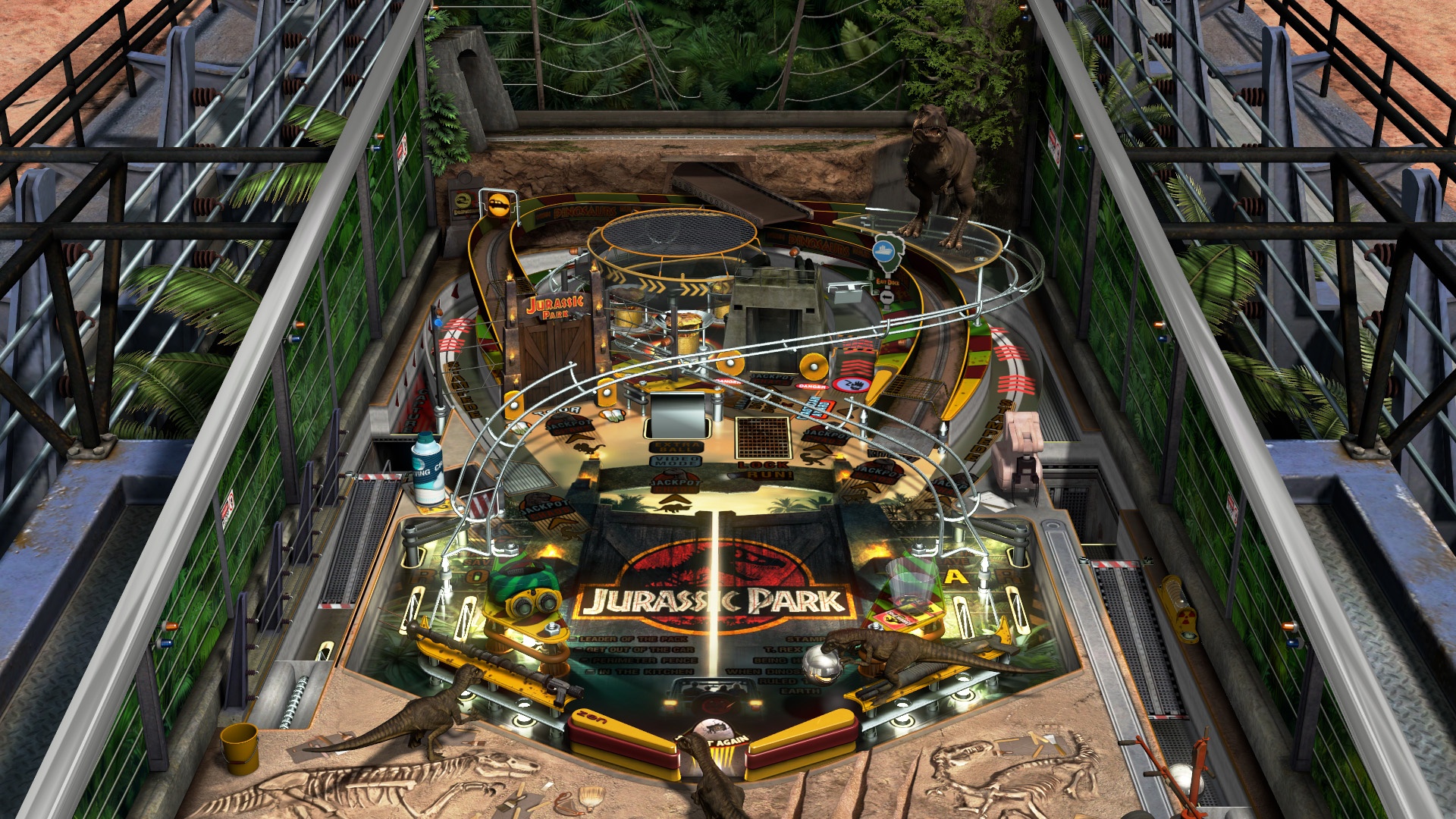 It’s been nearly twenty five years since the release of the original Jurassic Park, a movie that helped to both reignite the passion of people’s interest in dinosaurs and show that Hollywood had finally made CGI a legitimate resource to consider in their filmmaking. Sure, there had already been patches and instances, but a majority of it tended to look incredibly fake or, at the very least, cartoonish. Now, in 2018, Zen Pinball has decided to collaborate and make a set of three wonderful tables to best capture the magic and the thrill that came with Jurassic Park, it’s sequels, and the upcoming Jurassic World: Fallen Kingdom.

The first table, based around the Jurassic World franchise, is, unfortunately, the weakest in the set by a long shot. Attributing a lot of its design and innovation to the reboot of the series, you play the role of a tourist who’s now trying to survive the onslaught that comes after the park goes completely haywire. I know this because there are a huge number of sound clips peppered throughout of Chris Pratt screaming at me and the annoying children of the park manager who were shoehorned in to try and re-capture the magic of the first movie. The table itself is meant to focus mainly on the central character, Indominus Rex, the hybrid super dinosaur who was still ultimately felled by the fan favorite, the T-Rex. Due to Indominus’ size, the entire table feels really small and cramped in comparison to what could be for a table that has the word “word” thrown in.

Don’t get me wrong, as a purely fictitious table (the term I give to Zen’s physically impossible designs), there’s a lot to love and appreciate. The lighting and effects give a ton of foreboding and elemental influence, and the appearance of the velociraptor’s trigger a mini-game mission that simply couldn’t exist without a lot of pinhole precision choices you wouldn’t be able to do in any state. Additionally, this is another table that focuses a lot on the plot line, so you’re able to actually play through and activate missions that take cues from both the original and the upcoming Fallen Kingdom (but not too many, wouldn’t want to spoil the movie). And, for fans of crazy ramp shots and difficult angles, this one has probably the hardest curve in terms of being able to activate and maintain bonus multipliers. As a result, it’s something that is simultaneously only for fans of pinball and the movies, which, I feel, carves a very small, niche slot. Still, it’s important to note that, as a “weak” table, it’s still one of the stronger ones I’ve played (and certainly leagues better than anything from the MS-DOS era). 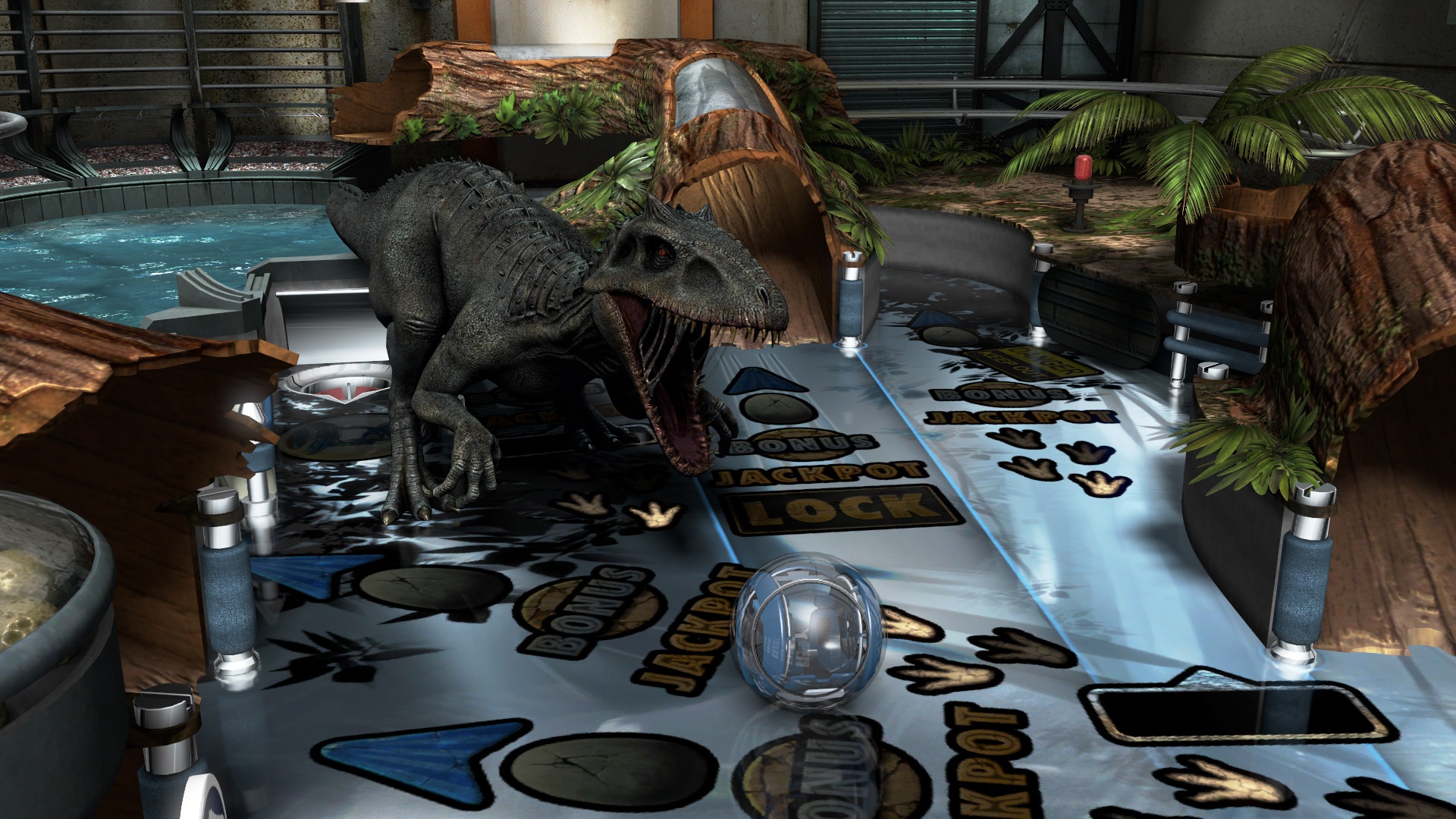 The second table is the crown jewel of the collection, the original Jurassic Park. Far from simply copying the original table that Data East made back in 93, this sprawling table feels like the perfect combination of dreams and reality, much like the original movie itself. A long table, we have the presence of both the stegosaurus and the T-Rex himself front and center, with a hidden alcove of bumpers hidden in the back and the infamous third flipper waiting on our right side. Much like the Jurassic World table, this one is also heavily laden with sound clips, but the focus is more on the adult characters that we know and love (Dr. Hammond, Nedry, etc.) which makes it an instant nostalgia trip for people who were kids or young adults at that time. I think that’s something Zen should definitely consider moving forward: a lot of pinball fans tend to now be in their 30s or 40s, and I enjoyed the hell out of that ET table, so maybe keep playing up the nostalgia element?

Besides being colorful and energetic, the Jurassic Park table also kept a good balance of difficulty and skill. There were several times where I had to get trick shots that relied entirely on the third flipper, but there wasn’t usually a time limit for those windows. The missions, all grounded in the first movie (to hell with the sequels), all were enjoyable and exciting, like hitting ‘raptors out of the windows, or evading the iguanodons who were trying to steal my ball. Incidentally, if I get any of the dinosaurs wrong in my review, I implore the amateur archaeologists to correct me, because it’s the only way I’ll learn. In any case, what you ended up with was a table that really felt like it was drawing you in, and losing only made you want to keep going further, which isn’t something I can always say for the short tables. But hearing the dramatic music and the vocal “Welcome…to Jurassic Park” got me in the mood in a way I couldn’t find in any of the other tables to date.

Lastly was the incredible and rather interesting Jurassic Park: Pinball Mayhem. Perhaps Zen has realized that pinball isn’t exactly baked into the blood of every single player who graces their games, because this felt more like a training table than anything else. Coming in at a middle range, this felt like a game that could have been based on the Jurassic Park ride that used to be at Universal Studios. Just as colorful as the Jurassic Park table, this one prominently features the safari Jeep that carted around the kids in the first movie and also carried my ass around several family vacations. In this table, the objectives are clear: they’re so clear they’re practically transparent. Far from having to do any reading, the “guide” explicitly screams to you every time a new mission or bonus opens up, and there wasn’t a single point that I became confused about my goal or what needed to happen next. 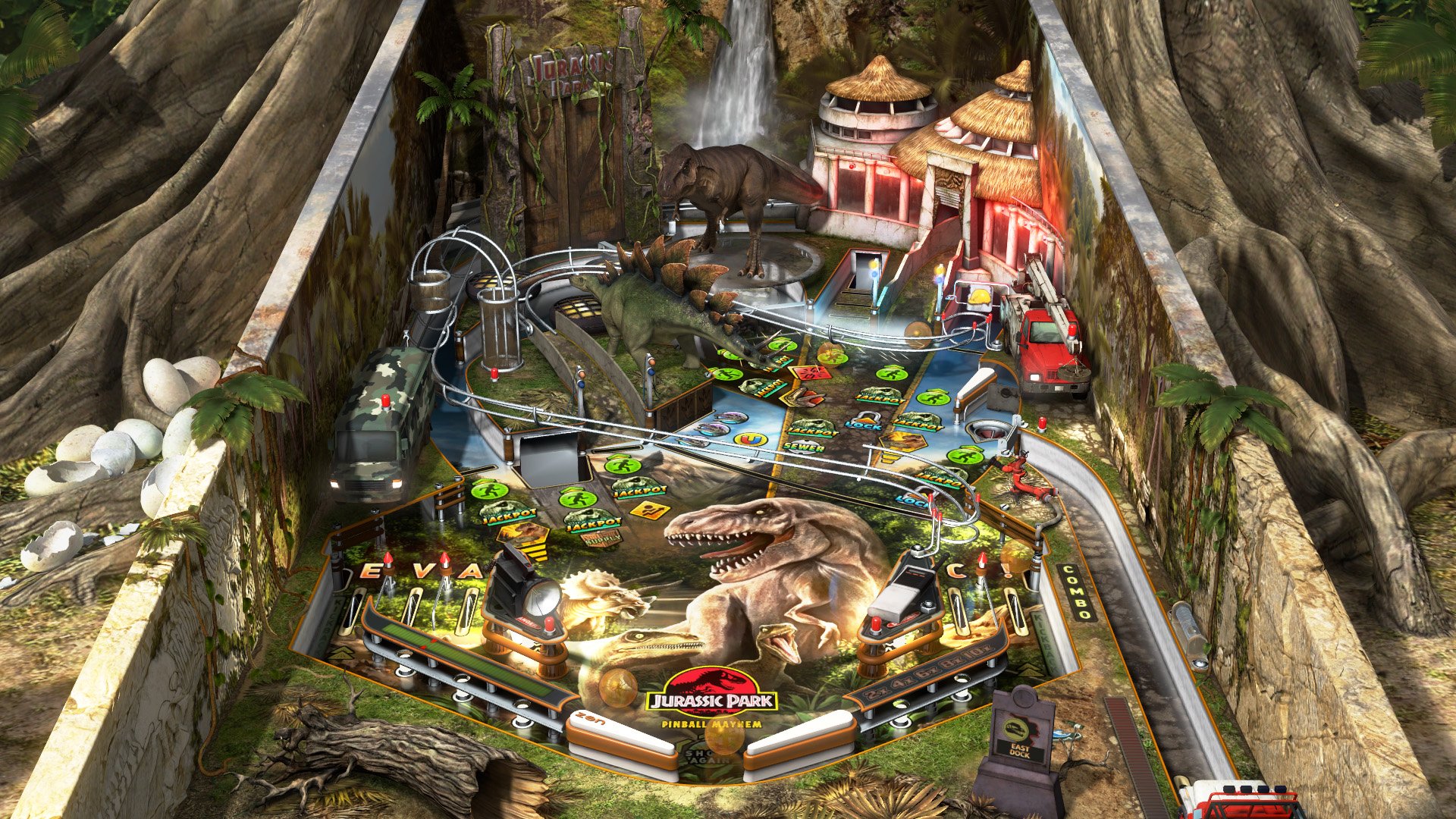 In fact, as a result, I sort of hope this table becomes one of the free standards for Zen in the not-too-distant future. There’s plenty that’s simple and straightforward to anyone who’s spent a lot of time at the bumper tables, but that generation is growing older and it’s harder and harder to find pinball machines at locations that aren’t also bars. This table is a wonderful guide, letting players know what they’re supposed to be doing and how they can “win” without holding their hand (after all, you still lose your quarter, this isn’t magic happy hour). The announcements and indications let me focus exactly where I needed to shoot next, and the elements of Jurassic Park kept me interested and engaged. There were still dinosaurs, traps and time limits, but I felt like I had a partner along for the ride instead of just someone quoting things at me while I flippered around frantically. It was a great experience, and one that even my kids seemed to enjoy.

Zen continues to raise the bar on what it takes to be an engaging pinball experience, and the Jurassic World pack is certainly no exception. Even the weakest table is still a great joy, and probably will be even more fun once I finally get a chance to see Fallen Kingdom this summer. In the meantime, if you need your fix of dinosaurs and pinball, this is a fantastic DLC, and your cash would be better spent here than hunting the countryside, trying to find a physical copy of the original table that isn’t broken or rigged.