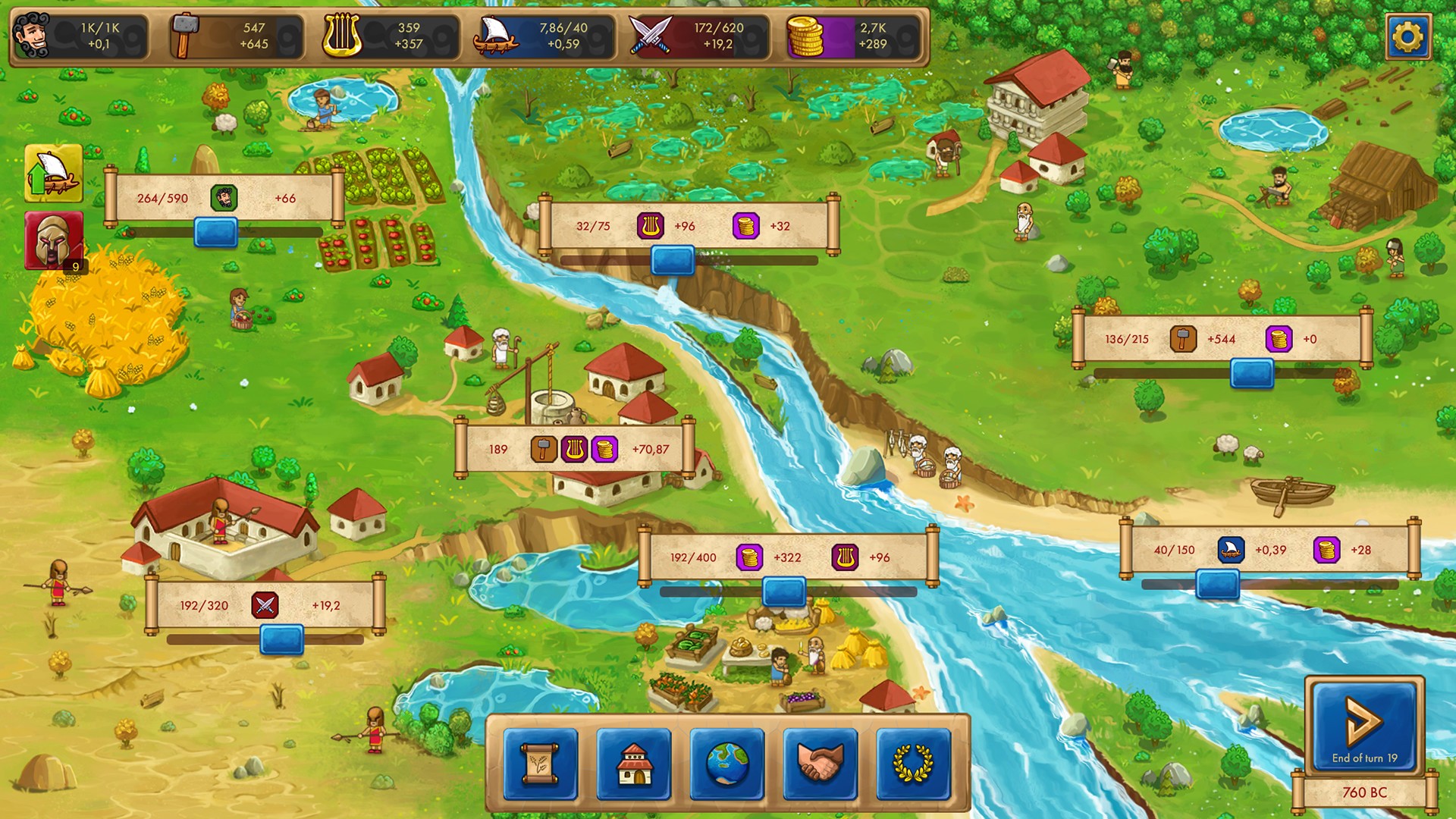 I love city builders and sims – from Cities: Skylines to Tropico to various tycoon simulators. If it is historically based, even better. My Steam and Epic library are full of builders. I read the preview of Marble Age: Remastered and thought this would be a great post for my first review for Bonus Stage. My optimism was misplaced.

Marble Age started on Steam in 2015, and Kongregate shows a variation advertised as an Android game on September 2017 (page since removed). It was remastered and re-released on Steam on November 2020 and is available for Windows (7), Mac, and Linux/SteamOS. Since I have not tried the original game, this review will be based on the remastered version as a stand-alone product.

When we start the game, we have a very basic settings area, where you can control the resolution (1900×1080 is highest available), audio controls, and save timings. There are also links for Support (opens an email window), website (opens a browser window) and Authors (list of the creator team.)

During the tutorial, we choose between 3 Greek city-states, each with a different inherent strength – Athens (diplomacy), Corinth (mercantile – not recommended for new players), Sparta (military). Each city has a choice of 6 bonuses (different options available depending on which city selected). This will later be referred to as paradigms. I took the diplomatic path and chose Athens. 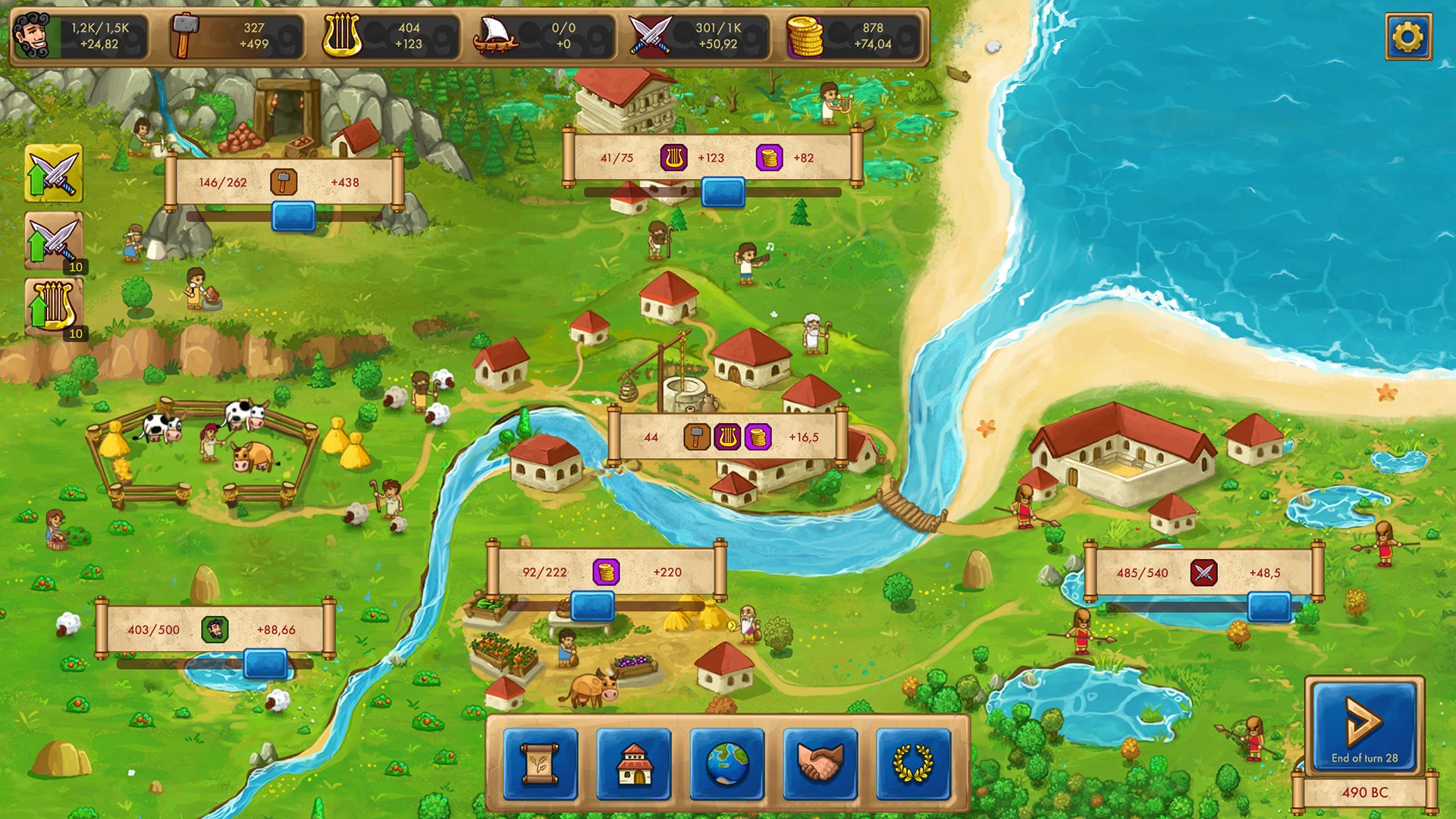 From the main page, there are 5 tabs along the bottom – the technology tree, the new buildings, world manager, neighbours (political status with fellow city-states), Polis (City Stats). As this is a turn-based game, In the bottom right there is a button to advance to the next turn. The upper part of this window, you can check your population limits, finances and other typical world-building stats.

One key stat is the culture points (the icon is a lyre, and will be shortened to CP here). These are used for researching new technologies, buildings, and improvements. This resource, like most others, is initially generated by having population working in the town centre when others are working various specialist facets of a city, such as farms (food for population growth). Early in the game, it is essential to generate as many CP as possible, while still keeping enough farmers producing food for your population. Other resources (production to allow you to construct buildings, gold to maintain buildings and your army) will become important as the game progresses. Turn 14 was my first major event, the Minoan Eruption, which resulted in CP being negatively affected (-30%) for 10 turns. This happened during multiple plays, so I am thinking the game has timed events that will happen consistently each time. This, I assume, is a major part of the advertised historical accuracy. By the 16th turn, I unlocked 2 neighbouring cities on my World Map. Sending envoys with gifts and cultural exchanges can gain you extra CP and other rewards. However, you generate only one envoy every few turns, and your standing with other cities degrades rapidly.

Playing through the tutorial, I nonetheless found myself short on CP. There was little I could do for several more turns, beyond seeing reminders that I was at the maximum population. Around twenty turns in, the game prompted me to make a tech purchase – “Learn a new tech – Physical Training” – the research that allows you to start building a military. This was problematic since I found the mechanics of increasing my population and managing resources unclear and had been focusing on food, which left me far short of the 100 CP required.

I was invaded during turn 30 and was against a far superior force – the Dorians. I had the options of Fight or Retreat. With no military to speak of, I ran, which had serious consequences. On the same turn, I had to choose a husband for my daughter – a Spartan to form a military alliance or Corinth to form a merchant partnership. Again, I made another bad choice. 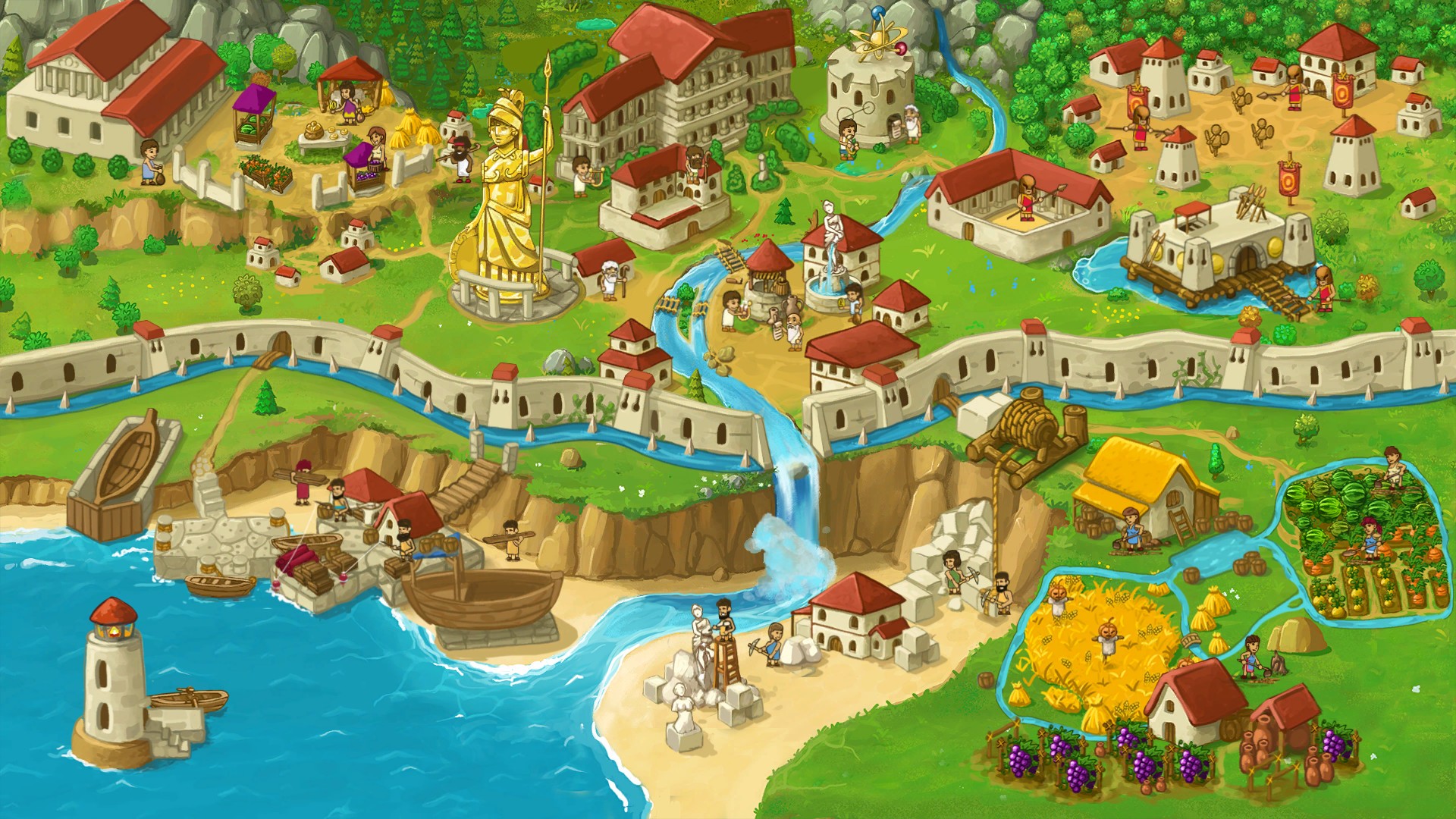 The next thing I saw was: “Trial has failed – you have failed the trial and your settlement was destroyed. To pass the trial have 100 people and have a gymnasium. Dark Ages – after the Dorian invasion, people went savage.” My population limit at the time was 29 and the gymnasium was one of the many buildings I couldn’t begin to afford.

30 turns (in the tutorial) and my civilization was killed, game over. I played the game a few times, and also had my world-building and history-minded writer friend, who also loves simulation and 4X games, try it out so I could ask for her thoughts.

We both found it tedious. On many turns, I was clicking “next” with no options available to do anything – even when aware that the clock was ticking on the next scheduled catastrophe. Those scheduled challenges are not properly balanced for your resource or technology levels or in any way slanted towards the different play styles apparently offered by the different starting cities. Regardless of which one you start with, you are going to be facing a substantial military force extremely early in the game, and an overwhelmingly huge one not much later when Persia attacks. The game therefore seems to have an inherent strong bias towards Sparta, and playing as either Athens or Corinth doesn’t so much allow for a different play style as start you off at a significant disadvantage. Sadly, the tutorial offers little or no information on how to play, strategy ideas or suggestions, or the consequences of various decisions. Scenarios that arise offer choices that you have to make with little or no information on what those choices actually are – and sometimes the phrasing is so ambiguous that it’s difficult even to guess. Even after playing it a few times, we’re both still uncertain about many of the mechanics and other elements and how they work. It should also be said that the CP costs of research are uneven at best and sometimes so expensive as to be impossible to reach early in the game, even when they’re clearly essential to successful progress.

On the positive side, once you get the hang of it, it’s relatively easy to allocate your citizens to various specialised tasks, via the simple slider on each of the various production buildings around your city centre. The graphic style is cute and clean, although it very much shows its origins as an Android game. The historical events may be in fact accurate, although I didn’t actually check in detail.

This game will definitely have its fans among people that like this style of world-builder. It could have worked as a casual and fun experience. However,  with the lack of any direct military control or strategy, the rapid aggression of a poorly balanced AI feels excessive and jarring. If you are looking for something as in-depth and dynamic as Civ or Age of Empires, or as light and relaxed as Townsmen … you will be disappointed.