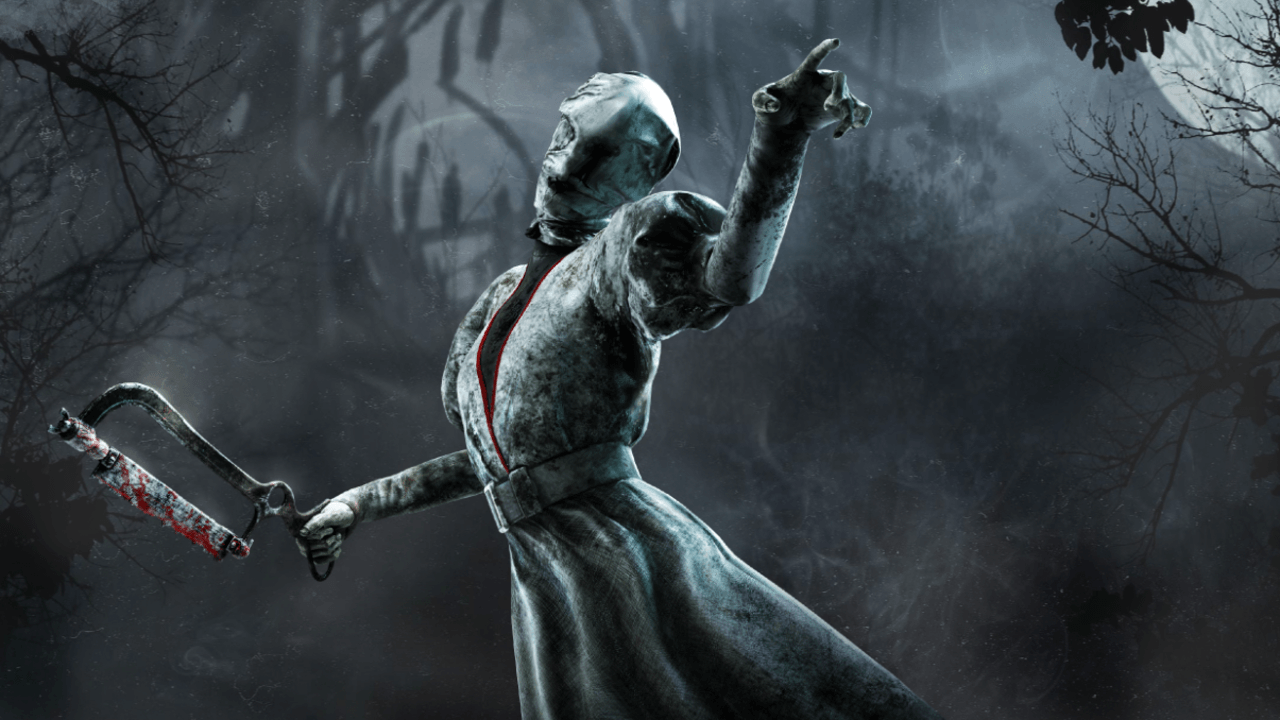 Scary movies don’t bother me, but first-person puzzle types or action games tend to put me on edge as they can be unpredictable – especially if with other players. It didn’t get off to such a good start with Dead By Daylight when I realised it was online only. Sure, it is evident that this was going to be a horror game, but the temptation of being able to play as Pyramid Head was too much to ignore. If you’ve been able to fluke yourself a PS5, you’ll appreciate that most of the games you’ll be playing will be from your PS4 library unless you’re made of money. Fortunately, for existing owners of Dead By Daylight, there’s a PS5 upgrade. Not having this to hand the first time, I played the PS5 version, which was super duper in loading times. Mostly.

The premise, if you’re unfamiliar with the game, is to play either as one of four survivors that have to escape the clutches of an evil entity, or vice versa and play as the monster that hunts them down. Both options vary quite dramatically as the survivors work together for a common goal of fixing generators and escaping the murderous villain. At the same time, the latter has to cut down each survivor and hang them on a hook as a sacrifice to The Entity. It was quite a hefty download, so while this was going on, I experimented with both tutorials, and clearly, the bad guy option was my favourite. But let’s start with the survivor game first of all.

As a survivor, you have to use stealth to avoid your pursuer. Note that the enemy can’t be killed or harmed, but you can throw obstacles in their path to get away. Each map will have several electric generators that need to be repaired, once completed, a lever to open the exit becomes available to reach safety, and that’s pretty much the goal. Players can use stealth to sneak around, and it’s mostly useful unless you startle a crow, walking into a bear trap or two, or trigger off noises from the generators.

To fix one, all you have to do is stroll up next to one and hold the trigger for a painstakingly slow gauge to fill. Yes, it adds to the tension, but it’s a little infuriating as you’ll have to press the L1 button to hit a series of QTE. If you miss them, a large bang occurs, alerting the killer to your presence. The timing is pretty harsh as well, so expect a few mistakes – much to the killer’s delight. 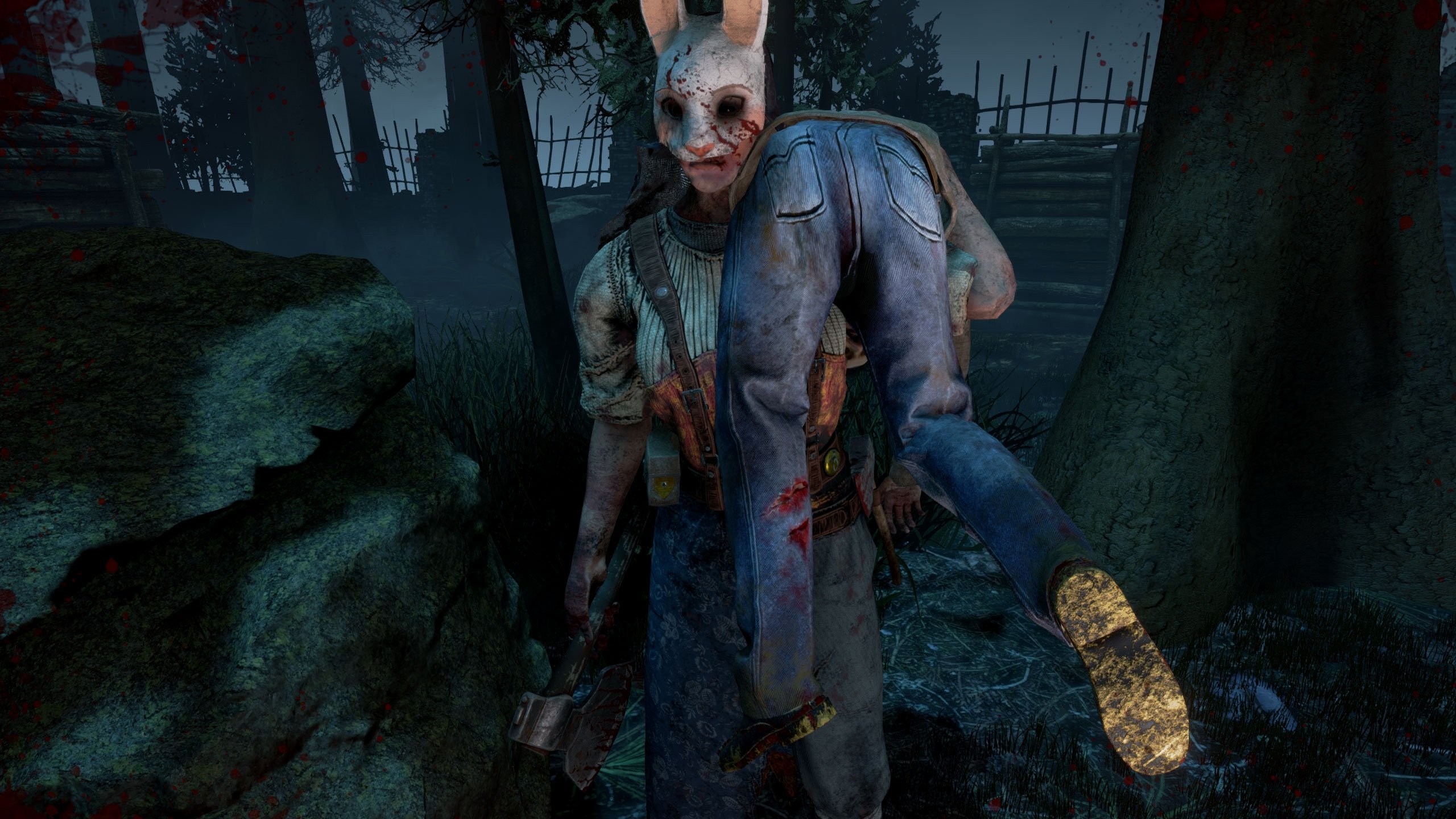 Chasing down these survivors is from a first-person perspective (the survivors are in third-person to give you a wider angle of what’s going on). L2 will trigger the killer’s special, such as the Trapper leaving numerous bear traps in the paths of proposed victims. Other than that, you’re mostly scouting around looking for movement and listening for footsteps. With a swipe of the R2 button, your killer will use their weapons (or claws) to slash at the victim, who can take two hits before dropping to the ground. The first hit will wound them, making them pant more (all the better for hunting), but they can heal themselves with a medkit. If you manage to down a survivor, you can throw them over your shoulder and place them on a hook to sacrifice to the gods. The longer they’re held, or even better, until death, you’ll build up XP and unlock loads more goodies.

By the time the game installed, I was eager to go and opted to play as the killer. As someone not keen on online play, I wanted to work alone without having teammates shouting in my ear, but I didn’t encounter any voice chat anyway, so that wasn’t an issue. What surprised me was how much fun it was – even with loss after loss. Survivors don’t have to work together, but they do, and for every rare occasion where I was able to down one and hang them up, another would distract me while someone else would rescue the hanging, almost lifeless body.

A real shocker, but that made it even more fun. It’s like one of those playground games where you’re ‘it’ and feign a stitch or similar, then with a quick burst, chase after whoever stops. Interestingly, a lot of players will hang around to taunt you, so it’s so satisfying to get them this way, or perhaps when they throw an obstacle in your way, only you to flank them and kill them that way. 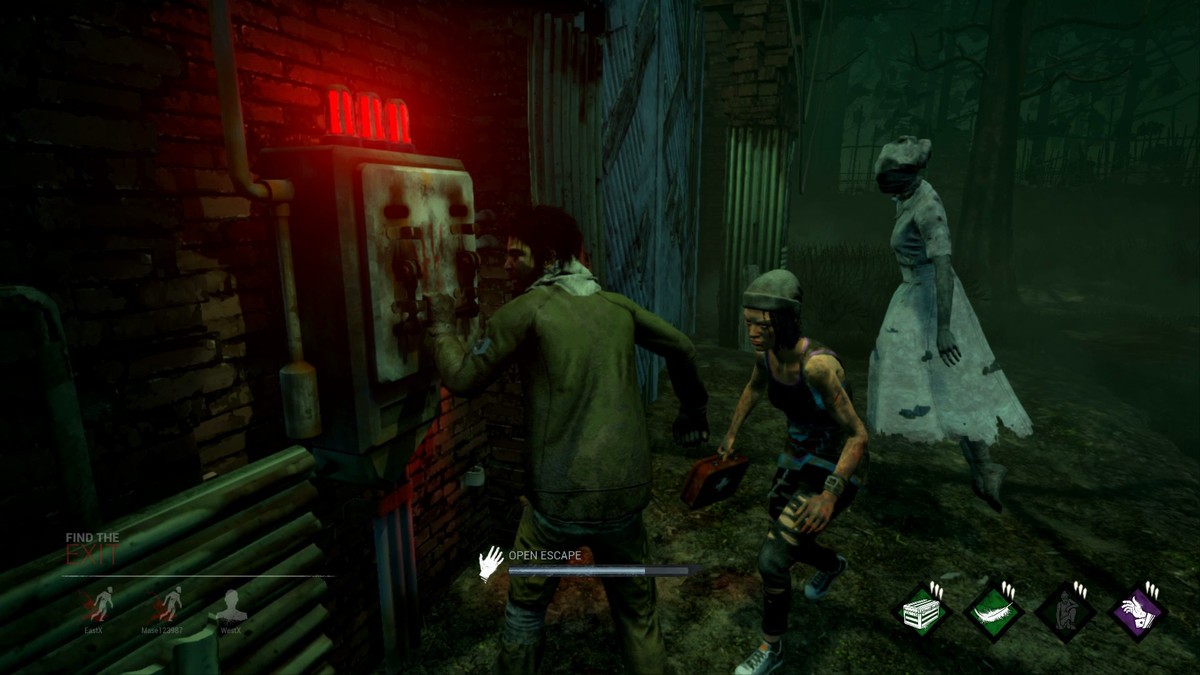 While securing a win as the killer can be incredibly hard, your mania is rewarded, and you begin to unlock perks, new gear and can also compete in challenges to fast track progress if you tick the boxes. After a fair share of online games and not having a favourite character other than tapping into potential fears of other players by being a killer clown or WWII nurse, I hopped on over to the store to see what was up for grabs.

I’m not a big horror fan, but I’ve seen most of the classics and, of course, have my picks. They’re very well represented here with some official ones such as Michael Myers, Leatherface and even Ash from Evil Dead. The unofficial characters exclusive to the game were even better with some oni-samurai types, abominations – you name it. They were excellent designs with plenty of skins to unlock and supplemental bios, but they do play out quite similar to one another, with some a bit trickier to handle than others. I can’t say the same about the survivor list and had a bit of a bias to the baddies.

When reviewing games, especially multiplayer-based games, the servers are often sparse and not covered in the review as there are about three other reviewers online and never available. This would be fatal for a game like Dead By Daylight, but as it has been around for a while now, I never had problems in finding a match. There’s only one killer, so that’s easy enough to fill up, but you’ll sometimes have to wait for the inevitable player who insists on changing their loadout while others are waiting. This doesn’t take too long, but the loading screens do drag a bit. I don’t know how this works – whether it’s the game or the collated internet connections. Perhaps it’s the system the others are playing on as I believe that this is now cross-platform. I ignored who was playing what, though. I was in it for the killing sprees.

REVIEW CODE: A complimentary Playstation code was provided to Bonus Stage for this review. Please send all review code enquiries to press@4gn.co.uk.

Dead By Daylight is the opposite of what I look for in a game: horror and online gaming. With that in perspective, I have to say that this was so much fun. The piggy in the middle experience wasn’t a deterrent and just made catching a survivor more satisfying. An enjoyable deathmatch type game with some excellent villains.