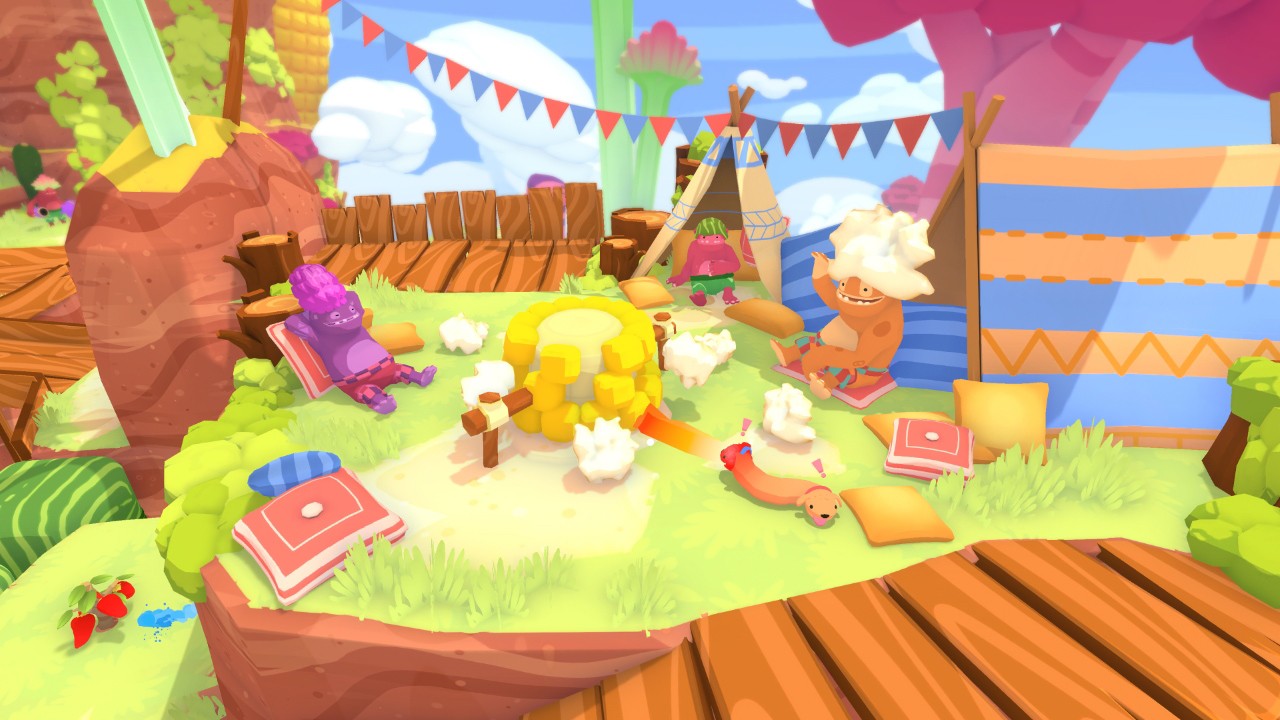 The world of 3D platformers began for me on the N64 and PS1. There were some amazing titles released, and some of them still give modern games a run for their money, because of their graphics and gameplay, well mainly gameplay, as modern games look stunning. If any developer can capture that magic of the late 90s, early 00s 3D games, and bring in a modern day twist, they would be on for a winner, and would earn themselves a lot of money, and legendary status amongst gamers. So, with this in mind, I was asked if I would like to look at a game that I was fortunate enough to try at EGX in 2019. PHOGS is a 3D puzzle/platform game about a two-headed stretchy dog, his/her aim in life is to walk around different worlds, hunting out golden bones, and little alien creatures known as Boingles. The game has been developed by Bit Loom Games, and is published by Coatsink.

Your two-headed hound loves to explore and uncover the many secrets that hide in the worlds that it must venture through. Your journey allows you to see 4 different landscapes, each with its own theme, and gameplay mechanics. You open the action in a basic training land. Here you will learn how to control your beast, and what is expected of you. You will collect the first of your bones, and you are free to spend these on new hats straight away from the shop in the lobby. Yes, you read that right, you can buy your two-headed dog hats to wear. You can match the pair, or you can throw caution to the wind, and dress each up in a unique attire. Once you’ve gotten over the excitement of the hat store, it’s down to business. You must choose a zone, and your options are; Food, Sleep, or Play. Each has several stages, containing its own surprises and collectibles.

The great thing about playing a 3D platform title is the freedom that the developers have to play with perspectives, and how we as gamers must look at solving the problems in front of us. PHOGS uses this theory perfectly. You must look at the surrounding surfaces, as you concentrate on them you note that not everything is as it seems. The walls become walkways, and as you approach, your dog will stroll up the wall like one of those optical illusions. When you first experience this, it can disorientate, and it took me some time to get used to. But once you’ve got over the initial shock moment, your eyes adjust to the oddity of the world around you, and you see paths that would have been invisible before. 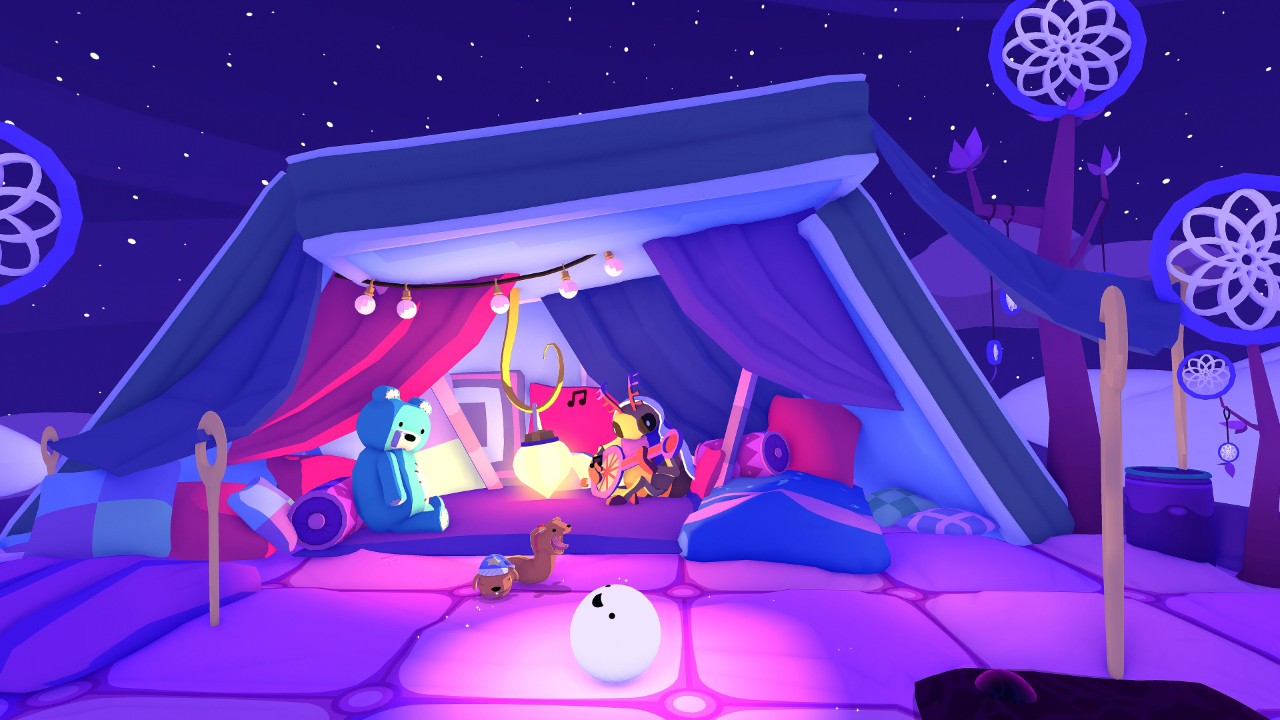 The dogs have a small amount of actions available to them. They cannot jump, and being attached to another dog has its limitations, or does it? Like Stretch Armstrong your creature just keeps on stretching. A gap in the floor, nothing to worry about. Need to swing from post to post? Again, our dogs have that covered as they each grab a pole with their mouth. This two-headed problem solving mutation is nothing short of a genius, and every problem can be overcome with a small amount of logical thinking. As well as stretching, the hounds must manipulate the world around them using the power of light. Many of the puzzles require you to use light orbs to destroy walls of darkness, or to create bridges of light. The list of obstacles and gameplay mechanics goes on, in fact there are far too many to mention. Each unique area has its own special twist, and you will discover how each impacts upon your problem solving approach.

The main joy of this game didn’t come from the ridiculous nature of having a two-headed dog at your disposal, or the purchasing of many hats, though this was lovely. It came from the choice of playing it solo, local co-op, or online co-op. I spent most of my time playing online co-op with my friend Sean. The language and laughter while playing was expressed in equal measures, though a lack of communication, and many an obstacle caused heated debates, and tantrums. This is a game that I can imagine would cause a lot of arguments if you played with a loved one on local co-op mode. If you take out the heated discussions, you were left with were two gamers who had a great time exploring with their dual-headed hound. Not only does this test your problem solving and logical thinking, but it also puts your teamwork and communication skills to the test.

So we have a game that has touched upon the magic and fun that you found in early 3D platform games, but how about the look, and style of the title, does it excel in this category? Unfortunately, no! I loved how the game played out, it was unusual, took a bit of getting used to, and was great solo, and with friends. But what I couldn’t get used to was how dated it was. It doesn’t appear polished around the edges and doesn’t take advantage of the power of modern day consoles. The colour palette used was bright and inviting, but was reminiscent of those early genre titles, and therefore emphasised the dated look. Graphics aren’t everything, but I expect more from a modern day title.

When I first saw the advertising for PHOGS I was instantly attracted to its colourful nature, and that it didn’t take itself too seriously. This light hearted and fun feeling runs through the music and sound effects, where high tempo jovial songs play in the background of the levels, and you control the barking of your dogs as they walk around each stage. It makes little sense, but you can’t help but smile as you take on each of the challenges. The audio for me was one of the best elements of the game, it sets the scene, and matched both the theme and the genre of this title. 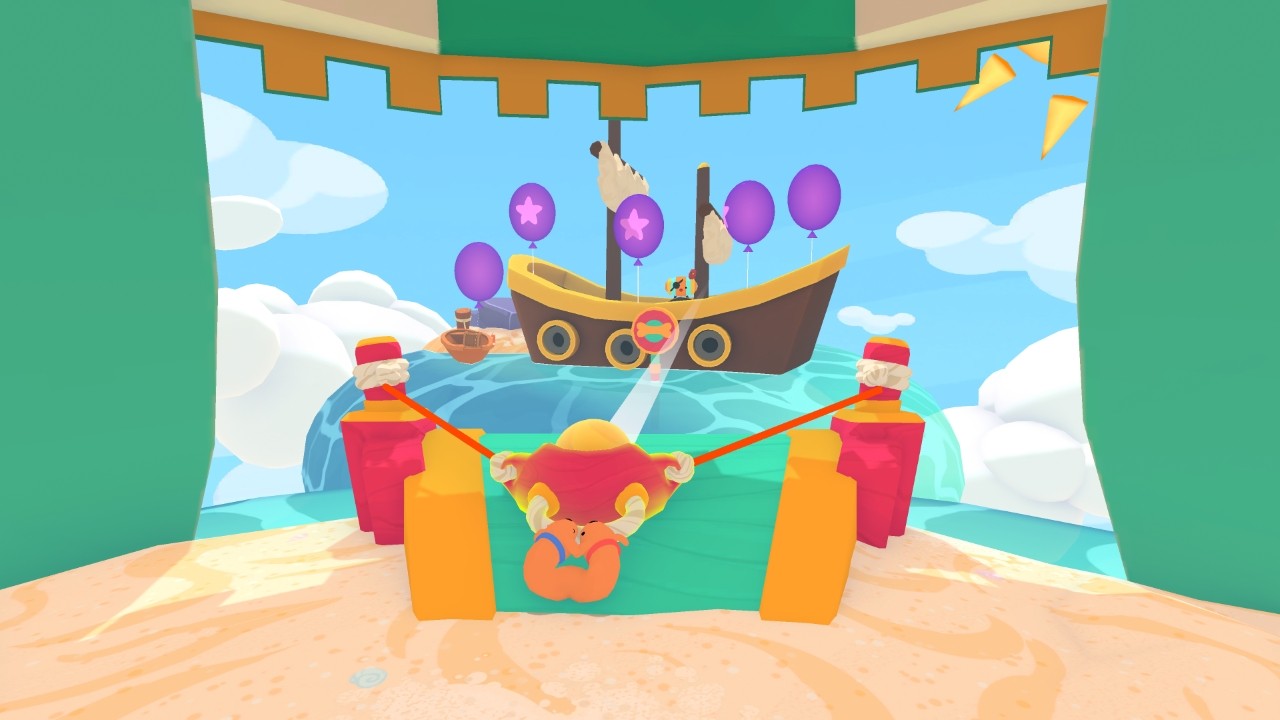 As I’ve already mentioned, your dogs don’t really do a lot, so the controls should be simple, right? Mostly they are, and playing with someone else makes it much easier, until you fall out, that is. Playing solo is where it all goes wrong, as you have to divide your mind in two, making sure that you remember which button controls which head. It’s not impossible, but it can be very confusing, and when you forget, catastrophe is just around the corner. I fell to my death several times when I let go while swinging across a chasm. It was sad, frustrating, and amusing, all in equal measures.

One element that PHOGS does well to replicate from gems of the past, is the replay value. With many collectibles to find, lots of different gameplay mechanics to master, and the enjoyable nature of each different stage, there is plenty to make you come back for more. A complex achievement list will make this a tough game to obtain the 100% status, so much so, that after 5 hours of playing I had unlocked only 1 achievement, though this might represent my skill level, rather than the difficulty to unlock them.

Did I enjoy my time playing this game? I absolutely did, though, I was left wanting more. The gameplay is fantastic, the ability to play couch co-op and online is refreshing, and the challenge of each world is balanced perfectly. My only complaint would be that it doesn’t look like a next generation title, and this made everything look and feel dated. Do I recommend you play this? I do! If you have a young gamer in the house, this would be a perfect title to share some gaming time with them, or if you have a friend, you like to fall out with, then you can easily shout at them throughout. Can you hunt down all the golden bones and Boingles while attached to another dog? You must if you wish to succeed.

One dog with two heads and a stretchy body, what could possibly go wrong? Collect the bones, and overcome the obstacles in this 3D puzzle adventure.