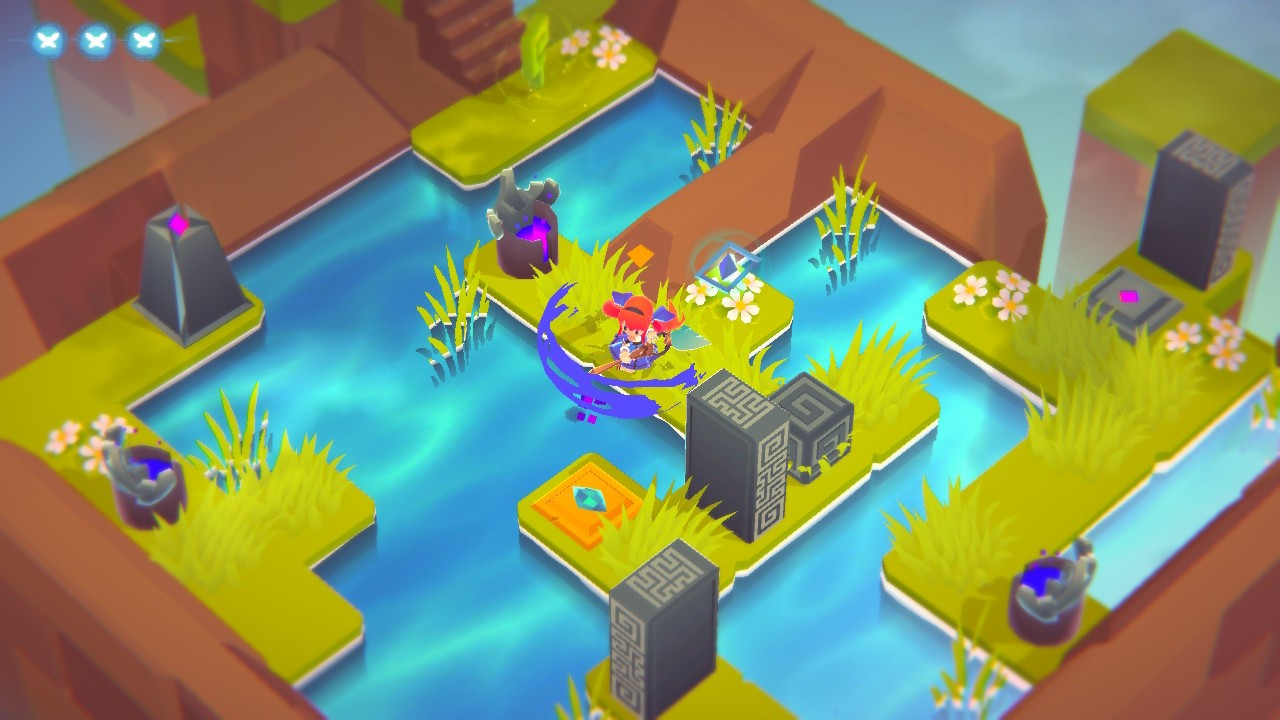 Somewhere in the metaverse there exists a dimension where little pushblock zelda puzzles became the dominant mobile gaming genre instead of swipey physics puzzles like Angry Birds or Cut The Rope. In this dimension there are three tiny, occasionally hard to grab collectables for you to find if you want three stars in each level and not actual stars to collect with falling candies or high scores to obtain. This dimension is chock full of content and even attempts something like a faltering story replete with psychotic penguin cops. And in this dimension the new game QV from Korean developer Izzle is topping the charts in the iPhone’s app store.

As it stands in our universe, QV is a great game to play during an annoying subway commute or in-between bouts of tougher games. The levels are short and at least in normal mode they are never too tricky. The game has you controlling a redheaded multi-dimensional waifu on some kind of mission to do something as you push blocks around, set up portals and doors, and irritate golems who are just trying to take naps. You have a brush that you can use to shoot ink into water and create platforms or smash fairies with. From trailers you might get the incorrect impression that QV is the bite-sized equivalent of an action-adventure game like The Legend of Zelda. It is not. In my few hours with it, I never smacked anything other than the fairies, and as far as I could tell they didn’t even do anything to deserve it. 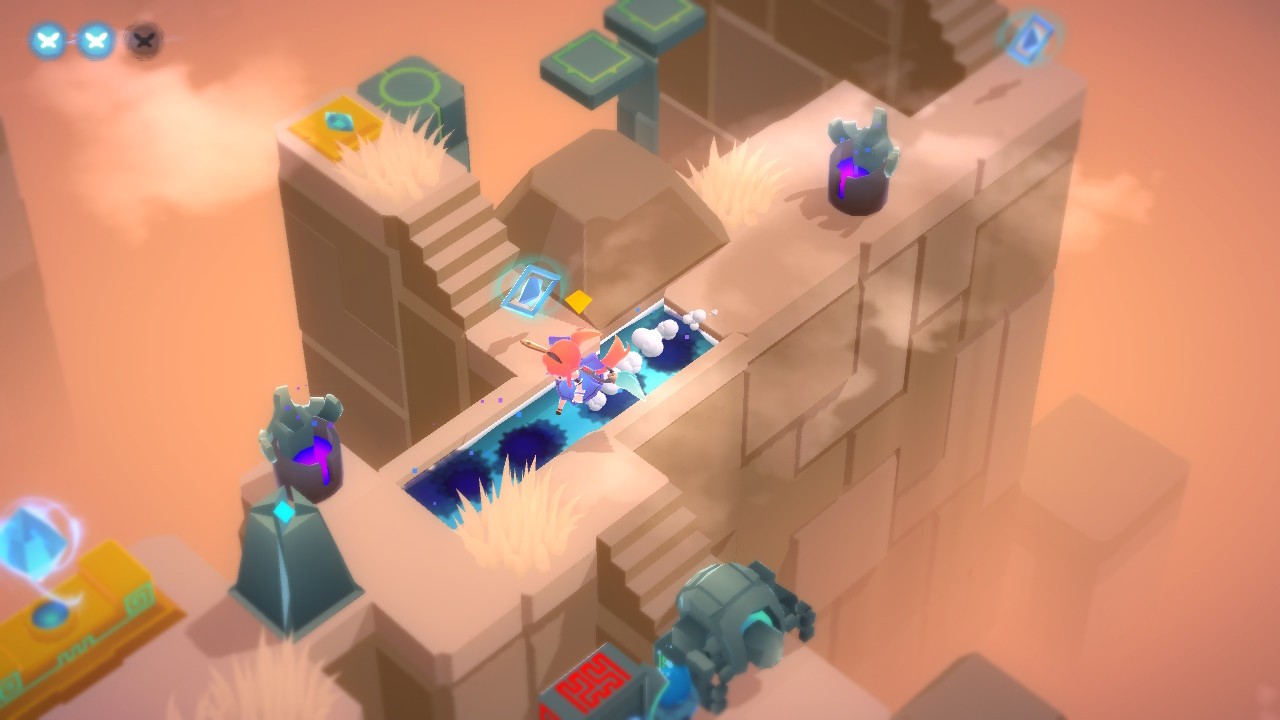 There are enemies and other NPCs, however. Nasty evil punk rock penguins try to catch you and beat you up, but they can’t detect you if they don’t see you, much like one of the stealth portions in a 2D zelda game. Their cousins, the aforementioned psychotic penguin cops, will also try to beat you up, but their movements follow less discernible patterns. None of the penguins pose much of a challenge to you, though. QV is not a game of lightning-quick reflexes or constant dodging, but a game of thoughtfulness. Like other simple puzzle games, QV encourages you to shut off your mind to whatever else is around and push blocks onto the switches. The penguins and golems aren’t there as actual threats to your well-being, so much as they are other obstructions to find ways around.

Somewhere in QV there is a story hidden amongst the penguins and pushblocks but it is inscrutable. You, the redheaded waifu, meet a shy seeming K-Pop penguin named Varon. You push him off of the side of a platform and then run into him again. Eventually you bring him back to your interdimensional hub and he tells you in charming broken English that other penguins (the ones of the punk rock variety) “went crazy ever since some insane force took us to here. [SIC]” Perhaps, like the explorers of HP Lovecraft’s At the Mountains of Madness, they saw something that drove them to hysteria,. 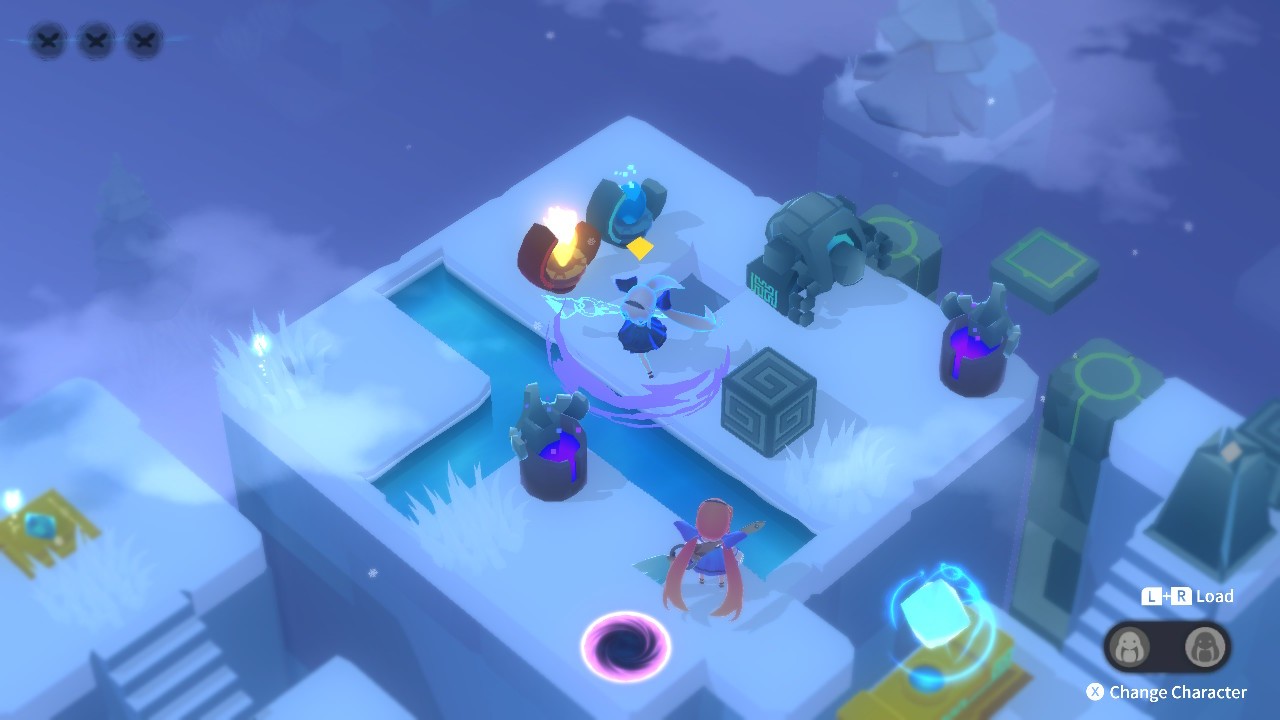 Is QV worth it, though? It depends on what you like. If you want a huge number of simple puzzles to keep you busy during a morning commute, QV is chock full of things to do to ensure that it’s worth the asking price. There are six themed worlds full of puzzles, four levels of difficulty for every single puzzle, and each has three fairies to smack around with your ink brush. There are also numerous achievements to unlock and some of them will give you the ability to change up your hairstyle. On the other hand, if you are looking for a deep story and not a chubby penguin’s surreal wet dream, you certainly aren’t looking for QV. Me? I enjoyed this game. It was a great palette cleanser in-between bouts of getting my ass kicked in Gato Roboto and I will forever be thankful towards it for calming me down and keeping me from throwing my controller at the television.