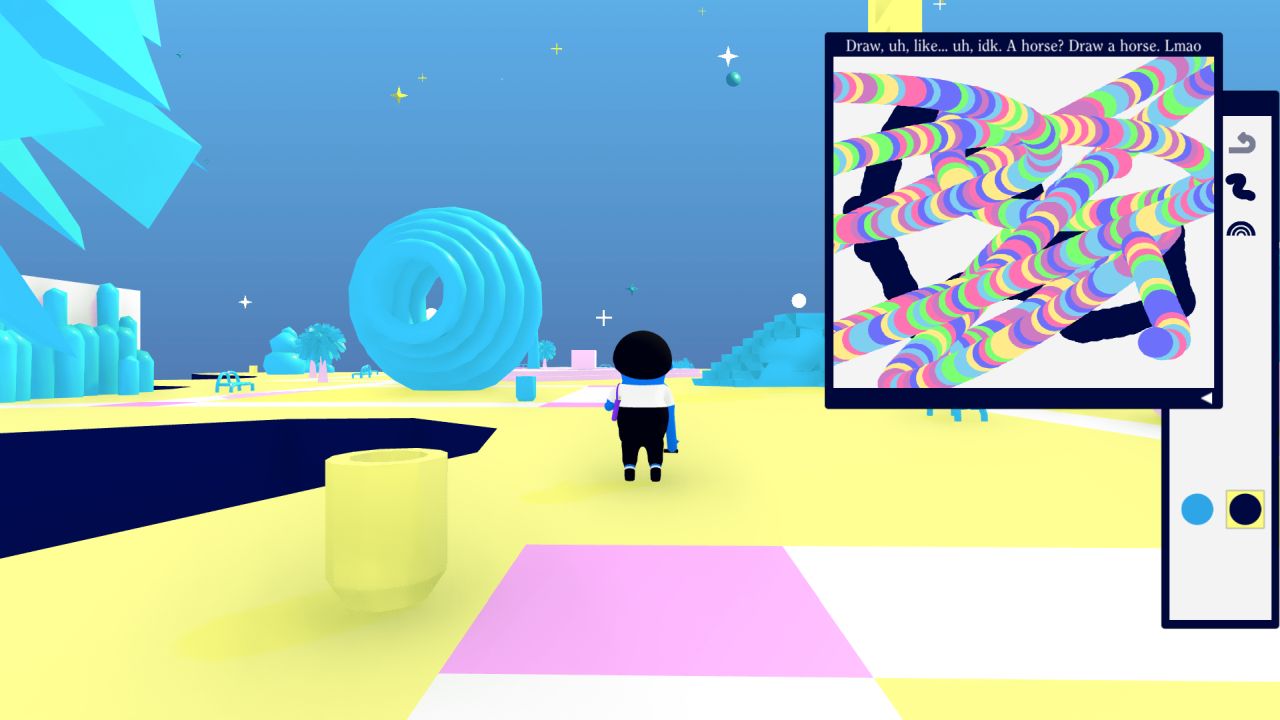 This may surprise no one, but i can’t draw. I can write, and I guess I can play some instruments, but I can’t draw. The images in my head never translate to paper, and the ability to look at something and copy it down, even when something is directly in front of me, is nonexistent. The best I can do is trace and then colour, and I’m reasonably alright at that. I made my peace with my inability to do art a long time ago. Still, I like the concept. I like the idea, and I love that my kids apparently have a talent for it that they cultivated naturally, as it didn’t come from either of their parents. So why in the hell did I decide to enrol in Art Sqool? The answer, as it turns out, is everything I just said.

Art Sqool is the brainchild of Julian Glander, an indie dev who has a dream and a frigging iron bar for a backbone (mad respect for pulling their game from Steam). You star as Froshmin. Who is now a proud student at Art Sqool and will find out what it means to be an artist. Exploring the unique and frankly Dadaist campus, you will be tasked with multiple assignments of what to create, but finding the tools to make those ideas come to life is up to you. Tour through what looks like a massive car wreck between Salvadore Dali and vaporwave aesthetics as you find different colours, brushes and tools to help you create the perfect piece to match what your teacher asks of you. You’ll be graded on your creation, but remember: the most important judge is inside you. But also the teacher. And the critics. And people who’ll actually buy your art. And your parents who are paying for art school. And the historians who’ll pass over your work as failed passion pieces. But also you, so try and keep that in mind.

So what is Art Sqool? That’s a question that I’m still asking myself after playing for several hours and also accomplishing about half of the target “assignments.” As Frosmin, you are given projects with very subjective ideas by the disembodied Dean/Teacher, who looks like a Biblically accurate angel without being so creepy. If you want to, all you need to do is draw. That’s literally it. You drop into the game, you get your new, odd prompt (draw the back of your own head, draw music, listen to the room and draw what you hear, etc.), and go from there. You begin the game with all you technically need, which is a single-pixel style line (think the pencil tool from MS Paint) and the ability to toggle the canvas on and off. Once you finish, you return to the Dean by either entering nearly any building or, my personal favourite approach, throwing yourself over the ledge to what I prayed was death. Instead, I got evaluated on my colour, composition, approach and line work. You then get a letter grade, though you’ll be encouraged to try the assignment again if you write nothing and try to hand that in (which I did, multiple times). You respawn SOMEWHERE on campus and make another go at the next assignment, like drawing water flowing or a still life of a giant fruit somewhere on campus. 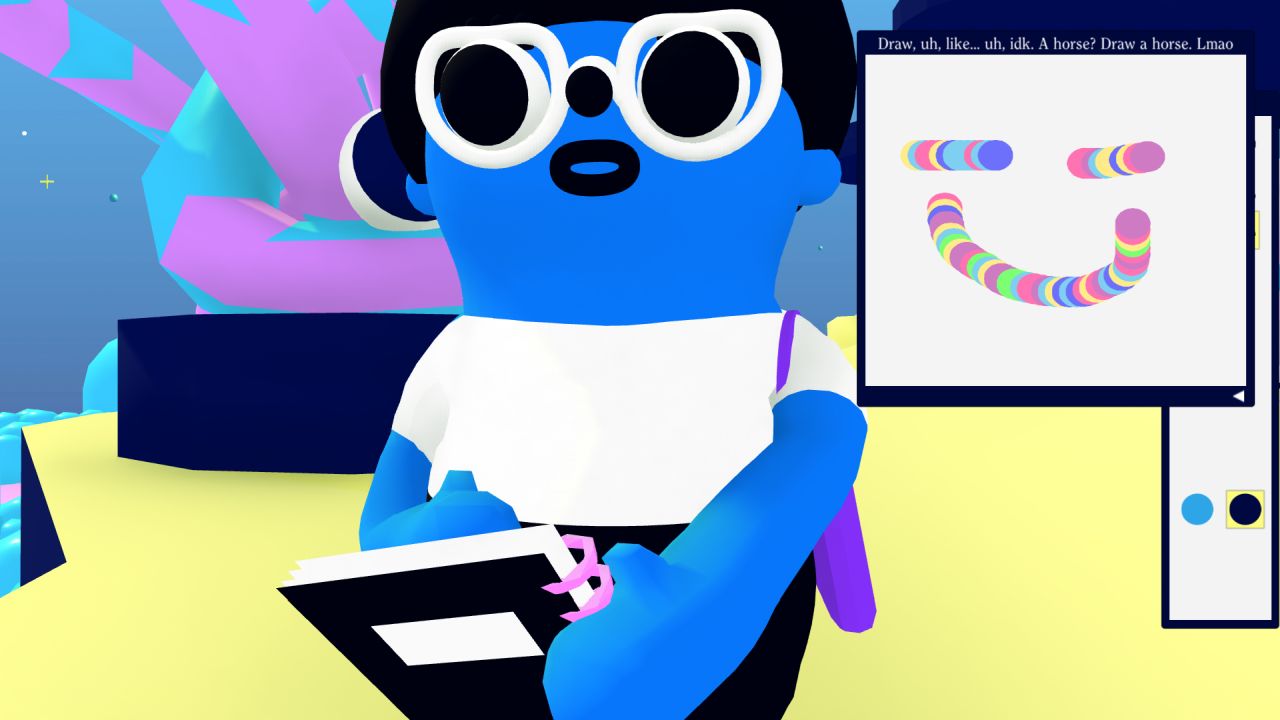 Right away, you should suspect something is odd about Art Sqool, and that’s because everything about Art Sqool is odd. There is an aloof, almost childlike nature to everything that’s happening to the point where it becomes difficult to differentiate what’s important and what isn’t. I feel like I got great grades on projects where I was almost purposely ignoring the prompt and doodling positive nonsense. I put a ton of effort into the project of “draw something with a single line” and I got a B. I did some Etch-A-Sketch level effort to make a total picture without raising my finger once, and I got a B. Strangely, my line work got the lowest grade, followed by colour (because, well, one line) and then approach and composition were strong. What the hell? I’ll be honest, I don’t know if there is an arbitrary nature to the grading or if there’s an actual algorithm to follow, but I never figured it out and it’s not worth agonizing over.

The real joy from Art Sqool comes from actually exploring the Art Sqool. Julian Glander has created a splendiferous world that’s on par with things like Hylics and Moon in terms of inventive, almost absurdist shaping. The campus is split into so many fragmented islands, each filled with round shapes, impossible sculptures and hidden secrets that are both obvious and highly hidden. Exploration will help you find brand new art tools to help you diversify your drawings, like new pens, new colours, a paint bucket tool and a stamp tool that grants wildly different stamps based on the colour you associate with it. You have a lot to see and a lot that I still haven’t totally figured out, but really would like to. I’m the only person on campus as far as I can tell, yet there’s evidence of other artists floating around, like empty theatres, well-crafted statues of odd somethings and signs. Signs in Wingdings and other off-kilter fonts. I’ve screenshotted them all and am looking forward to finding the right combination to translate and discover the meaning of them, because it’s either nothing or it’s something and it’s worth the investigations in all cases.

Playing Art Sqool docked is a visual treat but an absolute nightmare in terms of colouring. You move around with the left joystick and toggle the game between walking mode and painting mode with the left shoulder button. You paint with the right joystick and holding down the right trigger button, releasing when you need to change to a different colour or brush. I hated doing this, full stop. It was so much better to put the game into handheld mode and just colour with my finger, as the touch controls for the paint mode both are more intuitive and are more forgiving. Additionally, if you’ve been holding onto that stylus you used for Mario Maker 2, this is a great opportunity to break that back out and give another go at using a tactile pen with your Switch. Moving around is good in all cases, so no complaints in terms of controlling the Froshmin, though I will include an important observation: the perspective of this game is WILD. 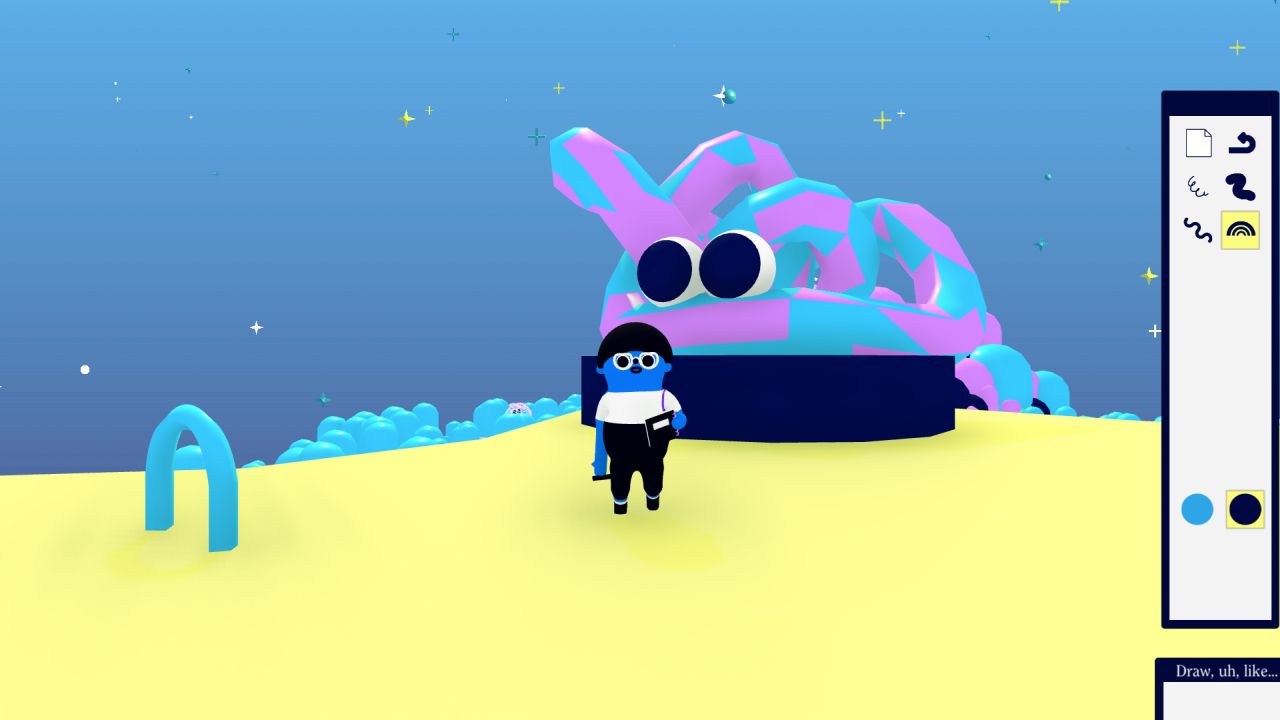 I can’t believe how often I toggled between the different vantage points to help find new things within the world of Art Sqool. There’s a near and slightly far over-the-shoulder 3D mode, and then you can change it to full first-person, and THEN you can zoom way out and have a fixed camera 2.5D approach. It was fascinating to see how much the game changed depending on how you looked at it and the details that appeared when you altered the way you saw the game. The overview makes a flat, large map of Art Sqool, but the different 3D perspectives grant more insight into details and how the depth of everything works together. There are so many things you won’t be able to find unless you realize that nearly everything has a 3D aspect to it, meaning there’s behind, around and under/over to consider with all steps you make. Once, I needed to go from one island to another, so I tried jumping, and I realized it wasn’t going to be far enough. In desperation, I hit jump again and I jumped again. Suddenly my Froshmin was flying through the air, one pithy jump at a time, and the world took on a new shape and tone. Exploration was now fully on the table, and the difference between the 2.5D jumps and the 3D FP jumps were wildly separate. It was one of those moments where maybe the game told me I could do it and I just didn’t pay heed, but it was such a wonderful surprise that I don’t care. I am the artist, Froshmin, and I fly.

Between the beautifully eclectic soundtrack, the aesthetic color palette and graphics and the utterly bizarre, ethereal plotline and purpose, there is so much to love about Art Sqool as long as you go in with the right expectations. Players who really want a serious drawing application or anything that has a coherent narrative can go elsewhere to search for meaning and reason. For players who really enjoy going on the stranger side of games – whether it’s pure art house nonsense or ironic gaming in the name of amusement – then you really can’t go wrong having this piece of potentially subversive art on your Nintendo Switch. It was enjoyable from start to finish, and I love the concept and the execution, even if I still don’t know the how or why of my grading process. If you’re not sure if you want it for your Nintendo Switch, go back and check your itch.io account: anyone who bought the BLM bundle some time ago owns a copy and may even have a better time controlling Froshmin with a keyboard and mouse. For me, though, I’m off to bounce around the clouds and see what inspirations springs up from the hallowed grounds of Art Sqool.

I’m not a student of art, and I don’t think I ever will be, but Art Sqool seems to really capture the insane fever dream of trying to study the subject.