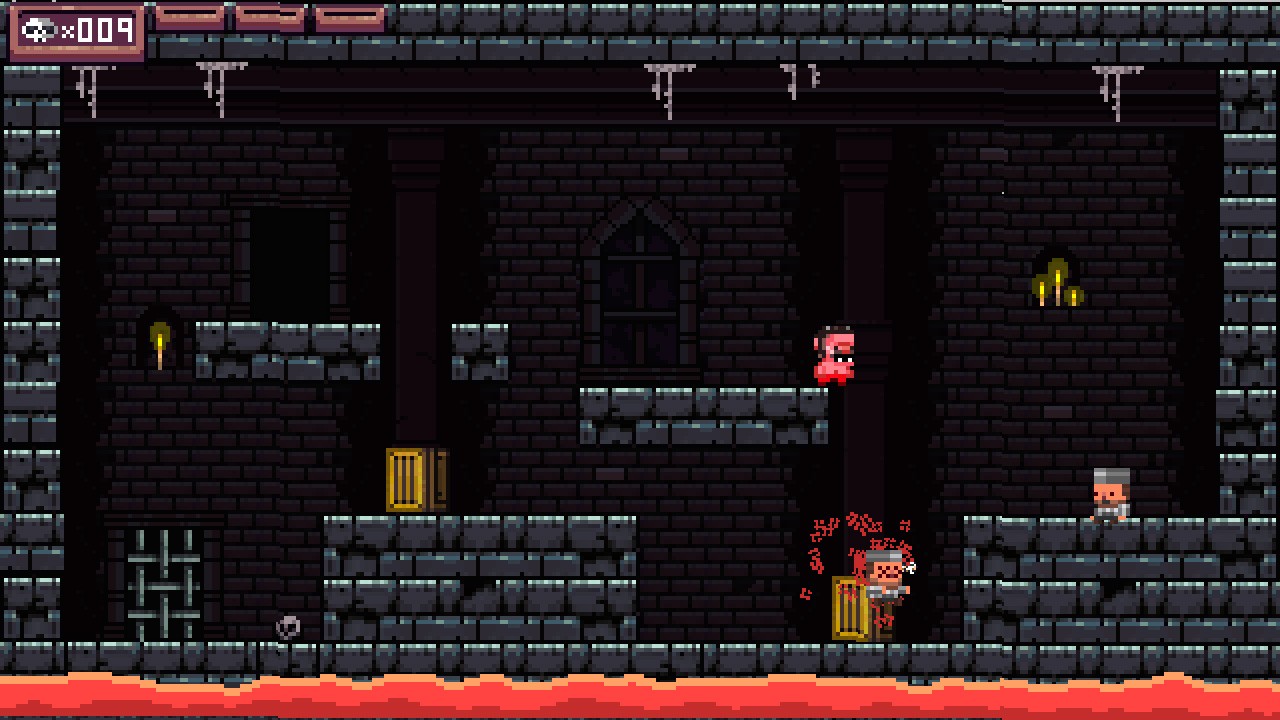 Old school retro gaming has never been so popular as it is now. I reckon it’s enjoyed more now than when it was known as “new school” back in the 80s. Every day of the week indie developers are churning out new titles for us to get our teeth into, and the latest for me to play is More Dark. Developed by Huge Pixel and published by Ratalaika Games this retro puzzle platform game will have you exploring 60 levels across several worlds. You will start off with minimal skills, and simple puzzles to solve, but as you progress, you overcome complex issues, and master new gameplay mechanics.

This dark, haunting platform game encapsulates everything about its retro theme. With; pixelated graphics, simple controls, synthesised music, and hidden items to find. This will be a game that you will pick up to see what it’s all about, and will put it down once you finish it. You control a demon, he oddly looks like a bright red Freddie Mercury, and has received orders from the daughter of the Other World, Evilina. She takes temporary charge of hell, and madness ensures. The prisoners of damnation escape, and this threatens to unbalance the fragile peace of the Devil’s domain. You must cleanse each area and return the prisoners whence they came. You must restore balance and redeem yourself all in one fell swoop.

The aim is to get to the exit gate, by killing all the prisoners, and unlocking the steel bars. You must move the boxes, leap on heads, blow up squares, and jump on slime. By doing all these things, you will open up the locked path, and overcome the many obstacles that you will face. You have no timescale to complete your task, but you find you will still fail repeatedly. If you have not moved a box, and you are stuck in a pit, its game over. Hit a prisoner other than on their head, you guessed it, it’s game over. You have to make a thorough plan and stick to it. If you don’t, then it’s game over. 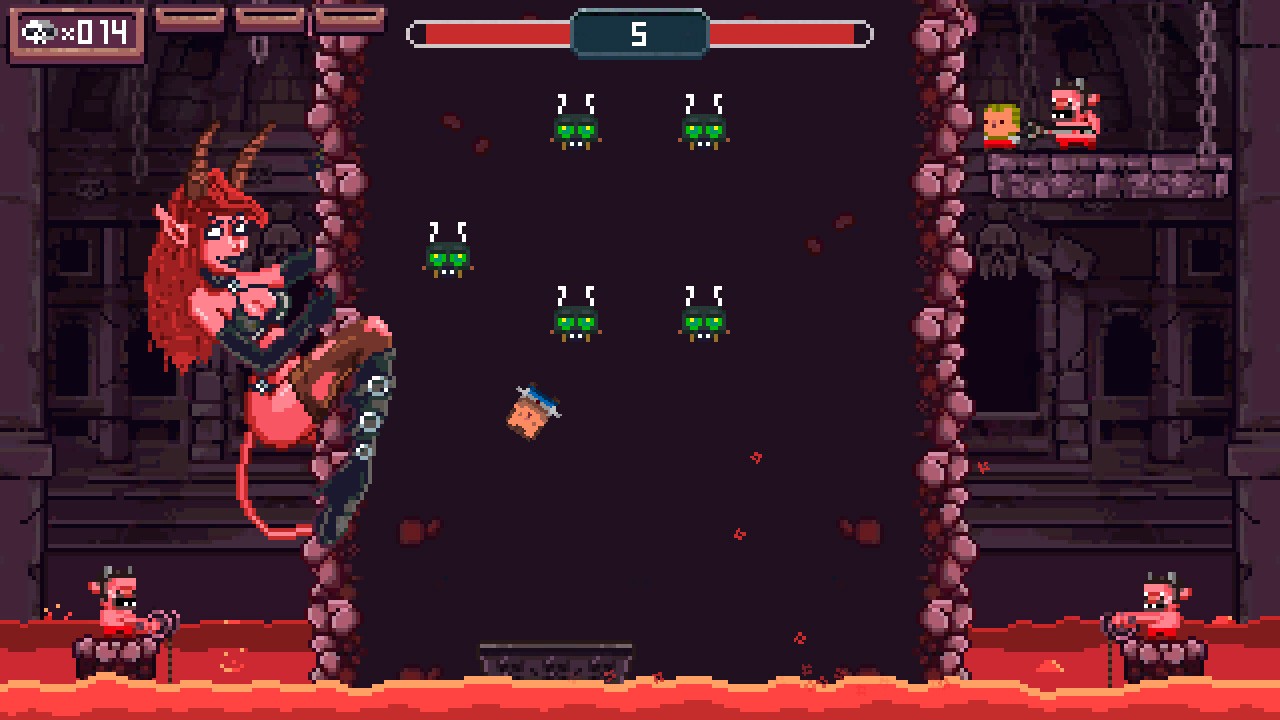 The simplicity of this game makes it such fun to play. New game mechanics are added sporadically, and you are given the chance to master these before more are added. The puzzles aren’t overly complex, but require a small amount of logical thinking to overcome them. For all its positives, I found one massive negative; if you select new game by mistake, all your existing progress will be wiped (heartbreaking). I had nearly finished all 60 levels when it happened, so, just be careful, you don’t want to make the same mistake.

Any game that is predominantly about evil and hell wouldn’t look right if blood reds and earthy tones didn’t make up most of the imagery. This sombre and sinister affair didn’t push the Xbox Series X, and its pixelated models looked rough on a large screen, yet it worked well. The action ran smoothly, and the fixed screen perspective made it easy to plan your approach.

To continue on with the retro theme, Huge Pixel has been inspired by some classic platform titles from the past, the one that springs to mind is Super Mario Bros. The shrill noise of Mario jumping has been replicated as your devil moves and leaps around the environment. A basic synthesised soundtrack plays in the background, and this adds to the sinister nature, which then ties in all the other elements of the gameplay. 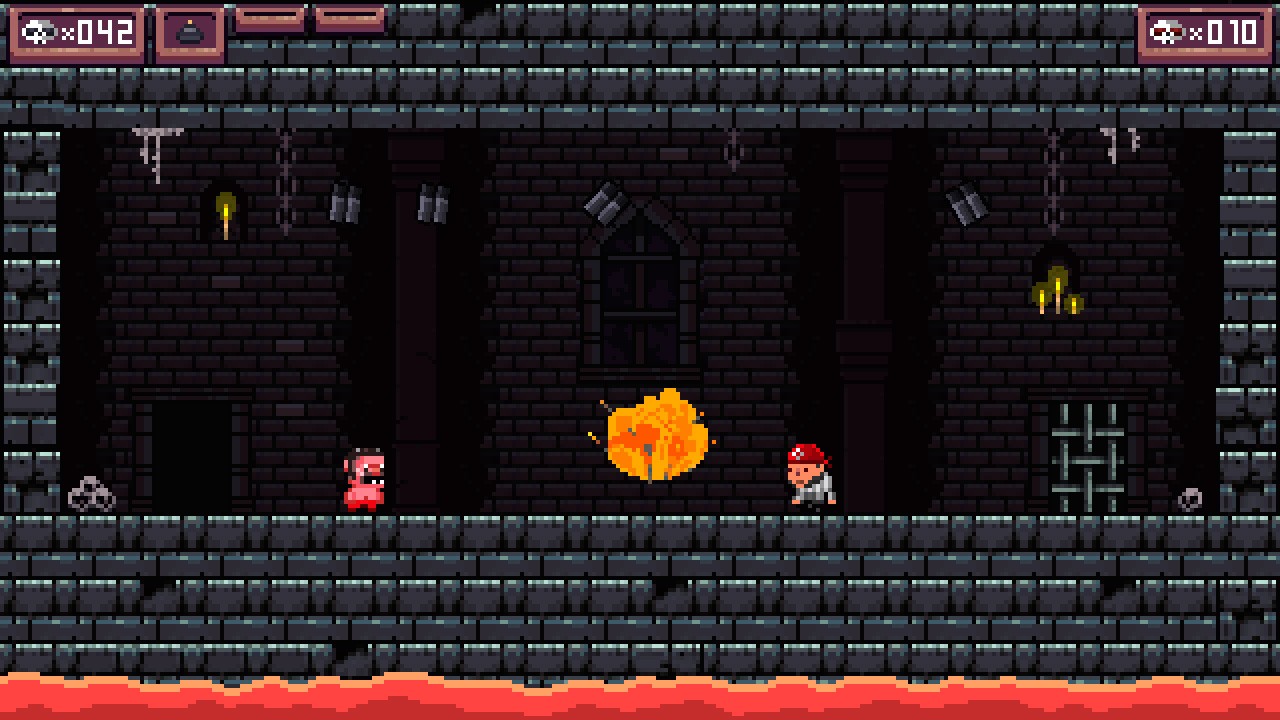 The controls were the biggest issue for me with this title. They weren’t difficult to understand or pick up, nor were they hard to master when new gameplay elements were introduced. My frustrations came as the controls weren’t responsive. You’d jump, and you were never sure if you had done enough to kill a prisoner. I lost my life repeatedly, because of the unresponsive nature. Each time it was met with a sigh, or a grind of the teeth. It wasn’t a game breaker, it just took the polish off for me.

Though More Dark has a lot going for it on its first playthrough, I think once you’ve completed it, there won’t be much to come back for. A simple achievement list is unlocked very early on, and the 60 levels can be blasted through in a matter of hours. It has an inexpensive price tag, so represents good value for money, even if you play it only the one time.

I had fun playing through this simple platform puzzle game. It was great to fill a gap between other major titles and is perfect for the casual gamer. It’s an ideal game to add to your collection if you want a simple 1000 Gamerscore, or platinum trophy. Do I recommend it? Yes, just don’t expect a massive in depth experience. Can you return all the prisoners of damnation to restore order? Of course you can, after all, you don’t want to let down the daughter of the devil!

A retro platform puzzle game that is easy to pick up, and simple to master. Can you restore order to hell?