Home
/
PC
PC Reviews
Shiren The Wanderer: The Tower of Fortune and the Dice of Fate Review
Share Review 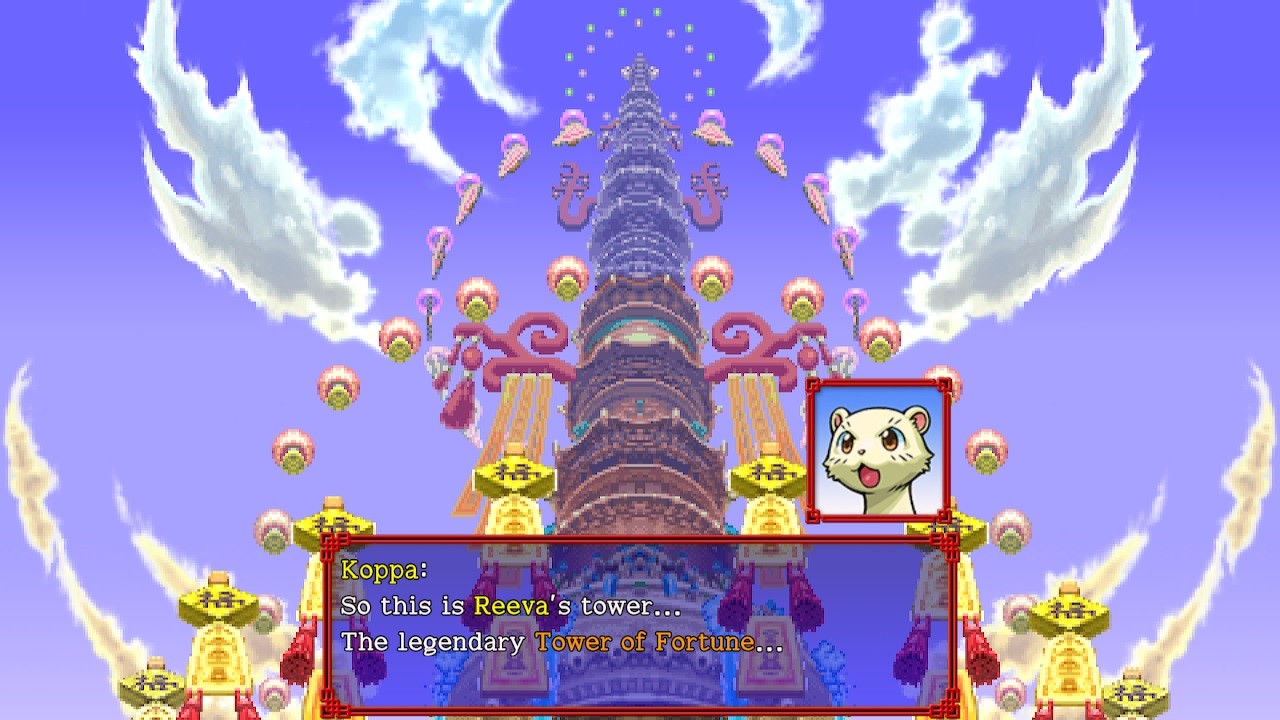 Honestly, when I found out that Shiren the Wanderer was coming to the Nintendo Switch, I was flummoxed that there wasn’t a bigger celebration our outcry of adoration. After all, in my mind, Shiren was one of the biggest and best titles on the Nintendo DS. A mystery dungeon explorer that was full of unique monsters, fun mechanics and seemingly endless replay options, I couldn’t figure out why I was the only person excited in my circle of acquaintances. It was only after I did some research and digging that I found out that, by all accounts, Shiren is a niche title: it didn’t sell particularly well, and even most game critics responded to the gaming series with modest acclaim but nothing groundbreaking. Then I realized: Shiren, by his very nature, is a loner character. When it comes to enjoyment, even though there are multiplayer-variant options (which we’ll see shortly), it stands to reason that most people wouldn’t have touched the series. Hell, the DS version was 2010, and this game, which is an updated port of a Vita game, was a Vita game. I love the fact that Spike Chunsoft is making sure some of the more exciting Vita titles are coming to the Switch to help out Nintendo fans who slept on the handheld giant, so maybe this bit of exposure will help bring a deeply rich title to more fans and, with a little luck, pave a new future for Shiren.

Shiren The Wanderer: The Tower of Fortune and the Dice of Fate (crap, that’s a long name) is the latest instalment of the adventures of Shiren, a ronin who goes wherever destiny guides him and performs actions and heroism from there. In this adventure, Shiren is still accompanied by Koppa, a stoat who can talk, and they happen into a village where nothing is going great for one particular girl named Oyu. In a reminder that the Gods are jerks, this young woman has been selfless, kind, inspiring, nurturing, and, as such, is struck down with a deadly disease. Oyu’s friend. Jirokichi (who may feel more than a friend) doesn’t want her to die, and pleads for help to find a way to change her Fate. As luck would have it, there’s a nearby set of towers known as The Tower of Fortune (the name is singular but there are three of them), where the fabled Dice of Fate reside. One for each of the past, present and future, it’s rumoured that bringing them together will give you the power to potentially change your own fate or someone else’s. Shiren, having not much else to do, (and not wanting Jirokichi to die alone in a tower) decides this is a solid way to spend an afternoon and agrees to head in to fight through multiple floors of monsters, traps and hazards in order to chance an opportunity to save this girl’s life. It’s a very classic story, evoking the sort of mythology you may have heard about ancient heroes, so it works very well for the setup to what is, ultimately, a pretty short main story.

As a mystery dungeon title, players coming to experience Shiren the Wanderer should know some basic ideas. You move on a grid system except for when in town: you have more freedom there, but it’s still going to be sprite-based environments that direct your life. You will encounter enemies that you can sometimes attack from a distance by throwing things and then attack up close with melee weapons. There are traps hidden throughout each floor that are procedurally generated (much like the floor layout) as well as a bevy of items, both equipment and arbitrary. You lose HP by getting hit or activating some traps, and you regain HP by walking around. Your hunger is important, as your stomach empties with each step, and eating stuff to stave off starvation (which then rapidly depletes your HP if you hit zero fullness) is essential. Whatever you buy in town will be better than most of what you find in the Tower, but there’s always a chance to find something really banging and save money at the same time. If you were expecting dramatic action in terms of complex combat with split-second decision making, you are in the wrong realm. 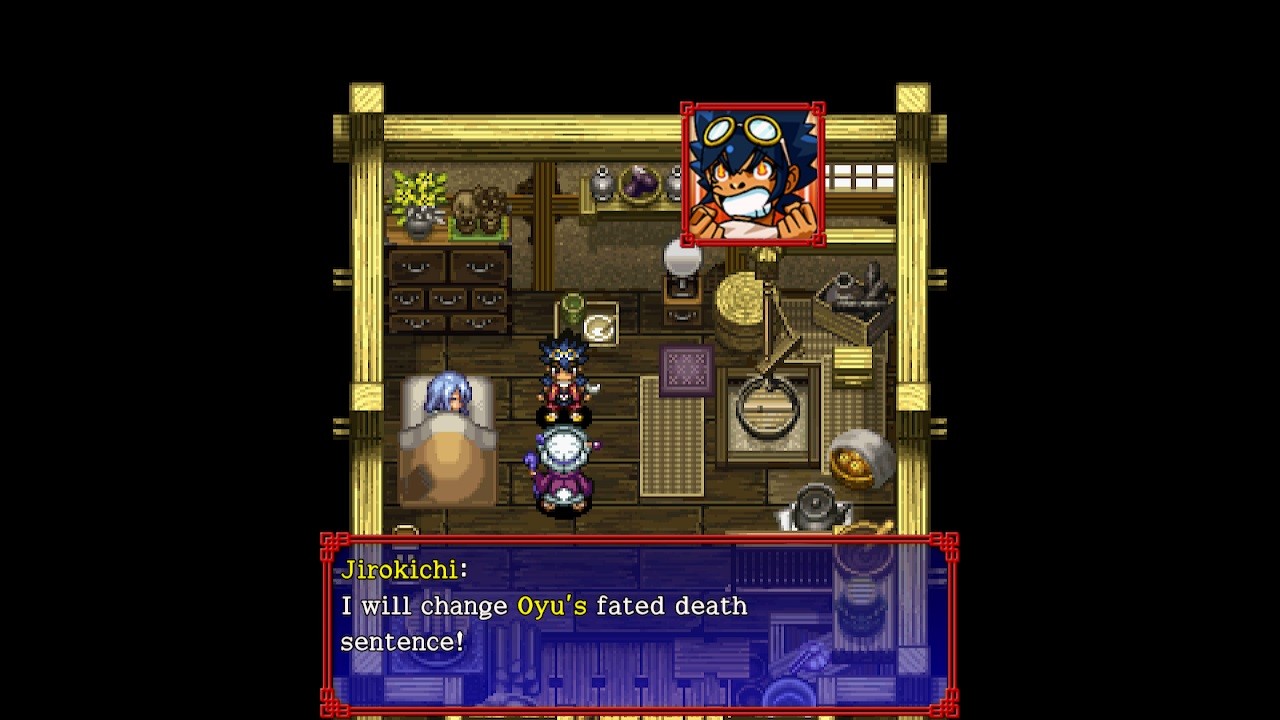 Additionally, if you were hoping for some super sharp and photorealistic graphics, this is also the wrong store to be visiting. Shiren the Wanderer openly acknowledges its old school roots from the SNES era (the first game was actually a Dragon Quest spinoff) and, while the art for the portraits and the level design is quite good, they aren’t anywhere near the level of detail that we saw in, say, Pokemon Rescue Team or the incredibly gorgeous Crown Trick. Instead, we see a game that’s very focused on boiling things down to the essentials and then fluffing it out from there. It’s like the person who practices one punch a hundred times: it might not look like a lot, but there’s an elegance behind the art that also leaves it as one of the most successful executions of the genre possible. Plus, hey, I grew up with the SNES, so I certainly enjoy seeing a more amped version of a 16-bit inspiration. The graphics do play well with the Japanese yokai inspired beasts, so it all works out perfectly.

Shiren the Wanderer takes the mystery dungeon formula and sings it to a T throughout. You constantly need to be re-evaluating the items that you carry with you, as your limited inventory will have you making tough calls about equipment, food and buff scrolls/potions all the time. You will be concerned about when to use staves and when to discard them. Teleporting enemies might solve an immediate problem when surrounded, but they will be waiting for you at the exit to settle the score. Giving yourself buffs to up your hunger meter or temporarily making you Hardy might be important for this floor, but what about the next one? Also, this amulet you have resists sleep curses (perfect for certain traps and enemies), yet you may need another ready to swap if you believe there’s a lot of poison enemies for the next floor. There’s a lot of strategizing that goes into the game, and you need to do it all on the fly without a lot of context because, hey, procedural generation means not always being able to plan ahead for what you need to do. Your best bet is to always have two large onigiri (for fullness), a decent sword and shield (because, duh) and one herb that lets you breathe fire like a dragon, because sometimes a stubborn enemy won’t get the hint until they’re engulfed in magic flame.

The only thing you really can bet on is always having enough cash to hire an NPC fellow wanderer. Having someone else in your party when deep diving is the best thing ever with zero drawbacks. The NPCs will sometimes have great ranged attacks (Tao’s boomerang is really useful), they draw enemy fire, and they gain levels as well as you in the midst of the dungeon crawling. It’s super easy to resurrect an NPC if they die, and their ability to absorb hits while you do your own action unmolested is positively essential. If you never hire Tao, you’re a fool and you’re saving the copious amounts of cash that you get from each run for nothing. Players can easily go through several levels of the first tower to get enough coin to hire a panda suited mercenary to be a meat shield and keep you entertained during the dive. 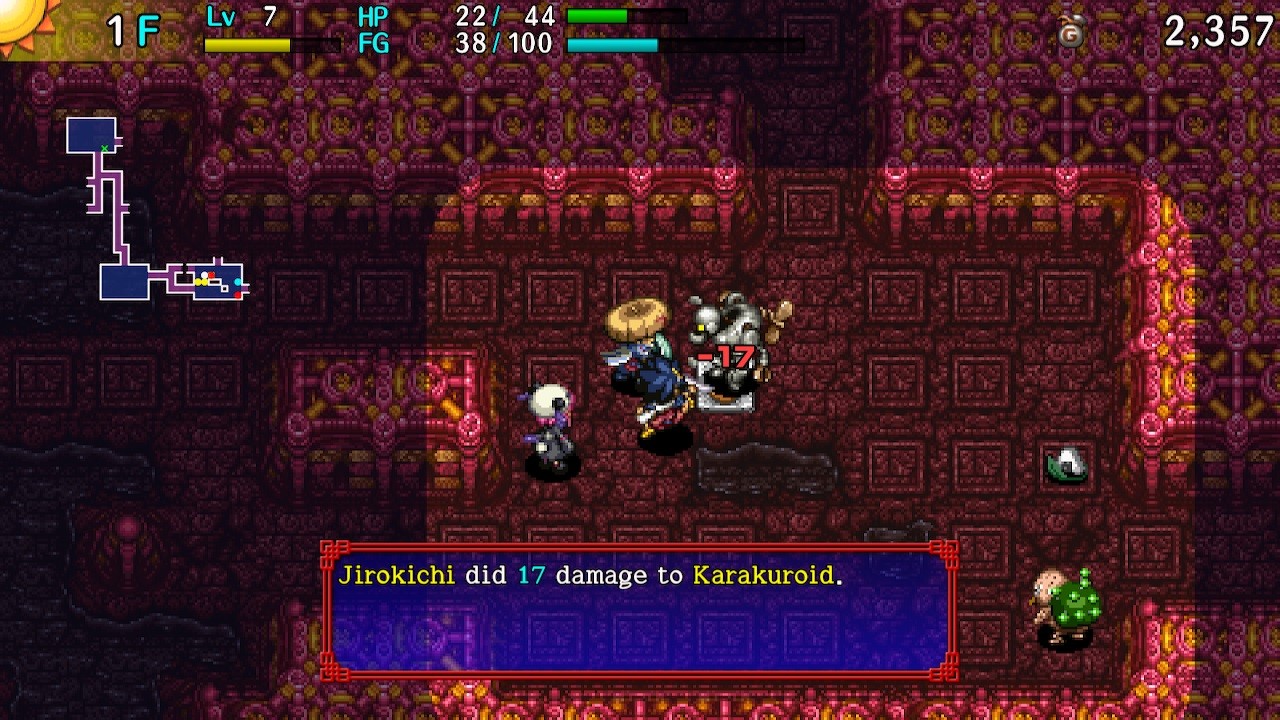 Players who enjoy a mystery dungeon experience are in for a treat with Shiren The Wanderer: The Tower of Fortune and the Dice of Fate. The first two towers can be knocked out fairly quickly, whereas the third tower is a more difficult and longer undertaking that still shouldn’t be too much. After you collect the titular Dice of Fate and move the story along, Shiren begins to be able to access the real joy of mystery dungeon games: requests. Being able to get side quests from NPCs for experience, bragging rights and loot are the most important things in life. You can go rescue other, actual mystery dungeon crawlers who’ve died somewhere in the towers (or out in the field before the towers, if you’re terribly unlucky) and get rewarded for that, as well. Like all great mystery dungeon games, the fun isn’t over just because the main story is accomplished. You can keep levelling, keep finding better and better loot, test to see how high (or low) you can go in the journey and just have the most OP Shiren by the time you’re finally ready to put down the game. If you’re really feeling brave or stupid, see how far you can go in a tower without fighting anyone/thing and not getting EXP. It’s a building thrill that you know will end with you getting one-hit KO’ed by some massive, steam-powered beast on floor 15 or so. Just make sure to deposit all your goods and coins first so you don’t have to send out the most humiliating rescue request ever.

Shiren The Wanderer: The Tower of Fortune and the Dice of Fate is a fantastic mystery dungeon crawler and one of the few that really evokes my feelings of old school gaming addiction and success. Vita fans who missed this game will enjoy the additional dungeon areas that’ve been crafted especially for the Switch release, and newcomers will find something a bit more relatable and engaging than the Pokemon mystery dungeon that was released last summer. In any case, if you’re ready for a truly long-form investment in dungeon exploration, then grab your rice paddy hat and best sword that you don’t mind throwing away: it’s time to wander.

Shiren The Wanderer: The Tower of Fortune and the Dice of Fate Review

Battle monsters, collect loot and throw rocks at dragons in this updated version of the classic mystery dungeon exploration game.