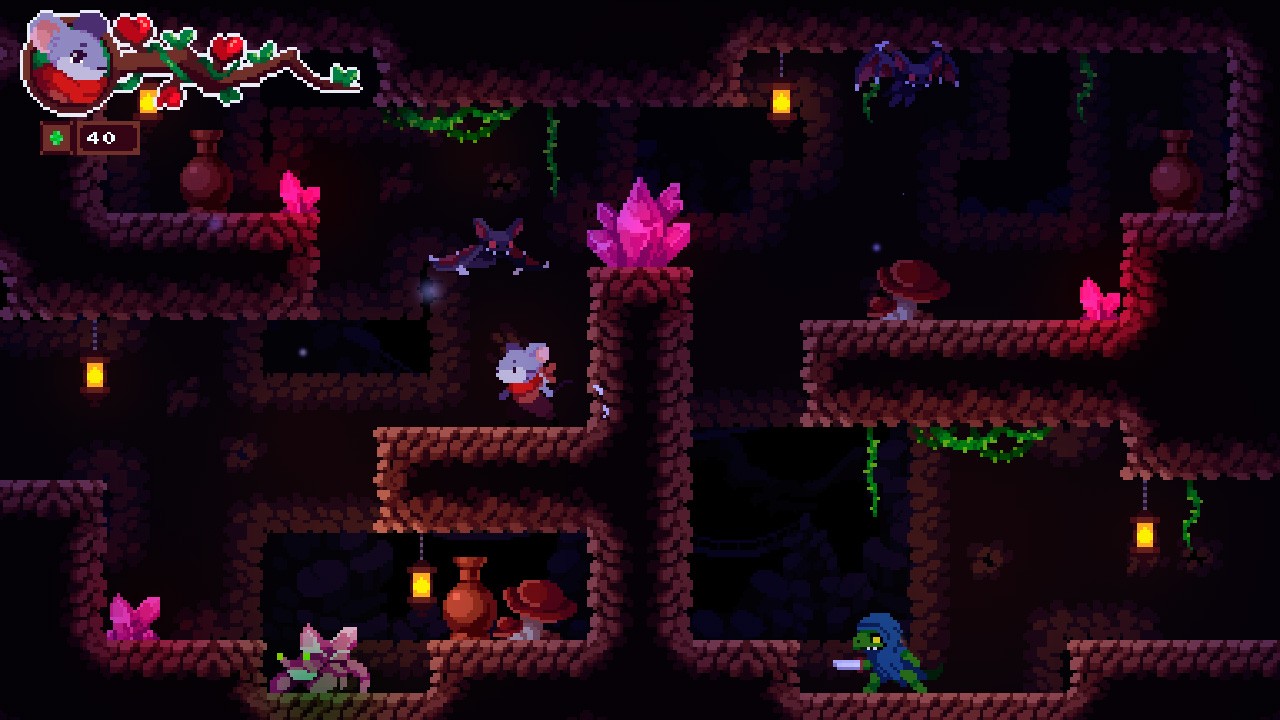 Micetopia is a fairly cute, but simple platformer developed by Ninja Rabbit Studios and ported to the PS4 by Ratalaika Games. Having some minor metroidvania elements and combat that is a bit lacking, the game provides just enough entertainment to make it worth the asking price.

The premise of the game is pretty simple, you play as the aspiring hero mouse Rich, who has to rescue his fellow villagers after they are kidnapped by infected wildlife. It’s simple, but the game does have a couple of weird writing decisions.

For one thing, the game keeps telling the player you’ll find out the source of what’s making the animals going berserk, but you reach the end and it’s never explained. This wouldn’t be so bad, but since pretty much the bulk of what little dialogue in the game is a character telling you “we’re looking into it,” it feels like the writer either forgot or never decided what it would be.

The stories pacing also doesn’t match up with the actual gameplay pacing. The goal seems to be to rescue all your fellow villagers, but you complete that goal and are pretty much just told to go explore until you beat the last boss, who you seem to find by coincidence. The game also ends on a sequel hook, something that’s just a personal pet peeve. 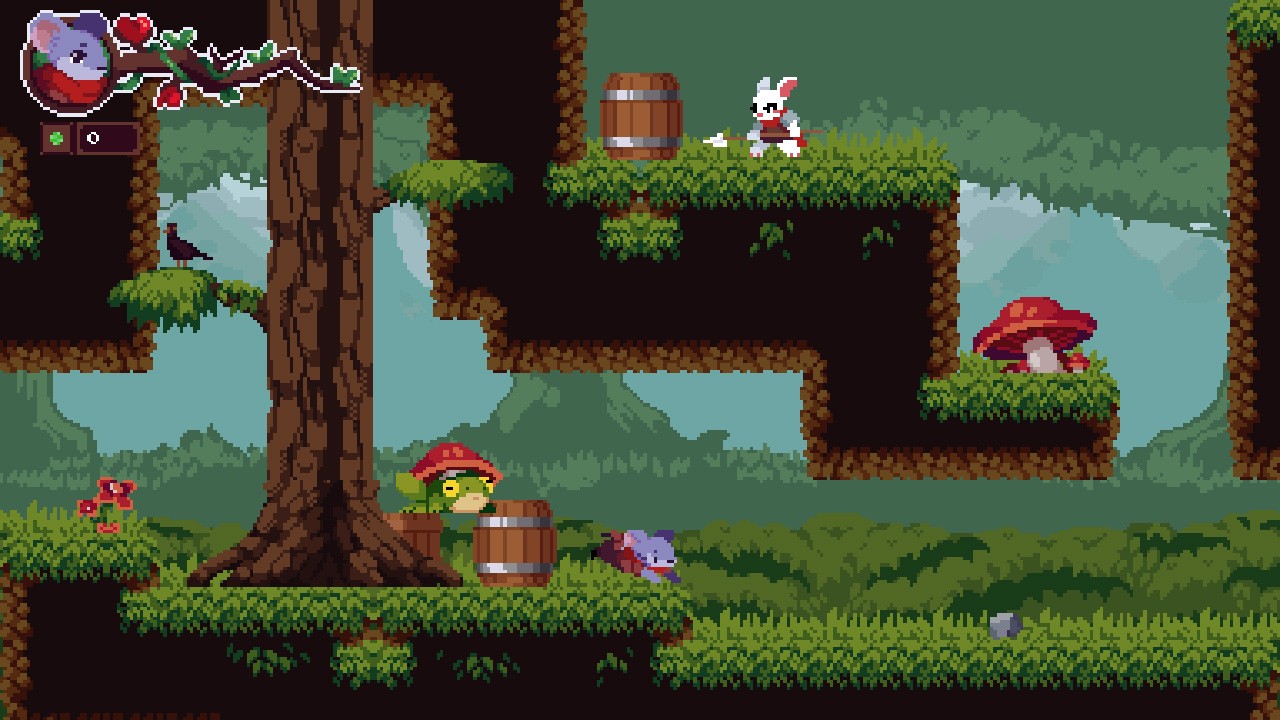 The bulk of Micetopia sees the player exploring either the forest or the caves to find villagers, unlocking new abilities with each one. The platforming itself is pretty solid, and when you get abilities like the double jump and roll it does make it more fun to move around.

Their game combat is pretty basic. You have one attack, slashing with your sword, and later unlock a bow and arrow that you’ll almost always have ammo for. For the most part it works fine, but before you’re a third of the way through the game you’ll have gone through all your combat options.

The upgrades are also not super useful outside of specific situations. The double jump is pretty universally useful, but the other abilities don’t have a lot of practical applications. Even the dodge roll you get can only be really used in non-enclosed spaces, which outside of boss rooms there aren’t a lot of.

Probably the biggest downside to the game is that there isn’t really a lot to do in it. There are only two maps in the game, with the first being where you unlock all but one ability, with the last one only applying to the hub area. The only upgrade element there is in the game is upgrading your sword’s damage, and even then you can only do it twice.

Enemy variety is also pretty lacking. Not counting bosses, there’s a total of five enemies you actually see in the game. Of these, two of them serve essentially the same function as those found in the first part of the game.

The boss fights themselves are a bit better, with a nice variety for what there is. Unlock regular combat, which comes down to mashing the attack button, the boss fights have you at least try to learn the boss’s attack patterns. 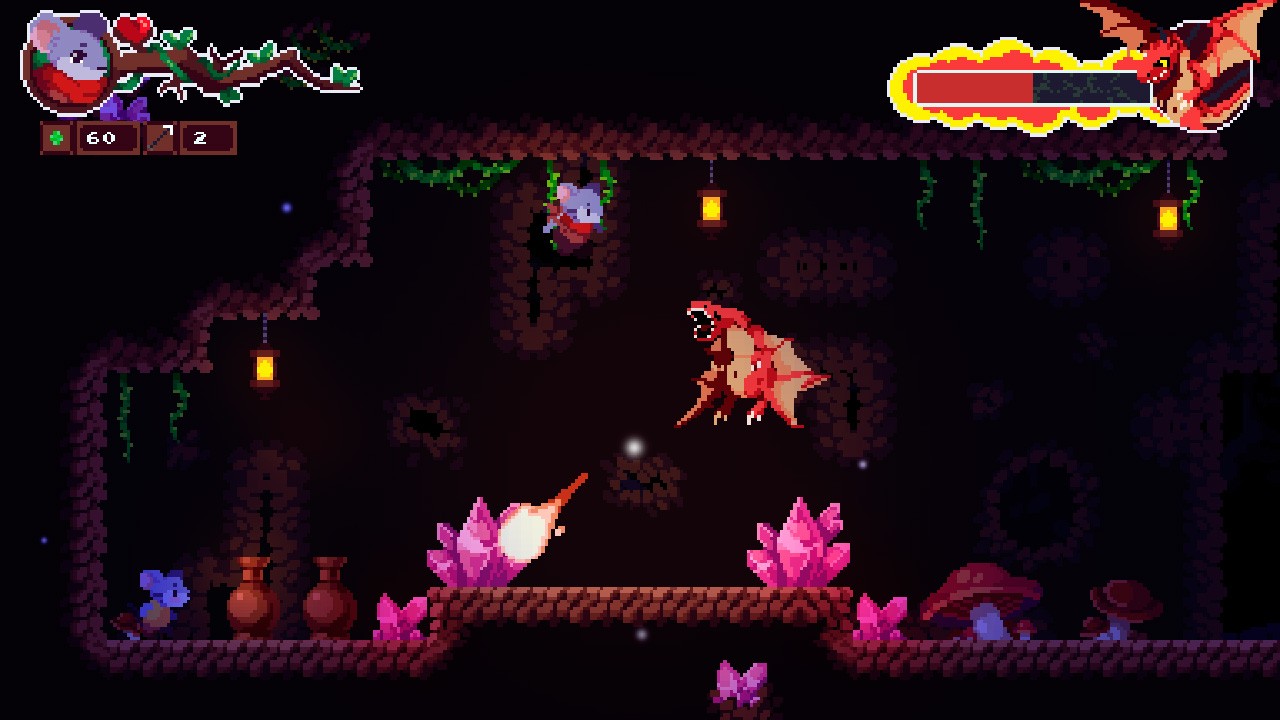 The game is strongest when it comes to its presentation. While there aren’t a massive amount of assets in the game, what is there is done in a charming pixel style with pretty strong animation quality.

The game’s music is also a highlight, making use of some great chiptune tracks. Particular praise goes to the boss fight theme.

The biggest issue with the presentation is similar to the big issue with the gameplay, being that there isn’t much of it. Even the music, which is one of the game’s strongest points, can get old over time as you have to listen to the same tracks on loop for most of your playtime.

There’s a lot of promise in Micetopia, but compared to similar Metroidvania platformers like Hollow Knight or Blasphemous, it lacks in overall content and polish. If you’re a fan of the art and music style, it may be worth the 5$, but otherwise there’s not much of a reason to add it to your library.

Micetopia has a great presentation and a good base as a platformer, but some issues with combat and a fairly small amount of content means it doesn’t quite stack up to contemporaries. Pick up if you’re a fan of the art and music, but otherwise not much to see here.