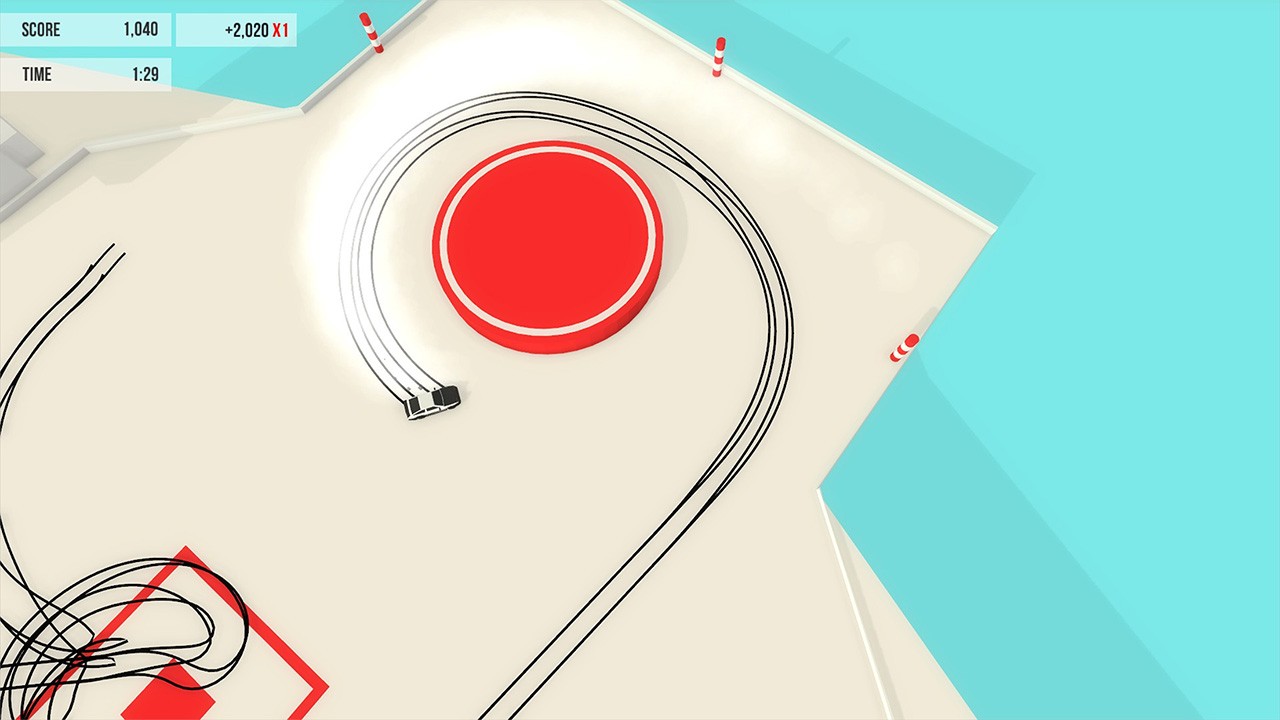 Drifting games, like rally titles, are perhaps a bit of a niche. They are often reserved to the Need for Speed franchise or car bling, burning out tyres and incomprehensible physics. Drifting games, unlike rally titles, perhaps don’t get enough attention for that reason, reserving any game to a supposedly select audience. However, all it needs is some good mechanics, satisfying set pieces and the drift game could earn some kudos in the driving genre. It’s not all about licensed vehicles, customisations and 30 different ways to view your wheels, maybe, just maybe, there’s a game that can simplify it all and be a bit more… Zen? Absolute Drift: Zen Edition would best fit that mould, but is it Drift King or Drifting Away? Sorry.. ran out of juice on that one.

Absolute Drift: Zen Edition is a classy looking game, and it’s a bit of a contradiction in many ways too. For starters, it goes for the minimalist approach, and that can be a sophisticated decision if done correctly, and in this case for the Switch, it borders on edgy. The colour palette has a minimalist approach too, and by default, your vehicle is white, as is the rest of the tracks with points of interest highlight with a splash of colour here and there. The first contradiction of many then is this does feel like style over substance.

When I first started to play this on the big TV, I kept crashing or clipping the walls (clipping is good in drifting, as long as you don’t connect with anything). The reason, not an excuse, was not being able to see any objects as everything was white. In the early challenges, you have to maintain a drift in a circle, picking up modifiers as you go along. Unfortunately, the only guideline was the tracks I left behind as I couldn’t see anywhere else. Swapping play over to my monitor, later on, I realised the gamma was off and could now see, only subtle, the edges of 3D objects. It looks nice and all, but a bit pointless in a driving game if you can’t see obstacles. 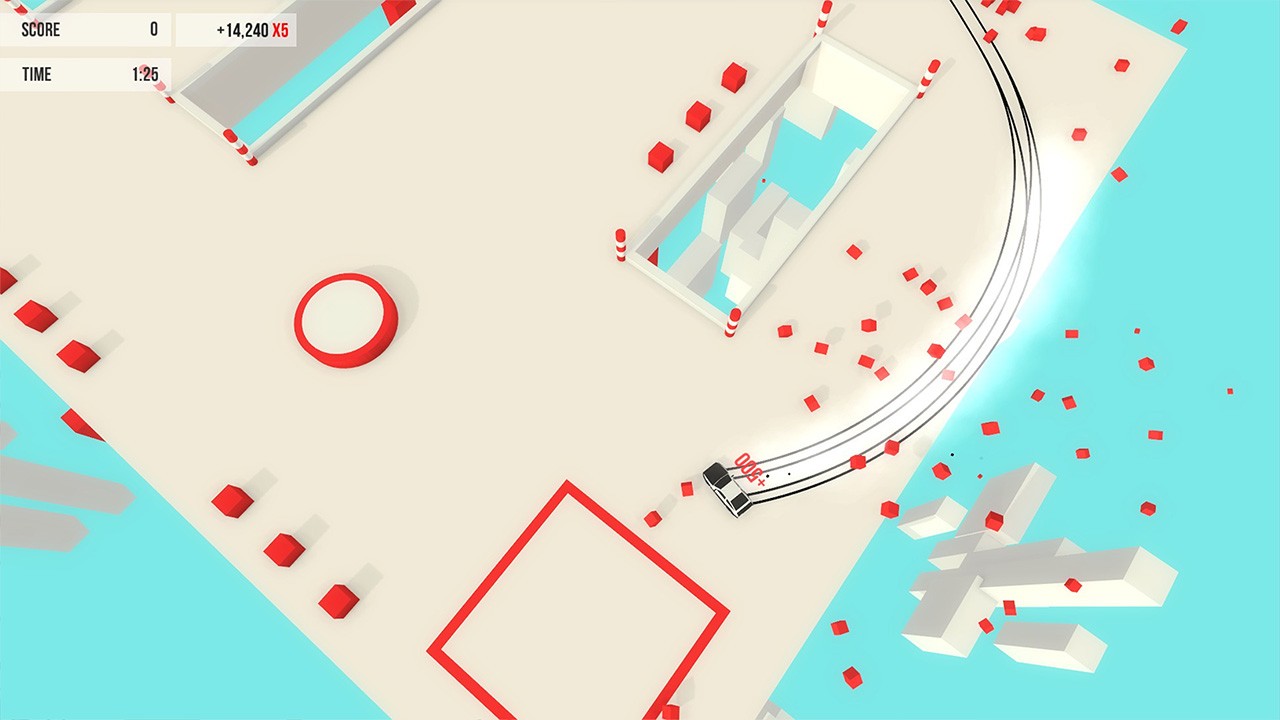 The handling of the cars was a pig too. Put your foot down to get enough speed to slide into a corner… whack: wall. Do the same, but apply the handbrake and it’s the same again, only you slide further, flirting with oversteer then under steer. It seems all hopeless, but with the Zen-like approach to the game (another contradiction – Absolute Drift: Zen Edition can be infuriating), you get little snippets of calm, and one little mantra repeats that it’s not about the speed. Applying this as there was nothing else to do was the solution – it was right in my face, and this unnamed guru had enlightened me. Tickling the throttle here and there as if learning to drive in a car park paid off, and while the scoring with modifiers mechanic was still ruddy hard, my driving improved. Drastically.

First-person is my preference for driving games, with the odd exception for games like GTA, but I admit that sometimes these games have too many viewpoints that you end up changing them so much that you can’t settle. With Absolute Drift: Zen Edition, there are no alternative angles other than the top-down isometric perspective. Like learning the drifting mechanic, it takes time to get used to, and there aren’t any shortcuts along the path of mastery.

There’s plenty of ways to master drifting as well with several challenges and mini-worlds to try out your skills. After completing the tutorial, you’re left to do your own thing in a sort of sandbox experience of setpieces like Ken Block’s Gymkhana – including the first area in an airport – like that Top Gear episode, if you’re into your cars. Slide between objects, jump over aeroplanes – there aren’t that many challenges, but there are a handful that are tough, and you need to finish them to unlock the next area. 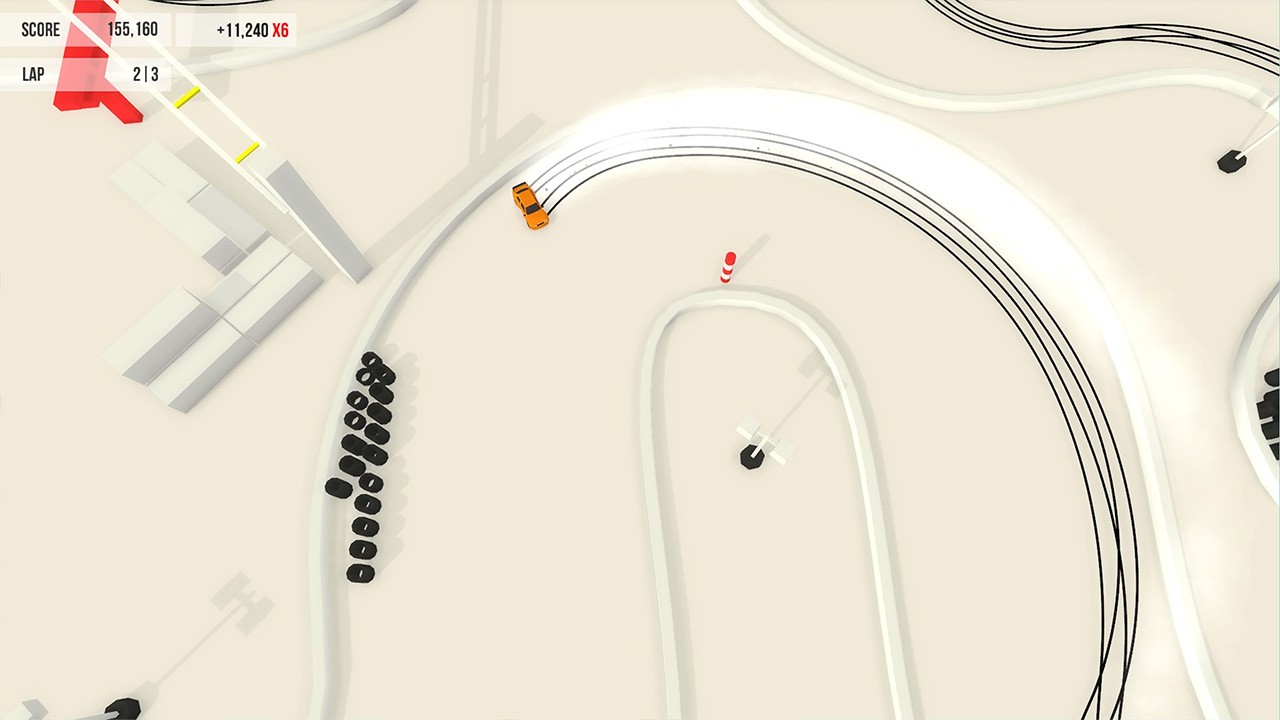 Absolute Drift: Zen Edition is a lovely looking game and is somewhat elegant in its stripped-down aesthetic. It’s not without its problems as mentioned about the merging of objects if you have your settings too bright, but the fundamental issue is the handling of the cars. Going back to the beginning, drifting isn’t for everyone, but this game doesn’t cater for the bling folk, instead, the minimalists, tricksters and those with a great deal of patience to stick with it.

Once you do get it, driving your car along perfect invisible lines as if it were one of those test-drive videos for a new car is very satisfying. Very satisfying indeed. But, like Zen, it’s a long, long path to get there. See it to the end, and it will pay off, but if you want a pick-up and play arcade title, despite its appearance and simplistic controls, Absolute Drift: Zen Edition is a bit deceiving and a lot harder than it looks.

Like the Zen lifestyle, it exhibits, Absolute Drift: Zen Edition is a contradiction in many respects; simple on the one hand, complex to master on the other. But, you get what you put in, and if you learn to master the drift (or are just naturally good at drift-based games), it’s really enjoyable.