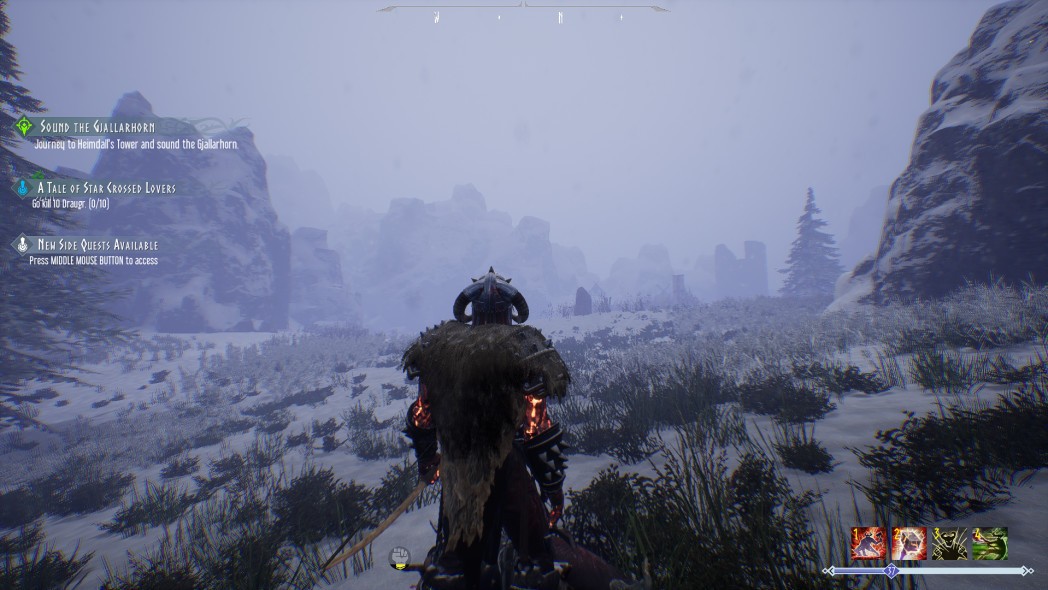 Usually, I’m the more modern type, however, I was always drawn to the history genre, so Rune II’s release happened to be just at the right time for me. I always liked RPGs as it’s interesting to slip into another person’s role and manage their equipment to start an engaging journey. After all, this is the perfect way to escape reality and all its inconvenience, right? Anyway, I was excited to start my journey with Rune II as well, although I never played a game in the series before. Thus, I drove in without any real prior knowledge. Unfortunately, after actually giving it a try, I have to say that the whole game is a huge letdown and utterly disappointed me.

Initially, Rune II is a project that nearly got dropped by the developers until Studio 369 decided to pick it up. Although I didn’t play the first game before, it’s to be expected that this game might differ a lot from the predecessor. However, once in a while, something refreshing is nice as well and, after all, no one wants the same game over and over again. Usually, I would say that I’m glad the game got released regardless, but I feel quite mixed with Rune II, and let me tell you why…

Let’s start with my first impression of the game. I should mention that the loading times are very tedious and I even got impatient while waiting. In addition to that, the intro is not skippable when launching the game so I had to watch that video each time I booted it up which ended up annoying me more than anticipated. Anyway, let’s put all those things aside for now. Rune II threw me right into the happenings and I didn’t really know what was going on. On the bright side, the objective is clear and it’s even displayed on the screen how many meters the player has to advance to reach the right destination. In addition to that, there is a map available as well, although I hardly needed to use it. 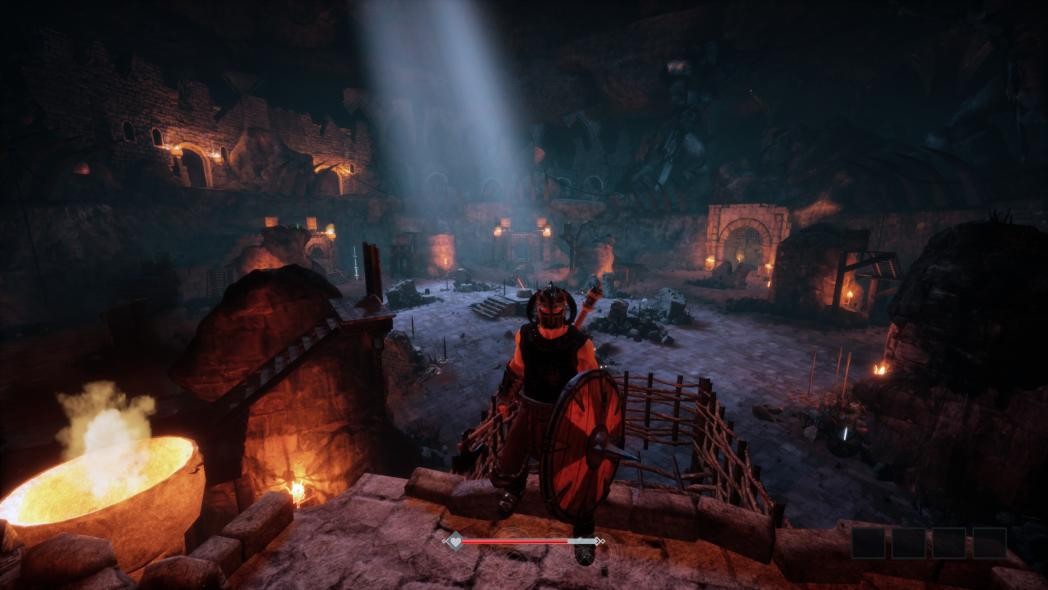 Well, my point here is that the direction is well done and I didn’t have any issues with completing the objective as it even shows up on the side of the screen. I often get lost in open-world games so I am grateful that Rune II carefully directed me so I could find the way easily. Anyway, let’s go on. After completing various objectives, I quickly noticed that the player has to defeat legendary creatures to save Midgard. There are various kinds of creatures such as giants, beasts, and much more. After successfully eliminating them, the player moves to the next area to prepare for the next battle.

In a sense, Rune II is an open-world game, yet the gameplay is fairly linear and there is always an objective the player has to complete to advance. Thus, Rune II doesn’t feel like a typical open-world game, although it still offers the player to investigate the areas. When it comes to the design of the areas, I found that it looked quite decent overall, however, there are small textures that bothered me as they noticeably didn’t fit the detailed world of Rune II.

When starting the game, the player can customize their character and decide between a female or male character. Along with that, various adjustments can be made such as the hairstyle or skin colour. I found it nice that this game offered the option to create my own character, however, the settings were very limited at the same time. I could only select between a few hairstyles whilst a lot of them looked very similar to each other. In the end, I wasn’t satisfied with any of those, but I guess that might be my personal preference as well.

In addition to that, the player can choose between different kinds of weapons and even craft them themselves. Crafting is a huge aspect of Rune II, which I appreciated. There are abilities the player can unlock as well and points that can be given to specific attributes. Well, in that regard, Rune II works like a typical RPG that lets the player decide whether they want to deal a lot of damage or boost their defence. Of course, a mixed option is possible as well so it depends on the playing style of each player. Luckily, there is a difficulty option available as well that makes the battles either easier or trickier for the player. 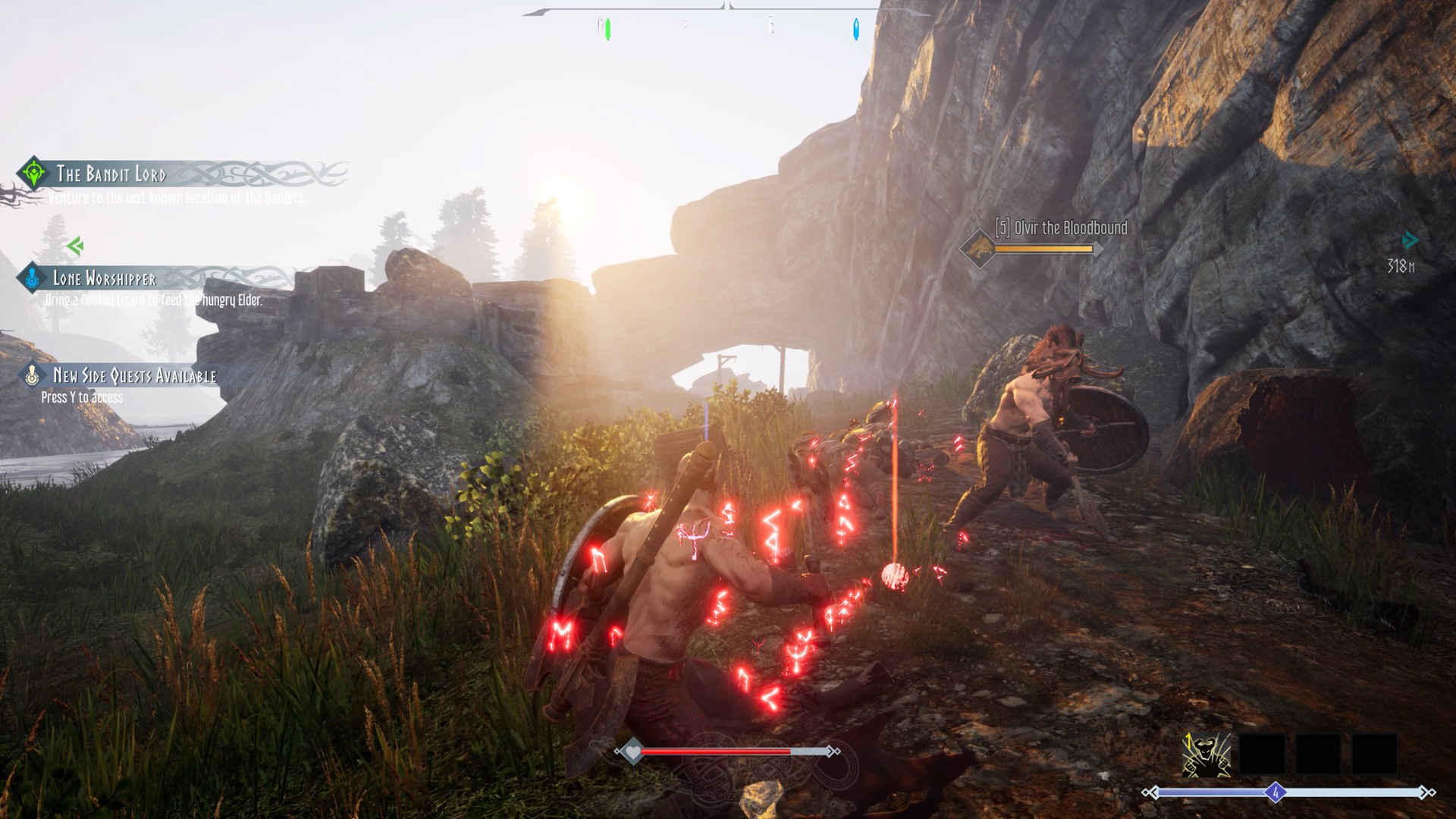 Let’s go back to the issues. As aforementioned, loading times were one of those. In addition to that, I constantly experienced sudden frame drops that utterly disturbed my immersion and after a while, I simply got headaches from it. I’m not talking about occasional hiccups, but those frame drops happened every few minutes and I was very irritated because it affected the sounds as well. Ultimately, this was my biggest issue and it feels like this game didn’t get polished at all. Otherwise, the game runs smoothly, if only it wasn’t for the frame drops.

Another downside is that the multiplayer is pretty much empty. I couldn’t find anyone to play with and unfortunately couldn’t join the PvP mode which is still in beta, by the way. Anyway, Rune II can mostly be played solely for its single-player campaign, unless the player has friends who are joining them. With randoms, however, it’s extremely unlikely to find someone to play with. Even in the campaign mode, I couldn’t enter a COOP map as it would constantly fail to connect.

Luckily, I am personally more interested in the single-player aspect anyway. Rune II certainly has potential and might have become a game I enjoyed a lot, however, the aforementioned issues made it extremely hard for me to go through this game. I was constantly plagued with headaches and annoyance during my playthrough and just wanted to quit after a few minutes. Whilst Rune II ultimately disappointed me, I still hope that this game will get updated in the future to ensure a smoother experience, although I cannot recommend it in its current state.

Whilst RUNE II: Decapitation Edition might have delivered a splendid experience, it turned out to be a huge mess with various performance issues.