It really feels like Microsoft did a huge disservice to understanding Asian culture back in the 90s. For anyone who grew up wasting time on Windows 3.1 or 95, you’ll know that, besides Minesweeper and Solitaire, you could also waste your time with a game incorrectly labelled as Mahjong. In this game, you would basically play match the tiles with a small mountain of pieces. The only way to win was to match them correctly, in the right order, giving it a far more satisfying feeling than beating Solitaire, which would allow you to draw and redraw indefinitely (unless you modified the rules). Anyways, turns out, as we all learned when we encountered anyone who grew up in the East and played Mahjong, that isn’t Mahjong. The real game is a high-stakes, slightly berserk game that people will beat their grandmother over, and often do. So it makes total sense that Zerodiv wanted to take one of the more infamous flavors of the game and bring it to the Switch. It doesn’t totally make sense why they’d want to localize it to English speaking locales, but, for better or for worse, we have Hot Gimmick Cosplay-jong.

Previously, Zerodiv made a point of bringing some of the fantastic shooters that Psikyo has created over the years to the Switch, and this title is distinctly…different. Oh, don’t worry, it’s made by Psikyo, and the success of the game in arcades is indisputable, but the attraction of the title is something a bit off for unaware players. Basically, you’re engaged in a single player version of Mahjong, which is already an odd start. Then you realize there’s two modes: regular play and Jong-fight. Despite it being single player, there is zero slider bar for CPU difficulty, which stands in stark contrast to other Psikyo titles (which often had several levels of damage to deal with). For the sake of sanity, let’s start with the standard play mode. 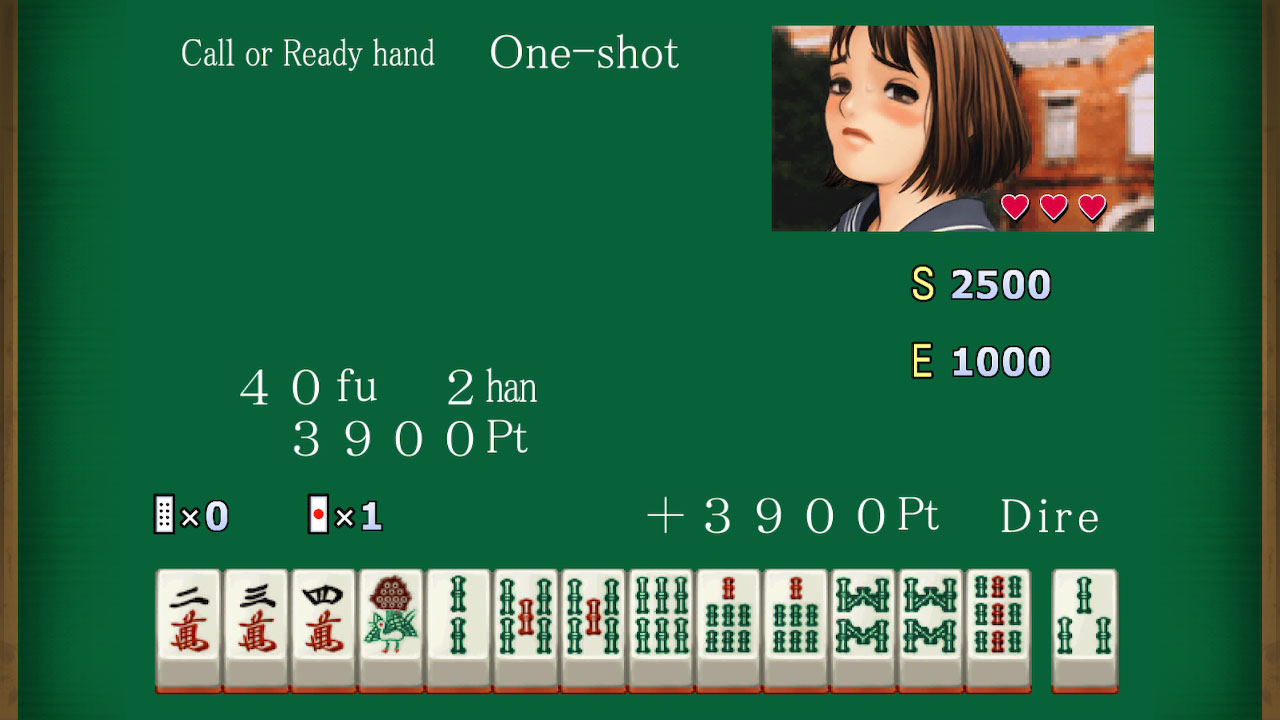 If you’re unaware of the rules of Mahjong, I’ll try and run it down as fast and succinctly as I can. You pick up and play tiles that have different suits and characters on them, similar to a card deck, and you try to either get a pung (three of a kind), a chow (three in a sequential order) or a kong (four of a kind). If you can get four sets and a pair in your hand, you have a mahjong, and you’re the ultimate champion. As you play, you get points for whatever you manage to procure throughout the rounds, and you’ll ultimately win if you can get enough wins and drive your opponent into the negative in lost points. However, it’s important to note that the CPU whom you’re playing against already knows these rules and probably knows more about some of the secret plays (melded pungs, concealed kongs) and is also playing to keep her clothes on. Oh, was that not cleared up?

Hot Gimmick Cosplay-jong is all about you, a faceless weirdo, challenging three equally strange women to games of Mahjong. The first is a schoolgirl who uses foul language. The second is a 18 year old girl (why did that need to be cleared up?) who wears a beret and refuses to eat carrots. The third is a blonde American who thinks Japan is worse than the USA. I’d like to point out the game deliberately does NOT tell us how old the school girl is. Anyways, all three of them get into verbal altercations with you (patriotism, carrots, etc.) and challenge you to a game of Mahjong. If you win, you get to…dress them up in the costume of your choice. And by that, I mean there are already costumes predetermined that they’ll get shoved into and pose for you in when you win. Yea. And there’s not difficulty persay, but the schoolgirl plays much worse than the American, who is the top tier standard boss of the game (before the hidden characters come out!). They each chew you out in broken text windows, then play Mahjong, then honor their loss by dressing up in fetishistic choices and being reluctant about the whole thing, which probably plays into the fantasy even more.

Alright, let’s get some things straight. I’ve never been shy about these types of games. From GalGun 2 to NEKOPARA, I’ll gladly review titles that hedge more into the eroge section because, well, there’s an audience for them, some are genuinely fun (GalGun 2, certainly), and it’s a different kind of experience. But there needs to be something at the core. Senran Kagura was very unabashed in what it was providing for gamers who liked waifu massaging, and that’s well and good. Hot Gimmick Cosplay-jong, however, is hampered by the very experience it seeks to give. Firstly, the game isn’t that indecent to begin with: worse you’ll see is some cleavage and thigh. But Nintendo wanted to make sure you saw even LESS and stepped in to censor certain things, like a panty covered butt. Let’s be perfectly clear, there are no sexual acts or implied sexual acts in the game or in the poses at the end. So you’re purely playing this to get to see the girls in costumes at the conclusion of the game. 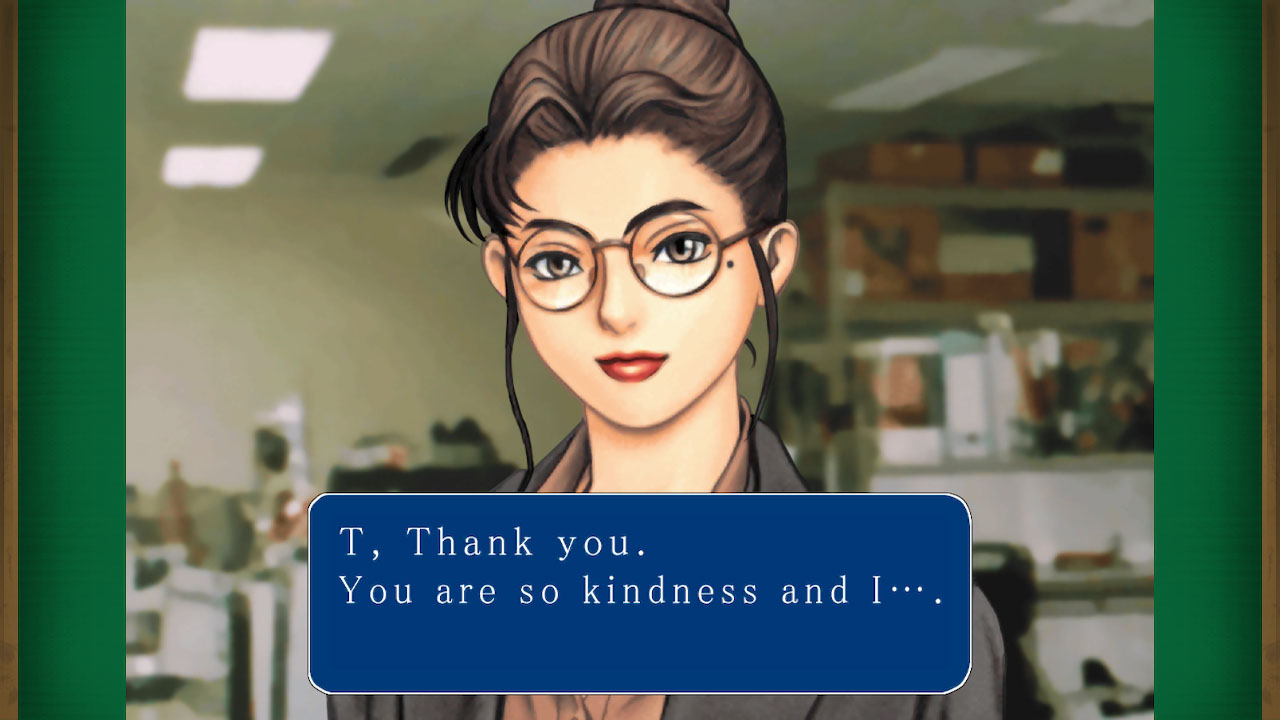 The issue comes down in twofold. One, the gameplay is very mechanical and requires some base knowledge of the game, as it gives zero tutorial or instructions. If you’ve never played Mahjong before, you have no hope. So ignoring everything else about the lack of information regarding the game, it’s totally a lockout for beginners. Two, this is a game from 2004 that first premiered on the PS2. Yes, the controls and the interface have been updated for the Switch, but the graphics, distinctly, have not. The girls all have a very off-brand looking sort of style, like they tried to copy familiar anime tropes of the mid 90s but did so with a small impediment to their depth perception. The girl’s heads all look slightly off, and the costumes, while slightly revealing, don’t do anything in the realm of really being exciting or sexy. It’s a very hollow victory, even if it does get you closer to unlocking other characters, like a nurse who is the antithesis of the main three (she’s quite friendly), but still needs to throw down in Mahjong.

I will admit there is some finesse to the game. The dog mascot, who runs around and points out different things/declares plays, is a cute and very well animated being. The soundscape is decent, though totally unmemorable. The localization that Zerodiv provided makes for incredibly broken and often misspelled word bubbles, but that actually adds to the humor of it all: nothing like someone from the US talking smack in broken English. And then there’s the Jong-fight, which appears to pit two guys in morph suits (possibly famous manzai comedians?) against each other. As you play, the different sets that you can drop will trigger short fights between the two, starting with simple punches, evolving into suplexes, and ending when one inexplicably draws a gun and shoots the other. It sounds berserk, but it’s pretty damn funny, and helps add to the levity of it all.

Hot Gimmick Cosplay-jong is such an odd duck. It has all the sex appeal of that pen you got at a gas station in Reno that has a woman’s dress fall off when you flip it over. But you know SOMEONE loves that pen, and shows it to everyone at their seedy office, and they all have a good laugh over it. There’s a reason that this game performed so well, and got ported several months back to Japan, and finally got localized with a whopping 20 dollar price tag. All the scenes that you unlock, both of the costumes and the jong-fights, are available in the options to view separately so you don’t even have to play again to see your favorites. There’s a fanbase out there, folk who strongly enjoy Mahjong and semi-erotic cosplay, and good for them. Personally, as someone who sucks at Mahjong, this game was a bad fit for me, but I can see the appeal. Sort of. Anyways, you know what’s up: get it, don’t, just know what you’re in for.

When the screenshots that the press kit provides has broken English, you know you’re in for a rough time.