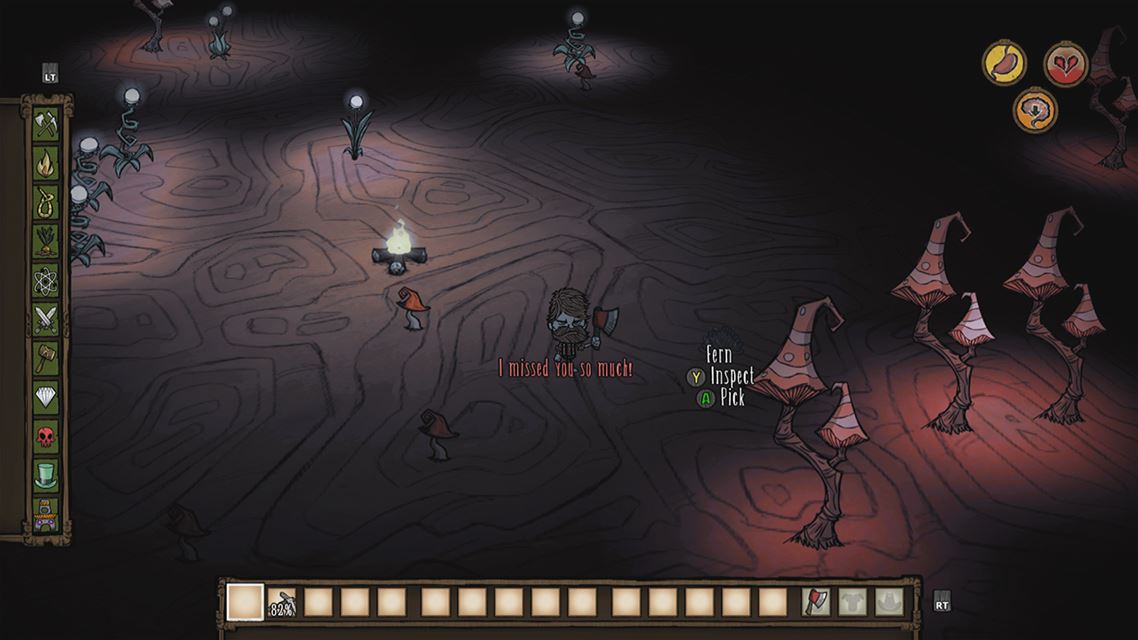 Roguelikes are, by definition, rather unforgiving videogames. Permadeath is an often brutal mechanic, one that can either make or break a game based upon the success of its implementation, and while its largely successful here, it’s also unforgiving to an extent that occasionally borders on the unfair.

Don’t get me wrong, Don’t Starve’s bizarre world and bizarre logic is great fun, and dying at the start, be it from starvation or other means (wolf attack anyone?) can be both oddly enjoyable and unquestionably educational. For the first few hours, dying feels like par for the course with each lesson learned used to get your new adventurer that little further than the last, to survive that much longer and to subsequently experience more of what Don’t Starve’s resolutely bleak fantasy world has to offer……..but then you get good, and that’s where the problems start.

It’s one thing to deal with permadeath after 20-30 minutes of gameplay, but once you’ve survived for hours, once you’ve made real progress and actually started to build up a sense of location, then suddenly death, especially if it feels unfair (which it occasionally does), can be a brutally depressing experience. I suppose that is the point to an extent, but that doesn’t make it any easier to bear when you’re essentially taken back to square one after putting hours upon hours into survival, exploration and building up both your equipment and skills. 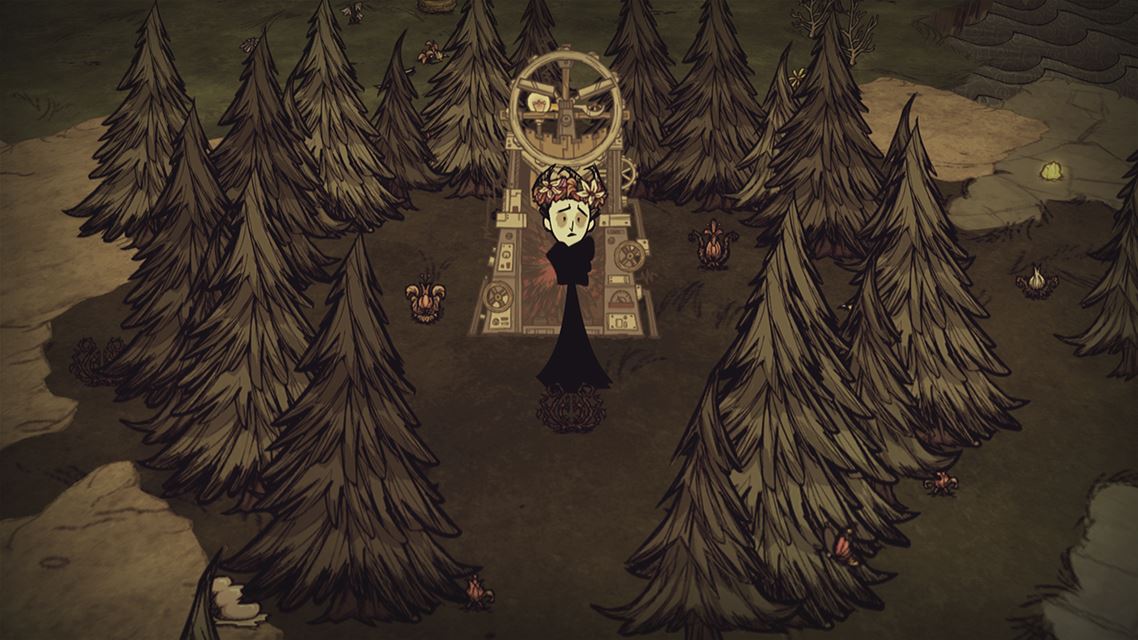 An array of different abilities, items and crafting abilities ensure that each playthrough feels at least somewhat unique, and there is no doubting that the fear of permadeath makes the overall experience that much more intense and rewarding, but man, dying is just the worst. There have been times after an especially long run that I was convinced that I was done, that I wouldn’t come back to the game, but you know what, I did – and for all my moaning, I’ll almost certainly continue to do so for quite some time to come. A few holdovers (crafting recipes etc) do make death a little easier to take, but going from essentially building a home to collecting twigs again can be unbelievably disheartening. Some will throw in the towel after that first big loss, bit I fancy that many more will stick with it, too eager to go that little further, to see that little bit more. Sure, those occasionally random deaths (they are very rare), can make restarting a little tougher to put up with, but the vast majority of deaths come with the exact knowledge of why it happened and the subsequent belief that you won’t let it happen again.

It’s what drives the experience, and really, what makes Don’t Starve what it is. Sure, the crafting is fun and the constant learning experience does make this a consistently enthralling experience (Don’t Starve’s world abides by its own very unique sense of logic), but it’s that constant fear of death that makes even the most fundamentally mundane of moments feel like intense, edge of your seat affairs. Whether it be gathering basic resources, surviving the night, adding to your newly created base of operations or pushing out that little further into the wilderness, survival (and the constant fear of death) dictates your every move.

Initially, it’s the simple concept of survival that drives you – gather resources, create items, survive the night. But soon, it becomes about keeping what is yours and protecting what you have built. Again, as you progress and have a more tangible effect on your surroundings, the thought of losing your progression looms increasingly large, and while it sucks when you do (and you will), there is no replacing that feeling of constant threat and trepidation that ultimately drives your experience from the get-go.

As bleak as all this sounds, the edge is taken off by the games’ somewhat cartoonish visuals. It’s hardly sunshine and lollipops, but is does have the air of early Tim Burton work in that it combines the macabre with the slightly surreal to create a world that while unquestionably bleak, is home to enough fantasy elements to make it as oddly enjoyable as it is depressing. In many way, it’s the perfect artistic design for a set of mechanics that are themselves both oddly enjoyable and undeniably depressing (or at the very least, strange and unusual). 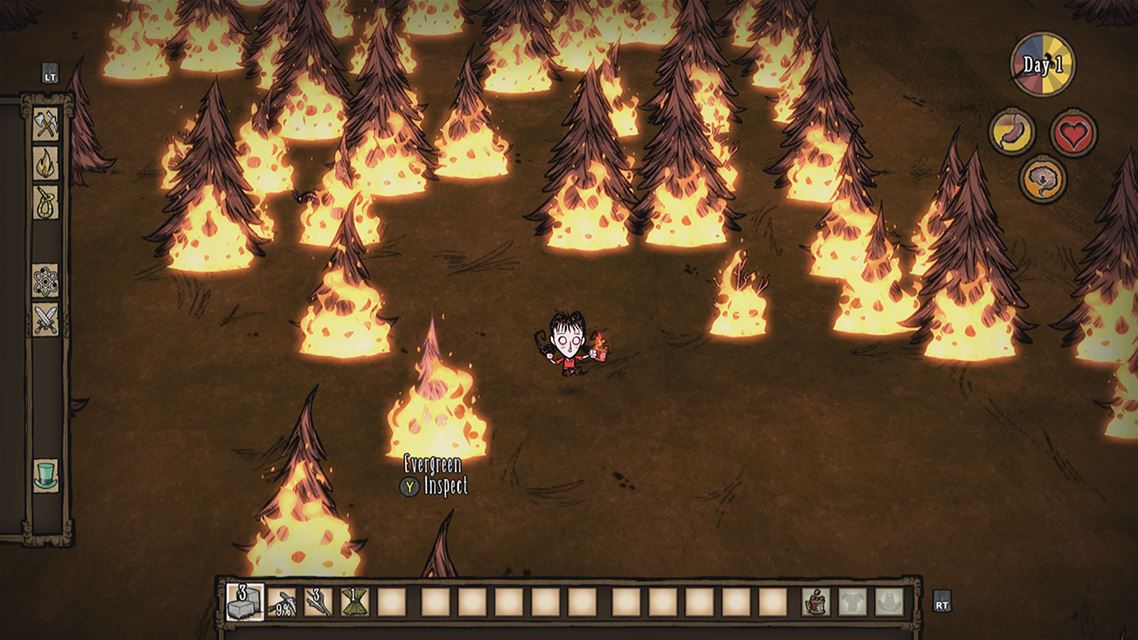 With all of the previously released DLC also available with this latest, Giant Edition release of the game, Don’t Starve certainly isn’t shy of content. Whether you be a newcomer or a seasoned survivalist, there is plenty here to keep you busy for many weeks and months to come. The new DLC content in particular seems largely geared towards high level players, but even then, it still adds plenty of new content, gear and ecology for newcomers to enjoy too. It’s still the same experience it has always been, but Don’t Starve’s unique brand of survival exploration benefits from carefully implemented additional content more than most with even minor changes often felt throughout the entire experience.

It has the potential to be both painfully depressing and outrageously infuriating, but Don’t Starve: Giant Edition works largely because of its potential to do so. It’s roguelike structure won’t be to everyone’s tastes, but for those with the patience to live by its rules and learn from their own mistakes, Klei Entertainment’s unique survive-em-up will deliver one of the most rewarding, tense and exciting gaming experiences of the year.