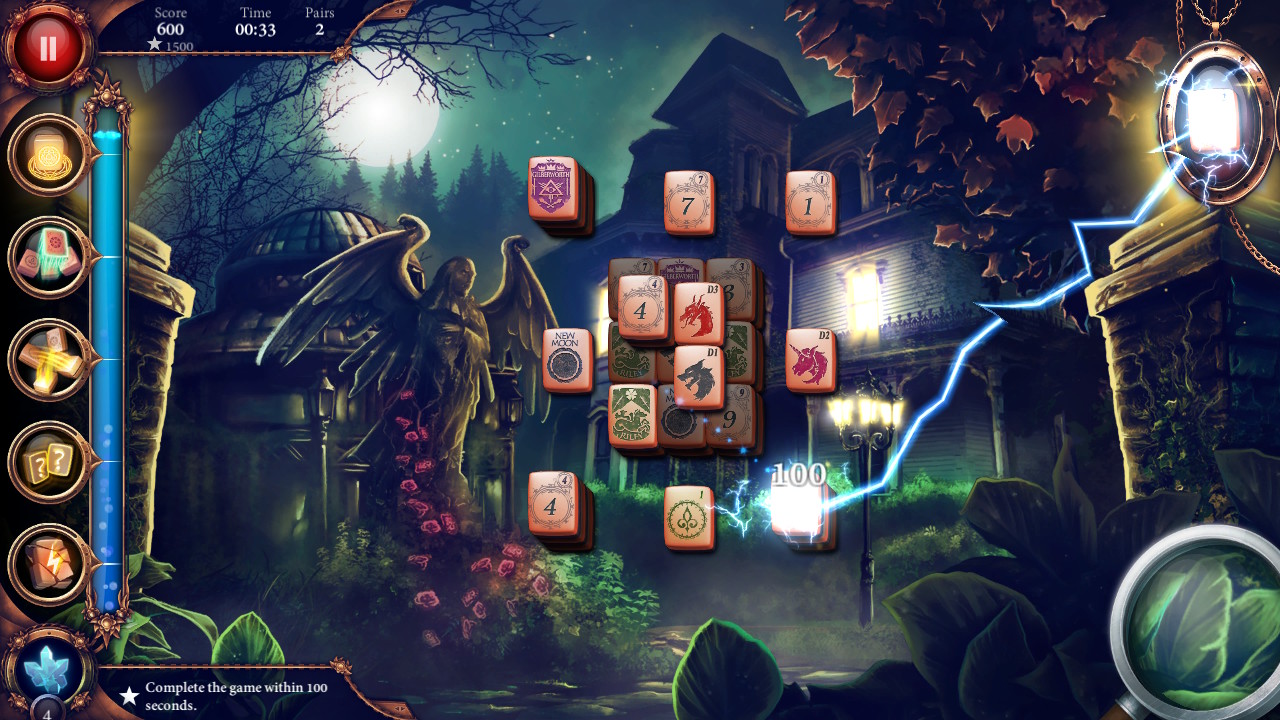 I have to admit that I’m quite partial to the odd puzzle game or two. They make a nice break from the urgency or action of adventure games, or shooters, should I fancy a nice relaxing evening of gaming. However, despite my love the genre, it can also be a style of gaming that can lack long-term appeal with a repetitive mechanic or failure to engage with interesting themes. The Mahjong Huntress though, a new puzzle game developed by Nawia Games and published through Forever Entertainment SA contains an element to its puzzling mechanics that keeps you engaged with a story of mystery and intrigue, as well as a variety of puzzles that are interesting and fun to play.

The main premise of the game revolves around the ancient Chinese game of Mahjong; a game where you match pairs of tiles to uncover further varieties in a stack until all the tiles have been used up. However, in a form of presentation rarely seen in puzzle games these days, The Mahjong Huntress also runs along the lines of an adventure story, as well as present boss battles in the form of a match-3 style of game. It all adds to bring a touch of variety to the game, as well as a form of engagement with its plots and themes; a series of elements that keeps things fresh and interesting, forcing to play through just to see the story to its end. As well as these elements to the gameplay, the game also boasts a number of modes to add a form of longevity and promote an appeal that will entertain over the long-term.

The story follows the exploits of Mary Elisabeth Riley, an ambitious young woman whose twenty-first birthday is approaching quick; as well as her arranged marriage to Sir Charles Gilbertsworth. However, she is reluctant to go and commit to a marital home, feeling that it is not the time or place, or even the man; instead she feels an undeniable urge to make something of herself, rather than take on the role of a housewife and serve her master. As the ceremony approaches though, the intended groom goes missing from the family’s mansion. In normal circumstances, the disappearance of her intended wouldn’t have bothered Mary, but with her mother, the widow Riley, being accused of events behind the disappearance, Mary sets off to find out the truth of her missing groom-to-be and discover his true whereabouts. However, her journey reveals more than what she had bargained for, as she stumbles upon a series of supernatural affairs, as well as uncovering the secrets of her family’s past. 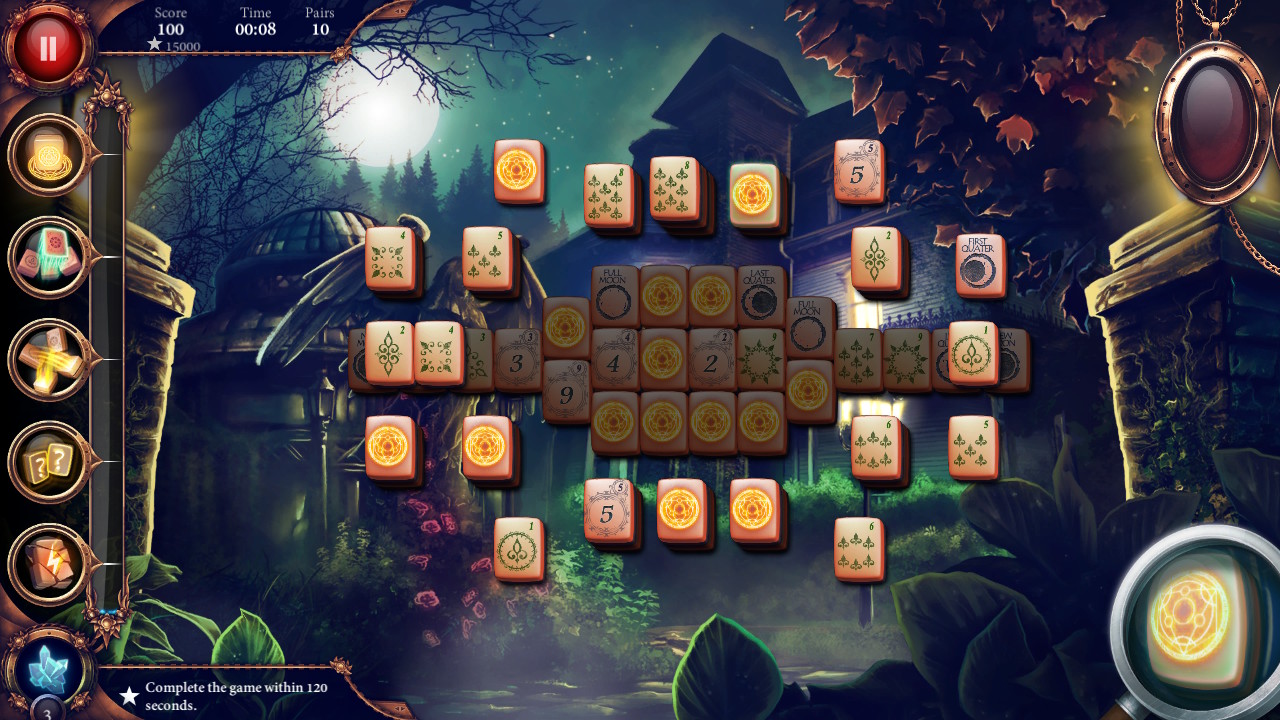 Your journey takes you though six various locations, or chapters, with each one housing a number of levels as you search for clues and follow the trail to Sir Gilbertsworth. In order to find the clues, or unravel the secrets of the family name, each of the levels require to solve a series of Mahjong puzzles in order to advance. Each of these puzzles come in a variety of forms, although the basic premise follows the same rules associated with the game of Mahjong. Each puzzle completion awards you with a specific clue, as well as advances you to the next level and progresses the story. In terms of playing the game of Mahjong, the puzzles themselves contain a nice balance in achieving success and the challenge which they present. There’s nothing here that is too difficult or frustrating, largely due to a number of power-ups that can be used to help you on your quest.

By stringing together a number of moves in quick succession, you fill a meter which unlocks special abilities. These can range from re-arranging the tiles to revealing pairs or hidden tiles to name but a few. Should you find yourself stuck or unable to make another move, then these power-ups become invaluable in helping to clear the deck. It’s a nice mechanic, offering you a range of moves and creating a game that is easy-to-play and instantly accessible to anyone. With over three-hundred different boards, sixty for the campaign and over two hundred in a separate challenge mode, there’s more than enough content here to keep you playing for weeks, even months.

Each of the puzzles also come with a number of parameters that award a series of stars, up to three, should you fulfil their criteria. As well as these, the game also contains a number of achievements which detail certain tasks to be completed. By successfully matching certain pairs or clearing a set amount of tiles, you are then awarded crystals, which in turn allows you fill your ability meter instantly should you require a certain power-up, yet haven’t reached its pinnacle through a series of combination moves. However, the game doesn’t just contain the Mahjong format of puzzling, as along your journey, you’ll be required to fight certain boss battles which are presented in the familiarity of a match-3 mechanic. 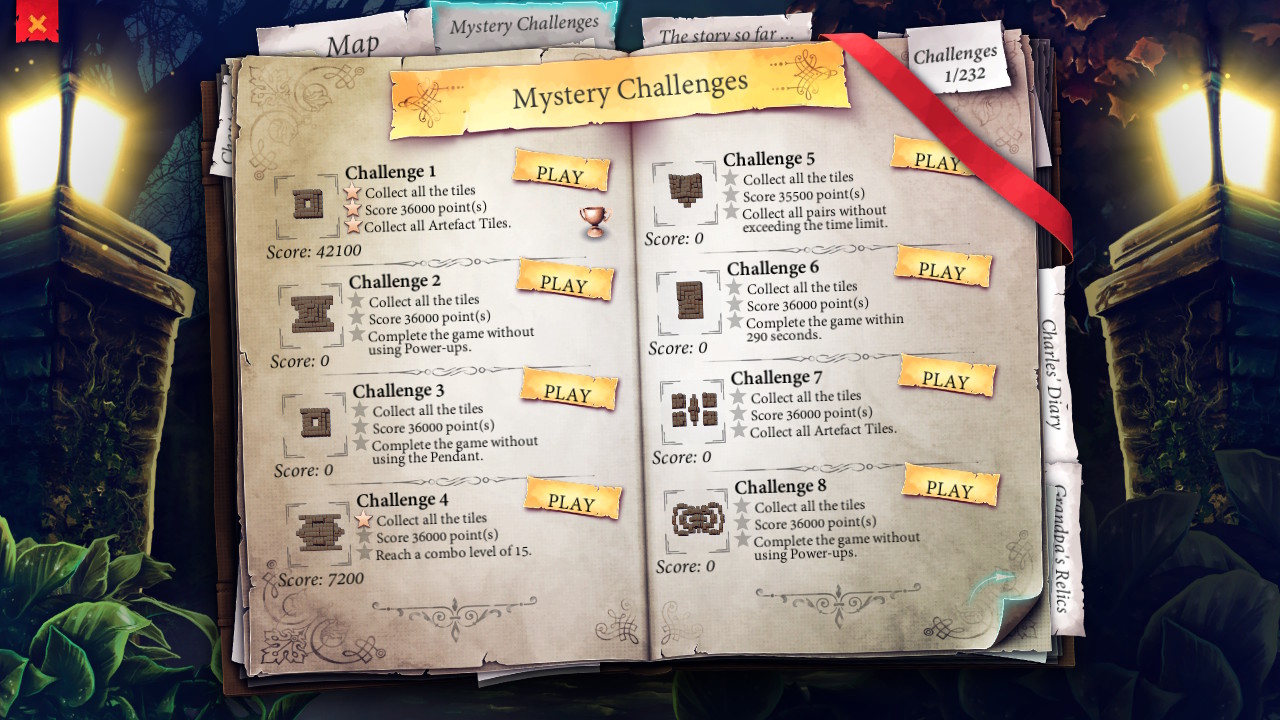 Presented with a grid that contains a variety of different coloured gems, you must swap between rows and columns in order to produce a chain of three identical gemstones. However, with you being faced opposite your foe and with each character containing a life bar, you must match the series of specific gems that is detailed next to your character model, whilst avoiding the gems required by your enemy. With each successful chain, you fill an attack meter, which then deasl damage to your opponent when full. Once the meter has been filled, then the type of gem you require changes. Once the enemy’s life bar has been depleted, then you are victorious. Although the match-3 mechanic is a tried-and-tested formula, the way in which these bouts are presented offers a fresh take on the premise, creating an engaging style of play that not only offers a break from the Mahjong style of play, but also creates some of the game’s most compelling moments.

Everything within the game has a good level of presentation, from the boards and tiles of the Mahjong games to the boss battles and storyboards. Although narratively written, the static cut-scenes contain a nice level of detail, matching an aesthetic that is very similar to the style of many point-and-click adventures. Saying that though, the plot and themes of the story can be a bit clichéd at times, although it still holds a level of interest. The control scheme is suitably tight too, with joy-con control that is easy to execute, as well as the ability to use the touchscreen should you play in the Switch’s handheld mode. In fact, as far as puzzle game go, this is a game that holds very high levels of engagement, presentation and enjoyment within its genre. Saying that though, I did, unfortunately, come across a couple of bugs within the game, mainly revolving around a failure to load a specific screen or face pictures for the tiles. There was nothing game breaking or frustrating here though, as a quick reset soon had me playing again.

Overall, The Mahjong Huntress presents one of the best puzzle games I have had the pleasure of playing on the Nintendo Switch. All of its elements, from puzzles to story and presentation to controls are suitably engaging and a joy to use. The mechanics of its puzzles present a nice balance in their challenge and this, coupled along with the element of achievements, power-ups and star awards presents enough variety and content to keep you playing over the long-term; especially with a series of separate puzzles in the Mystery Challenges that prolong the shelf life of this game. However, it’s biggest selling point has to be the price, for less than a five pounds, or bucks, the overwhelming level of production and content offers a superb example of value for money. If like me, you are quite partial to odd puzzle game or two, then this is a title that you simply need to own, as it’s easily one of the best of its kind within its genre.

A surprisingly entertaining twist on the ancient Chinese board game of Mahjong, boasting a wealth of options, content and playability.