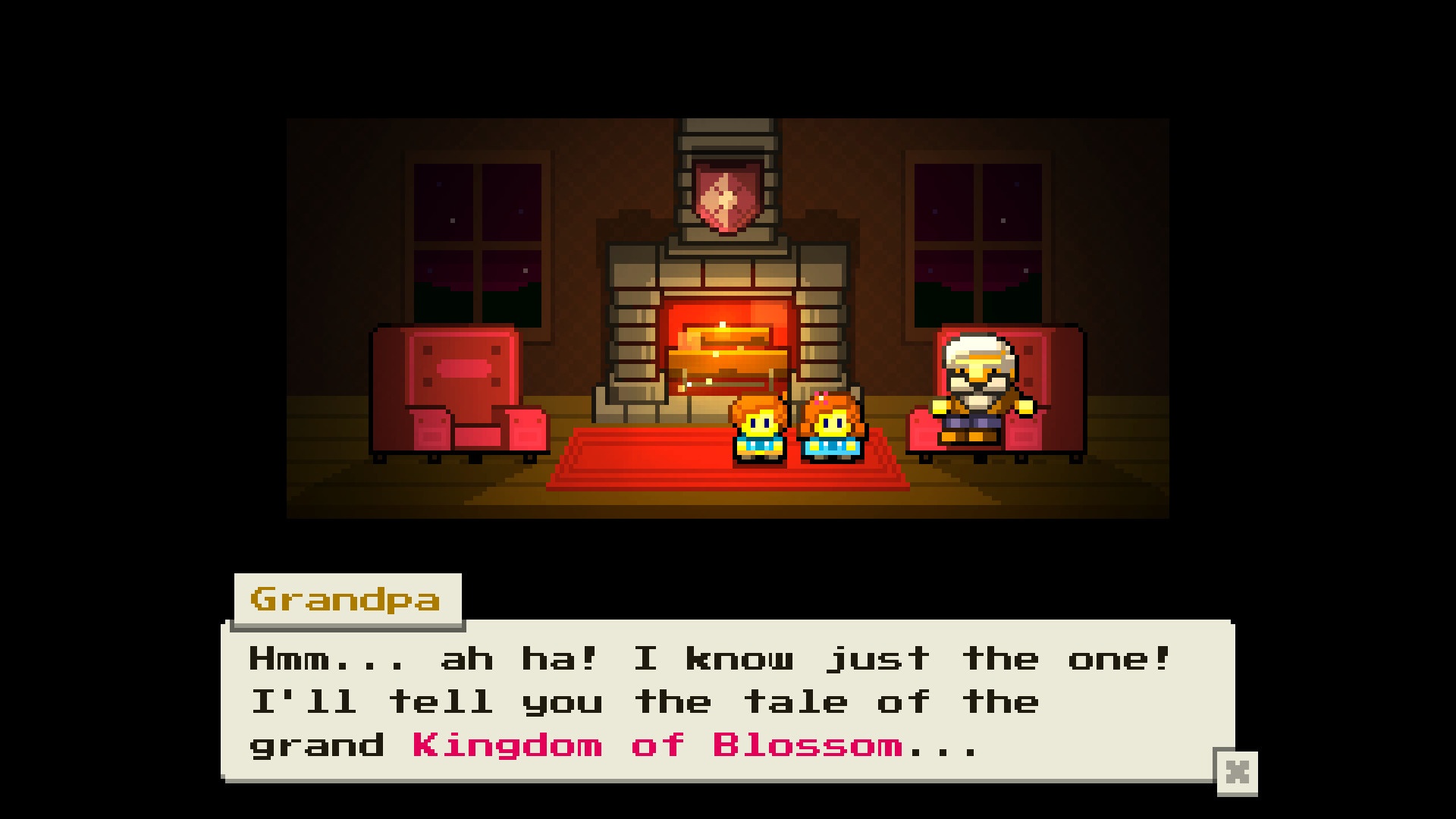 Blossom Tales: The Sleeping King comes from Castle Pixel, the same studio that made the platformer Rex Rocket which was released back in 2014. Blossom Tales represents a huge departure from their previous game in terms of genre, but if you compare both you can see that there’s one thing that’s still retained, and that’s the pixel art. As someone who has never played any of the Zelda games I feel motivated to try any game that, even remotely, seems to be inspired by them. This way the chance of comparison is pretty much null, and there’s no room to fall for the nostalgia that fans of the series most of the times do.

In this game you play as Lily, a recently appointed member of the Knights of the Rose order whose purpose is to defend the kingdom against all evil. Without spoiling much, in a quick turn of events you find yourself searching the land for a series of ingredients that will allow you to complete your quest, and defeat the ultimate evil who’s threatening the peaceful everyday life of everyone in Blossom. This is a game with a strong emphasis on combat and exploration, where you’ll be rewarded for exploring everything and looking for secret dungeons and chests. You’ll have to manage your health and energy, which is used to use secondary weapons and abilities, as you go through the square shaped dungeons and map segments, completing puzzles, fighting enemies and bosses, as well as collecting items that will permanently increase your energy and health pool.

The combat is fairly simple and easy to grasp, and that is due to the fact that the game doesn’t have that many different key combinations to learn and also due to the fact that the game is fairly easy on its own, at least during the most part of the game. The sword is the main weapon and you can’t replace it, it’s attacks are fairly basic, consisting in a simple wide slash, a circular spin and a powerful jump attack. Nevertheless, as you progress through the story you’ll unlock more weapons, such as a bow and a boomerang, and even spells, which are paramount to get through certain puzzles and fights. There are also weapon upgrades that you can acquire by completing side quests, and shops where you can purchase things like potions and revives. 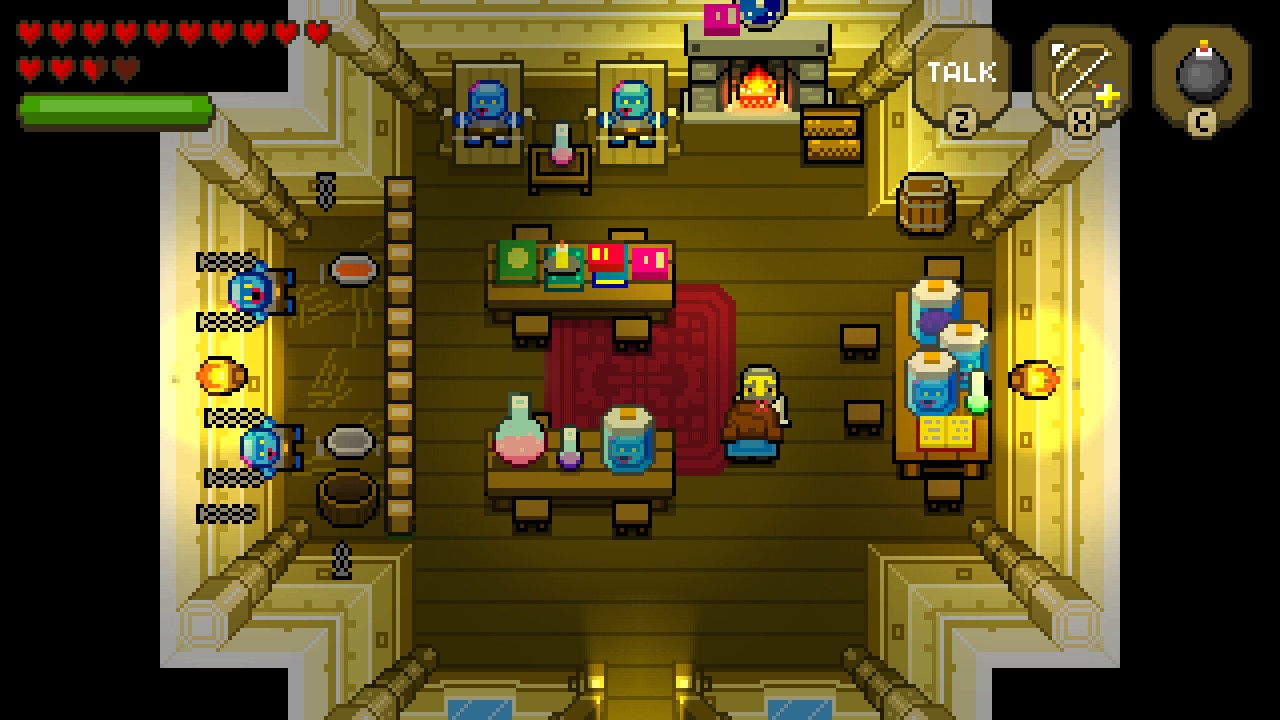 For the most part there’s enough enemy variety to keep things distinctive and interesting, with different regions in the map having a few types different of enemies and bosses. Speaking of which, there are a total of five different regions in the world map, and while at first you’ll have to walk there, upon arrival you’ll usually find fast travel points that you can use later on. In the same sense there are also five major dungeons unique to each area which you’ll have to beat in order to progress through the story, and all of these are unique in their own way, either in visual terms or the type of enemies, traps and puzzles you’ll find there. Nevertheless, the fact that you can’t place markers on the map is somewhat disappointing, because you can find areas before you can even access them and finding them after the first time can sometimes be a challenge.

The story begins by a fireplace, where two children (Lily & Chrys) ask their grandfather to tell them a story, to each he decides to tell the tale of the Kingdom of Blossom. Like any grandfather that’s telling a story to their grandchildren, the kids are bound to decide certain aspects of the story and, in that sense, both Lily and Chrys suggest different paths the story can take in two different occasions, allowing you to choose between one of them. One small detail that stood out was that, whenever you load back into the game, the story starts off by the fireplace as if it was the next day’s evening already and they were recapitulating what had happened in the story up until that time.

Most of the narrative is delivered through these three characters as they’re commenting on this tale, but you can also interact with people in the world, some of which might give you hints regarding certain locations, while others might give you fetch quests or ask you to defend them while they attempt to do something. With that said, the game does have its fair good amount of fetch quests though, which, despite being optional, provide convenient rewards. 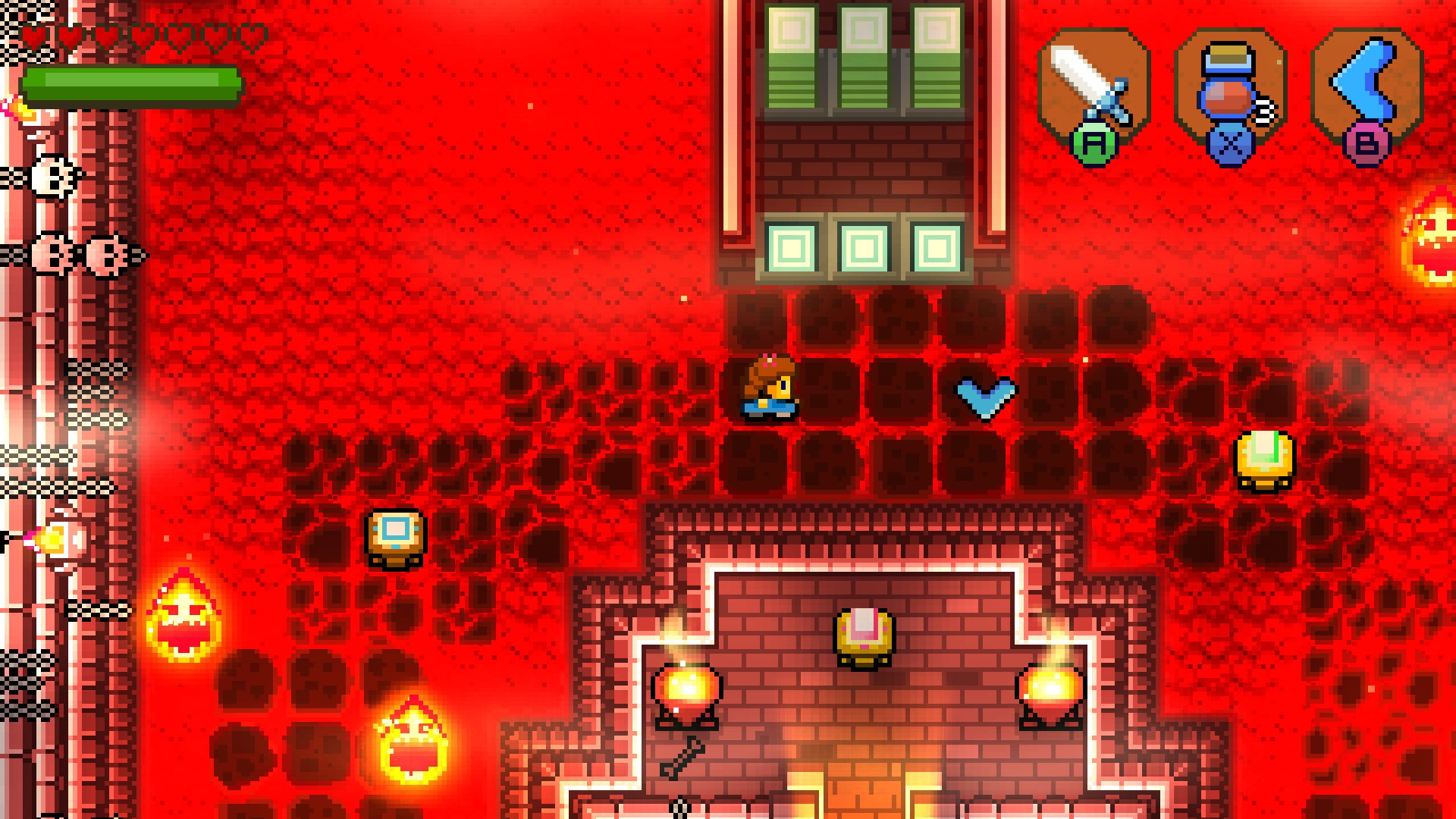 The pixel art style is certainly adorable and, overall, it looks fairly good, but I do find that some of the characters look rather weird, as if they were shrunk. The game clearly shows that a lot of thought and care was put into it, not only in terms of visuals but also in terms of game design and story. In any case, the soundtrack was a bit of a letdown, it has its catchy moments but it quickly becomes repetitive. One thing that does hurt the game in my eyes is the difficulty, or in this case the discrepancy of between the last dungeon and the rest of the game. Most of the puzzles and the boss fights are extremely simple and easy to get past, it was only in the final dungeon that I felt that the difficulty increased exponentially.

It took me about 8 hours to complete the game, but I didn’t find and do everything that it offers so there’s probably still a good chunk of content that could increase that time above the 10 hours mark. Still, even though I was feeling that the game was extending itself towards the end, I found it to be plenty of fun, and it’s perhaps what some Zelda fans might be looking for on the PC. If you’re looking for an extremely polished game focused on exploration, puzzle solving and combat, I’d say to give Blossom Tales a try, for it might surprise you.