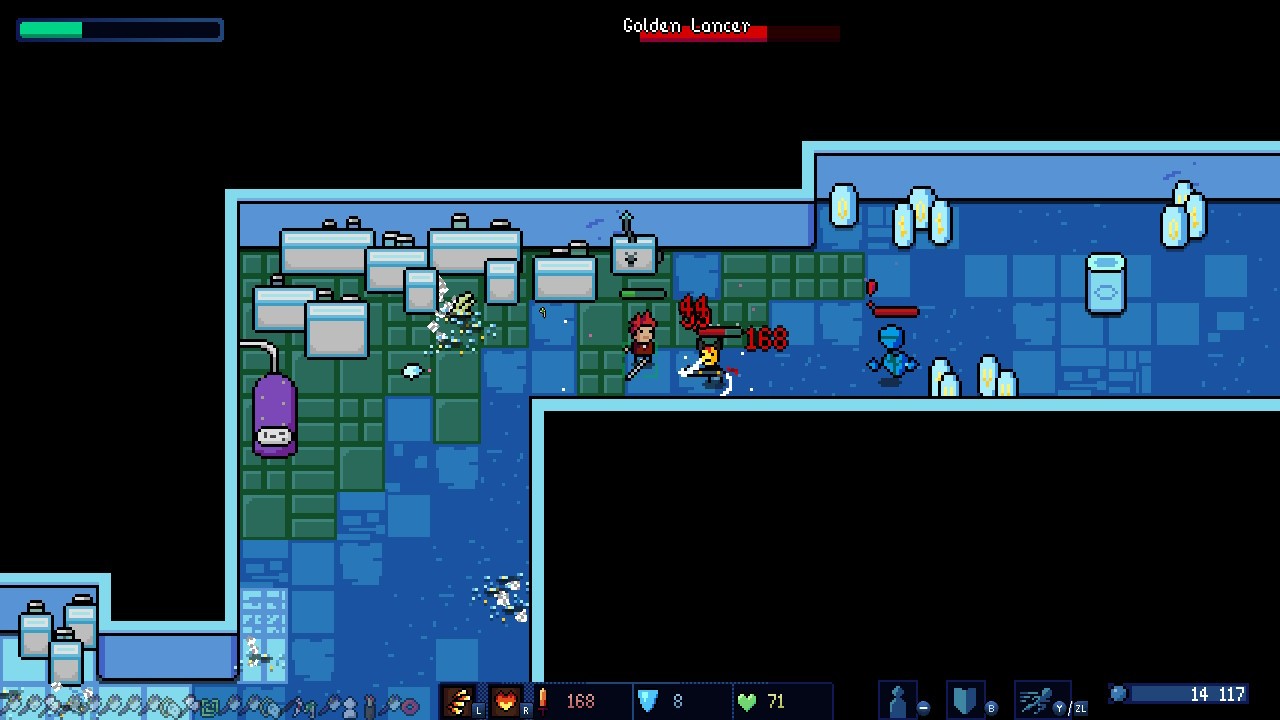 It would be easy to assume that “Azurebreak Heroes” is shovelware. The promo picture on Nintendo’s eShop looks like a $20 Deviantart commission. At first glance the pixel art graphics seem like they were drawn in the version of MS Paint that came bundled with Windows 95. Sure, there are things about “Azurebreak Heroes” that are clunky and idiosyncratic and we will cover them in detail in this review. But this little 2D action RPG plays like a labour of love, and I would dismiss it at your own peril.

Let’s get one thing out of the way first: no one is going to confuse “Azurebreak Heroes” with “Hades.” This game is seemingly the product of one Piotr Powroziewicz’s work and has all of the limitations that come with being developed by a single person. But it transcends those limitations through sheer charm. Those graphics that look like they were put together in MS Paint? They grow on you when you start to realize that there are multiple sprites for every type of loot, for example. Or that there are little demons hanging off of the ledges of the enemy stronghold you pass through at the beginning of a run.

But the meat of “Azurebreak Heroes” is in the gameplay. There are six different heroes to unlock, and each of them has a unique playstyle and skills. You begin with Flynn, a spiky haired soldier with a sword, but my favourite character to play as was Spawn, a terrifying melee-heavy Cthulhu blob with the ability to teleport across the screen and maul enemies with its bare hands. There are others, but I won’t ruin the fun by spoiling them here. 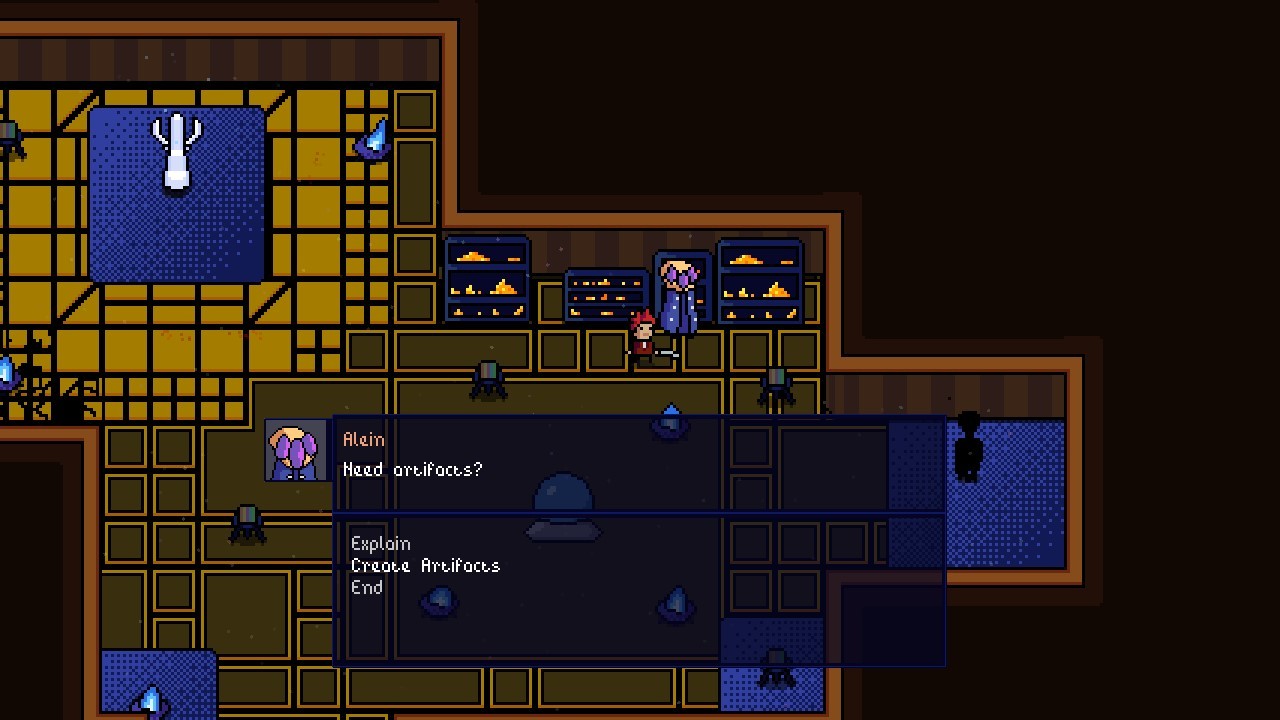 The gameplay loop of “Azurebreak Heroes” is as follows: Run around killing things > collect azure and crafting materials > enable artefacts via books you find in chests and amongst the innards of your pixelated enemies > kill more enemies, more quickly and with more style > die > unlock characters and craft new artefacts that you can enable in your next run > run around killing things.

We’ve already spoken a bit about the running around and killing things part of “Azurebreak Heroes,” which is every bit as addictive and fun as you would hope it would be. But what about the rest of it? There is something very old school about this game in that it does a terrible job of explaining what everything is and how it all works. Although you are presented with a friend/guide, Richie The Rat, who explains things to you in a droll and confusing fashion, you are pretty much on your own. Luckily, you have me, however. There is blue stuff that sprays off of most of the things you break and most of the enemies you kill called “azure.” This blue stuff is your currency. You can use it to open up tiers of artefacts (power ups/stat boosts/whatever) and to buy new characters. You can also exchange it for a completely different blue thing called “azurite” if you happen to run into some shady guy named Digmy in your travels.

This disconcertingly named substance is a crafting material, and enemies will also drop it, albeit in far smaller amounts than azure. There are other crafting materials as well; things like plants and monster flesh and little glassy triangles. You use these crafting materials to craft artefacts back at your base in-between runs after using azure to unlock the ability to craft them. While I take some credit for explaining it poorly, this mechanic sounds confusing because it is, and the game itself does an even more terrible job of explaining it. While fun once you get the hang of it, the crafting in this game (and the explanation of how it works) is pretty clunky and idiosyncratic. If you grew up renting games at Blockbuster that mostly explained themselves in the form of manuals that had long been lost you will feel right at home here. I found it charming, but results may vary. 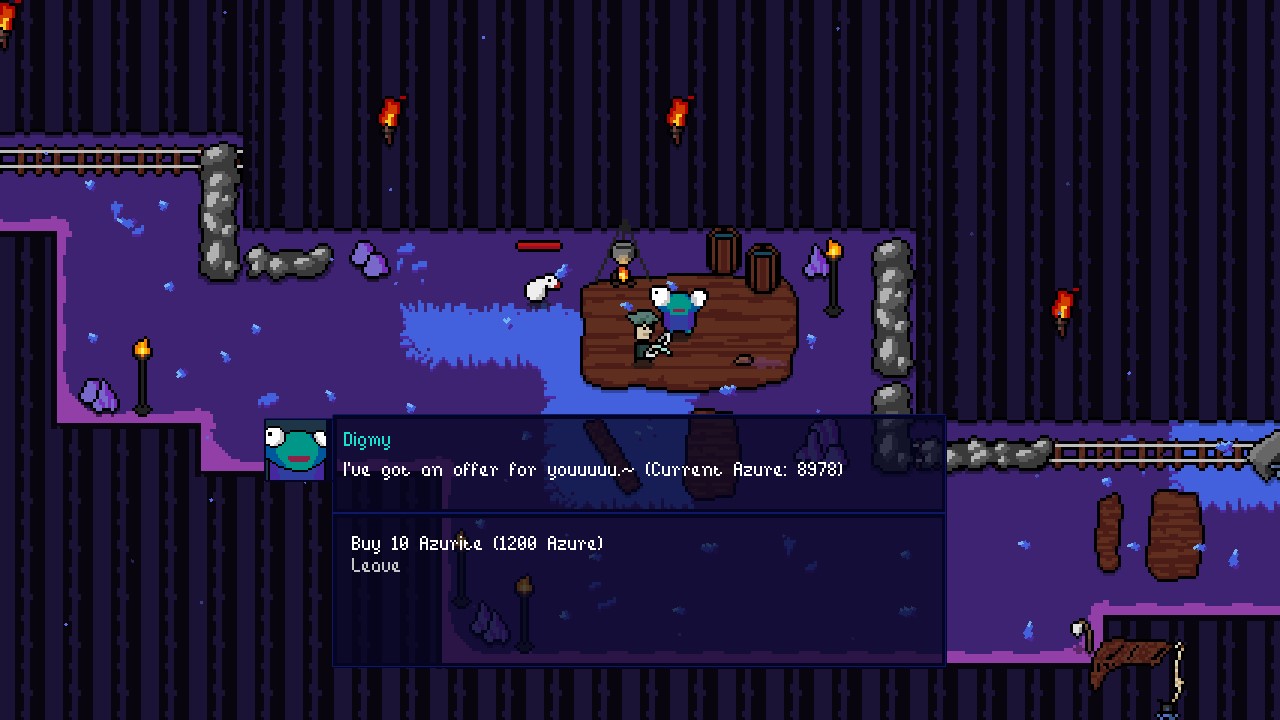 Artefacts buff your character in numerous ways. You start a run naked, so to speak, with none equipped. As you run around killing things, sometimes one of them will drop a book that you can use to equip any artefact you would like. By the time you get killed or end your run you might have more than twenty of these things equipped. There is a ton of variety in the artefacts. Some are simple stat boosts to your health and ability to deal damage, while others are companions that heal you or hurt enemies. One even inflicts random status effects against enemies every time you hit them.

“Azurebreak Heroes” has a terrible title and the cover art might turn you off. I’m not a hundred percent sure it’s worth the 7 dollars MSRP when considerably more polished games like “Swords of Ditto” go on sale for that price point. But it is absolutely worth playing and whenever it goes on sale you will not regret buying it as long as you put the effort into figuring the systems out. This game has charisma for days and gameplay to match. I’m really looking forward to seeing what this developer does if he gets even just a slightly bigger budget and team to work with.

“Azurebreak Heroes” looks like shovelware, but looks can be deceiving. Once you get used to some weird mechanics, this little-ARPG-that-could is full of charm and content.