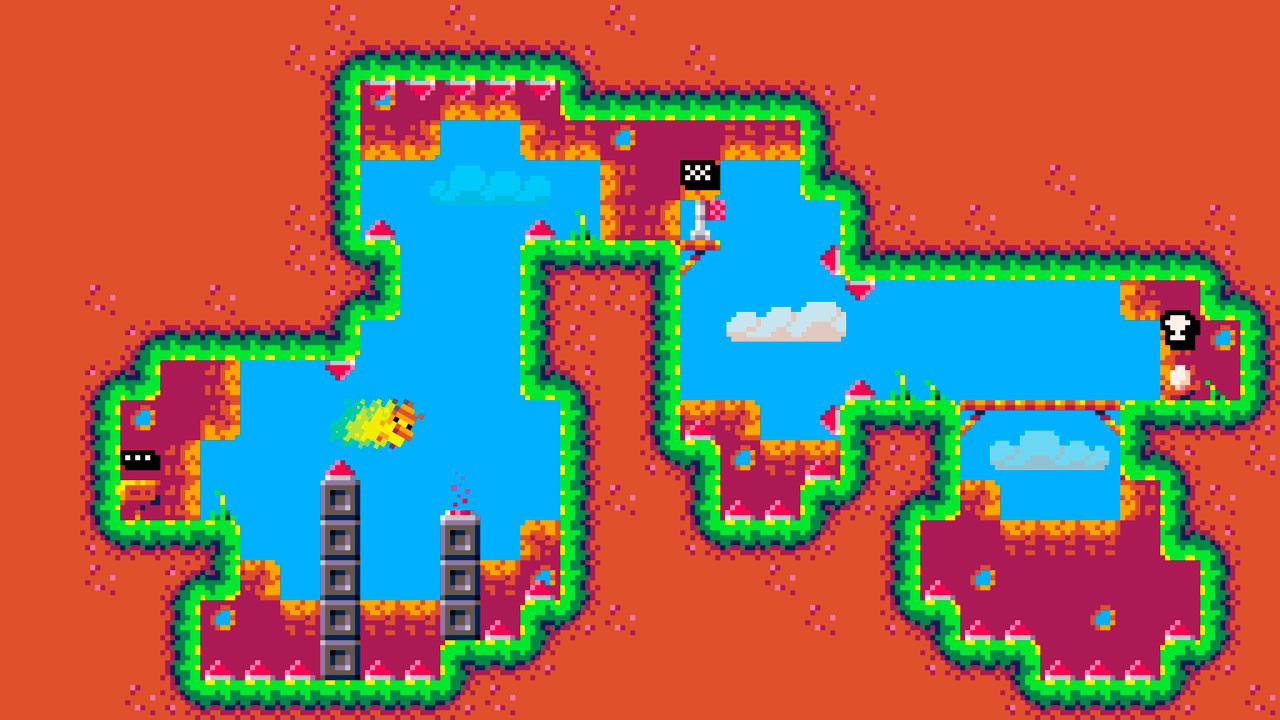 Against all sane and logical odds, I am still going to work. I say that because I do not feel like I have an essential job: I am not serving food, providing important goods or saving lives. My job is in an office, far away from hospitals or shelters, and my company still insists things are not bad enough that they can justify paying me for doing nothing. So I’m still riding the rail each day to work, and that’s my only real chance to play video games when it’s not the weekend. I’d love to say that I’m giving some of the games currently on my plate enough attention, but I’m really spreading myself thin in the evening, and look forward to the commute to be my moments of offline zen. So, to see a Ratalaika Game port onto the Switch, I know that it’ll be simple. It’ll be easy to consume. And It’ll be generally fun, if not entirely mind blowing. When I picked up Duck Souls+, which comes to us from Green Dinosaur Games (who has the cutest damn developer splash I’ve seen in a while), I didn’t know just how challenging it would be, but here we are, and I’m having a grand time.

The title of the game is meant to put you into a certain mindset, specifically about difficulty, and you mostly get that impression from the drop. For Duck Souls+, you play a duck, perhaps the last duck ever, who has been tasked by Ghost Duck Ancestors to save the duckling eggs and protect the future of the species. Like all grand quests designated by ghosts, they do bestow upon you a gift of sorts: the ability to dash. This dash ability is not present in any other duck in history (source: literally seeing a duck), and the Ancestors believe you will be able to use this, plus your natural duck abilities to jump and also do wall jumps (source: ????) to save all the duckling eggs across one hundred levels of spikes, missiles, fireballs and other traps. If you fail, it’s not that your goose is cooked: its that you’re royally ducked. 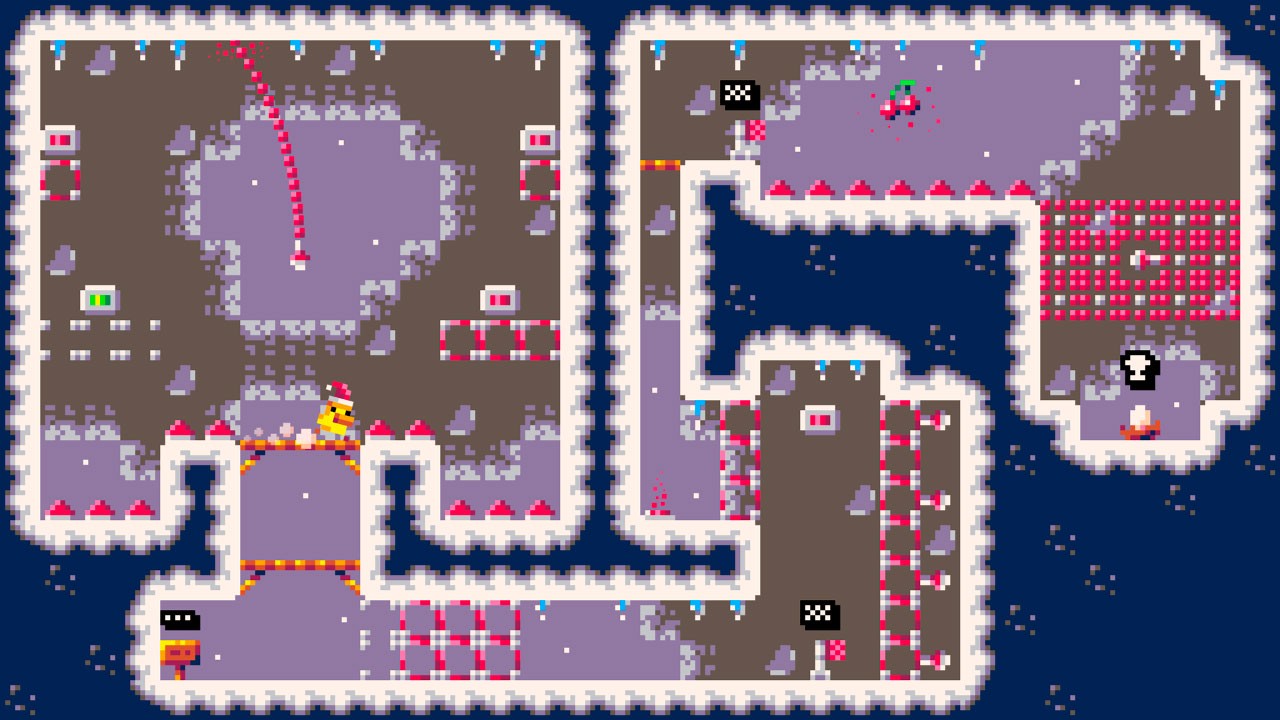 Duck Souls+ makes the objective of the game very simple: in each stage, you need to get to the other end of the stage and touch the egg to claim it and be victorious. That’s all. There’s no timer to speak of, and there is a death counter that means nothing. It’s there purely and simply to punish you and make you see how much you’ve died. You have the choice between either casual or hardcore modes, and the difference between the two is nearly invisible at first, but becomes essential alter on. See, in casual mode, the devs have set up checkpoint flags throughout the level that basically create save states after you clear a particular set of hurdles within a singular level. So, if you get passed the first two gauntlets of swinging hammers, you can restart from the beginning of the third if you die. In hardcore mode, these flags don’t exist, so you need to run your little duck friend all the way from start to finish without getting shot, stabbed, exploded, ignited, frozen or smooshed. If you decide you want to take things the hardcore way, I recommend doing that from the very beginning. You can change difficulties at any point from the main menu (stages that are unlocked remain unlocked for either difficulty), but it’s easier to think there are no checkpoints than to have them and suddenly not have them.

There’s a lot of things that I like about Duck Souls+, and I need to be honest: this is a game with very few flaws for what it sets out to do. The controls are very tight, and, in fact, a little too responsive. After you die, there’s a split second where you see the splash screen of the level but you can already control your duck, and that lead to, I’m not joking, about a hundred accidental deaths as I respawned and started moving before I could see myself and promptly got impaled. With no time limits and no penalties for excessive deaths, patience becomes a virtue to prevent yourself from unnecessary frustration. Once you get the hang of that, you realize that the pinpoint precision of handling your duck becomes paramount, especially as the game progresses further and things get real. First few stages: don’t fall on spikes, understand hitting switches, practice timing when outrunning timed turret shots and things like that. No problem, some deaths but nothing too outlandish. And then it straight up turns into Celeste.

Now, Duck Soul+ CLEARLY doesn’t have the narrative that Celeste had (nor does it even become remotely the same level of difficulty), but this little duckling game does take on the same idea of utilizing midair dashes  to hit switches and, after about level 30 something, actually having fruit that recharges your dashes in midair.This was clever: by using this familiar idea to help make more difficult levels, it immediately ramped up the difficulty perception in my mind and put me into a better mindset. Until this moment, I was sort of burning through the game with a very relaxed air. After all, the graphics are simple pixel art, cute but a little grainy, and the music is a very poppy but generic digital ambience. Visually and presentation wise, there’s nothing offensive or terrible about how the game is delivered and portrayed, but there also isn’t a lot that makes me gravitate towards it, especially not when Blazing Beaks blew me away with bird-themed games some time ago. Hell, if the title of this game wasn’t a pun, I probably wouldn’t have initially picked it up, so I was glad that the game decided to ratchet things up a notch by trying to imitate one of the greats. 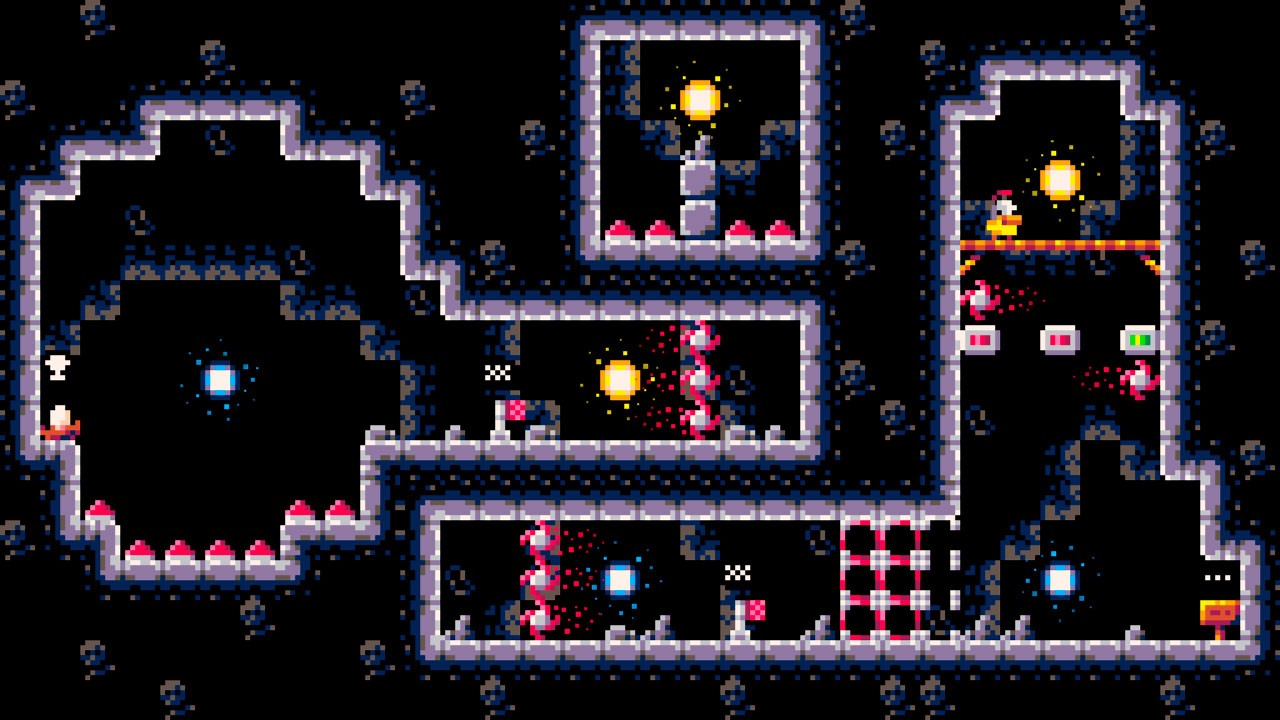 Sadly, the dash fruit isn’t a constant thing once it becomes introduced, which is a triple faceted issue for Duck Souls+. On the one hand, it does allow the game to move onto another mechanic to present (duck seeking missiles) and not just straight up turn into Celeste. On the other hand, it was sort of a relief because the levels are open to interpretation, which shows some of the flaws in Green Dinosaur Games’ design. About three of the fruit-dash levels can be solved without needing to pick up the fruit, which sort of defeats the purpose. If you remember you can wall jump, a lot of corridors are narrow enough that the fruit is not needed, and just the regular dash, timing and patience is enough (though one level with three switches  in a row was justified and a straight up enjoyable burden). On the third hand, establishing the fruit and its purpose makes it more satisfying when elements of the game come back later but not constantly. You sometimes forget how things like disappearing platforms or the springboards affect gameplay, and dropping them in and out keep you on your toes and force you to recall strategy. There was one level that took over 20 deaths for me because you needed to understand the best way to move across those vanishing platforms while a missile was heading for your duck. It was frustrating, but in a way that let me know “it’s not the game, you just suck right now.”

That’s what the big success and takeaway from Duck Souls+ was for me. It’s hard, but it’s not unfair, and you get better as the game goes on. It’s shockingly well constructed for this price point, you get a good amount of replay value, and there’s actually incentive to play through on the Hardcore difficulty once you master the Casual. You need to know and show that you’ve learned something and can benefit from that knowledge. Not only do you understand how the game and the traps work, but you know the timing and the situations for when you need to adjust, pivot, change direction and straight up dive for cover before you end up dead. No, it’s not as hard as some of the platformers I’ve played and reviewed before, but maybe I really like that right now because I don’t have the time to focus on just this one game for more than a snapshot of my morning. I enjoy it, I recommend it, and I would come back to it in a heartbeat if there were more levels added. Can’t really give it higher praise than that: I remember this game.

No joke: this game is legitimately hard, fun, and you never cry fowl.