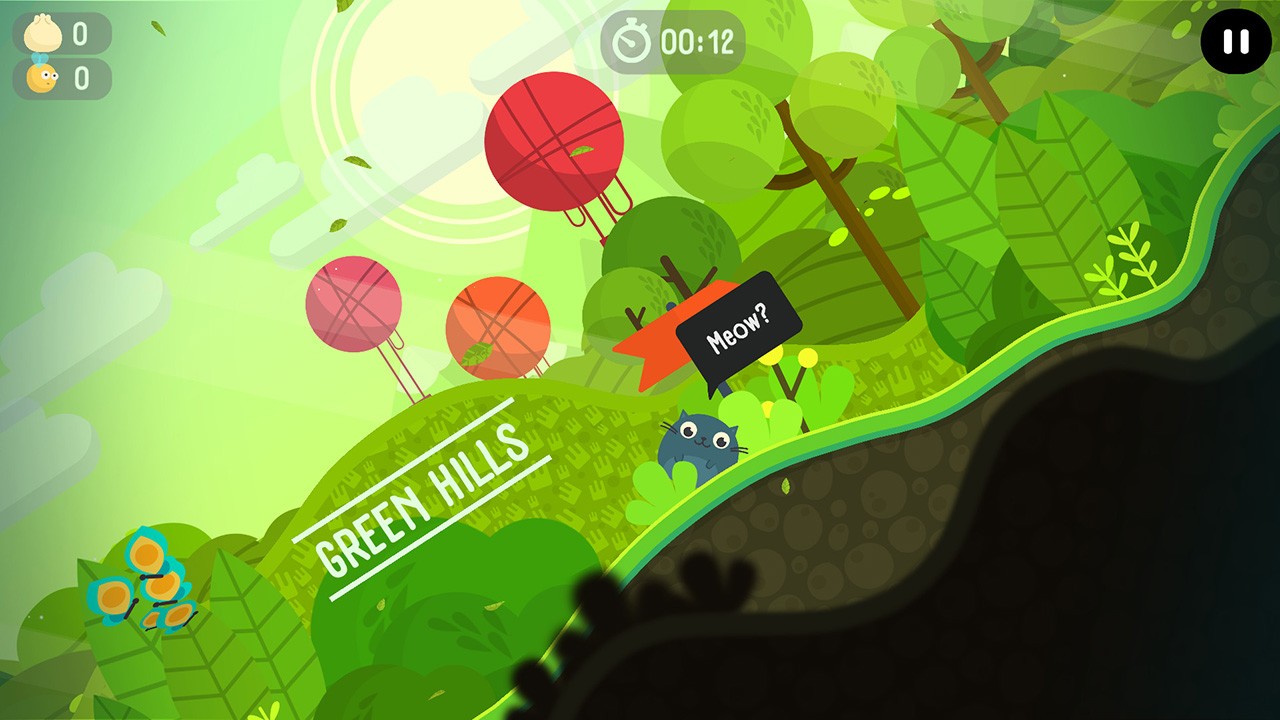 With the bright colours and child-like graphics, The Big Journey will appeal to a particular market. I won’t define that exact market in fear of putting people into a box, but I wanted to give it a try as it reminded me of a game I used to play back in the days of the original PSP: LocoRoco.

If you haven’t played or heard of the latter, LocoRoco was a weird fusion of your character saving nature. Everything was harmonious, vivid and… cute. It also had an irritating but catchy soundtrack and a control system where you could rotate the screen with the shoulder buttons to move your character. Well, The Big Journey is a clone of this, though doesn’t take it any further and perhaps represents a lighter version. 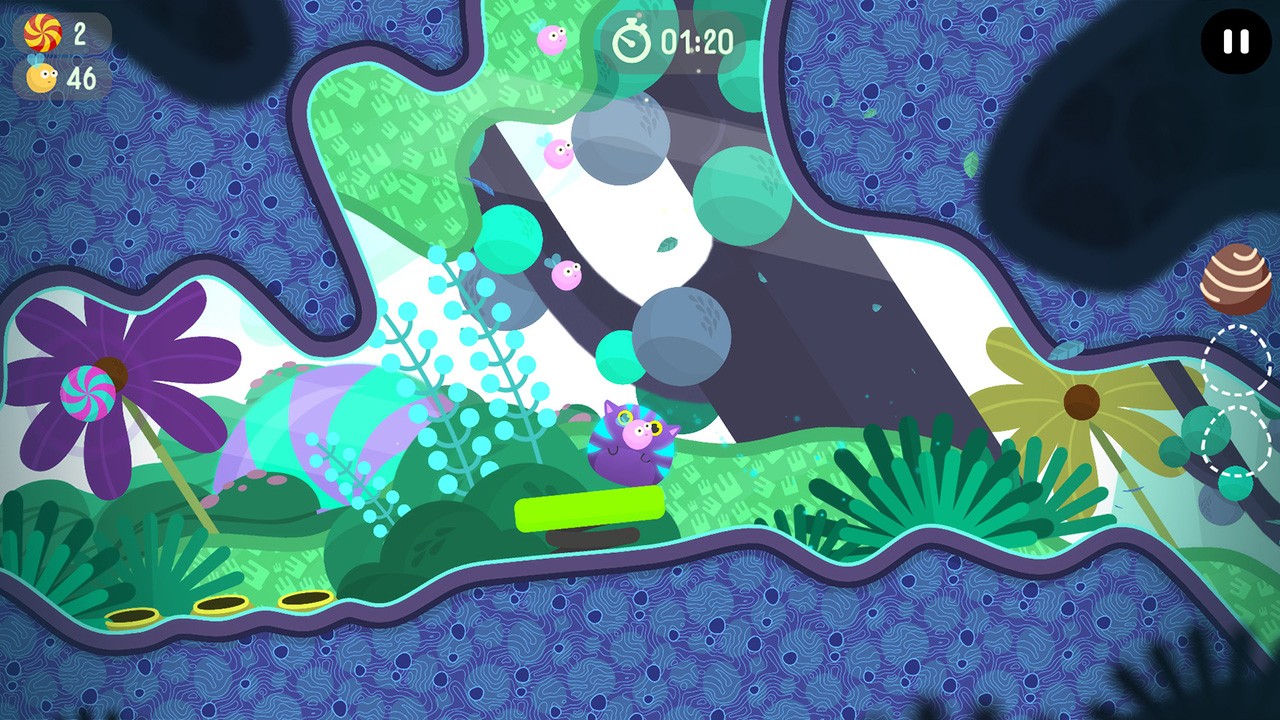 First of all, the characters are more relatable in The Big Journey as they are anthropomorphic animals. The title character is a fat cat named Mr Whiskers. His back story is… he’s a lover of dumplings, but the chef who makes them has gone missing and Mr Whiskers’ goal is to rescue him: to eat more dumplings. I suppose he’s a more mobile Garfield. Along the way, he’ll meet with other animals who give him dietary advice, ensuring that he gets a balanced diet other than dumplings. It’s peripheral really, and you can plough through The Big Journey with little challenge. You roll through each level collecting the dumplings, bugs and avoiding most enemies.

The controls are simple: the shoulder buttons tilt the screen, and with either B or A you can make Mr Whiskers jump. Mr Whiskers doesn’t walk anywhere – he rolls – hence the nature of the tilt buttons. Tilt one side to move forward, another to drop down a tunnel. There’s no learning curve as it’s easy to pick up and play. It doesn’t discriminate in terms of accessibility – anyone can pick up and play this more or less, so a good title for entertaining a young family or for casual gamers. There are challenges within each level, but they don’t exert your patience and are entirely achievable. This can be a good or bad thing, but I think for the style of play and presentation, it’s ideal for a younger audience.

A note on visuals – they’re charming. The main characters are cute and well designed for the type of game. As for the levels, these are also well presented both in structure and the aesthetics – including the backgrounds. It was a little too cute for me, however, and while I can’t knock the visual approach, it’s not my type of thing. As for the music, there are a few nods to the composer as being a somebody. Just before playing this, I saw a few comments on how good the soundtrack is. Regrettably, I have the misfortune(?) of playing LocoRoco many years before, and can’t help but compare. I much preferred that soundtrack. Sure it was irritating and not something you’d listen to separately, but it had a presence and suited the game. The music in The Big Journey is very subtle. A lot of the time, I didn’t notice it and feel it could and should have stood out a little more. While there are a fair variety of levels, The Big Journey gets a bit samey, so a more energetic score could have given this the spirit it needed. 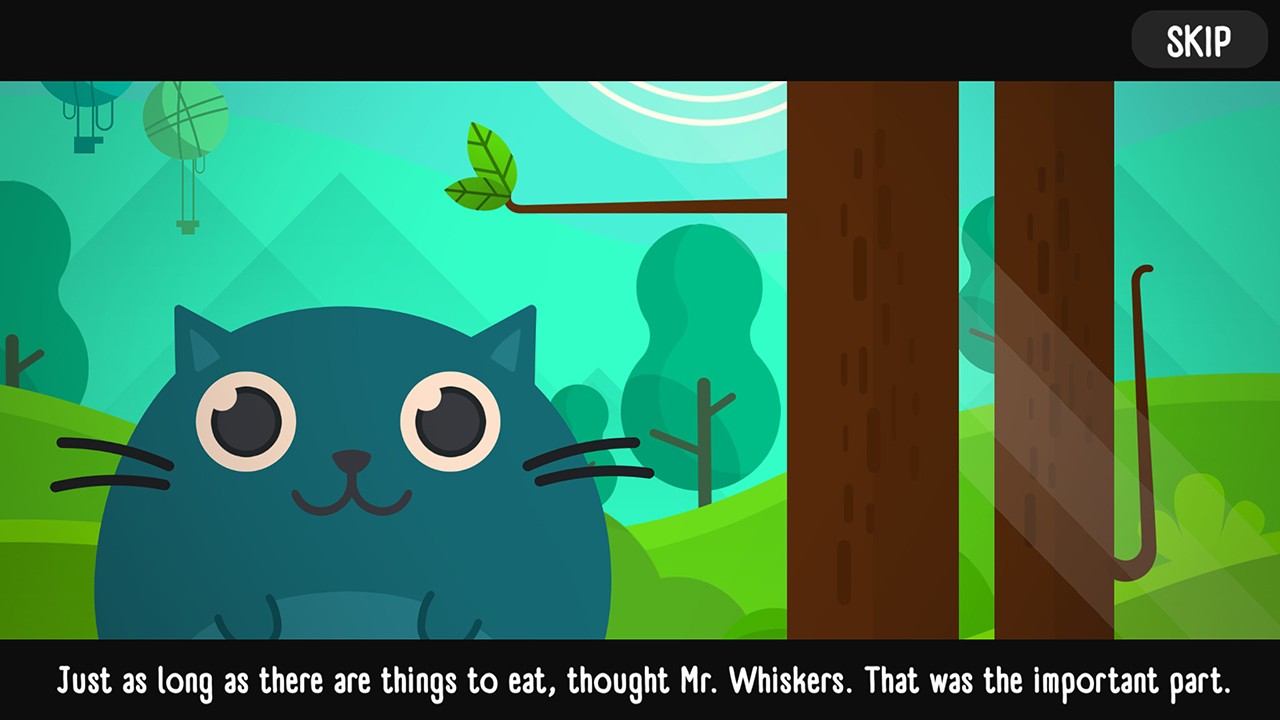 More importantly, it’s the gameplay. I seem to remember LocoRoco having full 360º leverage. The Big Journey feels like there is less autonomy to control Mr Whiskers. To prove a point, I looked up a playthrough of the former to refresh my memory and on reflection can see that The Big Journey is almost the same game, only arguably better visuals. Fundamentally though, the controls aren’t as good, and there aren’t any new mechanics that make this stand out. However, if you didn’t play LocoRoco the first time around, then The Big Journey might be worth a play, dependent on whether you like this sort of thing in the first place.

How long will this keep you or the kids occupied? Not that long, really. There are about 30 levels in all, and they are reasonable in length, but in summary, you should be able to complete this in a few days. You can steamroll (forgive the lazy attempt at a joke) through, and complete as fast as you can, but to unlock all the challenges will require a little more time. Besides, if The Big Journey does appeal to you, you’re going to want to savour it as long as possible (like Mr Whiskers and his dumplings), and it’s undoubtedly a pleasant environment to inhabit, but don’t mistake that in thinking it’s an open-world game. Apart from a few alternative routes, each level is pretty linear in that you have a starting point and goal you need to reach. Most of it involved rolling off ledges, squeezing through tunnels or getting a boost from the local vegetation to reach some otherwise unreachable platform.

A fun family game with nice visuals. The Big Journey is quite refreshing as it doesn’t have a difficulty setting but consistent and unlikely to put off younger gamers. Pending they get accustomed to the first couple of levels and the tilt controls.

The child-like approach won’t appeal to everyone
Not much of a challenge
Despite promoting the soundtrack, it was a little uninspiring