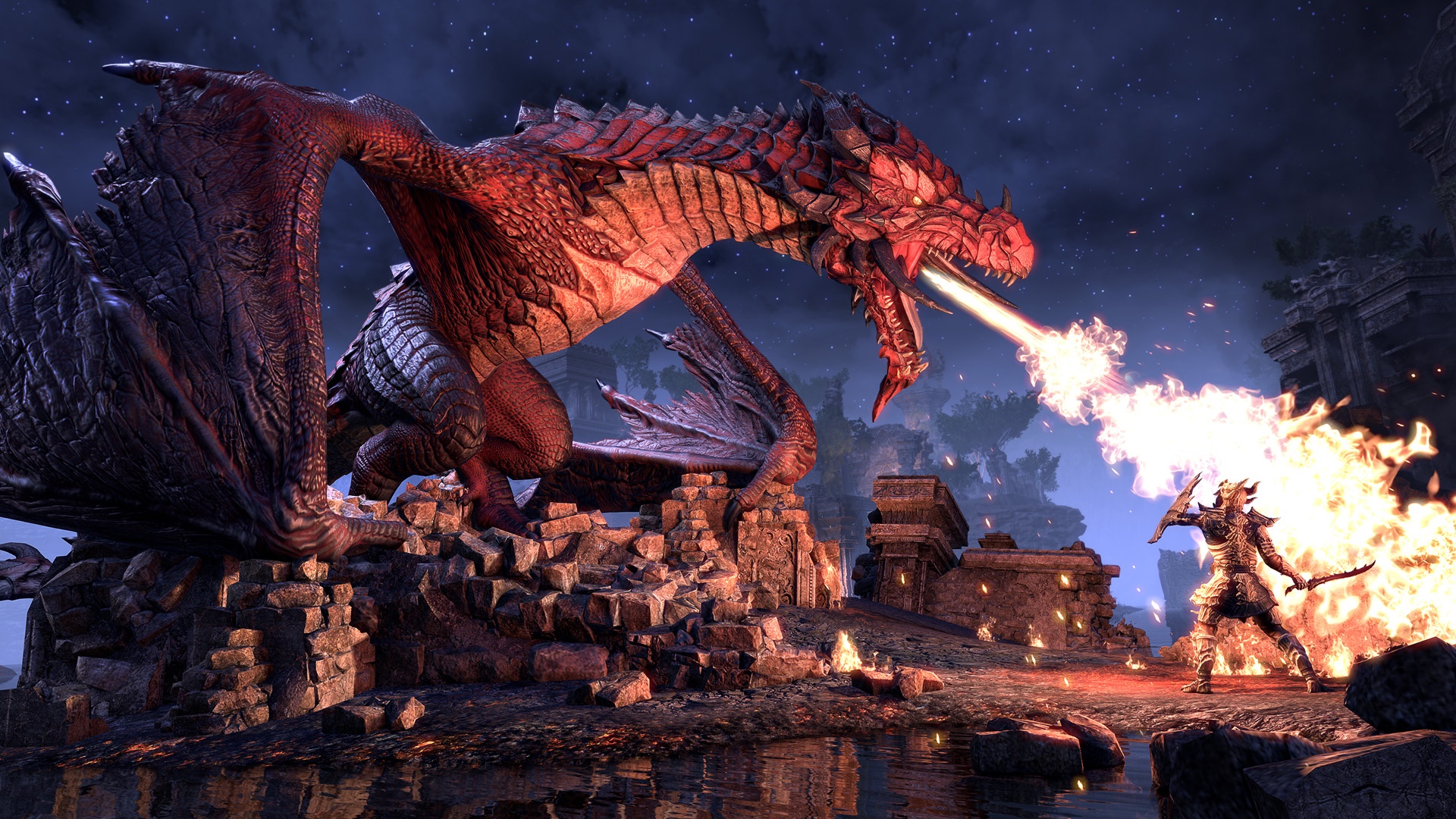 Just over a month ago, The Elder Scrolls online had been celebrating its fifth anniversary, as the grand Bethesda MMO has originally debuted all the way back in 2014. However the age of the title affects its appeal very little, as it has just became a home to a brand new expansion titled Elsweyr, which has developed this already gigantic MMO even further. It introduces new areas, main and auxiliary plot lines, characters, cosmetics and most importantly, brand new loot. Oh and before if forget, Elsweyr has also set in stone the race of Khajit, which were previously an afterthought and most importantly of all, it has brought Dragons in all their glory to the proceedings.

To most, the biggest selling point of the Elsweyr expansion will likely be the inclusion of the Khajit homeland, which encapsulates the expansive savannas, scorching hot deserts, winding canyons, ancient ruins and the most impressive of them all, the lively capital of the region; the city of Rimmen. While The Elder Scrolls Online may be an aging game, then the newly introduced areas are immensely impressive, as the attention to detail and the highly populated areas are truly a sight to behold and are an immense improvement, not just over the base game but also the DLCs and expansions which came before it.

Elsweyr owes all of its glory to the level and aesthetic design, rather than its visual fidelity, as the title’s age is clearly showing and sure, The Elder Scrolls Online is an MMO, so it will never look as good as corridor shooters or offline RPGs. But with the next generation slowly approaching, the title would need some sort of sprucing up, as the low polygon count of some models, blurry textures and washed-out colour pallet can all be a little jarring at times when scouring the lands of Elsweyr. 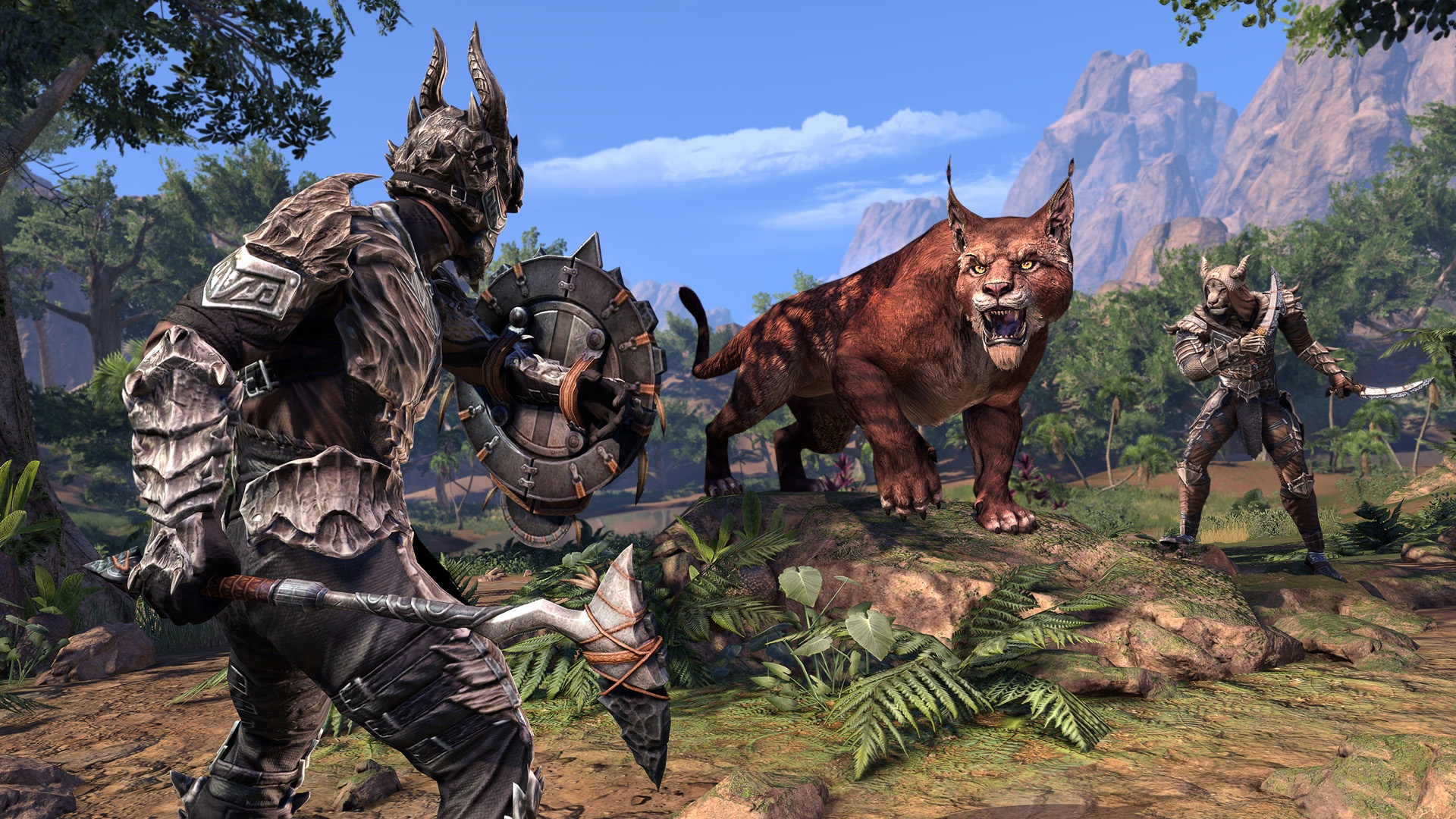 My biggest gripe with the standalone Elder Scrolls Online, or even the previous expansion, Summerset, was the fact that the in-game missions left a lot to be desired, as in their vast majority, they all usually boiled down to mundane fetch quests and uninviting hostile encounters. However, it seems like Bethesda was, and is, fully aware of its title’s underwhelming nature, as the core missions of Elsweyr are a tremendous improvement on what came before them. Even the very first mainline-mission is better than any that I’ve experienced before the release of the expansion and Elsweyr only grows from there. While I don’t want to spoil too much, I do have to underline that playing the detective in the opening hour of the expansion was immensely fun.

The lands of Khajit and most importantly, the dragons which occupy them have been the selling points of the Elsweyr since the first announcement. However, the expansion at hand also introduces a brand new necromancer class, which allows you to control an army of the undead. While magic and spells are not my thing, as I’m simply not a fan of any combat that doesn’t include a sword or an axe, then even I have to admit that watching necromancers in action is truly impressive, as the spectacle alone, which they create with their black magic, is simply enjoyable to watch. But what is even better, is that with the use of a spell called Living Death, necromancers can bring fallen players back to life. So while they can’t heal as proficiently as other spell casters, they can resurrect you whenever they desire, at very little – to no cost.

Just like the base game and the previous DLCs and expansions, Elsweyr scales with your character. This means that you can enjoy its contents whether you have just begun playing or whether you have already invested hundreds of hours into the game. This is especially great, when you consider the fact that you can play with your friends at will, regardless of the level gap between you and no, the scaling doesn’t work like in The Division, where you can play together but the power level 500 teammate is one shooting every enemy you come across. It scales in full, meaning that whether you are level 1 or 100, you deal an appropriate amount of damage and this keeps the game not just fun, but also considerably challenging, as it disallows you from being carried, or carrying others while skipping large parts of the expansion’s contents. 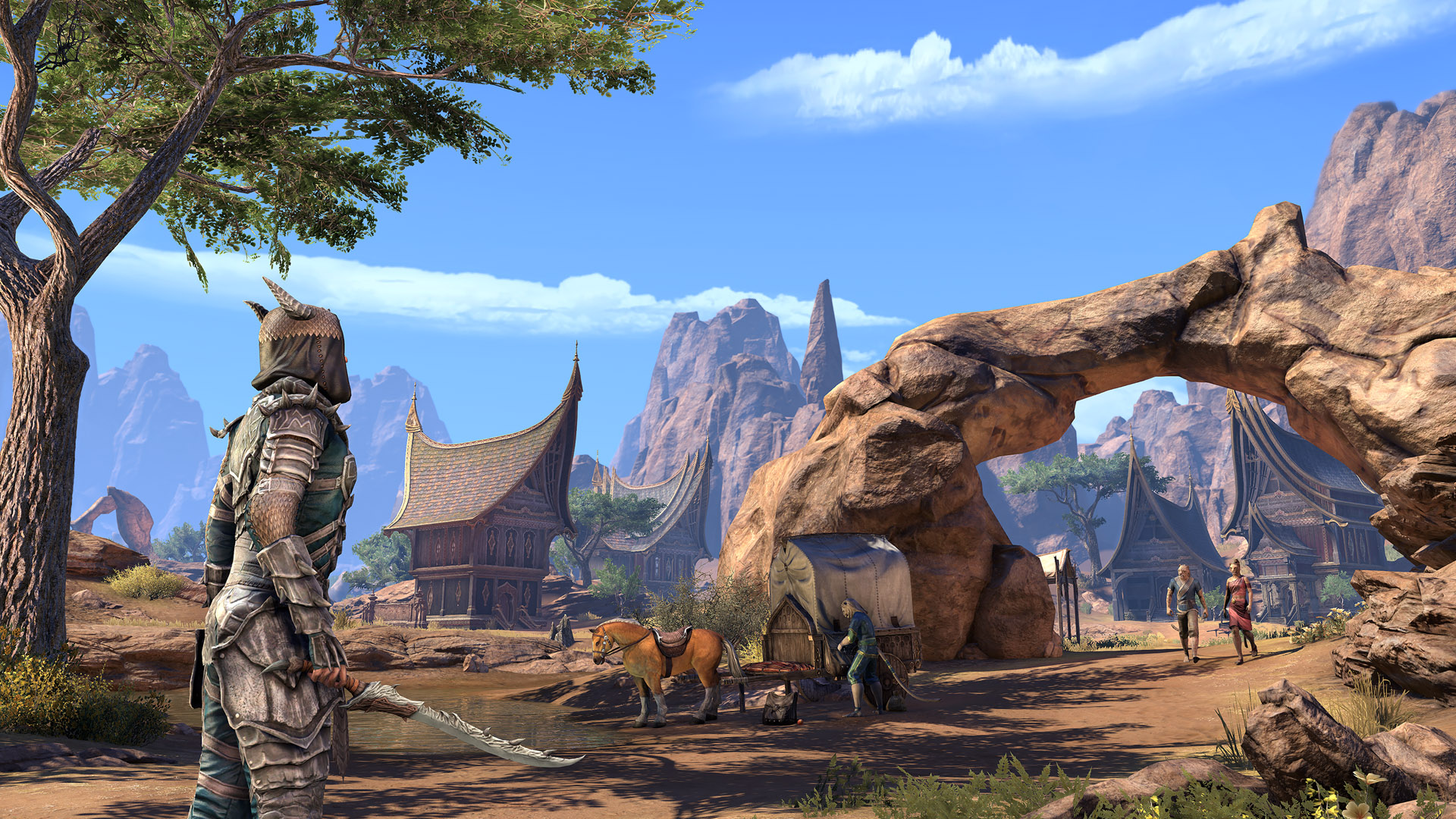 We’ve covered dragons, the rather impressive world design, the vastly improved missions, so it is time to slowly approach the end of this review and talk about what is most important to me and what I value the most in any RPG: The loot. Thankfully, such has been built upon, as the Khajit themed armour and weaponry is now some of the best in the game and the heavy armour set in particular, is the most impressive, as it allows you to dress as Iron Khajit; regardless of the race which you have chosen at the beginning of the game. The sheer quality and intricacy of Elsweyr’s loot design really puts the remainder of the in-game items to shame, as it is by far the most impressive and unique.

Sure, there are certain pieces of equipment in the base The Elder Scrolls experience, which can be seen as attractive or appealing, but such are incredibly difficult to acquire. Whereas, the loot of Elsweyr doesn’t take days, or even hours to get your hands on, but mere minutes and that is what makes it truly great. Thinking about it now, Elsweyr is the most welcoming and approachable expansion of them all, as it gives you a completely free reign over its contents and it doesn’t go out of its way to impede your progress, and most importantly the fun which you can have with it.

To summarize, all that has to be said about Elsweyr is that it is not just the best expansion for The Elder Scrolls Online, but is the best part of the entire experience. As at least for me, it tops all of the content which came before it. It delivers more and better content than the previous expansions, it expands significantly upon the prior established norms of the game, and best of all, it introduces some levels of complexity to the otherwise basic and straightforward game. What elevates it to the next level, is the fact that it’s a welcoming and approachable content pack, which does its best to serve you, the player, rather than its own needs and requirements. All in all, it quite literally serves you all of its content on a silver platter.

Elsweyr is the most satisfying and welcoming expansion to date, and the perfect entry point for new and unexperienced players.