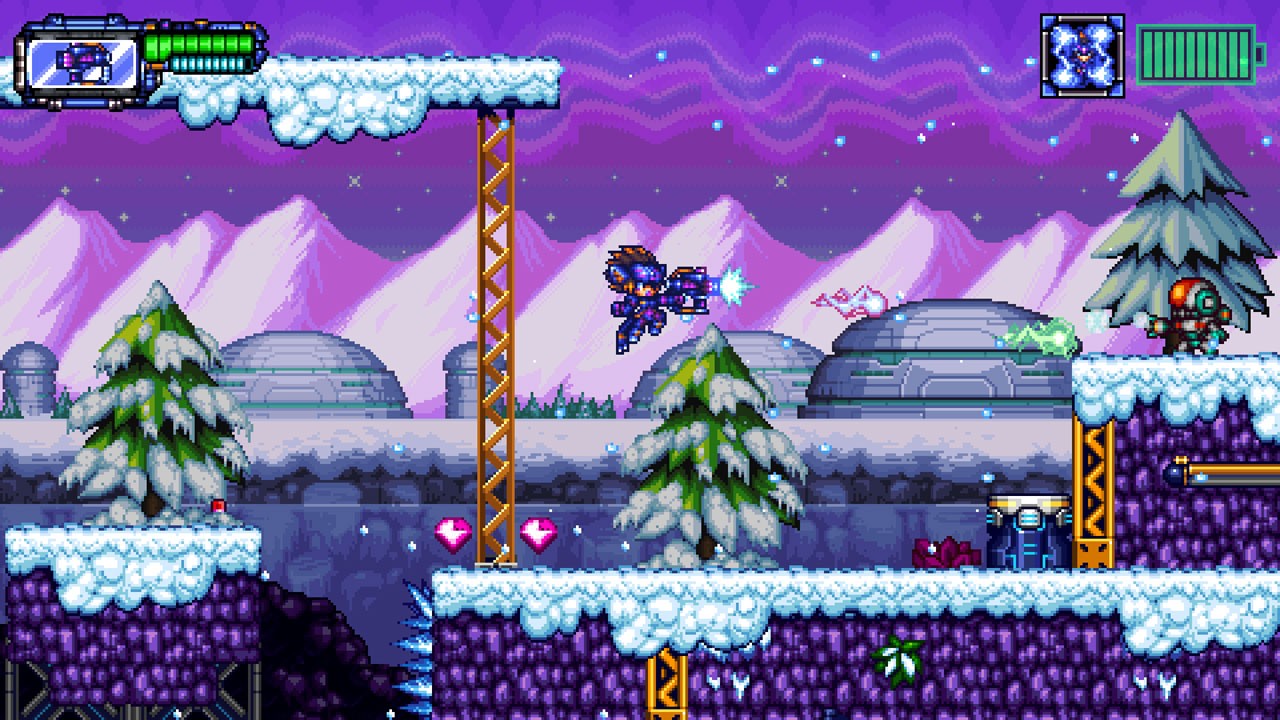 Metaloid: Origin is a MegaMan-ish action platform game with a few aspects and better developers design choices that are more user-friendly and make its own personality.

In Metaloid, we’re given the option to choose between three different female android characters, classified as predators. Each one has unique perks loadout and special elemental skills, however, all of them use the same dash ability that can be used by just holding a button – which works much more like a sprint skill. Every single girl uses a pistol instead of a buster, just like Zero at MegaMan Zero games. Erika’s ability are fire-based, Zeta has the power of lightning elements, and Neva is armed with her big laser gun to destroy enemies.

You should save their planet from the army of Lucian Corp., who invaded the planet and took resources to fuel their galactic war efforts – not so original. You can add new abilities and perks when you make some progress on campaign and earn some credits specific quantity, giving the player a way wider gameplay style plus advantages against threats found on stages. 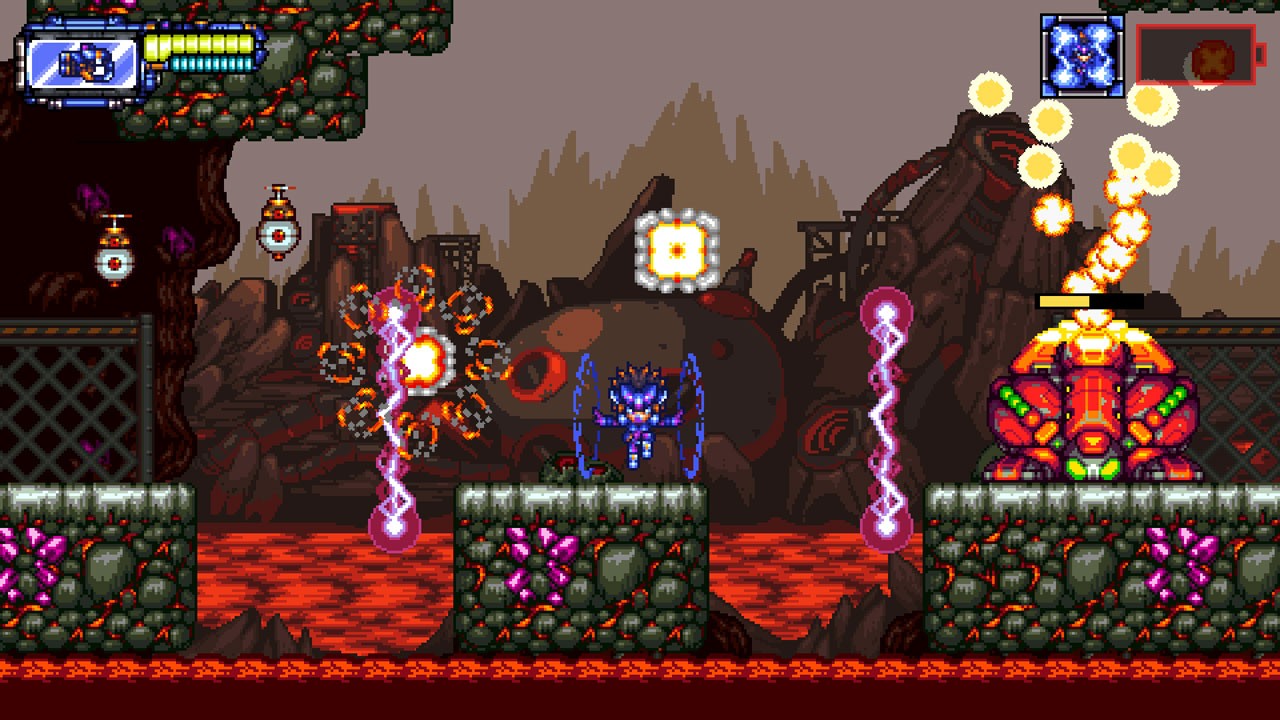 At the very start, the game introduces a stage selector, where it’s possible to choose a scenario with a respective boss fight, also read some written text containing an overview of story and objective before getting into the action. Unlike MegaMan games, it isn’t possible to select any preferred initial stage, being necessary to start from the first one and proceed sequentially, taking the possibility of choice from player’s hands. Also, you can’t get the ability that bosses use at their battles, so you need to upgrade your abilities in order to get new guns and new types of shoots.

The stage structure is very familiar to the Capcom Blue Maverick Hunter’s game, where it’s needed to pass through enemies, minor puzzles, action platform challenges, a miniboss, and finally, to fight the final boss of that stage. Apart from that, Metaloid: Origin has some elements that make it far better than MegaMan games.

First of all, there are pink gems named CR (or Soulrium, according to the story) in every single stage – the biggest addition between MegaMan similar products, in my opinion -, which can be collected and used for future upgrades at your character and some stuff else. There’s no game over due to the deaths quantity, but you can buy “continues” just using your gems stored during the stages, making everything much easier to deal with, since you can infinitely keep getting back again and again – assuming you have enough gems.

Metaloid: Origin also encourages the exploration factor through levels that give you a sense of freedom, where you’re rewarded finding a huge quantity of gems and health bars. When it comes to difficulty, Metaloid: Origin is quite accessible, being a game that can be indicated to many player’s skill levels. 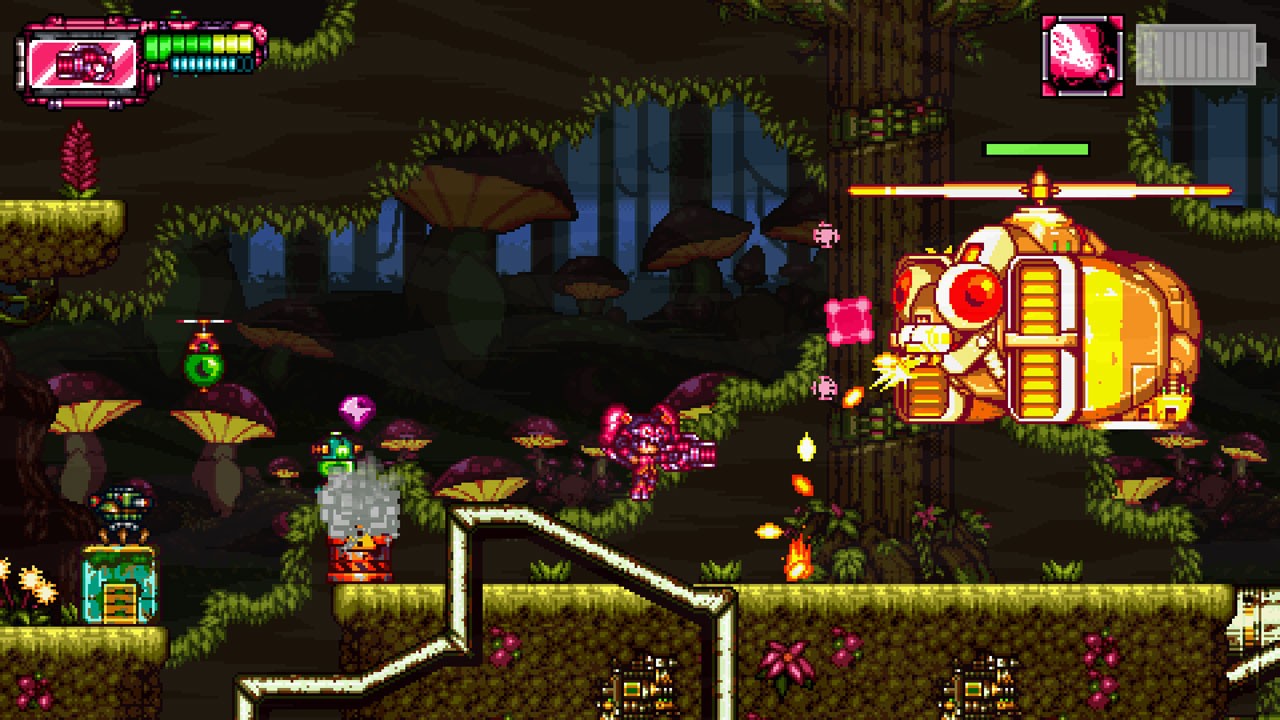 Even though Metaloid: Origin has a lot of cool ideas that improve the general gameplay compared to MegaMan games, it commits some noticeable flaws. First of all, the level design is pretty confusing, which you cannot exactly tell the difference between foreground and objects you can collide with in some moments. The stage lengths are kind of big and it’s common to get tired of them very soon because you keep seeing the same elements over and over again.

There are some awkwardly glitchy upgrades, as the air dash, for example. You keep bouncing at the end of this ability animation, even if the surface is climbable like the ladders – clearly an issue -, and I caught myself dropping several times because of that.

Despite those silly flaws, Metaloid: Origin totally worths your time, even more, because it has a lot of replay factor, since you got three different characters, although with little variety in gameplay. The game makes a great tribute to Capcom’s franchise, getting its own identity with somewhat different progression. So, if you’re a fan of the 16bit style MegaMan’s era, go for it! It’s better than Mighty No. 9, I promise – sorry, I couldn’t hold myself back.

Metaloid: Origin is a great MegaMan similar game with a lot of stuff that make it unique.