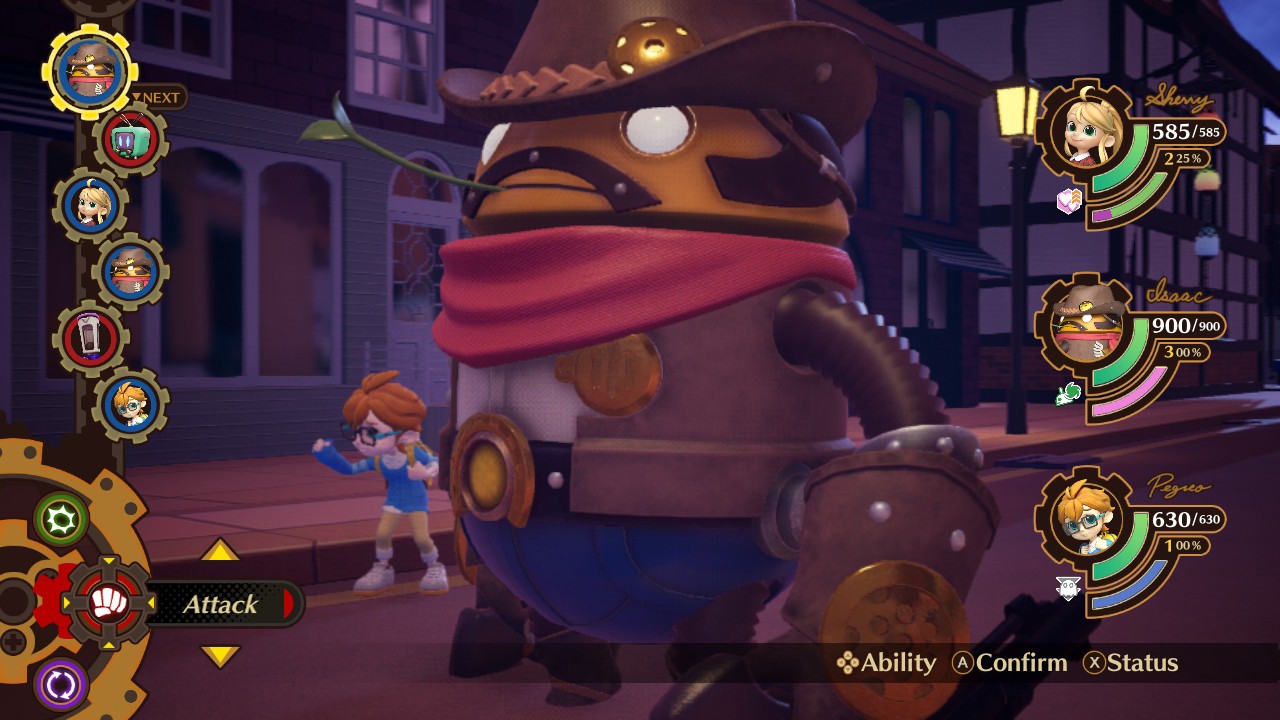 Destiny Connect: Tick-Tock Travelers is the latest game from Nippon Ichi Software, and was both developed and published by them. This is the first game to be developed and not just published by them in a while, and it’s an interesting title that stands apart from their other recent efforts. Destiny Connect: Tick-Tock Travellers is a traditional turn based JRPG featuring a story involving time travelling, destiny, and soul absorbing machines.

Destiny Connect’s story follows a young girl called Cherry. She lives in a small, peaceful town called Clocknee with her parents, but when the festival to celebrate the start of a new millennium begins, the town’s machines go haywire and suddenly attack. Not only that, but time itself comes to a grinding halt, with only a handful of people still able to move. Fleeing back to her house, she finds Isaac, a robot hidden away in her father’s lab. Programmed to protect her, he becomes a valuable ally who helps her fight back, alongside her friend Pegreo. During her journey to save her town, Sherry will meet a cast of colourful characters, fight a horde of sentient machines, and even travel through time. Conveniently, Isaac also happens to be a walking time machine.

Destiny Connect’s battle system is a traditional turn based affair, the kind we’ve been seeing since the early days of video games. Characters take turns using attacks or skills, with the turn order being determined by their speed stat. Each character has a reasonably varied set of skills, each of which consumes a certain amount of their SP gauge. The SP gauge fills up over time as characters attack and take damage. It fills up fairly quickly, so you’ll be using skills a lot. Some attacks and skills have elemental properties, which can be used to exploit the weaknesses that most enemies have. As you’d expect, hitting an enemy with the element they’re weak to will deal extra damage to them.

Destiny Connect features some interesting enemy designs, with all of them being based on machines and household appliances. There’s many types, including evil irons, hairdryers, flying toasters, and a crazed washing machine. The enemy names tend to be based on puns, like the fan enemies being called Fan-tastic, or the toaster enemies being called Testoasterone. There’s a lot of this. Some of the puns are kinda funny, while others fall a bit flat. Either way, it’s clear that the localisation team were trying to keep things interesting, which isn’t a bad thing. Sadly, it doesn’t take long for the enemies to start getting reused, with just their names and colours being changed. This isn’t an uncommon thing in lengthy JRPGs, but the short time in which it begins to happen in Destiny Connect shows how few enemy types it actually has. 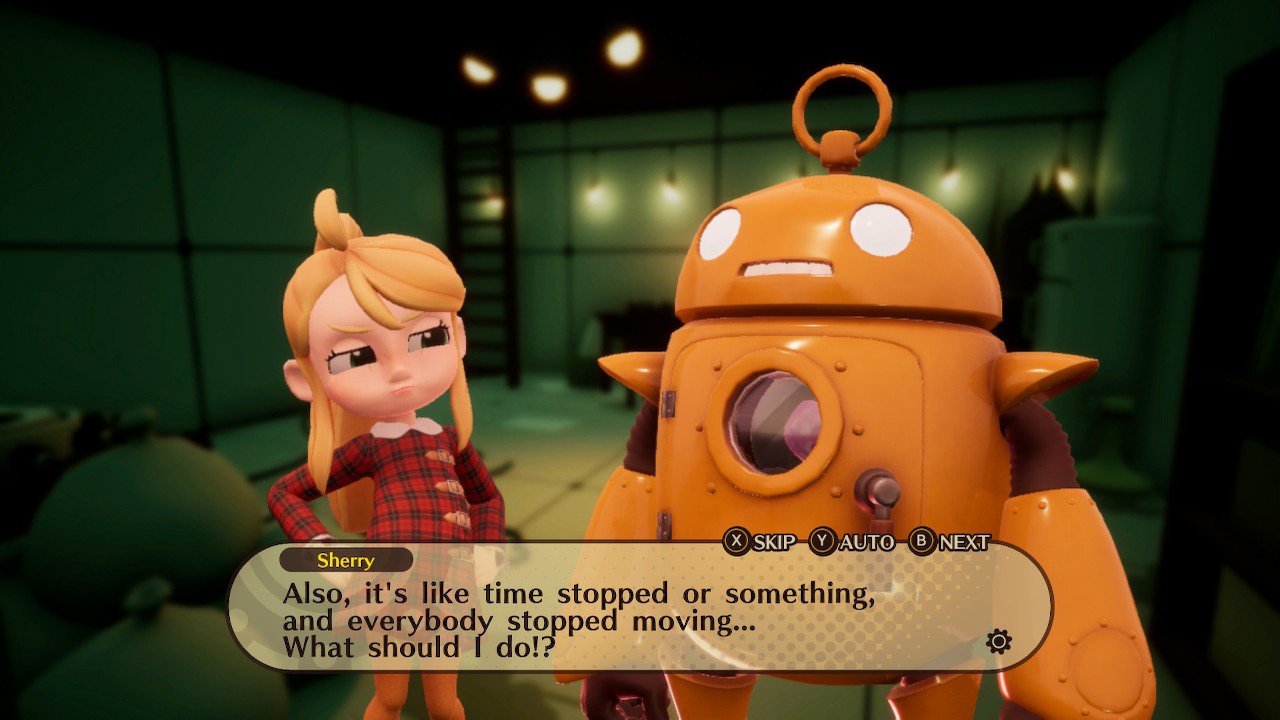 Isaac is easily the most versatile party member, being able to change forms at will and gaining access to a new set of skills with each one. He can be an attacker, a defender, a support unit, etc. Each of these forms has a unique design, and they’re all detailed and interesting to look at. That said, I rarely felt the need to switch him from his default form since it alone has a very strong range of skills. These skills even include a frankly overpowered attack that deals solid damage and also has a good chance of stunning the enemy. Considering that no enemy or boss in the game is immune to stun (I used it on everything), and that being stunned causes them to not be able to move on their next turn, it quickly becomes clear that this is the best move in the game.

Destiny Connect is one of the easier JRPGs on the market. While enemies deal a reasonable amount of damage to your party members, this is almost completely negated by the fact that money and healing items are abundant, and that Sherry has a powerful healing skill that can be used often. As such, Destiny Connect would actually make a good first JRPG for those new to the genre and who want to ease themselves into this type of game while learning the mechanics.

Destiny Connect unfortunately has some issues with its game design. There are simply too many enemies in some areas, especially late in the game. Some of the game’s areas can be quite narrow in parts, which means that it’s basically impossible to dodge the enemies. Despite that, I still found myself avoiding as many enemies as possible during the late stages of the game, there’s really no need to fight them since the fights are so easy and they just slow down your progression overall. There can also be some awkward camera angles in some of the smaller environments, such as Sherry’s house. Fortunately, this issue only pops up rarely.

Destiny Connect was created using Unreal Engine 4. Frame rate is stable most of the time, and the graphics are quite smooth. The game has a rather cartoony look overall, with low detail character models. It’s not a bad style, but it does tend to look a little rough in places. Destiny Connect features a limited selection of music, but what’s there is very good. The battle theme, which you’ll be hearing a lot, is suitably fast paced and uses an interesting combination of instruments that helps to keep it from getting too repetitive. Surprisingly, the game has no voice acting at all. Some might say that it adds to the game’s retro feel, but it’s honestly a bit disappointing. It really could have added some extra impact to the story, especially during the more emotional scenes. Destiny Connect allows you to save anywhere, which is very convenient and also works well with the Switch’s portability. The game looks good and plays smoothly in both docked and undocked mode. 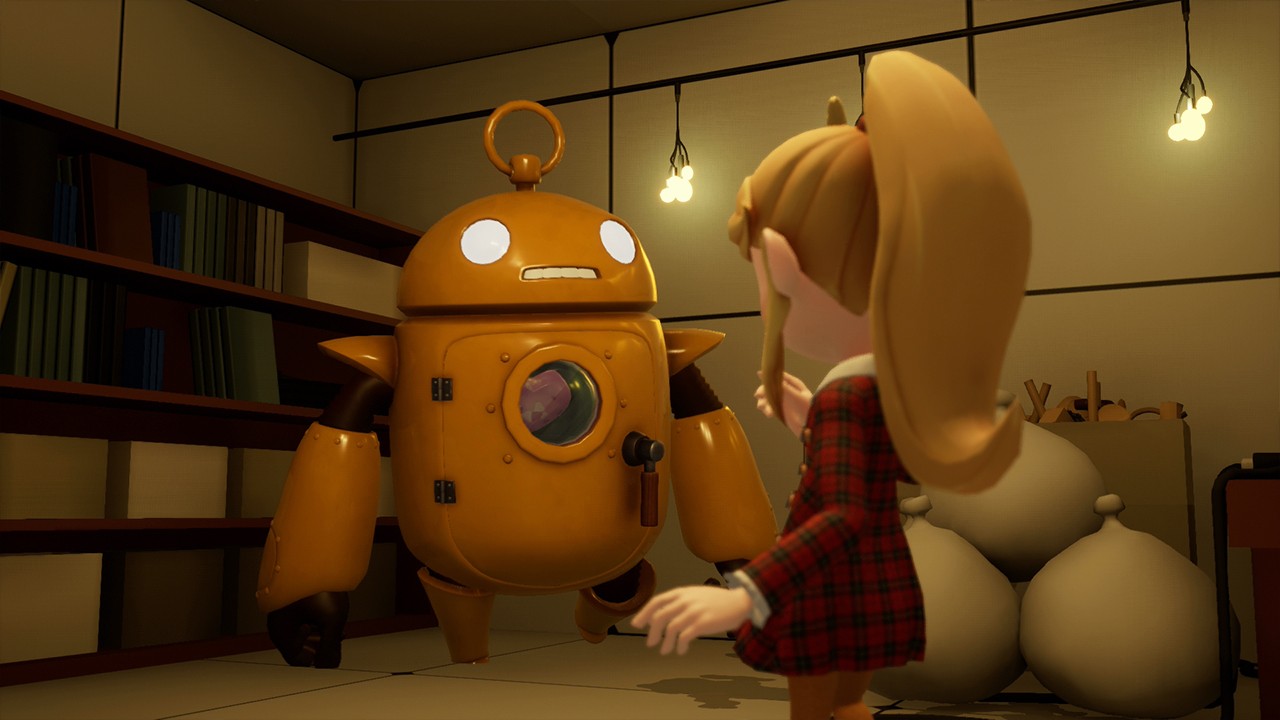 Destiny Connect has a 22 hour length. That’s how long it takes to complete the story, that’s all there is since the game lacks any kind of side quests. During my playthrough of the game, I ended up hitting the max level without trying, which is saying something considering that I was avoiding most enemies during the late stages of the game. There’s no post game content, which is a little unfortunate.

Overall, Destiny Connect is a good JRPG with a few flaws. Destiny Connect is a quirky game that tries to stand out with its stylised graphics and old school feel. The turn based battle mechanics are solid, and while the story ends up being fairly simple, it’s still enjoyable enough to keep you going through to the end. Traditional turn based RPGs have become something of a rarity these days, having mostly given way to action RPGs, so Destiny Connect stands out in this way. It serves as a nice throwback to the games that many of us played in our youth, but due to its low difficulty, it’s a fairly casual experience. Destiny Connect is a game that I’d really only recommend to people who aren’t concerned about a game challenging them and who simply want to cruise through and enjoy the story. The game loses a few points for its game design issues, but there’s definitely a niche audience for it, and the game makes a welcome change compared to what we’ve seen Nippon Ichi Software release in recent times.

Destiny Connect is a quirky game that tries to stand out with its stylised graphics and old school feel.