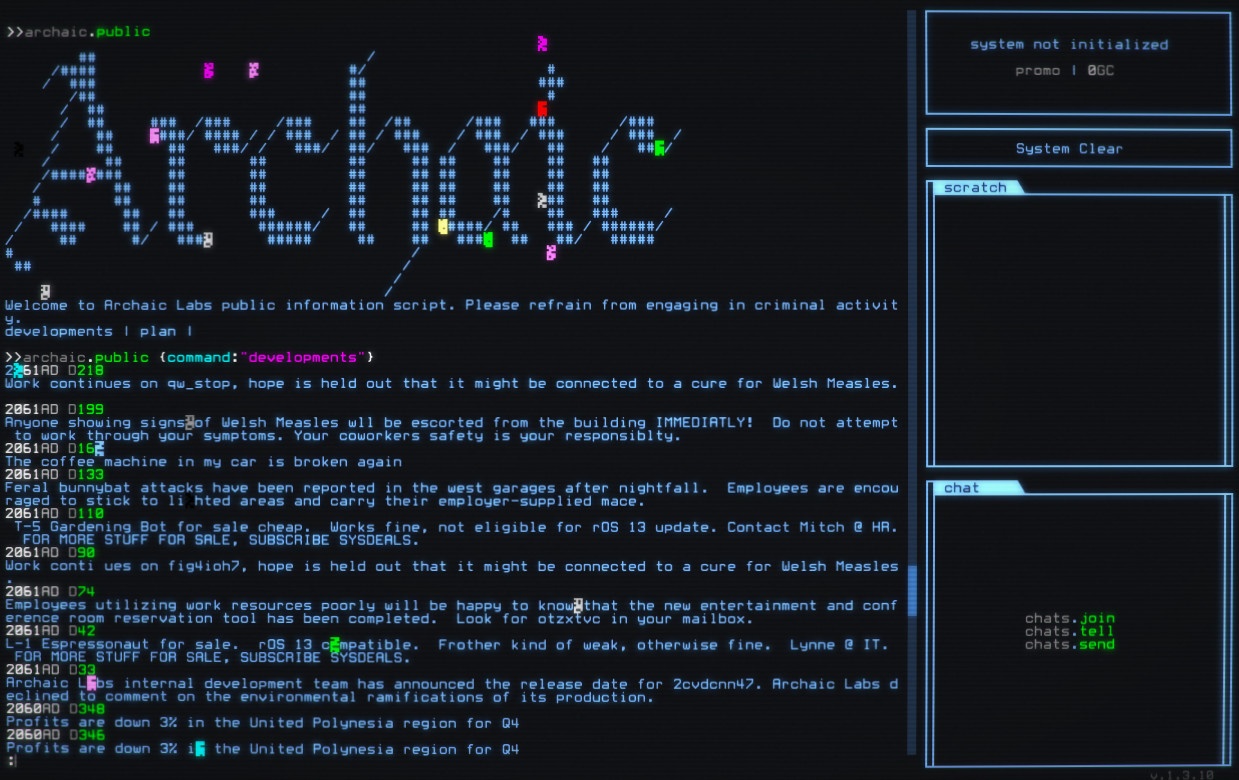 Creating a game with a good, and interesting, hacking system for a gameplay feature isn’t always easy to accomplish. However, creating a game that is fully centered around hacking, especially on an MMO level, is almost unheard of, but hackmud has managed to succeed in being the first of its kind. Hackmud is a hacking based text scrolling MMO game developed by Drizzly Bear in which the name of the game is to hack, explore, ally, and betray all others you meet in the game.

Taking the role of an AI program that finds itself in a vLAN, you take part in a four-hour tutorial before finding yourself in the main server of the game. In this place, all the other AI’s are controlled by various real time players who each have their own objectives. From there, your goal is to gather currency by exploring dead scripts, hacking accounts, finding allies you can trust, upgrade your systems, and maybe even cause a betrayal or two… while finding yourself also betrayed. There is a growing mystery as to what happened to humanity that either hints to it being wiped out or having left the planet due to a disaster, leaving their technology and AI’s to wonder in cyberspace. Discovering the mystery, while not a prime objective of the game, can be found by accessing dead websites and accounts you and other players can explore and hack.

In terms of artwork, hackmud is a very simple one that represents a 90’s style hacking GUI you would normally see in a Hollywood movie. You have your basic screen to type in code and messages, a window called “scratch” where you can paste important codes, passwords, and scripts, and a chat menu that records your conversations with NPC’s and players. When hacking, your screen will turn red with a counter to let you know how long you have until the server kicks you out. This helps build up the tension and pressure for you to hack as fast as you can. While the game isn’t very art heavy, it is interesting to see all the amount of code that builds up as time goes on, allowing you to feel like you are a real hacker. 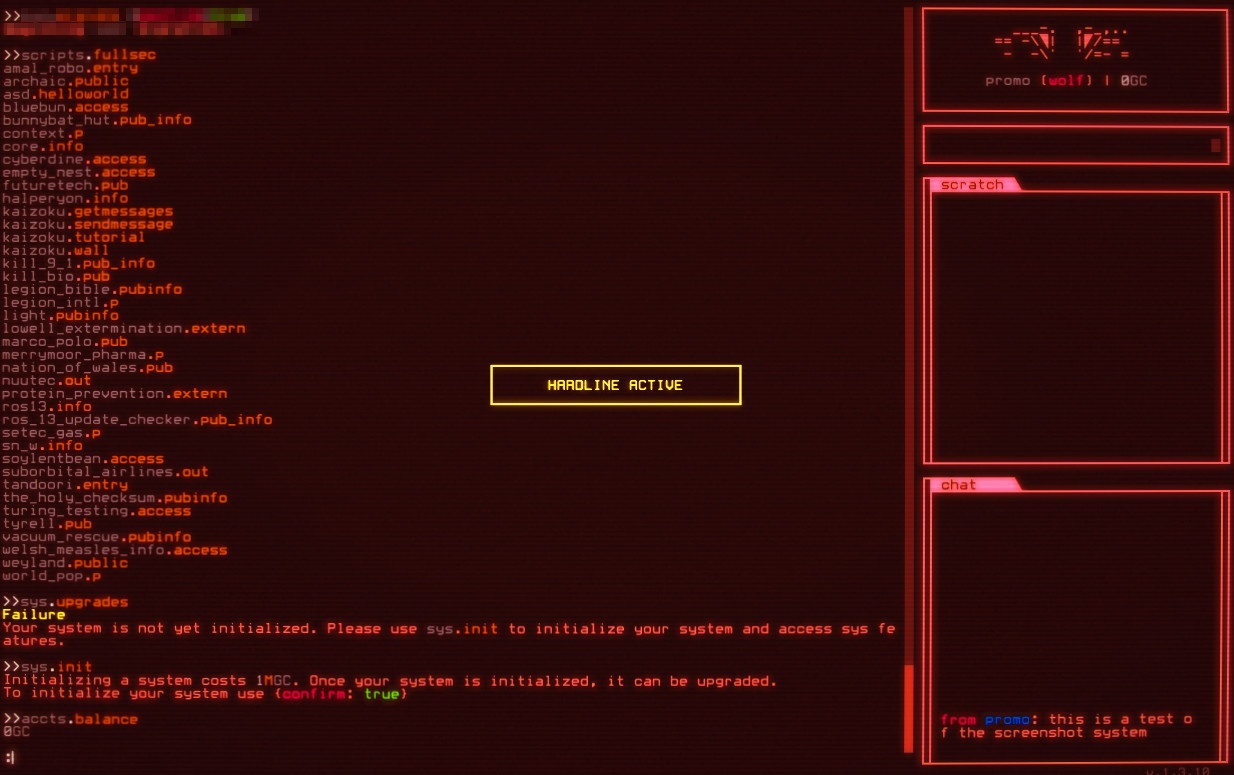 The game’s strongest part is its gameplay, which mainly consists of one thing: programming. If you are a programmer, or someone who knows basic JavaScript, you will find yourself quickly learning the ropes of the game and mastering its basic concept. Thankfully, regardless of your skill level as a coder, you will be helped by a four-hour tutorial upon starting the game. The tutorial follows a pretty simple story line of you, and other NPC controlled AI’s, try to find your way out of vLAN and into the main server. The tutorial teaches you everything there is to know about the basics of the game, and how to code in the game’s system. At the end, you’ll find yourself in the main server and from there the direction of where to go is up to you.

The main point of the game is to earn currency, upgrade, and earn more with those upgrades while exploring various scripts created by both the game and other players. Interaction with other gamers is highly recommended and you cannot advance at a quick enough pace without doing so. You’ll team up with other players, find and hack accounts, explore hidden treasures in long dead websites and emails, share information, and even create alliances to form a team. However, you must always be on guard because just as you will have friends, you will have enemies. Some of those enemies will turn out to be your friends.

Betrayal is highly expected in the game and you are expected to betray others as well. Everyone in for themselves, and everyone has two different user names that they can switch at any time. One can be the nice ally you care about as a brother, but at the same time his other account is the evil hacker who takes your money when you aren’t looking. You’ll have to judge who is playing nice and who is playing naughty to your own degree, while also setting up chances to betray those who trust you. 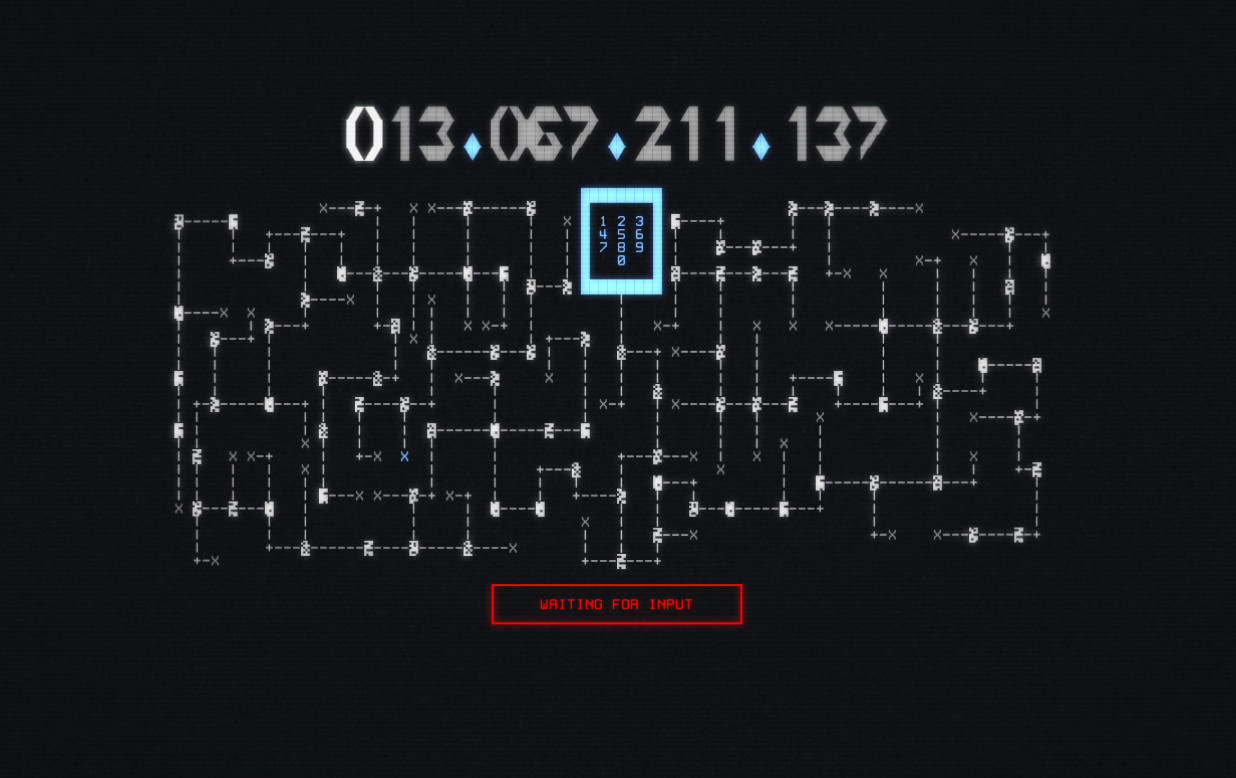 Naturally, since the game is focused on programming and hacking, you can create your own scripts, programs, and websites as well. Unique programs are always a needed edge in the fight to stay dominate in cyberspace, and you’ll find yourself dealing with a lot of advance programmers who know JavaScript very well. As such, this game is not for everyone as it requires patience, mathematics, logic, understanding of code, and lots of good programming skills. Because of this, hackmud limits itself to a certain audience who can truly explore and love this game. Those who want to get better will spend hours, if not days, learning to master their programming skills just to keep up.

Much of this game is very similar to EVE Online, and if you like the concept of that game, combined with the gameplay of hacking and programming, you’ll find yourself addicted to hackmud. It’s got a great concept that gives players a chance to create their own hacker empire in a system that encourages you to be the double-crossing traitor in a web of deception and secrets. However, because this game is specifically designed to a specific audience, the score goes down a little, but not enough to stop it from being a great game. Because of this, I give kackmud a 7 out of 10.