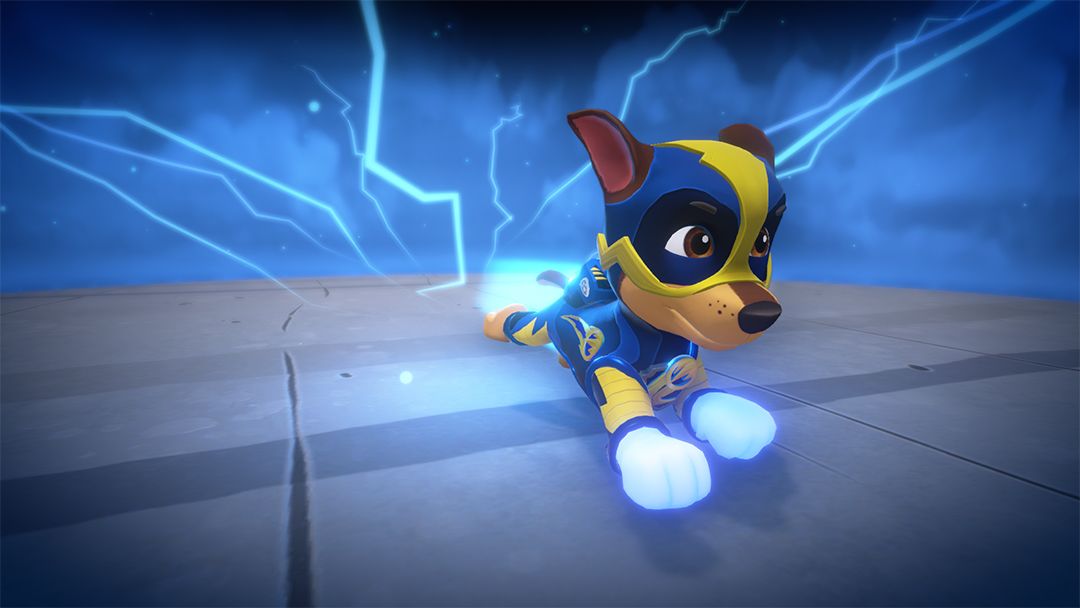 When Paw Patrol: Mighty Pups Save Adventure Bay was announced for the Nintendo Switch and other major consoles, I think there was an outcry of ironic and totally sarcastic excitement. After all, the average Internet user is probably outside the Paw Patrol demographic, and anyone old enough to leave a coherent comment, even if it’s completely sardonic, isn’t the target audience. However, in my household, where an excited six-year-old squeezes her Rubble doll in excitement, a new Paw Patrol game was definitely something that we were looking forward to. There were a LOT of hours put into the previous Paw Patrol: On A Roll game, and she still goes back to it occasionally to try and get the maximum number of Pup Treats from earlier levels that she didn’t 100% on. Paw Patrol and the game publishers, Outright Games, have already instilled a sense of completionism in my younger child, so it looks like we have collect-a-thons in the future as she branches into other types of games. But not just yet: let’s stick with Paw Patrol and see where we go from there.

For those who don’t know, Mighty Pups is a sort of offshoot storyline that the Paw Patrol has encountered due to the influence of a crashing meteorite. The Paw Patrol occasionally has side missions that take them beyond the bounds of their home area, Adventure Bay, and Mighty Pups is one of them, with each pup suddenly being imbued with superpowers. This was originally a long-form episode that was sort of a movie, and then it became a set of episodes where the Pups don’t always have powers, but their supernatural abilities kick in at key times. Let’s be clear, they aren’t breaking any new grounds: some pups have super strength, super speed, sonic barks, and Rocky even has a straight-up Green Lantern inspired (knock off) talent to make tools out of green energy. Why DC hasn’t sued them into the ground, I’ll never know, but I appreciate them pulling their punches on a kids series that, while it makes a ton of money, also makes a ton of kids happy. Anyways, like the previous game, the Paw Patrol now has to engage in some episodic adventures to help out specific people in the community (Captain Turbot, Mayor Goodway, all the greats) with their Paw Patrol vehicles and tools AND their new superpowers. It’s a win for everyone, trust me.

Outright Games have parted from the first game’s developer, Torus Games, in order to bring Drakhar Studio into the fold. While that seems like a bold choice (Torus has done nearly every Nickelodeon licensed game in quite some time), switching to Drakhar was important in bringing Paw Patrol into the 3D gameplay realm. While the original On A Roll was a 2D collection platformer, Mighty Pups Save Adventure Bay plays in limited 3D realms, allowing young players a taste of real movement through a much larger landscape, complete with more nooks and crannies to discover, platforms they can easily overlook without exploration and some serious challenge in navigating in a brand new space. For example, we were able to use an 8bitdo Lite controller on the previous because a traditional directional pad was more than enough for moving around. Now, however, a joystick is paramount to being able to get to all the locations necessary for solving problems and picking up both hidden badges and Pup Treats. Don’t worry, though: it’s a fixed camera, so you don’t need to worry about kids swinging around the perspective and making everyone sick. 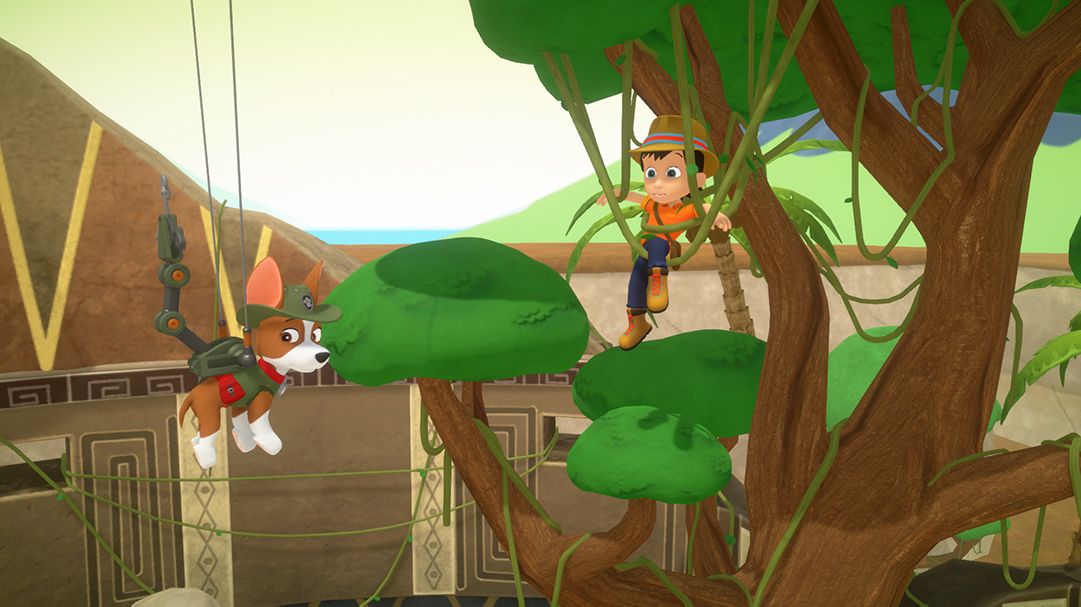 There are a huge number of improvements to Mighty Pups over On a Roll. The graphics are a massive step up, and I’m saying that from someone who’s watched far too much of the show. The details on the characters are much sharper and crisper, with fewer jagged edges and more of a sharp, clear view of all your favourite characters. There’s never been a performance issue per se, but the game generally looked better here, particularly because we ventured out into new textures and ideas than the previous game. Whereas the main crux before was navigating through the same replay of dock levels, mountainous ledges and familiar streets before, these pups really branch out and try brand new approaches to the gameplay. This also helps because previously missing pups, Everest and Diego, have now come to join the play, which is fantastic because they are both the more eclectic dogs to add some flair. In fact, Everest is even part of the second mission in a big way, so little fans who missed her the first time around will be pleased to see her make such early and often appearances.

Secondly, beyond the 3D aspect, Mighty Pups Save Adventure Bay is a whole new ball game. You often go out with two dogs instead of one, forcing players to be aware of switching characters (shoulder buttons) in order to accomplish specific tasks. Whereas the previous game automatically slotted you with the best dog for the job, this time you need to listen to Ryder’s prompts and also think about the issue yourself. Additionally, like I mentioned before, some of the badges and pup treats are out of the way, asking the player to really think about the world around them and figure if they want to find everything possible or simply move on without getting all the goodies. There is still no fail state in this game: if your little pups are too wonky with their movements, you aren’t going to accidentally fall off a mountain or drown in the ocean or something horrid like that. Drakhar used some of the ideas they had in Ginger: Beyond the Crystal, but certainly not all of them.

Also, the mechanics of the game have upped the ante as well, presumably growing with the player. Now the button movements activate the superpowers and different Paw Patrol effects are more complex, asking for multiple button presses or combinations with directions and faster changes. There’s even total changes in game styles. In the previous On A Roll, sometimes you’d take control of Skye and fly up and down to get Pup Treats in the air, but the handling was very lazy and floaty with zero pressure to react quickly. Now, when Everest is ploughing the streets, you have just a second to change lanes to get more snow and not hit the rocks in the road (again, no-fail state, but you still miss a chance to get Pup Treats). It felt like a very cartoonish version of Spy Hunter, and my child was equally excited to get the timing down pat and to change lanes in time. 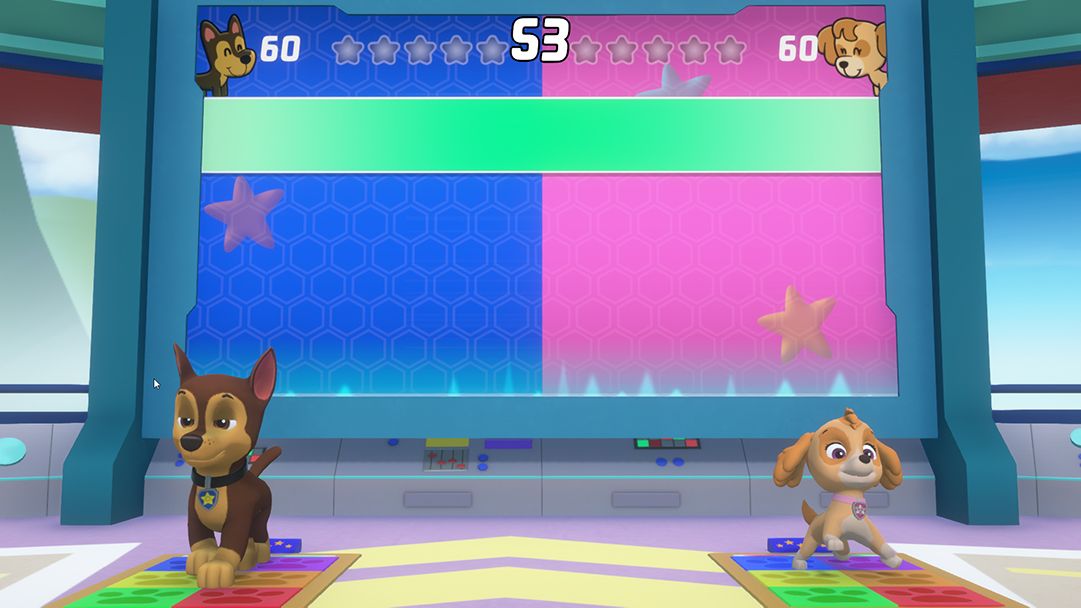 From a purely licensed standpoint, Paw Patrol: Mighty Pups Save Adventure Bay is an easy win for Outright Games and for parents moving into the holiday season. This is a really solid Paw Patrol game that looks good, has potential hours upon hours of play, and isn’t annoying in the way the previous game was. Ryder doesn’t repeat himself with prompts as much after the first level. There’s more variety in pups, focusing on the whole cast and less on the core of Marshall, Chase and Skye. The graphics look great, the plots are lifted straight from the show, and there weren’t any crash issues. In short, from a purely “my kid wants this and I want to make them happy” approach, it’s a slam dunk.

From a gaming perspective, Mighty Pups is an important step forward in the building blocks of a child’s gaming experience. On A Roll was a very inoffensive way to introduce a lot of the key ideas in gaming, with hand-eye coordination, the excitement of collecting items and the satisfaction of getting a good score all coupled with happy and familiar characters that wouldn’t run out of lives or be disappointed in you. Now, young players move up a notch, having more versatility, more variety, and more incentive to actually get those items. The badges are collectables they can view in a separate menu to see what they’ve accomplished. Getting more pup treats fills up a gauge that unlocks mini-games they can play at any time, including the infamously repetitive Pup Pup Boogie (a Dance Dance Revolution knockoff). Outright Games did well by tapping Drakhar Studio to make this one because it has more juiciness and meat to it without also adding layers of drama or possible sadness. My only concern is that parents who just had their children experience Paw Patrol might want to wait and get the older game first. Moving from On a Roll to Mighty Pups makes sense, but this new instalment might be very complex for the 4-5 age category who are just getting better at hand-eye coordination.

It might sound cheap, but any game that makes my family happy while also being a game is a win in my book. Paw Patrol: Mighty Pups Save Adventure Bay is a joyful adventure full of choices, variety, familiar characters and a fresh approach to the Paw Patrol gaming world. Laugh all you want, but it’s my daughter’s GOTY for certain, and I can always sign off on her playing a game that grows her love of video games.

More pups, more gameplay, more exploration, more fun, simply more of everything that made the first title so endearing to children, now with a 3D approach!