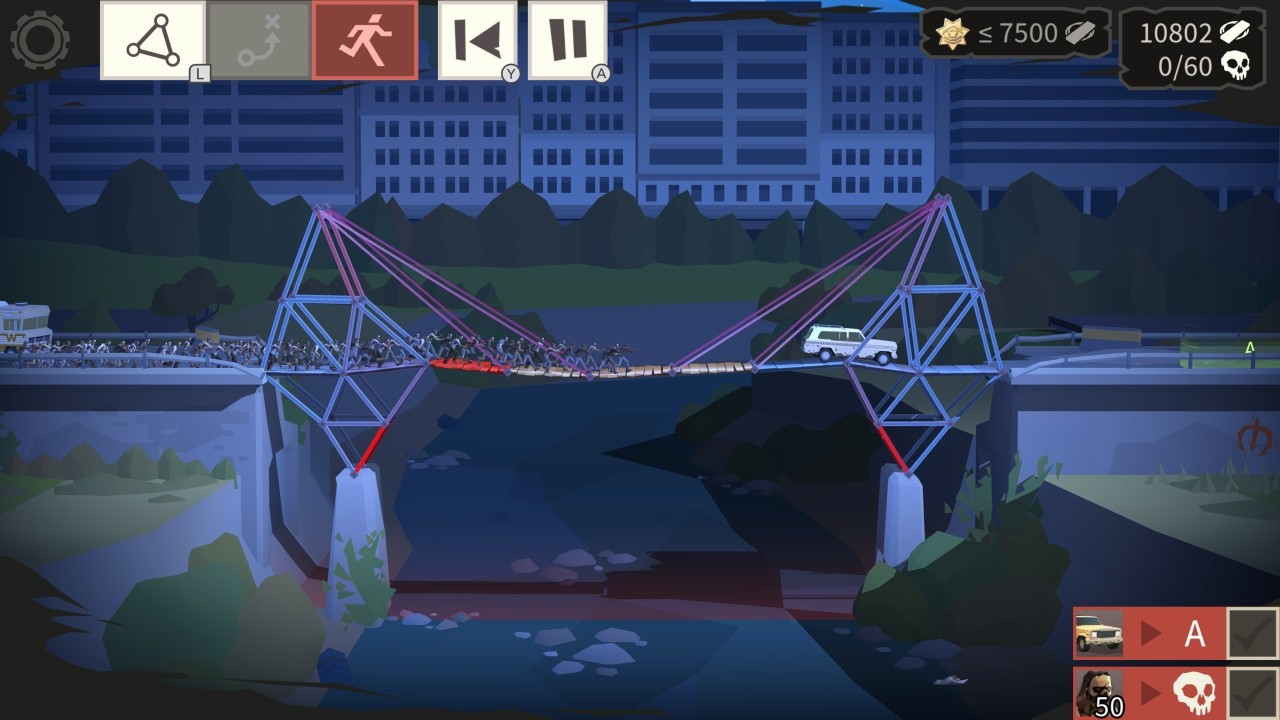 Honestly, when I saw the title, this game sort of made sense. For those who don’t follow The Walking Dead religiously (or kicked off shortly after the show went totally bananas), there’s a fair amount of plot lines where the gang is trying to figure out some way to deal with Walkers in the most creative ways possible, and I believe one plot point was even making a bridge. After all, when the dead outweigh the living pound for pound, you gotta get creative in your survival endeavours. Additionally, it’s not the craziest mashup we’ve seen, not even with the Walking Dead franchise. With things like Walking Dead Pinball, Walking Dead sim management game and the really great Telltale series, it barely registers a raised eyebrow when we see the comic-turned-neverending-tv-series branded across yet another new walk of life. I’m personally looking forward to Neegan branded whiskey at my local liquor store, and I refuse to Google if that’s already a thing or not.

With Bridge Constructor: The Walking Dead, you’re officially put into the storyline of two nobodies, Miles and Kyra, who are crafted for the express purpose of making this game exist, but then we need to immediately bring crossover characters into the fold. Keep in mind, the continuity of things doesn’t totally come to light, so please don’t give yourself a headache trying to guess where in the timeline of each person this game takes place. Just know that Eugene is here to deliver long-winded, vocabulary heavy lines to express his simple thoughts, Daryl is gonna be gruff but kind, and Micchone has some cryptic but important remarks to express through sneers and spittle. You have a brief bit of exposition to let you know that everything is still going to hell, but, through sheer architecture and some Home Alone style trappings, you all may just be able to survive the apocalypse and maybe learn a valuable lesson or two along the way. Alright, the second part is more implied than spoken, but I think we all had that feeling.

For those unfamiliar, Bridge Constructor is a physics-based puzzle game that involves figuring out how to use wood, planks, reinforced materials, specific pivot points and other important ideas to create a structure. For each level, you have a set amount that you should try and get to or under: each piece of wood and each strut costs some amount of “money,” and getting it under budget is how to get a big win instead of just a normal win. For the sake of The Walking Dead, the game is further complicated by the factor of The Walkers. Most of the time, you need to either avoid or eliminate the dead, usually through carefully planned smashing defeat or crushing victory. You have some control over these ideas through the characters, and, as you may have expected, there are pros and cons to each character. Eugene, whom you begin with, moves a little slower but has the ability to throw a talking doll that attracts Walkers to a specific place, perfect for setting up an airstrike a la shipping crate. The objectives are clearly outlined at the beginning of each stage through both colourful exposition and then very direct game speak narration to tell you what to do. Survive, escape, etc. 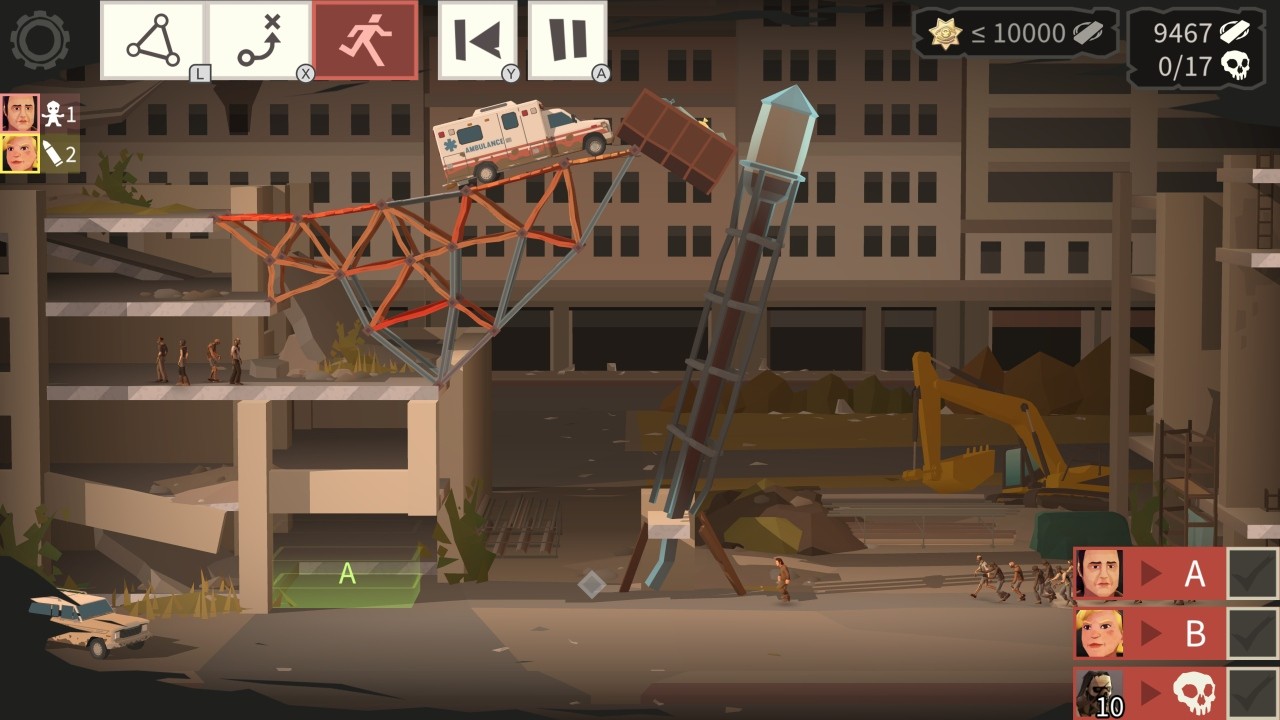 Taking apart the game bit by bit, the concept of Bridge Constructor: The Walking Dead is interesting and incredibly challenging. This is one of those puzzle games where you understand how things work immediately and then blaze through the next twenty levels with just enough pause to see how the goalposts change OR you struggle for thirty minutes at a time trying to ham fist your way through a single objective. Careful consideration gives you better ideas how the weight of things affect the different builds and where you should/shouldn’t put in different pieces in order to make your bridges stable but not too heavy. For me, I am positively dogshit at this sort of game. I never took physics in school and barely understand mathematics outside of a purely elementary level approach. So often I would painstakingly put together what looked like an awesome bridge only to hit the play button and watch my character step on it, see the whole thing collapse, see them crumple into a pit, see Walkers fall on them like death confetti, and then see the giant cable spool crush us all in a truly Looney Tunes ending to the fiasco. Across the different chapters, I never once felt like I “got good.” More than a couple of times, I had to ask for help from my wife (who knows physics a lot better than I do) to get some pointers for where I could put things so I didn’t accidentally create an execution accordion.

The interface with the game is a tad frustrating, as this is a puzzle game where some things work better in touch and some with buttons. Bridge Constructor has a good layout to afford either finger or controller, but mixing the two is the fastest way to get something accomplished. Elimination and pivoting connection points is better with buttons, but initial creation and fortification is better through touch. I appreciate that you can toggle between the two with no delays, yet I shudder at the idea of having to play this up on the big screen and only having buttons in order to get through the creation process. I think it would have taken even longer to get things done as a result.

The Walking Dead element within the game is something that comes with a mixed bag of satisfaction. On the good side, the use of Walkers as antagonists and puzzle elements is a successful one. Emulating the shambling, single-mindedness of the dead is effective in inspiring new and drastic ways to survive. The characters chosen from the franchise work well here as “heroes” to help boost both the survival rate and morale of the cast (both NPC and the players). The representation through the polygonal art style of Bridge Constructor looks good: I appreciate having the name labels every time someone speaks, but you can tell Daryl is Daryl without being told he’s Daryl. Plus the script for the characters is modestly well done, so it doesn’t feel super jarring or awkward having them be a part of this particular set of endeavours. 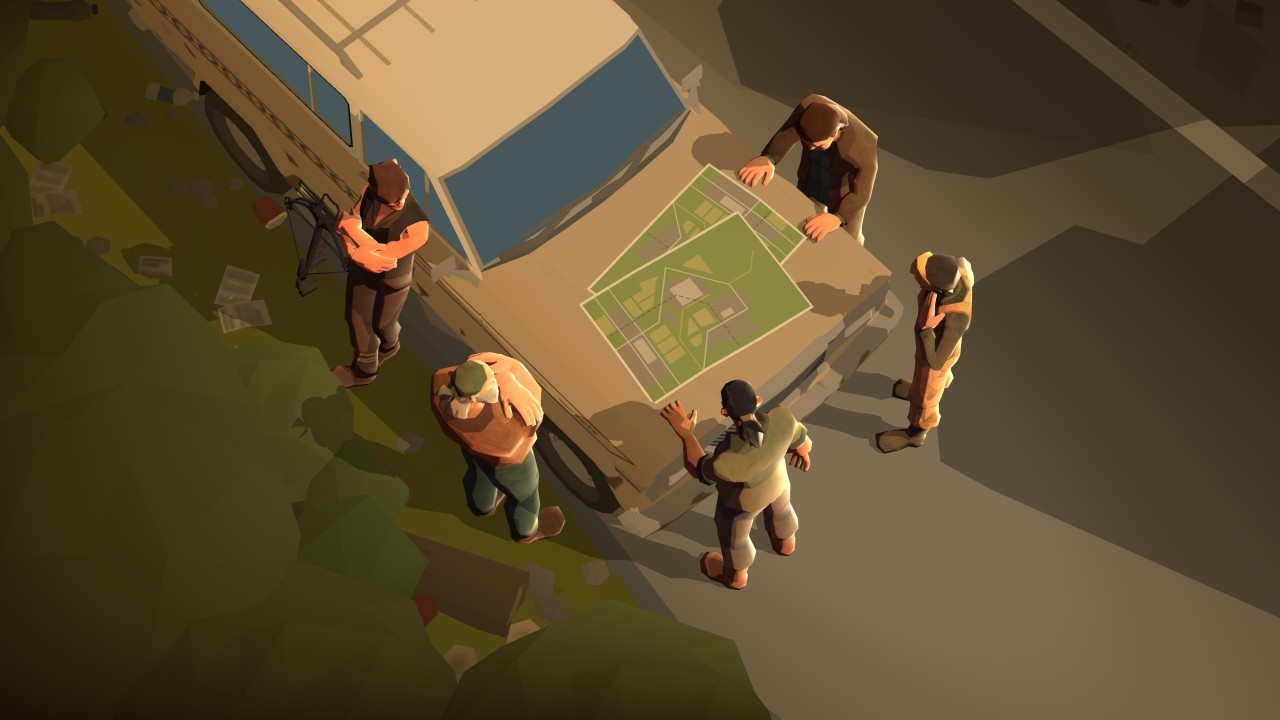 On the other hand, I was disappointed by the audioscape of Bridge Constructor: The Walking Dead. When you load up the game, you’re greeted by the familiar, borderline iconic composition of Bear McCreary, and it puts you into the AMC mentality. Then you have a voice-over intro, properly painting this dramatically grim outlook for everyone, and you’re totally psyched. From that point onward, the actual spoken dialogue is slim to none, and the music slots into incredibly generic, background humming to basically keep the game from being creepily silent. There’s sound effects from drops, explosions, groans and destruction, but nothing really grabbed my attention. I don’t think I would have minded had the game not started out with such a cannon-shot of promise.

When Bridge Constructor partnered with Portal some time ago, the idea was novel and exciting, and made total sense: puzzle begets puzzle, and the two formed a pretty gnarly unity. Here, you’ve got two very diametrically different groups trying to form an uneasy alliance. Puzzle games take time, and Bridge Constructor in particular is a hard one to simply rush through. The Walking Dead is a story that often slowly builds tension and then releases in a spectacular fashion, but it’s a different kind of ebb and flow than you see with Bridge Constructor. The idea is cool, but the execution can be janky if you don’t get into the Bridge Constructor mindset first and the survivor idealism second. If you are a fan of the game AND the Walking Dead, perfect, grab it and enjoy. If you’re more of a Kirkman fan and want to see where the IP goes on something new, take heed: this could be a very, very rough slough for survival.

The best way to deal with Walkers is, apparently, carefully constructed structures that lead to both safety and cartoonishly hilarious deaths.