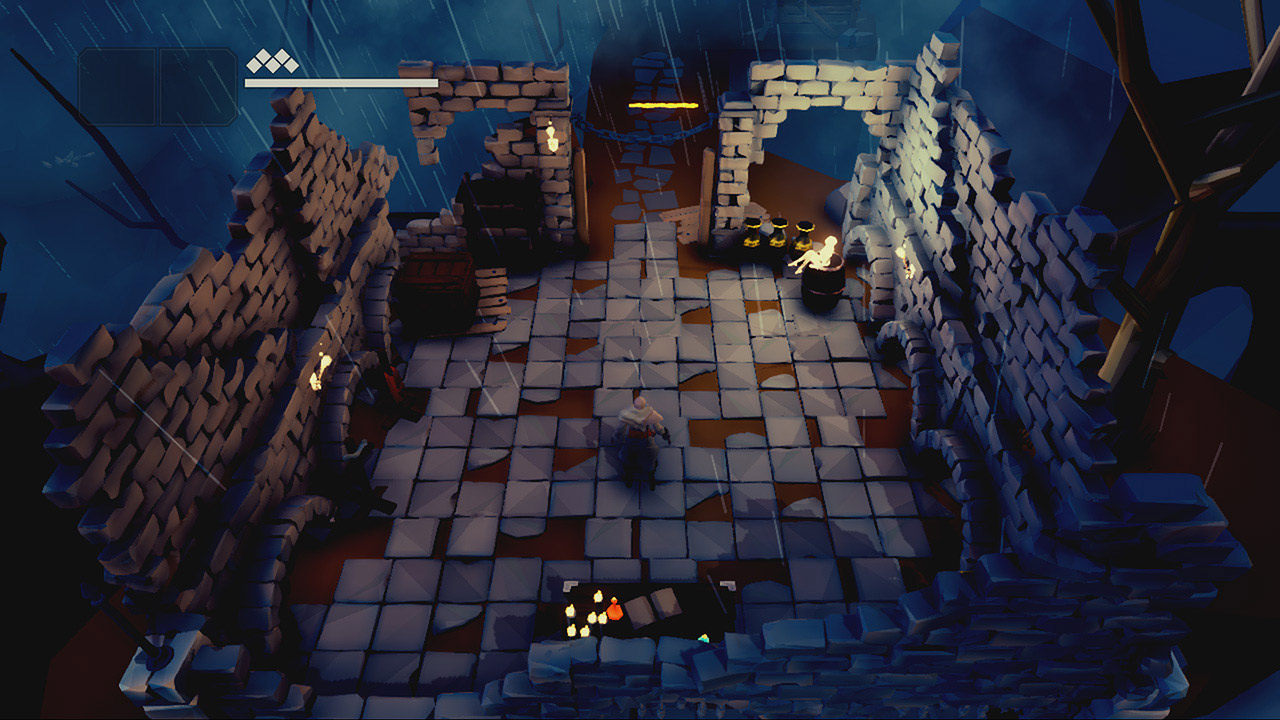 Action Role-playing games seem to be the flavour of the month upon the Nintendo Switch at the moment. First we had Titan Quest, which was quickly followed by Victor Vran; all of them vying to make their place upon Nintendo’s system before the imminent release of Diablo III. The latest of such games within its genre, comes in the form of Fall of Light: Darkest Edition. But is this a game that will shed a bright light over the other games within its genre, or does is it condemn itself into the darkness of another forgettable title within the depths of the Switch’s saturated indie offerings?

Developed by Runeheads and published through Digerati Distribution, this story-driven, action role-playing game places you within the medieval armour of Nyx, an old warrior who sets out on a quest to put an end to the realm of darkness imposed upon his land by the evil sorcerer Pain. In order to help him on his quest, Nyx is joined by his daughter, Aether, an indigo child whose light radiates her surroundings, bringing a brightness to the claustrophobic settings within the darkness. In order to reach the last place on Earth that still basks in the sunlight, the pair of them must work together in order to traverse the hidden landscapes and combat the enemies that stand before them and their goal of eternal light.

The use of this paternal partnership, as well as the clash of both darkness and light, brings a nice element to what may have otherwise been, a rather cliched story. In order to get the best out of each other, the pair must remain together. This becomes an important element, as Aether not only illuminates the darkness around her, but also grants extra strength to her father. In turn, Nyx must work to protect his daughter and keep her safe from harm. Although linear in its overall arch, each level contains a variety of branching routes that need to be explored in order to gain defensive items, weaponry and gold; as well as seeking out Shrines of Power, holy statues that grant respawn points should you meet a grisly demise; each one activated through the consecration of prayer. 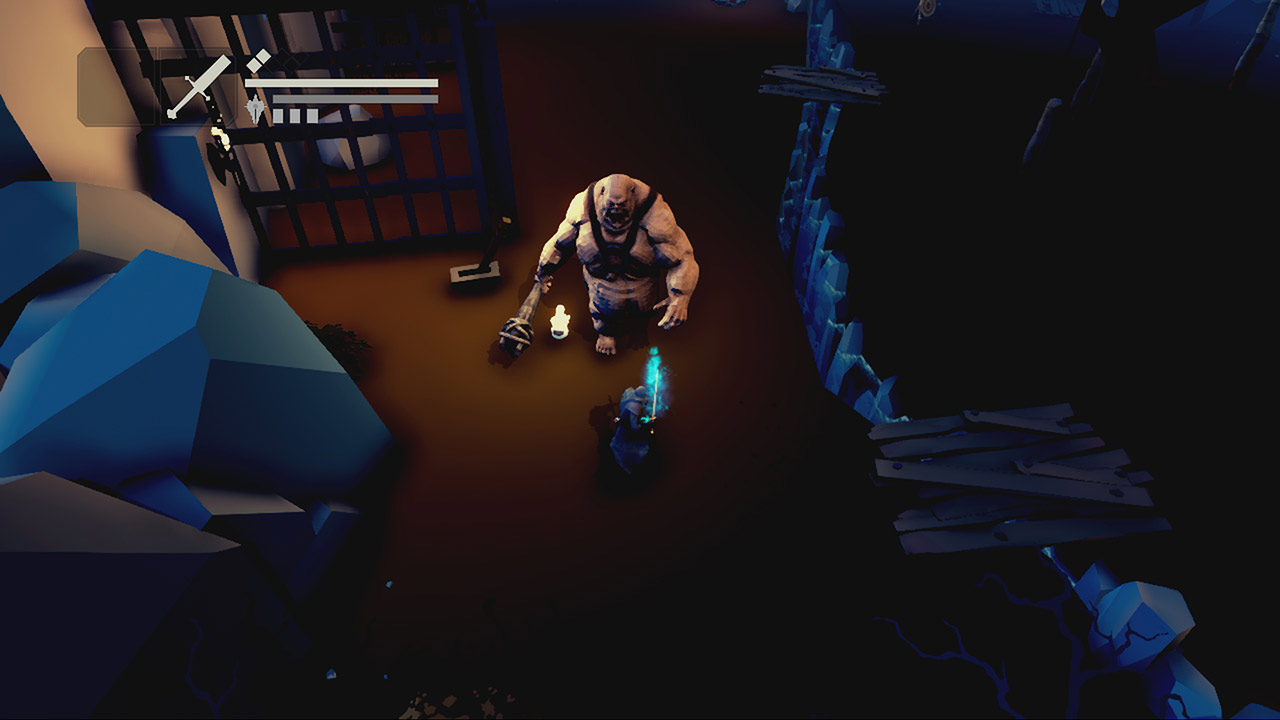 However, should you die, something that you will undoubtedly encounter a lot in this game, then Aether remains where you fell, while you respawn at the last shrine in which you worshipped. This means that you need to traverse a path back to your fallen, or waiting, daughter without her stat-boosting powers; making the journey a lot more hazardous than it was before. This makes Aether even more important in order to progress through the game, as she is the only one who is able to activate these shrines. Controlled by the AI, she does a pretty respectable job of following you around. However, you can also take her hand and guide her around the levels. You can also leave her to wait for you should you need to, but be sure that the area is safe first; usually around campfires and shrines, where their light protects her from the shadows that surround.

Nyx is the only one of the pair who has the ability to fight. Using R for light attack and ZR for a heavy. However, more importantly are the B button to dodge and roll and L in order to raise your shield. These two mechanics are important, as Fall of Light plays in a similar way to the infamy of Dark Souls; meaning you need to learn the best mechanics of fighting and defence with each enemy you encounter, as well as the fact that you’ll die a lot in this game. However, this isn’t always necessarily due to the difficulty or challenge of the game itself. The mechanics of the combat within this game are very slow and clunky in their execution; often resulting in a lot of missed strikes, or mis-timed dodges that send you over the edge of the nearest precipice.

Unfortunately, this leads to a very frustrating element of the gameplay; especially as you progress and the enemies become stronger with bosses and shadow varieties. However, there are ten different classes of weaponry within the game, meaning that you should find a style of fighting that suits your way of playing. For me, I found the long-range of the crossbow to be the safest and most effective. There are also a number of collectibles that can help make your job a bit easier. For instance, the amulet of shadows awards with a health extension and recovery boost. 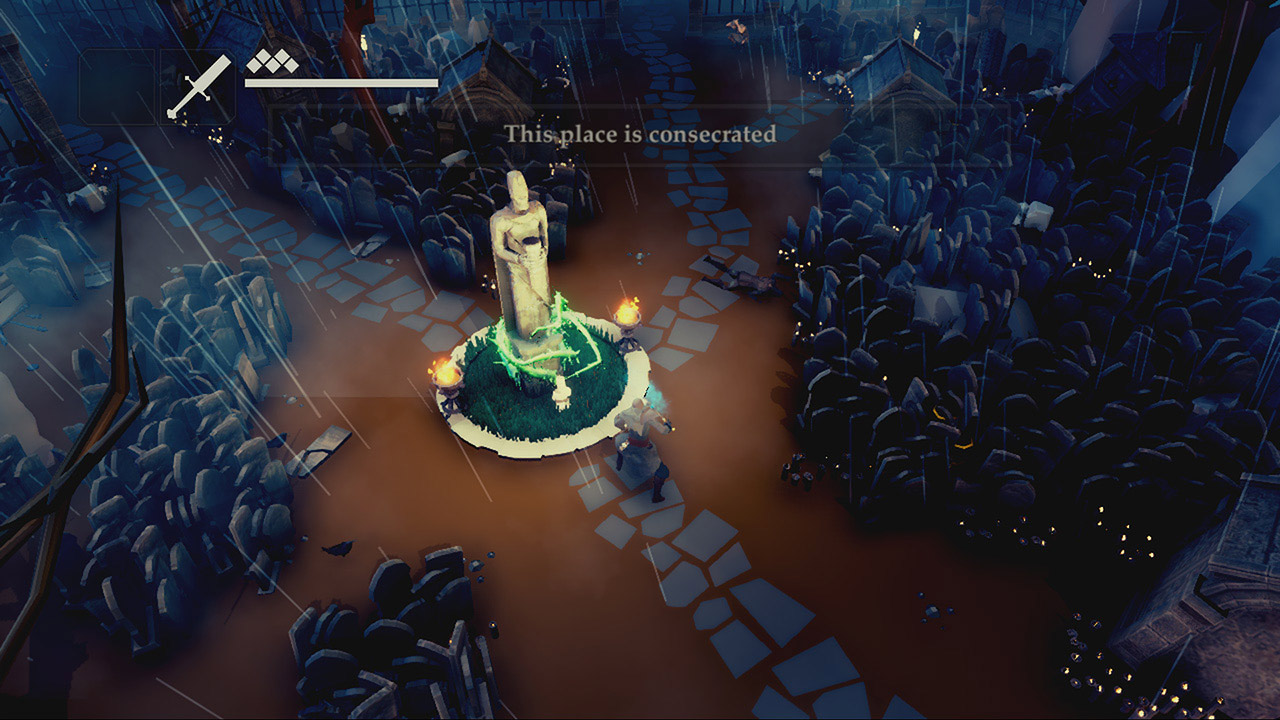 For an action role-playing game, the pace in which it needs to be played doesn’t really match the style of its genre. You simply can’t rush ahead or into enemy encounters, as the game is very unforgiving. Some may be put off by its difficulty, even in normal mode this is a punishing experience. However, the game’s engine also runs at a sluggish pace, even stuttering when the screen is filled with too much action. It all adds to produce a rather slow-moving game, both in terms of pace and progression and when coupled with its gruelling difficulty, produces a game that is enjoyable in bursts, but ends up frustrating over the long-term.

Graphically, the game presents some nice environments; as well as some pleasing lighting and particle effects. I especially liked the character model of Aether and her glowing form, but other models look rather basic in their execution; this is particularly true when it comes to the form Nyx, as well as some of the animations associated with combat. Although the level designs have some nice details, you often come across other locales that look distinctly basic and barren in their aesthetical look. However, the game’s audio qualities fare a bit better in this respect, providing a soundtrack that suits the settings well. It’s probable saving grace though, comes in its story, which is quite intriguing and helps in drawing you into the game.

Overall, Fall of Light: Darkest Edition offers a cheaper alternative to some of the other titles available within its genre. However, you will get what you’ve paid for here, which is a sub-standard offering when compared to the big-hitters out there. There is a playable game here, but just be prepeared for a gruelling session, as well as some frustrating moments with its Dark Souls mentality and clunky mechanics. This Darkest Edition contains a few new additions to the base game, namely in the form of a new dungeon and new enemies; bringing its total play-time to between ten and twenty hours, depending on how you play. This is by no means a bad game, its challenging and does entertain, making it ideal in a casual capacity; but within its genre, there are better titles available. Saying that though, I’ve enjoyed steadily progressing my way through the story, even if it is a long haul. Some interesting mechanics around Aether and her father make this an interesting premise, but should I want some ARPG action, then this isn’t the first title that comes to my head.

A cheaper alternative to some of the action RPG’s out there, but you’ll only get what you paid for.