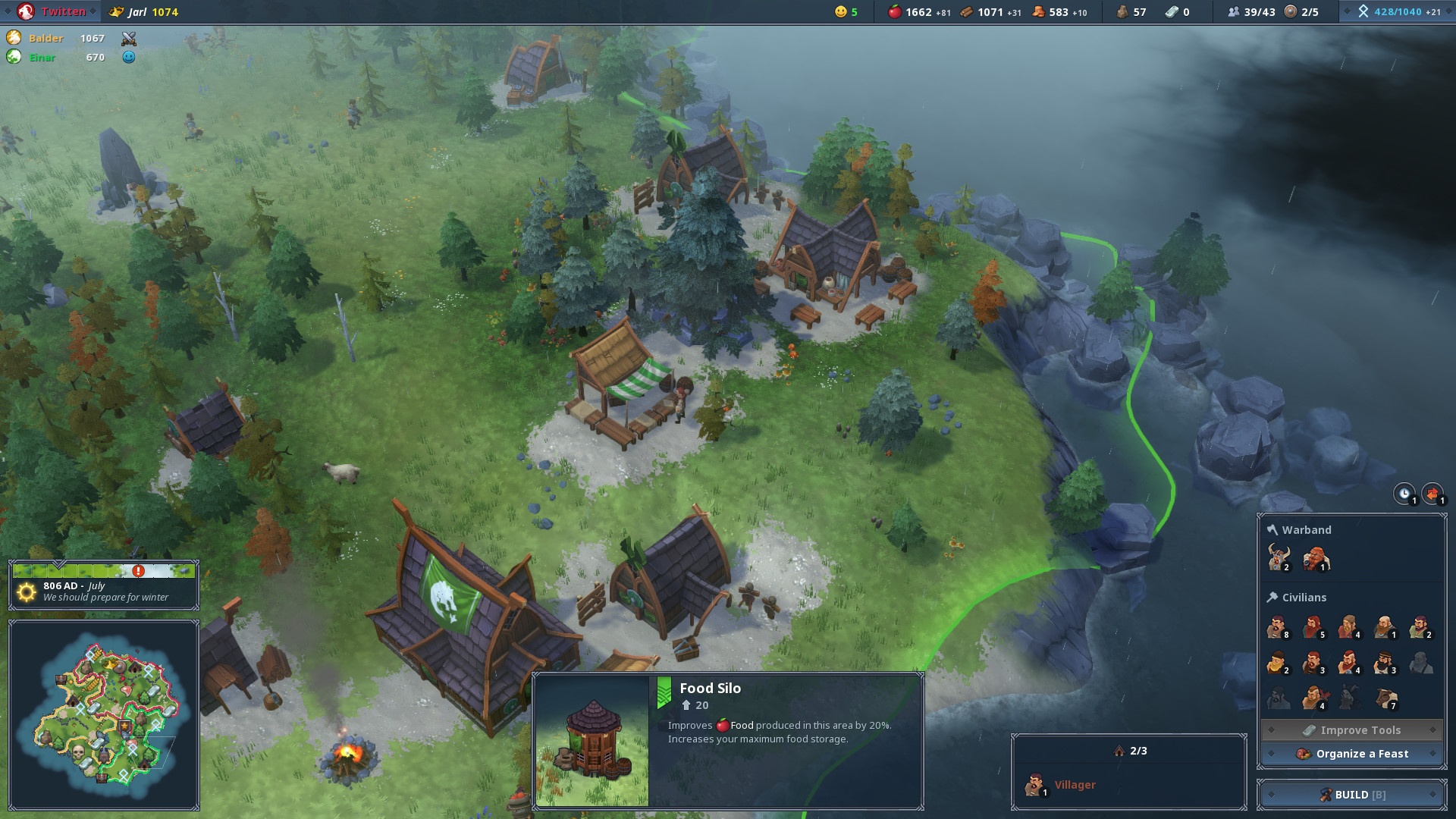 Northgard is a viking themed strategy game from Shiro Games, the studio behind the well renowned Evoland series, and because of that, I feel like this game came out of nowhere, when you compare it to the usual hype leading to the studio’s prior releases. In any case, this might simply be due to the fact that this is indeed still a work in progress

The premise of the game is pretty simple and it’s nothing really unique if you compare it to other games from the genre. You play as one of various viking clans that has arrived on a new continent and your objective is to dominate this new-found land, either it be by eliminating the other viking clans or gaining enough fame. As far as I’m aware, the game features at least four different ways in which you can achieve victory, so it’s not an all out warfare kind of game. One time I was about to clear the last remaining clan with my troops and I just lost, because the AI achieved a wisdom victory. As of right now the game only allows you to play skirmish mode, but multiplayer and campaign modes are coming. In the same way, only three different clans are available right now, each one having different starting and long-term bonuses which might fit some people’s specific gameplay style.

With that said, the game is very player friendly, with very short yet useful tips always popping up, acting as some sort of objective indicator. Besides that, the interface is very clean and functional, which helps in keeping things simple and good looking. In terms of visuals I believe there is not much to be said here, the game looks good plain and simple. Whether you like it or not, that is solely based on your personal preference. For me it reminds me of a cartoony Age of Empires or the old Settler games. Not only that but each different set piece, unit and building looks different from another, this is a fine example of how game aesthetic should be done so that looks don’t get in the way of functionality and practicality. Speaking of which, sound queues are also nicely done, and it’s very easy to know when you’re under attack or something is happening because of that. That said, the music is also on par with all of the above, it’s perfectly fitting of the theme but I would like to see some more tracks or diversity thrown into the mix. 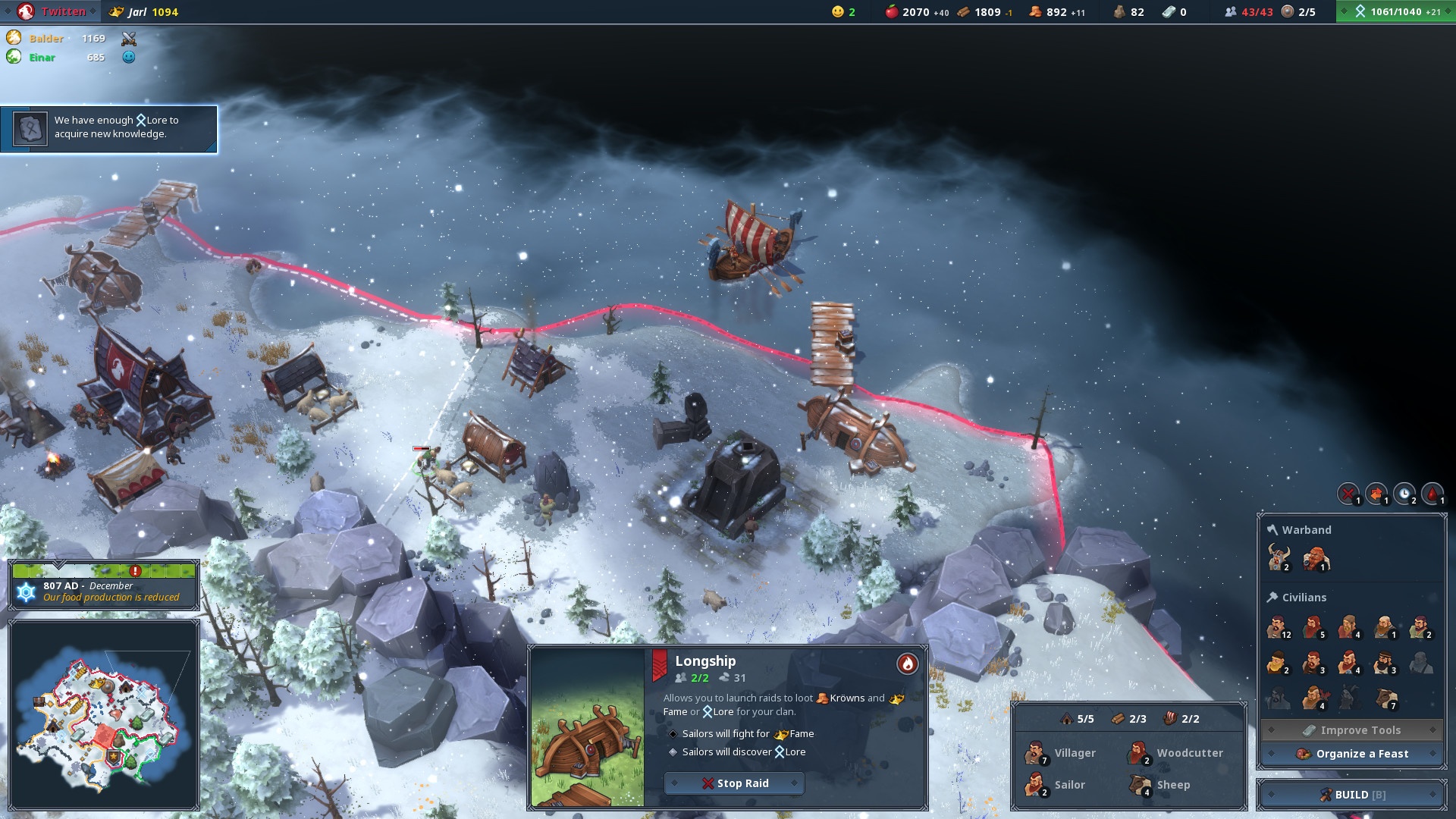 Right now you can play skirmish with up to 3 AI players but these are not the only forces you can and go up against. There are also beasts and creatures which will attack your territories so you should always keep an eye on your borders. Instead of having an actual open map like in most games of this genre, Northgard divides the map into several areas and you start on one of them. In order to see what’s on an adjacent area you’ll have to send a scout to explore it, which usually they tend to do on their own. Once the exploration process is complete, you’ll be able to see what kind of resources that area holds and if it’s defended by any enemies. If the area happens to be defended, you’ll need to clear it with warriors before you’re able to colonize it, which costs you food and the cost is increased each time you colonize a new zone. This might sound rather simple but the way the game manages to put real strategy and planning into place is by limiting the amount of buildings you can place on a specific area and by limiting the amount of workers you can assign to each building. Certain zones will also have important resource deposits which are not present in every area, such as fertile land in which you can construct farms or mines from which you can extract stone and iron, while some might even have ruins, shipwrecks or other special sites, which your scouts can explore in order to find other resources. That said, this is what you need to take into account when building, resources like stone can be particularly scarce since each mine has a limited amount of each resource, so you need to choose what you want to build and upgrade carefully.

In a way I must say that this can be a bit random since the maps are randomly generated, or at least they appear to be, so you might find yourself cornered with ocean on one side and cliffs on the other, leaving you with only one way to expand. This can be extremely tricky early on if another clan decides to expand in that very same location. Curiously enough, scouts can explore freely inside another clan’s borders without triggering any kind of aggression. On the other hand, if you want to expand to a free territory on the other side of another clan’s borders you have to first colonize that clan’s territory. Conquering another clan’s territory works in a similar way as conquering a neutral territory, first you have to clear it out of enemies and then you need to hold troops there until it becomes neutral again, only then can you colonize it.

In terms of an actual strategy game, the game is very easy to get a grasp of and everything is very intuitive. There are five different kinds of resources, food, wood, stone, iron and krowns, and all these are gathered by simply constructing a specific building and then assigning villagers to said building, which will then turn them to workers for the cause. Besides that there’s also lore, as an actual resource, which substitutes what you’d usually call research points on other games. These serve to acquire passive bonuses and blessings, and acquiring all of the four available blessings is one of the various victory conditions. 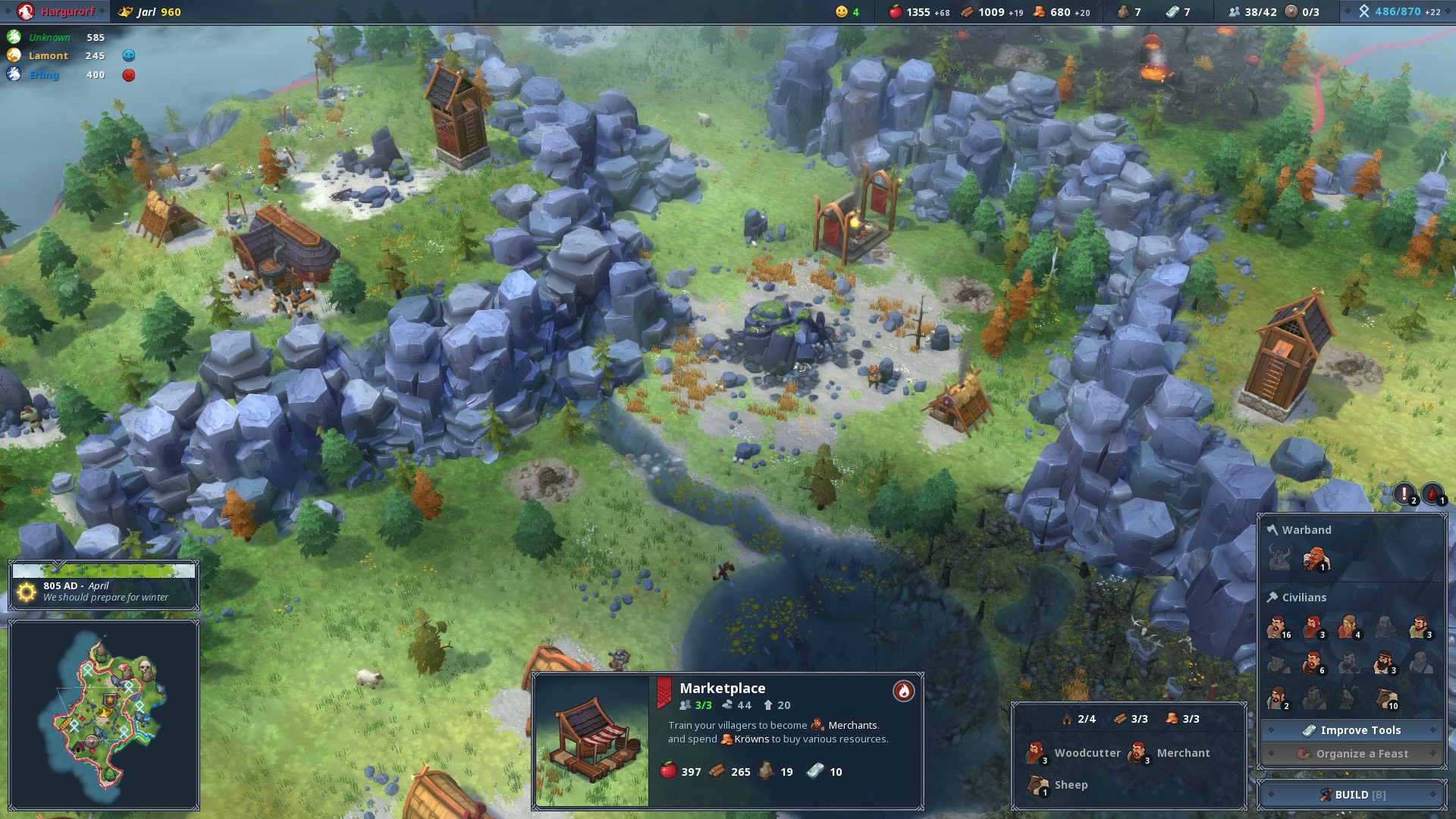 In any case, what makes Northgard interesting and fun to play is the small little mechanics such as building a longship to then carry out raids, stocking up food and wood for the winter when production takes a big hit, random events such as blizzards, rat infestations or the appearance of portals leading to Helheim which spawn Draugr. Managing resource consumption by your population and their overall happiness also adds a new complex layer to the seemingly simple gameplay. However, it is important to note that there have been quite a few people, myself included, who have been experiencing some crashes and errors that don’t allow you to resume a saved game but it appears that these issues are being worked on and I’m confident that they will be fixed.

In the end, Northgard is an extremely fun and enjoyable game as it is and it has everything to become a whole lot better, all it needs is more clans to add a bit more variety to playthroughs and some refinement. Other than that I’m particularly looking forward to see how the campaign will be done and I can’t wait to get my hands on the final product. If you’re into strategy games that try to distinguish themselves from others out there with little mechanics or if you just need something to feed your viking needs, I think you should give Northgard a try. If you’re still hesitant however, I recommend you wait to see how it shapes up along the development process.