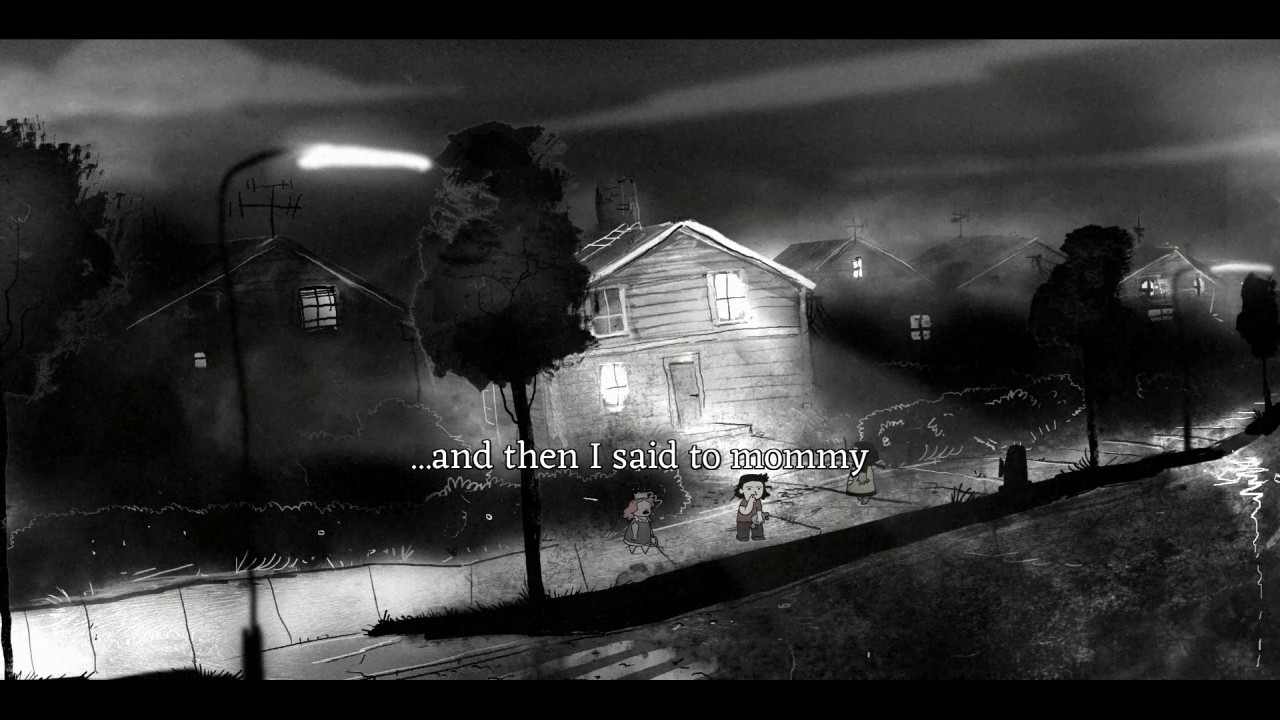 Point and click adventure titles are easily one of my favourite genres. Ignoring the slow pace and explorative options, these games are often able to examine themes that aren’t necessarily covered by other genres. Be it mature subjects or pure escapism; the possibilities are unlimited. With Lydia, it fits into the more mature aspect of narratives, despite the age of the protagonist.

As you enter Lydia’s world, it’s the same as any other; spending time with friends, a bedtime story told by her father and a go-to companion in the form of a teddy that offers comfort in her time of need. Like any small child, Lydia scares quite easily and following a tale by her father, she’s a little apprehensive in going to bed; but teddy is there to help. Monsters under the bed is a common theme, but the beast in Lydia’s world resides within the wardrobe. With teddy’s assistance, they open the door and step into Lydia’s wardrobe, or is it her psyche?

Lydia is broken down into small chapters. A title card appears with the title character or theme of each segment that follows, and as the spectator in the story, we follow various stages in Lydia’s life. I use the term spectator, as a lot of the time it feels just that – there aren’t really that many objects or people to interact with and therefore lacks any skill to make any form of progress. You simply go through the motions to unravel the story and delve deep into her past.

The art style is fascinating. That’s not a cop-out and to give a generalisation of what Lydia looks like, but the choice of aesthetics are very mismatched, yet works really well. The actual characters within the game are a little crude at times – especially the animation – but the backgrounds, both static and dynamic are marvellous. I’d say that in some way I was quite blown away as a lot of the scenes are a work of art in themselves. I wasn’t the biggest fan of the character design, but when it’s juxtaposed with the backgrounds, it works really well. 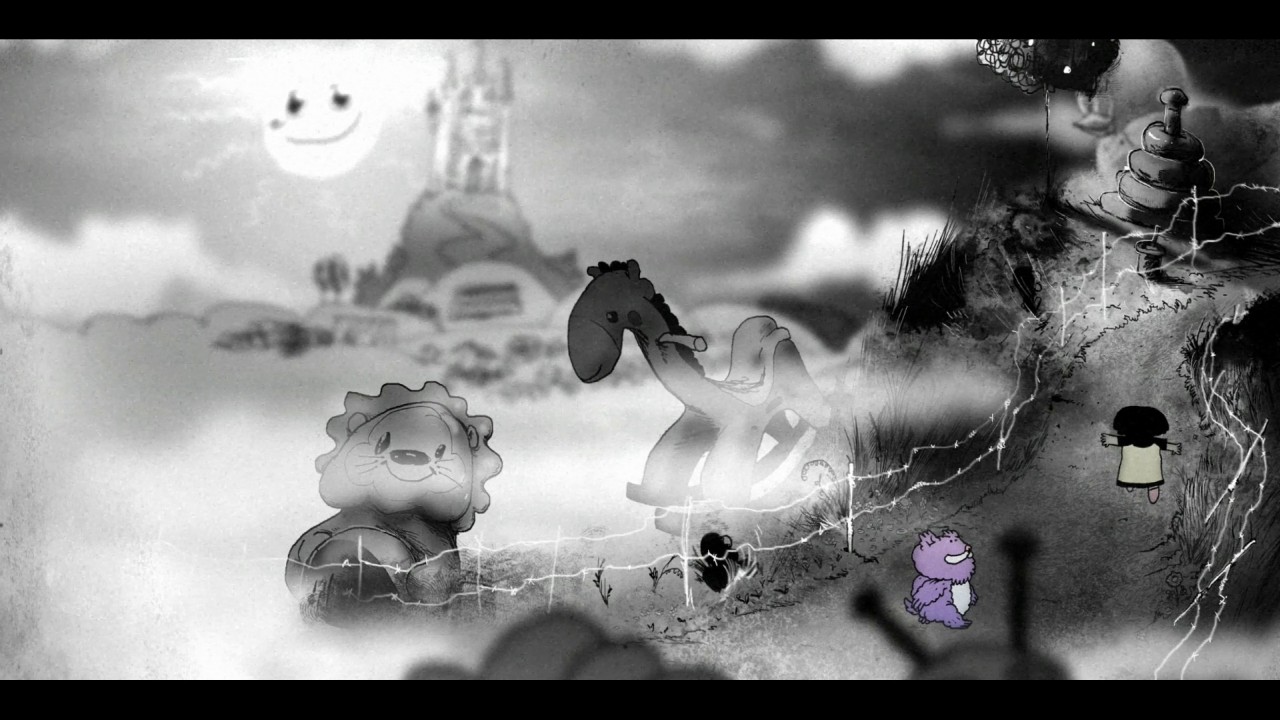 It’s quite apparent that there are a few filter-like effects throughout and they work perfectly. There’s never a time when it feels like overkill, and despite the vast majority of the game, with its very grey palette, looking very bleak, there’s an element that makes it so alive and tangible. Without going too much into it, while I wasn’t the greatest fan of the people character design. other characters in the game were fantastic and intricately designed.

With the emphasis on Lydia being a bleak-looking game, and also with its themes, the score sets the tone as well. Early in the game, I found myself wandering through a forest, and the sheer ambience was spot-on. I almost wanted to stay in the scene and not leave as it was evoking so many moods, taking me back to the time when I first heard Akira Yamaoka’s Silent Hill 2 soundtrack. Unfortunately, the audio is massively let down by the ‘voice acting’.

Instead of spoken word, the dialogue is jibberish (possibly so that the game can be localised around the world), but it would have been just as effective without any sound. A text-based narrative proceeds throughout, and while it’s not the wordiest of titles, the choice of vocabulary is concise and sometimes profound. I just wish that I didn’t have to mute the vocals as it really did put me off and just seemed so out of touch with the themes. The best comparison I can make is the sound of someone on the phone in an animation – comical, over-exaggerated and unclear what is being said, but the emphasis on unnatural.

So we return to the gameplay of the game as excluding the ropey voice effects, both the graphics and sound create the atmosphere. Still, the animation is a little bit questionable at times – especially the younger Lydia who walks like a scarecrow. As a father of two, I’ve never witnessed my children walk like Lydia – it was a bit too much of a caricature. Ah yes, gameplay.

You can move Lydia around the screen with the left stick and should you be within the vicinity of anything of interest; you press the A button. A little icon appears on-screen at that time so that you know what to do, but there’s no way of knowing what to interact with unless you walk around the screen. Granted, the areas are quite small with the odd invisible wall, making it clear that this is a linear experience. 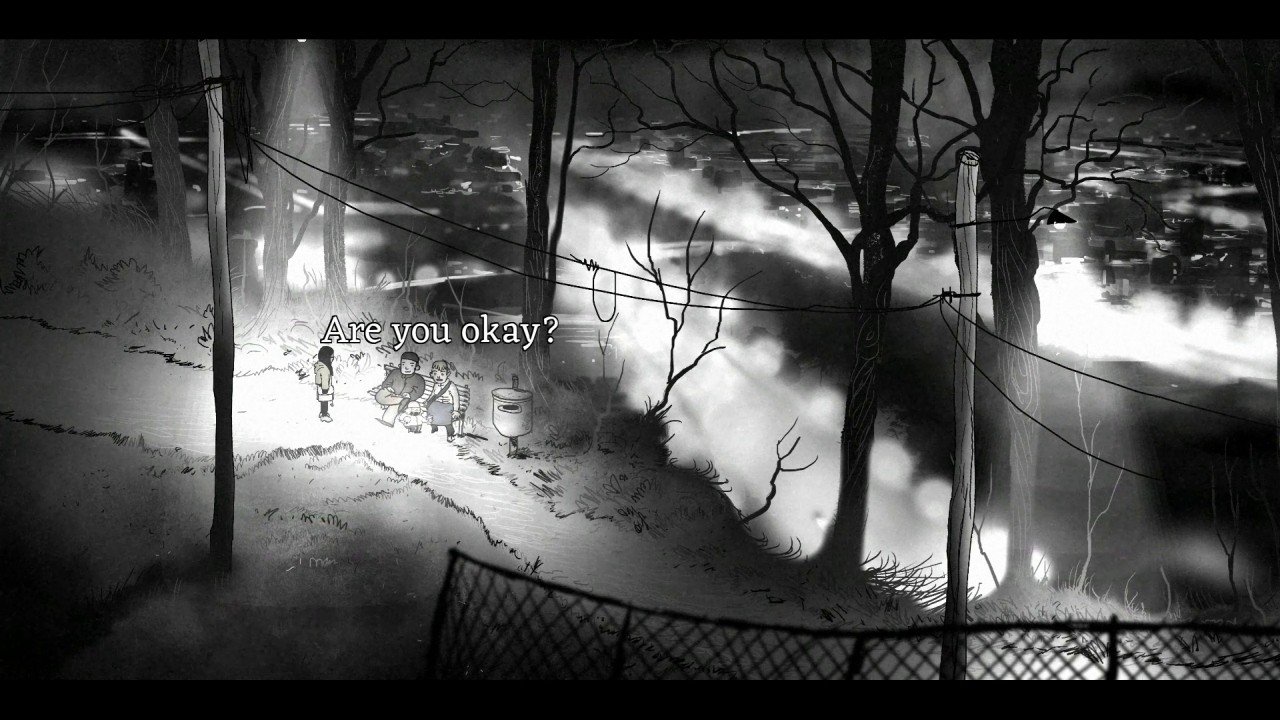 Another factor with Lydia is dialogue choices. With any decent adventure game, you need a repertoire that will give you multiple paths to take or make the experience a bit more entertaining – whether it be a witty response, or something obscene, it’s interesting to see how the NPC will respond. With Lydia, you respond not with a line, but an emotion. Should you hear part of a story your father tells you or an introduction of a monster, you can opt to be inquisitive, angry, even sad. Regrettably, your choices don’t have an impact on the story – think of Lydia more of a visual novel than an obvious point and click. There are not any puzzles to solve, it’s more of a vehicle to show a message, and boy does that message hit hard.

You come to read reviews to give you an opinion on a title and whether it’s something worthy of your time or hard-earned cash. While you won’t agree with everything a reviewer says, if you tune into their preferences, you might identify with their type of game and hold up their appraisals with a little bit of kudos. Unless the review is about the author, I’d assume you don’t want to read about their lives unless it was relevant. Well, I haven’t experienced the themes in Lydia first hand, and I’d naively want to think nobody does, but it happens.

As a father, the story hit me quite hard and in a good way. Not that it was an uplifting story, but poignant enough to appreciate what I have and what I hold dear. It’s pretty rare to feel that way after a game unless you identify with being bitten by a radioactive spider and get emotional every time you see Peter Parker. If Lydia were a tool, it would be a sledgehammer. Its message is strong and knocks you right in the chest. While I doubt you’re going to be miserable playing Lydia, you won’t be bouncing across the room bellowing out what a fun experience it was. But at the same time, it’s an experience I would encourage – even if it’s just to bring awareness to the subject matter to support others.

But let’s reel it in a bit. You have the option of playing this and if it doesn’t sound like the kind of game you want to play, then don’t force yourself to. You’ll likely finish it in an hour or so and based on the ridiculously low asking price; it’s a no-brainer from my perspective. However, I appreciate the lack of gameplay and choice will restrict some interest in the title, and I respect that. Still, it might be worth stepping out of your comfort zone and trying something new.

A hard-hitting tale with serious themes based on real-life experiences, Lydia isn’t the most uplifting of titles, nor does it feature the best gameplay. However, if story is one of the aspects you look for in a game, as I do, then I would encourage you to consider buying this.