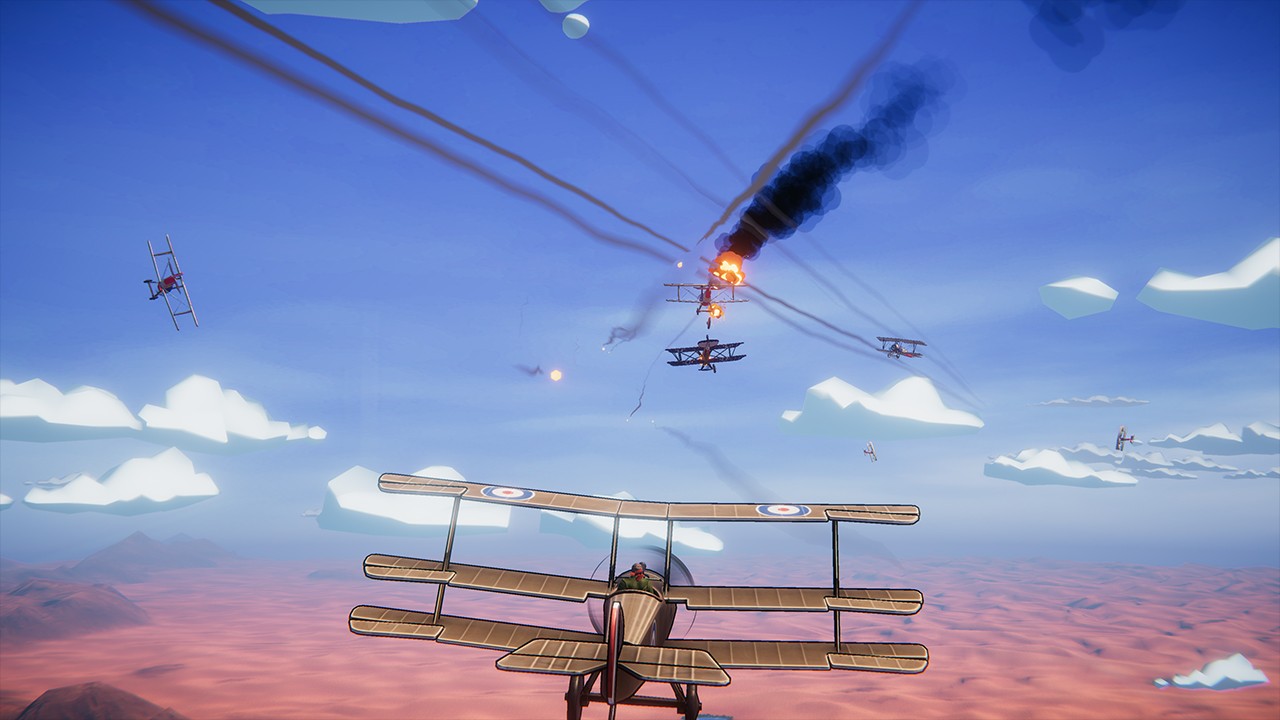 Now, I consider myself very lucky to have a job I love doing, and one I know others dream of doing as a youngster. (I drive trains, so the adage I’d never get paid for looking out of a window is not entirely correct.) But, if I could have any other job, a fighter pilot would probably be my first choice. Having been romanticised through several films, and knowing that the heroic pilots inspire future generations, it’s a piece of the pie that I would love to have. Whenever I see a game come to market that allows me to fulfil this fantasy I jump at the chance and get it on install quick, sharp. Fortunately, I was offered the opportunity to review Red Wings: Aces of the Sky, an arcade WWI game that explores the story of the Red Baron, while allowing you to play from either side of the battle.

Developed and published by All in Games, this fast-paced colourful arcade title asks you to fly one of ten unique planes during several styles of mission. You must take a seat in one of these nimble aircraft, follow the instructions from your superiors, and never deviate from the plan. You will get into dogfights, bomb supply routes and vital services, shoot down Zeppelins, and take on refuelling missions. You have a squadron with you, yet the responsibility to be successful falls firmly on your shoulders. The computer allies will cause some damage, and occasionally down the enemies, but don’t rely on them as they will let you down.

At first glance, the gameplay mechanics appear complicated. The controller mapping is shown on screen, and I shook my head in disbelief. It’s not until you partake in the tutorial you realise that it sticks to its arcade roots and is extremely easy to play. I’d 100% recommend that you complete the tutorial mode as it’s short, fun to play, but explains everything that you need to know to be successful. Once you pass this training, you are free to play the story or battle mode. The latter is about scoring the highest points against waves of enemy aircraft. Once you finish, your score will be posted online for everyone to see. It’s fun and mindless violence that allows you to hone your skills, and release some pent up aggression. The story mode lets you pick between the 2 sides and improve your chances of victory with a skill tree. 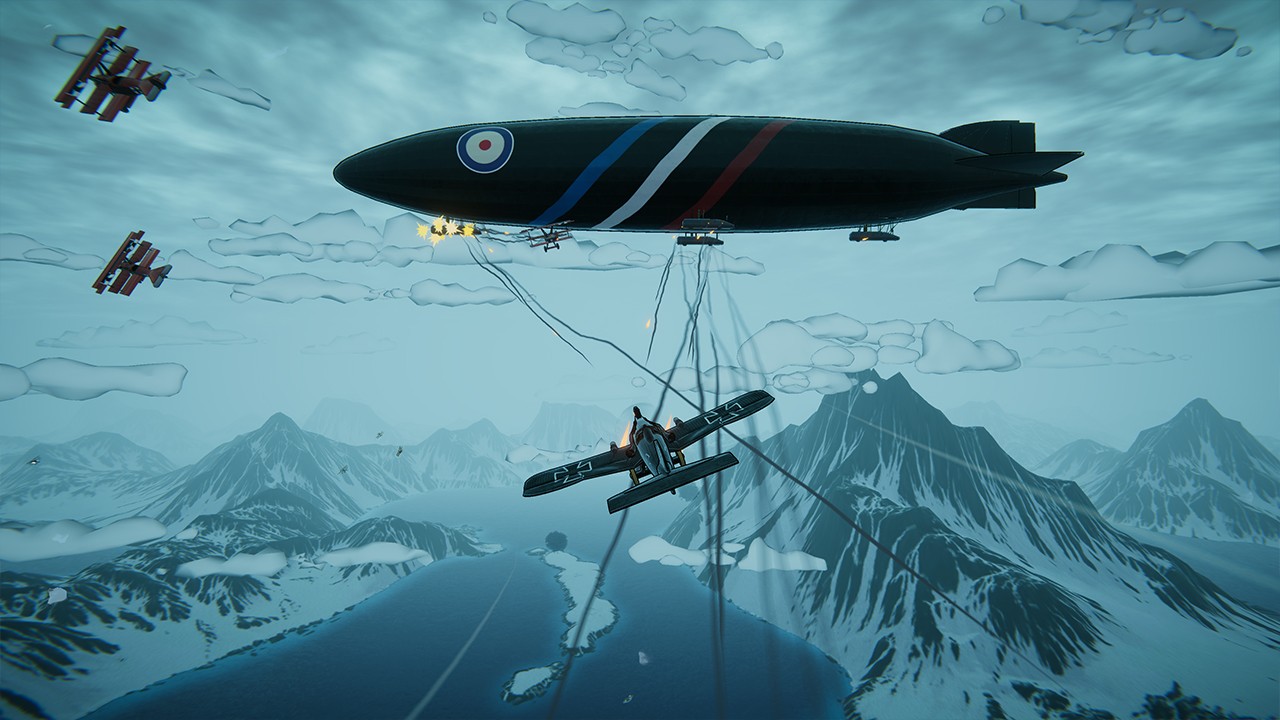 You can choose either the Entente Powers or Triple Alliance both allow you to pick from the selection of unique aircraft, each with its own statistics. You are given the freedom to improve your pilots’ skills with stars that are earned in each of the missions you complete. Stars are awarded for the time it takes to complete all objectives, and points are accumulated by destroying targets and linking combos. As you increase your skills, your special powers will improve; barrel rolls, a quick turn, pilot instant kill and finally calling in a death squadron. These 4 elements add to the arcade feeling, making you the most overpowered pilot that’s ever existed. Quite frankly, it was great.

All the missions you face are simple to complete, with very little challenge for the veteran gamer. They also all follow a similar pattern, making the action feel somewhat repetitive. You may think this is a negative, but, as each mission is short and can be completed in a limited timescale, this makes this the perfect pick up and put down casual game. When I first began playing this, I invested a considerable amount of time into it, but my subsequent sessions were shorter in time because of minor issues with the graphics, game difficulty and controls.

When I play an indie arcade game, I have an expectation surrounding the graphical presentation. I expect it to be of a cartoon style, with vivid colours, and everything is easy to identify. Most of those boxes were ticked. The cartoon planes moved smoothly around the screen, and shooting and targeting them was easy to achieve. The aircraft and landscapes were colourful and crisp, but it wasn’t always easy to decipher between friend and foe. When flying at night, it was hard to judge depth perception, and as a result, there were several times I flew too close to the ground and unfortunately blew up. Another frustration was the use of the HUD. It wasn’t detailed enough, and it was tough to identify whether the enemy planes were above or below you. I spent a lot of time aimlessly looking as I had no idea of their location. These issues were never game-breaking, they just made achieving 3 stars much harder. So perhaps they made a simple title that bit more challenging.

For all the minor annoyances with the graphics and visual presentation, they were soon forgotten because of the audio. I absolutely loved it! The music was in keeping with the era, and emphasised the WWI theme, and the sound effects were; deafening, in your face, and brought the game to life. The roar of the engines, the whistle of the wind, and the crack of the bullets as they flew through the air, all helped to set the scene perfectly. I was filled with dread every time the bullets ricocheted off my fuselage and thudded into the body of the plane. Arcade games are about fun and adrenaline, and the audio incorporated this and much more. 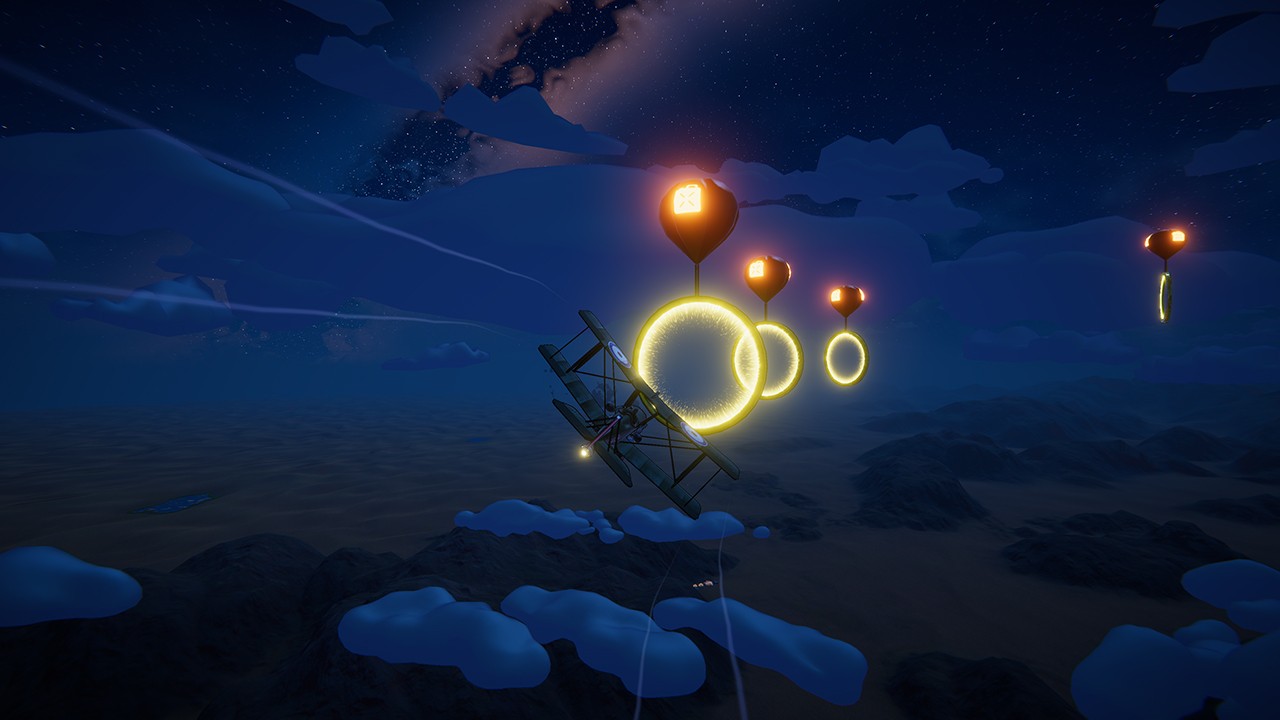 I’ve already mentioned the fact that the controls looked complicated, this wasn’t my issue. My problem was with the movement of the planes. They are supposed to be nimble and quick to move, at times it was like moving a tanker through the air. I wanted to lose myself to the game, but the movement broke the immersion and left me frustrated. Other than this, the controls were responsive and easy to handle, which made this title a joy to play.

As this can be played in short bursts you will be tempted to keep returning to progress. You’ll complete a stage and realise that you should have gotten 3 stars, so you’ll be tempted to have another go, and another, and another. You chuck in the ability to play with others, and you have the perfect recipe for plenty of replay value. A moderately difficult achievement list also adds some challenge if you are a completionist.

Other than its few minor drawbacks, this is a title that I absolutely loved playing. I enjoyed how All in Games approached the subject, the progression through the skill tree, the battle mode, and the incredible audio. My love of the theme probably developed me some rose-tinted spectacles, but I believe that will be a game that everyone will love. I recommend that you give this a go, even if you aren’t a fan of the theme. The casual nature will allow you to play it between other titles, and its short mission times lets you chip away at the progress, even if you are limited with your game time. Can you be the hero that WWI needs? Grab your plane and follow those orders.

A fast-paced arcade WWI fighter pilot game where the missions are quick, but the enemies are quicker.