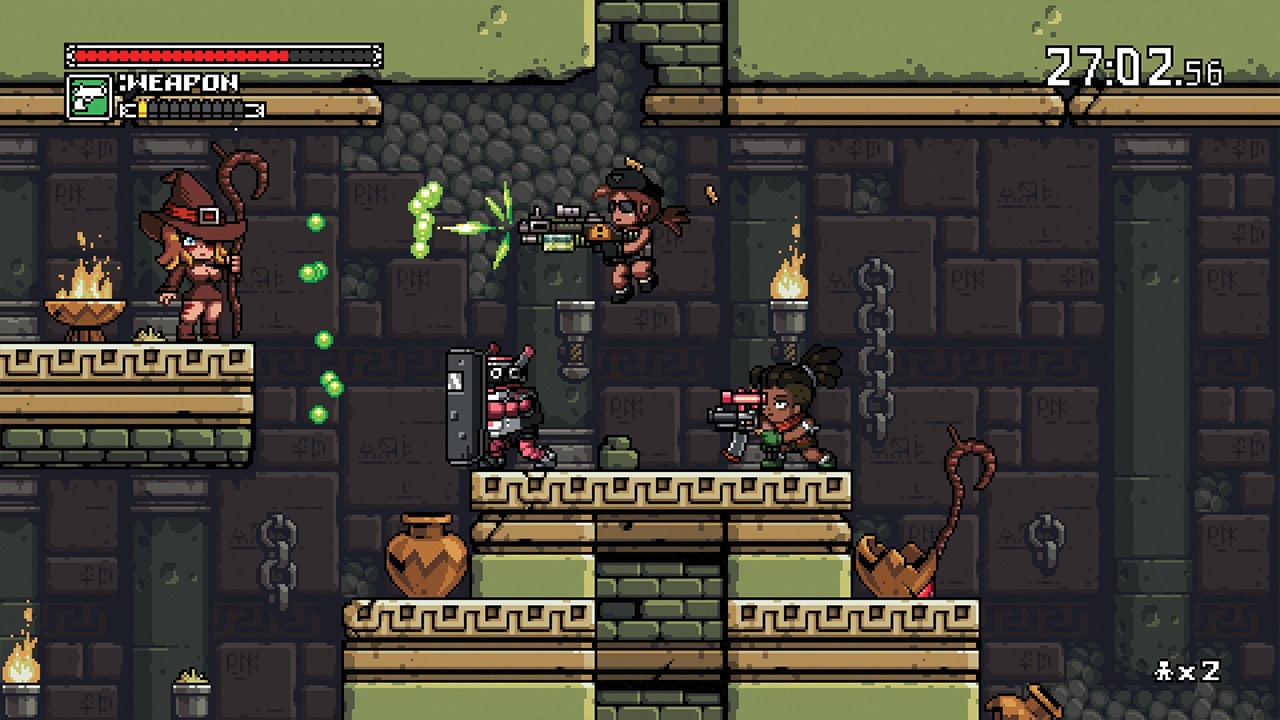 When it was first released in 2014, Mercenary Kings received some good applause on the PC and Playstation platforms. However, despite these reasonably favourable reviews, the game was found to contain certain elements that dampened the overall effect of its playability; with a very limited roster of characters, weak explosives and a control scheme that was just plain finicky. Four years on, Mercenary Kings Reloaded Edition, developed and published by Tribute Games, has now been released on the Nintendo Switch. So how does the game fare now with the added element of further development time? Does it contain a lot more bang for your buck, or will it just simply end up firing blanks?

If you’re not familiar with Mercenary Kings, then think of Metal Slug or Green Beret and you won’t be too far off the mark. Very much crafted within the retro mould, this 2D side-scrolling, action platformer will have you running, jumping and shooting over more than a hundred levels of varying terrain as you battle the evil armies of CLAW. With their quest for world domination, this opposing force have dug in with a dictatorship of a far-off island and it’s your job, as the heroic kings, to infiltrate the island and put an end to their dastardly plans.

Although essentially a platformer, Tribute Games have also injected a touch of genius by implementing a system that adds a very RPG-esque element into the gameplay. As well as competing against time constraints and fulfilling mission objectives, you’ll also find yourself looting for materials and items to help you in your quest. This, in turn, allows players to craft new weapons and armour in order to strengthen their characters with an almost limitless combination of components. With this inclusion within the formulaic template of the platforming genre, the developers have created a layer of depth that feels uniquely rejuvenated and very, very fresh. 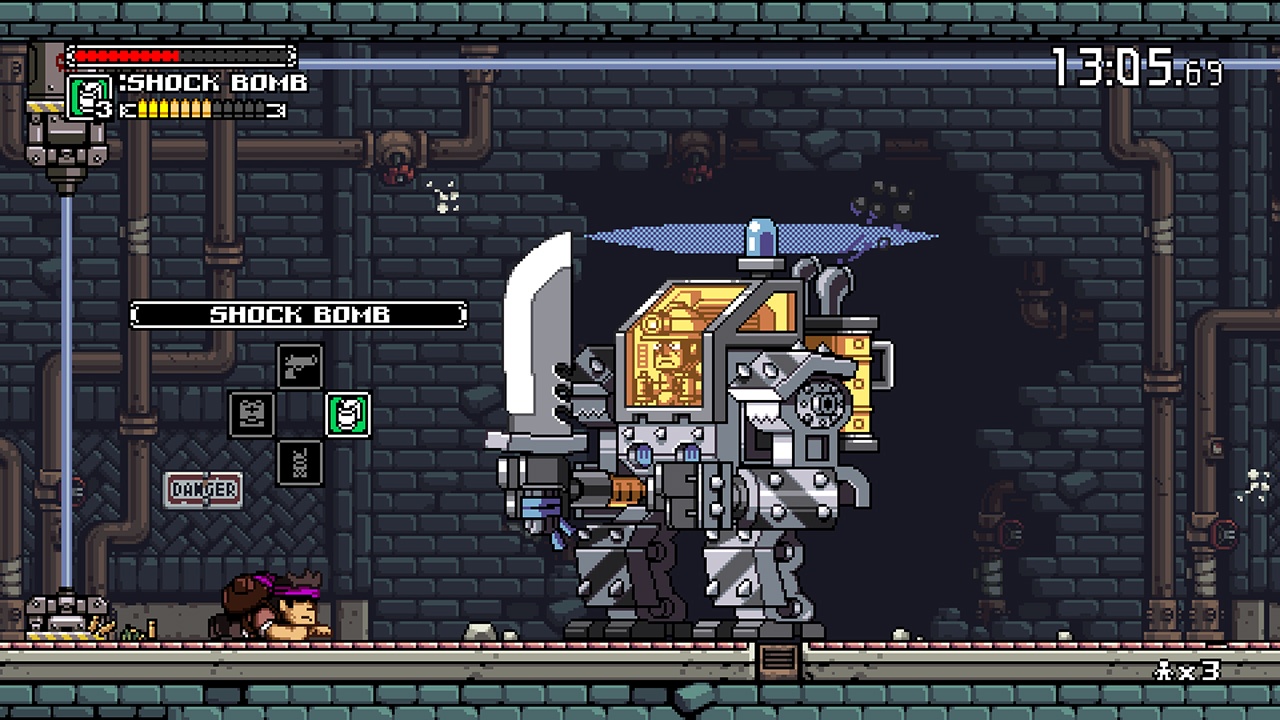 Graphically, the game has a distinctly retro feel to it with its pixelated model. However, when the switch is played in its docked mode, your television screen bursts with such colour and detail that the whole thing takes on a very modern look. Even in handheld mode, these graphics take on such a vivid sharpness that it produces a very pleasing vision of eye candy with no loss in any system performance. The sound is also a delight here, with a catchy soundtrack and punchy effects that add to the slickness of the games overall presentation. It really does feel that the developers have put in their all with this title.

Before you take on each mission, you find yourself within a base camp populated with a wealth of charming characters that help you to prepare for whatever task lay ahead. This prelude to the main action offers so many options, that you can easily lose yourself for some time doing various tasks such as crafting, buying and selling goods, as well as gathering Intel. You soon realise that this becomes an important element of the gameplay, as you really do have to prepare for each mission.

The game offers a very stiff challenge as the enemies you encounter really are as hard as nails. With over a hundred different varieties from snipers, grunts and even mechanised armaments, these opposing forces are relentless in their quest to stop you from achieving your goals. However, with the aid of a map to highlight your objectives, you begin to learn the layout of the various levels as you become more accustomed to the enemies differing styles of attack and before long, you’ll soon become a force to be reckoned with. This becomes even more prevalent the further you progress, as you’ll often find yourself playing over the same map that you may have previously fought on. This can produce a danger of the game becoming repetitive, but with a variety of different mission objectives and timers, any feeling of déjà vu soon passes as the game begins to throw different challenges at you despite a familiarity with the terrain. 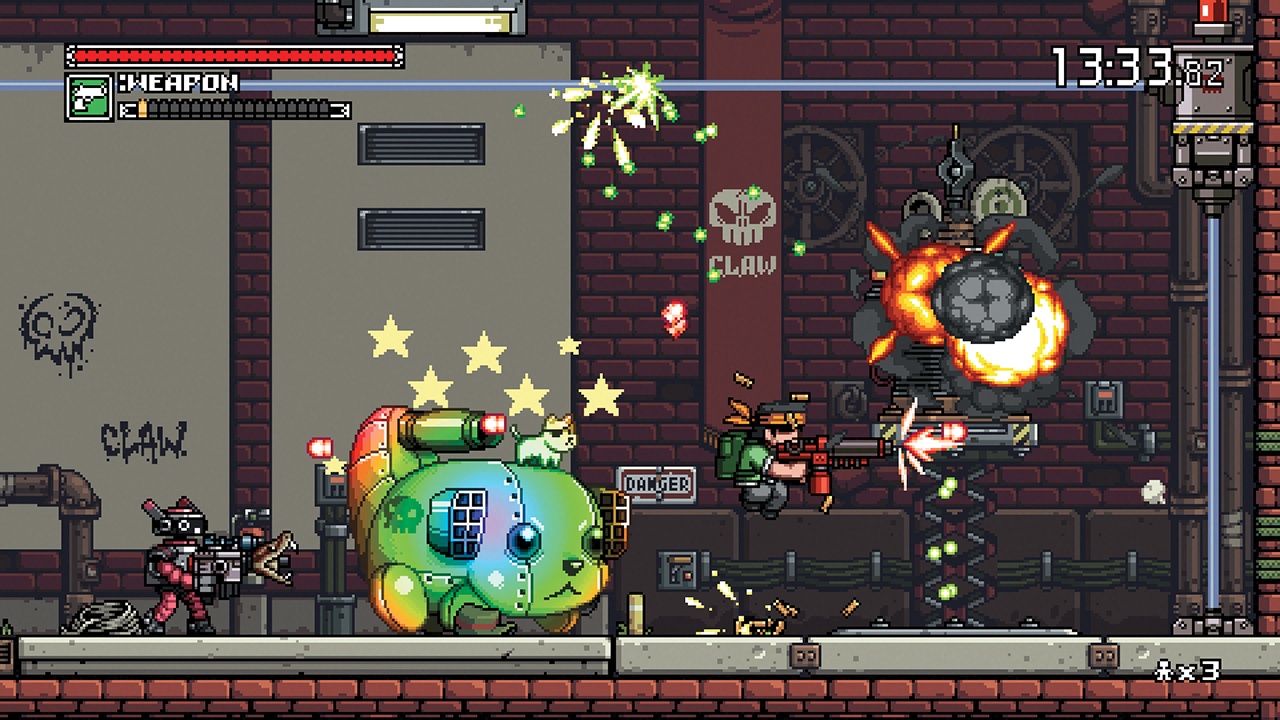 There is so much depth to this game that it simply offers you hours of fun, especially when you factor in the ability to play up to four-player local or online multiplayer. Where the original title had a roster of only two characters, this new edition sees a doubling in its content which offers a vast improvement when playing in this co-operative mode. Now having four different characters onscreen is a joy to behold and the fact that these two new additions are so much fun to play with also helps with the playability. The option for the local multiplayer works really well and offers a lot of fun and replayability, especially when the switch is docked; although you’ll need four joy-cons to be able to play in this mode. However, if you choose to play locally on just the switch screen, the constraints of splitting the display four-ways gives you a very small window for each person to play in; online though, this isn’t so much of a problem. It’s only a small gripe with the game, and is by no means a game breaker, but it does produce some very eye-squinting moments in order to maintain a degree of concentration.

This Reloaded Edition of Mercenary Kings contains many new elements and improvements from the original title. With the addition of new guns and knives, extra levels, more characters and a refined experience with the control scheme, it goes to show that the developers have taken on-board some of the criticisms from their previous release. This all adds up to produce what is, now essentially, a definitive version of the game. With a ton of content, a huge amount of depth, local and online co-op and endless hours of fun and replayability, this title offers a perfect addition to anyone looking to expand their games library on a budget. Mercenary Kings Reloaded feels as if it was made for the Nintendo Switch, with its beautiful aesthetics and pick up and play mentality, and is certainly a new contender for the indie king of the block.