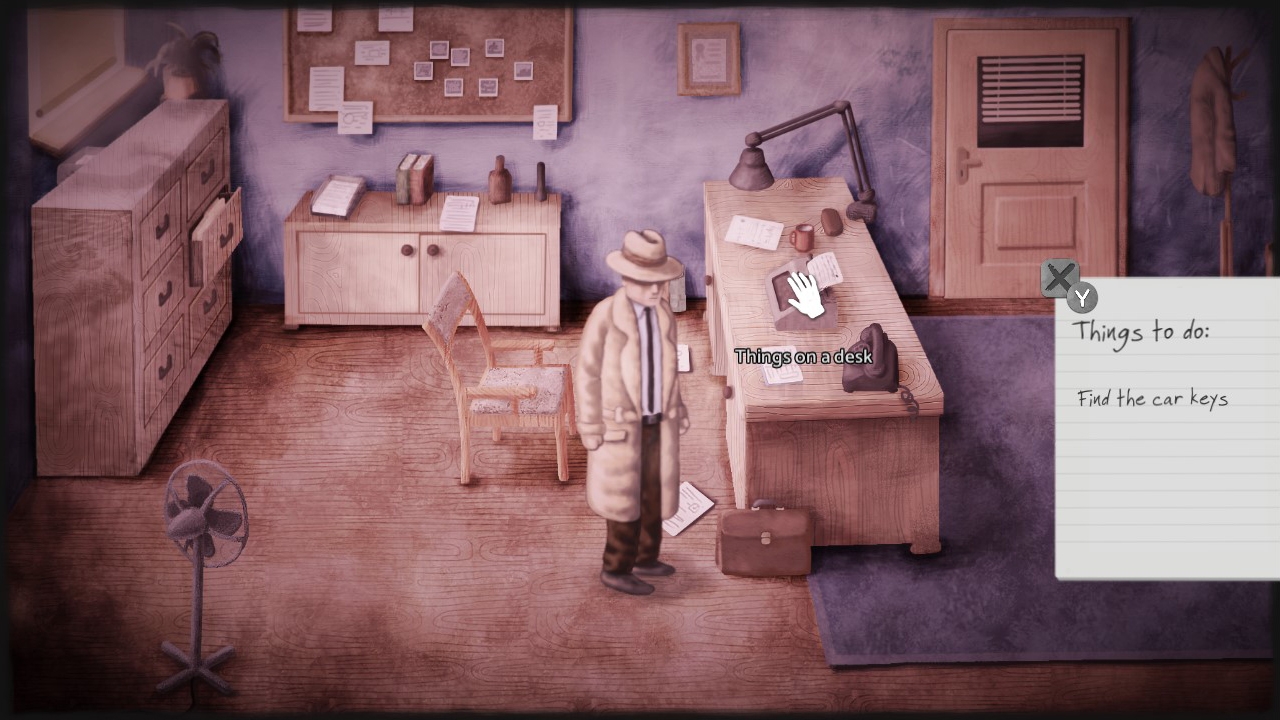 Earthworms is an unusual title, but I’ll leave that to you to unveil the meaning should you play the game. It’s a classic point and click adventure game; therefore, my territory and I’m happy to enter this slightly noir world.

You play Daniel White – a detective investigating the disappearance of a young girl. He’s a bit of an oddball. Like most conventional private eyes, he has his fair share of baggage and some sort of vice. With Daniel, his ‘vice’ is yoga. He also has visions which make him stand out as a fairly competent investigator – giving him a little more than instincts to solve a case. The yoga also has its place as it helps him stay grounded and fit into tight spaces. Really.

Let’s cut to the chase: Earthworms isn’t so user-friendly. The point and click genre is quite possibly one of my favourites. I know my way around the screen and anticipate inventory combinations that make no sense at all. However, from the very first screen, I wasn’t sure what to do. Initially, there wasn’t a HUD and no matter what button I pressed, nothing happened (you can also use the touchscreen – which is a little faster). When I realised I needed to exit the room, I was presented with a to-do list of finding my keys. Then the cursor appeared, but with only one button to use. No verb wheels or drop-down selections. 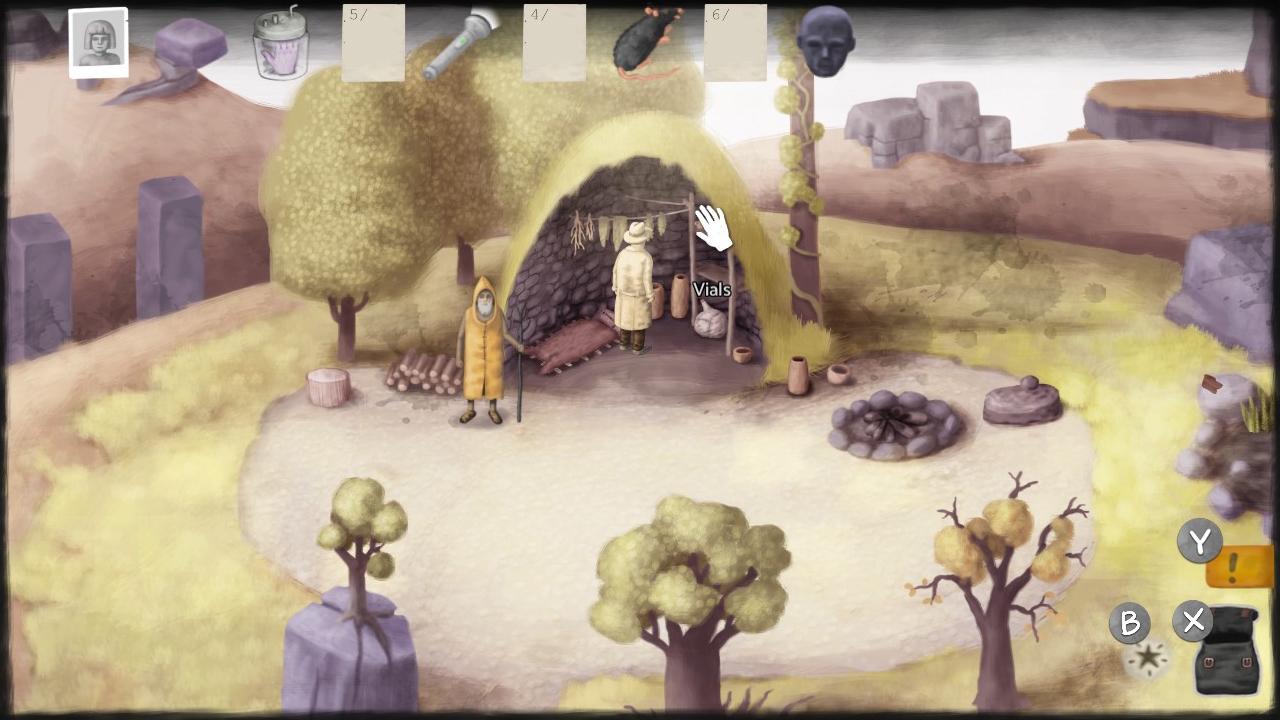 As the game opens up, you then have hotkeys for your objective, inventory and hints you come across. Usually in the form of your psychic ability which you can edge into a conversation. Daniel enters a room, picks up a vibe which forms into a vision that you can use towards your investigation. The hotkey selections stay in the bottom right of the screen throughout so you don’t forget the simple commands. Still, it’s interacting that was the problem for me. I grew up with the original Final Fantasy VII and absolutely adored it at the time. When I got the re-release version on the Switch, I had those same fond memories, but with a lot of the backgrounds, I was unsure what I could interact with because the art blended with the character models. Earthworms is a little similar. The art style is really nice, but nothing is really prominent and the majority of the time I was moving the cursor around every section of the screen looking for some sort of clue or interaction. Points of interest are tiny and hard to find – you really do take on the role of a detective in this case.

It’s easy to make comparisons to other titles, but if you take The Wardrobe: Even Better Edition as an example, you press a button to highlight the interactive areas. Even without that feature, there’s a depth of field present so you have an idea what can be manipulated. The art style in Earthworms is like a watercolour painting. In many of the locations, they really are beautiful, but for a game, it felt a little like a board game; a flat play area with a 3D model as your playing piece. On that note, the animation when Daniel moves is a little swift. It doesn’t have to be anything special – some of the best adventure titles are hardly cutting edge. I personally found it a mild distraction from Daniel’s chilled yoga states to someone dashing around the screen like they’ve had too many skinny lattes.

When Daniel does interact, it’s usually a combination of witty or sarcastic dialogue which I found quite amusing. Conversations with the characters you encounter are also a good experience; however, the choices you make are a little less than the norm – often with one linear response until you reveal a new hint. Despite that, the conversation is informative and enjoyable too. I gradually got wrapped up in the storyline as the narrative started to stray from the initial objective of finding the missing girl. It’s all text-based by the way – no voice acting. 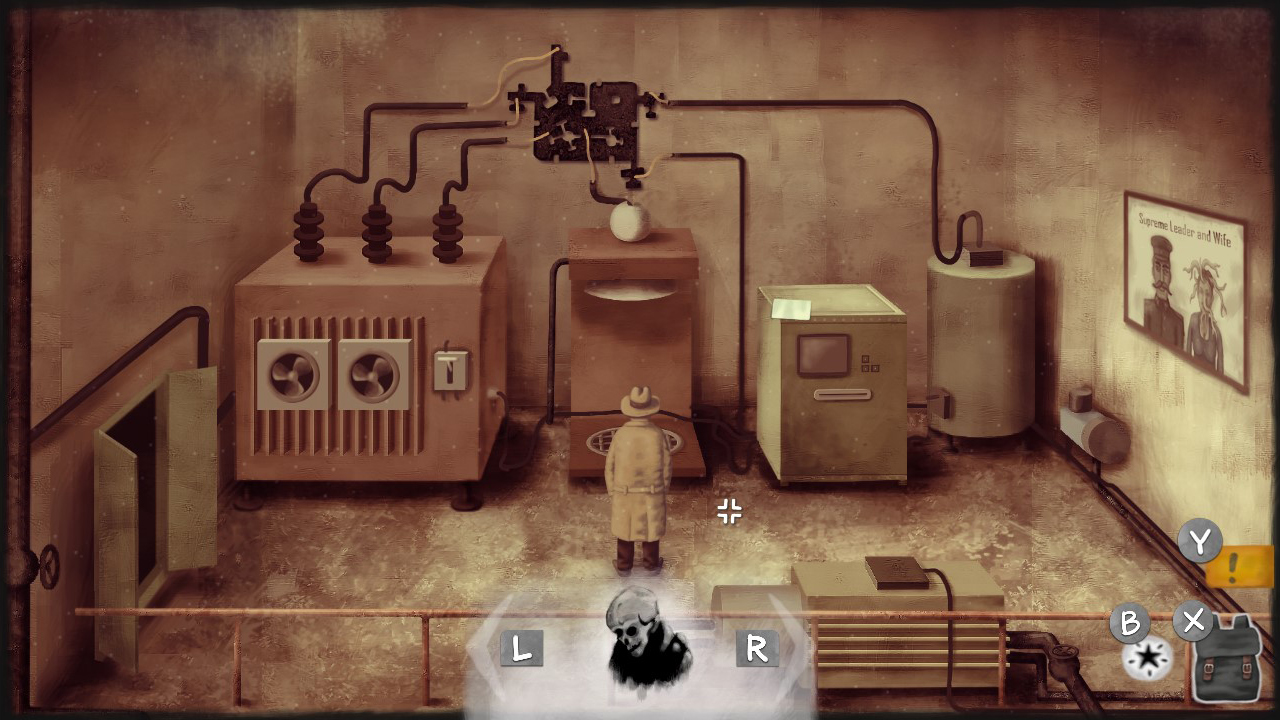 I always blast on about how much I love story and Earthworms has a decent one and features more than one ending, but as a game, you want to know what the gameplay is like, right? It’s good. It’s like most point and click adventure titles around the 90s to early 00s. True to form, some of the puzzles are infuriating, but my biggest gripe was finding out what I could do in each scene. Sure, you’re a detective – this is what they do, but it isn’t a simulator. The vast majority of the clickable areas can’t be added to your inventory, nor can they be manipulated. On many occasions, I would get stuck in an area – getting desperate and trying to use every item from my inventory. It was always greeted with the same response from Daniel: “It’s pointless”. It would have been nice for a bit of a variety – considering I found myself genuinely stuck for far too long. Worst is, you can’t progress to the next area unless you uncover almost everything – to some degree. Aside from your notebook that has your objective, there are no other hints.

I’ve purposely stayed away from the story as it’s not what it starts out as, and if you enjoy this genre, then Earthworms is another title you can add to your list – considering it’s pretty cheap on the Nintendo eShop now. But be forewarned that this is a little more frustrating than regular point and clicks – mostly because of the art direction. The colour palette is mostly the same, and though it’s aesthetically pleasing, it’s not always practical in approach.

If you’re an adventure fan like me, then Earthworms is worth a look – even if it is only to try the available demo to get a taste. I found it a little more frustrating than most, but the storyline gave it the boost it needs.