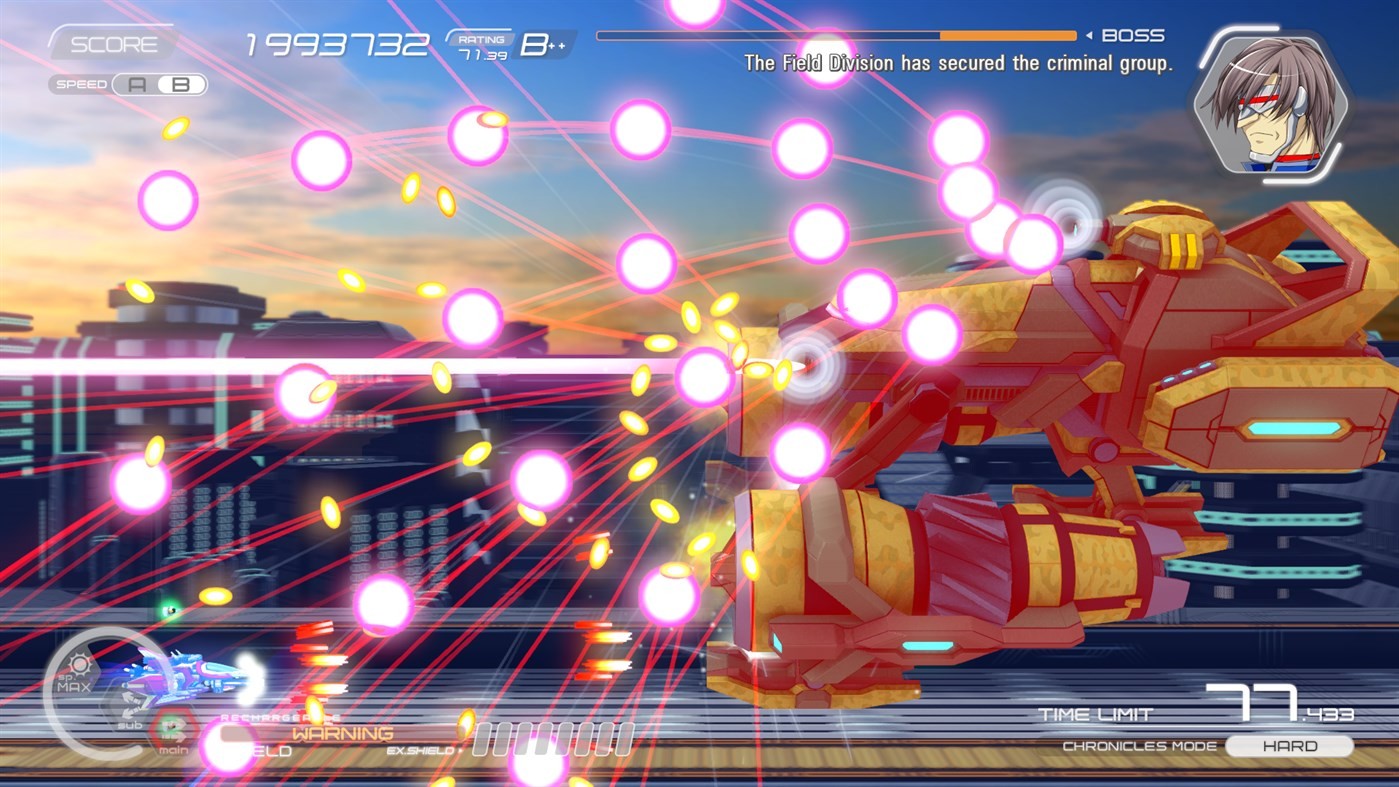 Natsuki Chronicles was announced for Xbox One by Japanese developer, Qute in 2014……2014! I have no idea why a relatively low-key shooter could be delayed 5 times and half a decade, but for whatever reason, it finally found its way to Xbox One at the very tail end of the year. Has it been worth the wait? Is any video game worth a 5 year wait? Honestly, I have no idea. All I can say is that, Qute’s long gestating, Natsuki Chronicles is a largely brilliant and often surprisingly innovative side scrolling shooter, one that ranks amongst the finest that I have played this generation.

By combining the best elements of mobile shooters with more traditional arcade mechanics, Qute have created a shooter that delivers the purity expected of a classic horizontal shoot ‘em up with the addictive unlockable abilities associated with recent mobile shooters (all without that horrible sense of unnecessary grind and questionable progression design that often blights mobile games).

For anyone who isn’t particularly keen on the idea of levelling up and unlocking new weaponry and abilities, Arcade mode has you covered via its traditional structure and on the fly upgrades. If judged purely on this mode alone, Natsuki Chronicles is a fantastic horizontal shooter, one that falls somewhere between the bullet hell madness of a Cave shooter and the more considered pace and identifiable bullet patterns found in the likes of Gradius and R-Type. It’s hectic for sure, and some of the boss battles are particularly tough, but it’s a manageable experience for the most part, one that seasoned fans of the genre should be able to finish before undertaking the inevitable chase up the leaderboards. 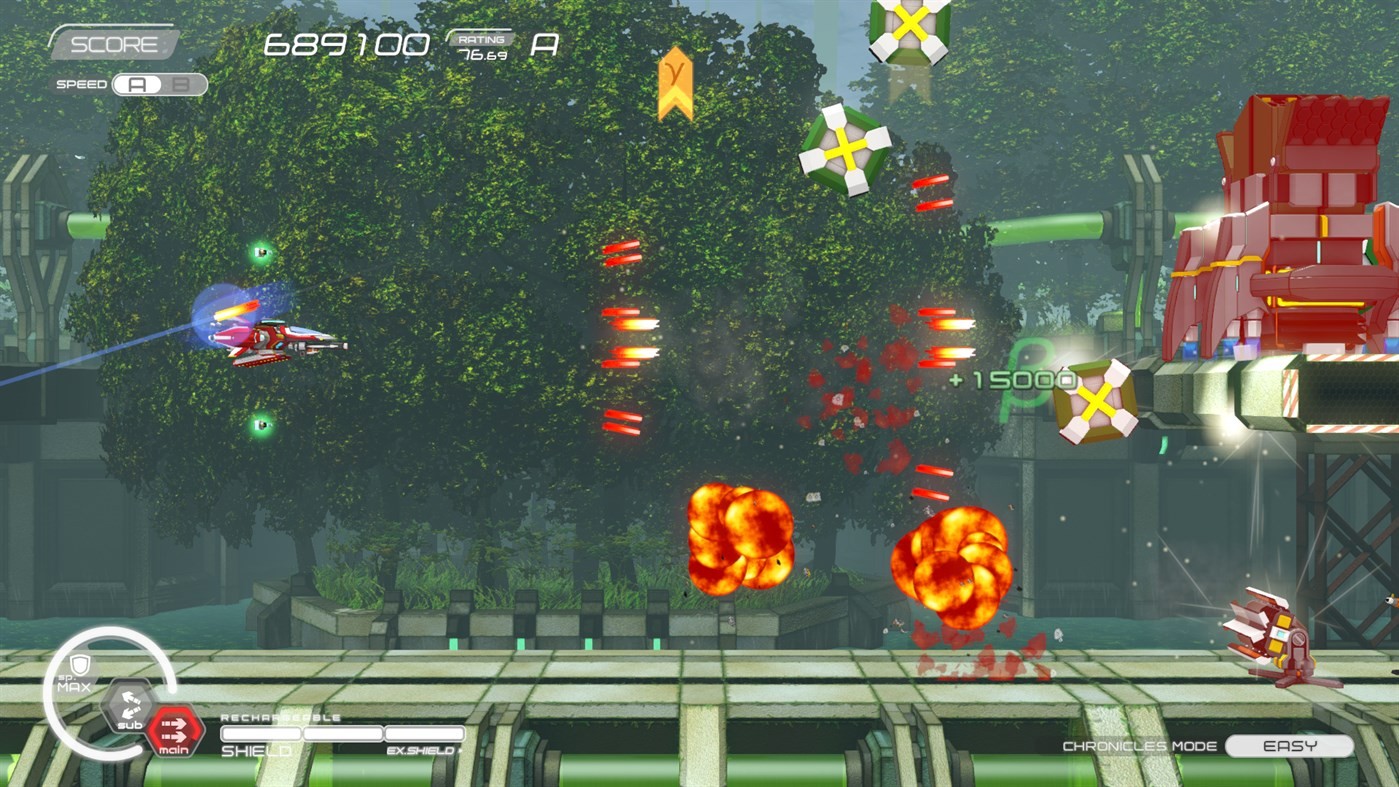 As fun as the Arcade mode might be though, it really is the games’ Chronicles Mode that sets it apart from its peers. Old school fans of the genre might balk at the lack of traditional skill-based progression in favour of more of a varied, grind-based progression system, but I for one found the constant upgrades, array of unlockable weaponry and host of unique defensive capabilities utterly addictive. I honestly can’t remember the last time that I was so invested in a shooter.

There is something about the perfectly timed drip feed of new abilities and unlockable weaponry in Natsuki Chronicles that makes it utterly compelling. Whether it be getting those S Rank grades on the easier setting or simply surviving each stage once your ramp the game up to Hard Mode, Natsuki Chronicles is a game that constantly provides the players with a reason to have one more go.

Some will invariably find the fact that many of the stages are all but impossible to complete on the first attempt (well, they were for me anyway), but the ability to unlock additional hit points after each failure alongside the unlocking and subsequent upgrading of weaponry and defensive capabilities makes for a hugely rewarding gameplay loop, one that had me utterly addicted to each and every one of the games’ carefully constructed but admittedly visually bland stages.

And that really is my only issue with Natsuki Chronicles – as well as the game might play, as carefully structured as the experience might be, and as great as it might sound (it really does sound fantastic), there is no getting around the fact that, from a purely visual perspective, Natsuki Chronicles isn’t much of a looker. Beyond the relatively basic visual style (something that I have always been willing to accept when it comes to shooters of this ilk), the big issue here is that the art design never makes much of an impression. It’s functional and far from ugly, but compared to the best shooters out there, Qute’s otherwise exceptional shooter is visually forgettable. The same is true of the story, but honestly, when you’re playing a Japanese language shooter, trying to keep an eye on the subtitles as you dodge intricate attack patters is all but impossible. 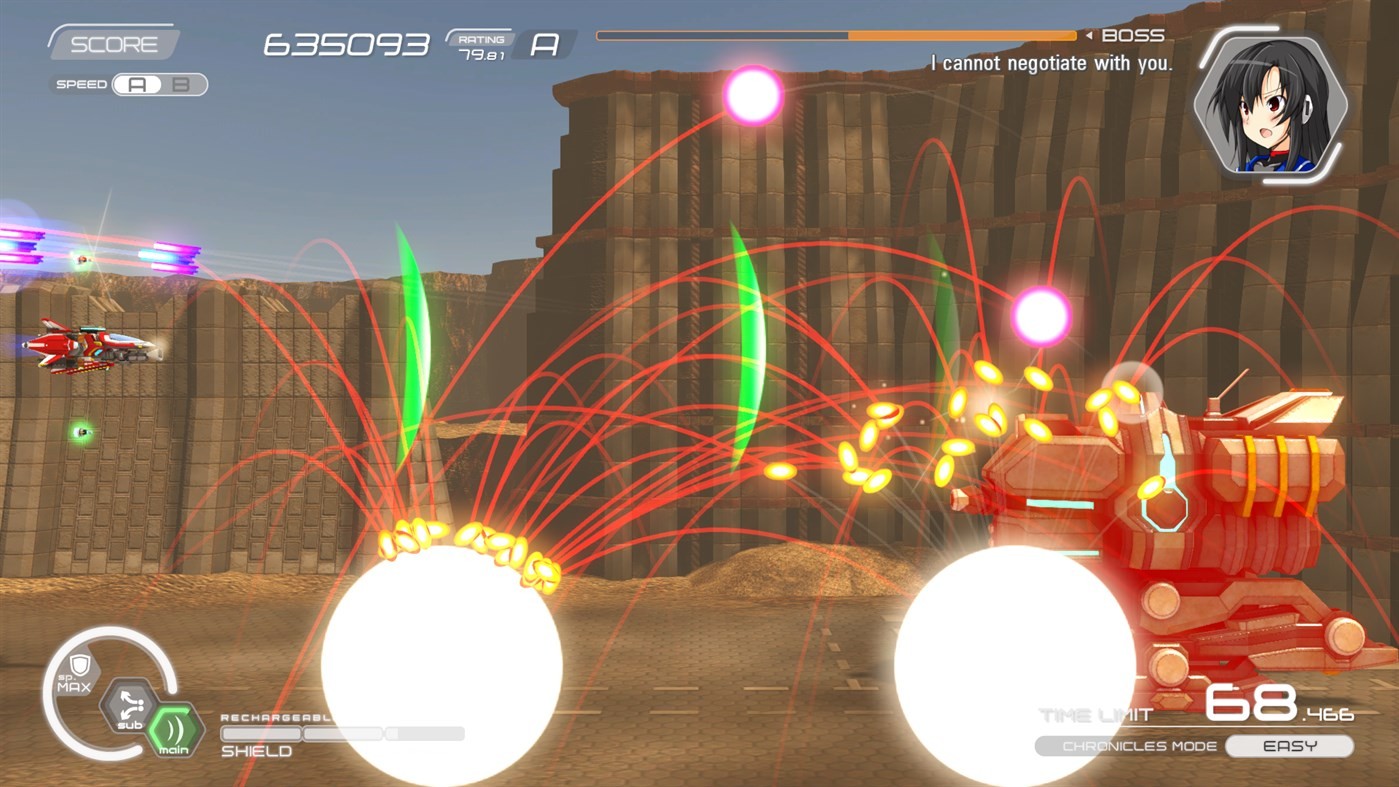 Still, while it might not wow from a visual (or storytelling) perspective, Qute’s long overdue shooter hits the mark in just about every other regard. One thing it does especially well is to provide a genuinely accessible shmup experience, something that is as historically as rare as unicorn poop. There is plenty of challenge for hardcore fans of the genre, but if you’re looking to dip a toe in to the traditionally icy waters of one of gaming’s most unforgiving of genres, you could do a lot worse than to start with, Natsuki Chronicles. The games’ upgrade system, while undoubtedly addictive, offers a path of progression to newcomers by both forcing players to familiarise themselves with stages while always offering a little more assistance each time they return for another try. As good as the gameplay might be (and it really is very good), the games’ structure is undoubtedly one of its greatest strengths.

Despite its disappointingly bland art design, Natsuki Chronicles remains a truly exceptionall shoot ‘em up, a game created with a clear love and passion for the genre but an obvious eagerness to push it forward as well. Small changes (such as the brilliantly implemented Bullet Trajectory Display) sit comfortably alongside broader changes to the progression and structure, combining to create an experience that feels simultaneously traditional and totally new. These changes, as positive as they might be, wouldn’t count for much though if the gameplay wasn’t up to scratch, and while it arguably lacks the finesse of an Ikaruga or Gradius V (most games do), it remains a technically excellent shooter to the core.