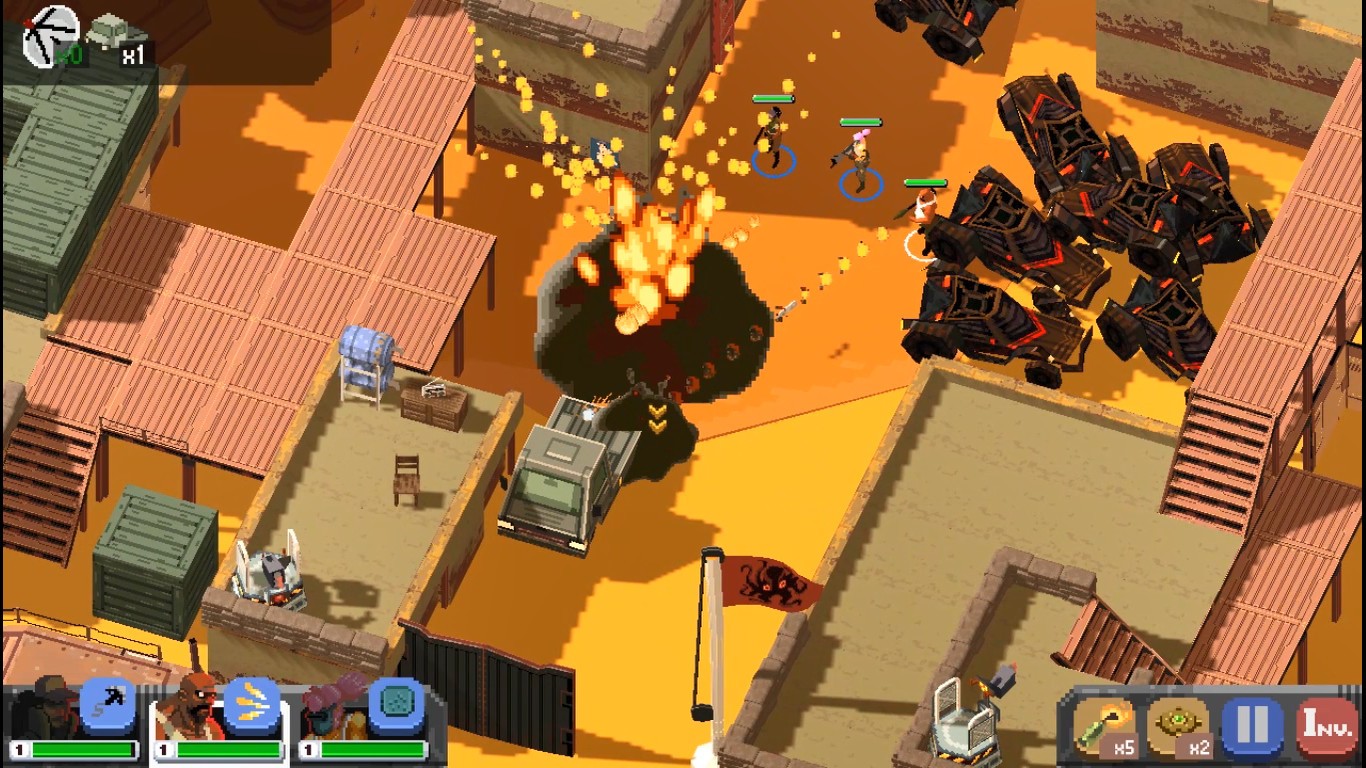 Have you ever thought, I’ve had enough of this oppressive regime? It’s time to gather my group of misfit friends, and take back control! If this has been something that you’ve long dreamed of, but fear the backlash in the real world, now is the time to fulfil these fantasies by playing Dog Duty. Developed by Zanardi and Liza, and published by SOEDESCO this real time strategy game has you controlling a band of mercenaries whose only aim is to take down the Evil Octopus Army. You are free to use guerrilla tactics to; dismantle key locations, pilfer enemy supplies, rescue team mates who have unique skills, and loot hardware. This title is still in an early access program, as such the opinions I write may be outdated on full release, and are only accurate at the time this preview has been published.

Dog Duty opens with a simple tutorial that ensures that you have a firm understanding of the basic principles of the game. You will learn how to move, use items, and how to complete any jobs available. Once you have rescued your teammates, and have completed the level, you are free to explore the open world map. You quickly realise that all roads lead to the Octopus capital, and it represents the beating heart of this evil empire, the only way you will defeat this overbearing tyrant is to wipe it from existence. In order to do this you must complete a number of missions, you will slowly weaken the army’s resolve, and when it’s at its lowest point you must strike to take control.

There are a number of areas open to explore, each has a set amount of tasks to complete, and you are free to tackle them in any order that you wish. As you venture around you will encounter pockets of resistance which must be crushed, if you are victorious you will be rewarded with cash, this can then be used to purchase; weapons, armour, and items for your vehicles. You are limited to the number of people in your squad, as you rescue people you must decide which skill sets work best for the mission at hand, and which work well with your game style. Your team can only be altered at the shops that you will find located throughout the gaming world. With this restriction in place, you must be prepared, and a fair amount of planning is required. No doubt you will make mistakes, I certainly did, when these errors creep in you’ll find that death is almost guaranteed. There is no permadeath feature in Dog Duty, the worse case scenario is losing all your progress from the last time that you had saved the game. If you are planning on biting off more than you can chew, then I recommend saving regularly as this will prevent you from losing hours of play, and equipment. 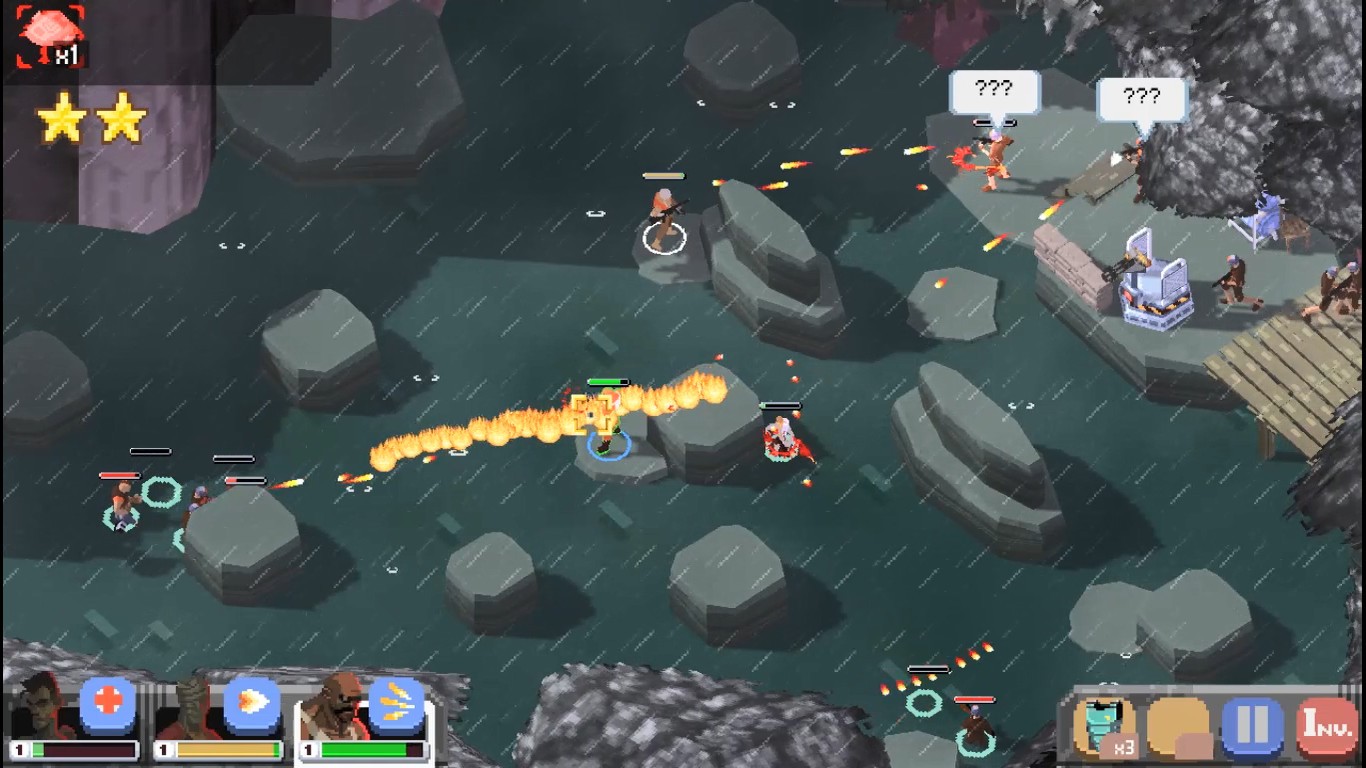 The difficulty of the latter stages really is challenging, you will find that you require an awful lot of skill, as well as a fair amount of luck. Using each of your characters special skill sets is essential, and this is where team selection and weapon choice is key. The enemies vary hugely from; standard grunt, armoured commando, an electric powered troop who reminded me of Dynamo from the film Running Man, and many more. You must scan the environment and utilise any natural cover, or sandbags to increase your defence. Attacking from a heightened position gives you an advantage over the opposition, so ensure that you make each area work in your favour, and don’t give the enemy the upper hand. As you move across the map you will use a variety of vehicles, I found these quite challenging to control, but once I got used to how they worked I managed to just about get by with using them. The fights that you have with other vehicles can be completed automatically with your squad laying down fire as you drive, or you can choose to control the action, either way the outcome will be the same, and you will automatically be awarded a small amount of money.

The game instantly reminded me of the late 90s classic real time strategy game Commandos: Behind Enemy Lines. The final presentation isn’t as clean or crisp, but the perspective in which the action takes place, and how you move your characters was reminiscent of Square Enix Europe’s title. Dog Duty has a Retro feel to it, the opening title felt like something that would have been present on a Sega Mega Drive, the simple approach to the character models and landscapes makes this one easy on the eye. A cartoon style that uses earthy tones, you’ll note that its not a vibrant masterpiece, but highlights the feeling of oppression. A number of unique biomes are used, the swamp and desert are two that stand out to me. Not only do they look different, but they also add a number of new obstacles that have to be factored in when attempting to overcome Octopus.

A fast paced game, needs a high tempo audio, the developers didn’t disappoint. The music is a high octane trip that really suits the theme. A synthesised score that has a strong beat, which is played continuously throughout. It’s a shame that the sound effects didn’t follow suit, the sound of your weapon firing, or vehicles moving is ok, but not mind blowing, it’s what you would expect from an Indie title. As you instruct your squad to move, or complete any task, this is acknowledged verbally. This was a terrible choice, the constant sound drowned out everything else, and oddly one of your men sounds like an evil villain from a children’s program. It just didn’t work, and was an unnecessary overkill. 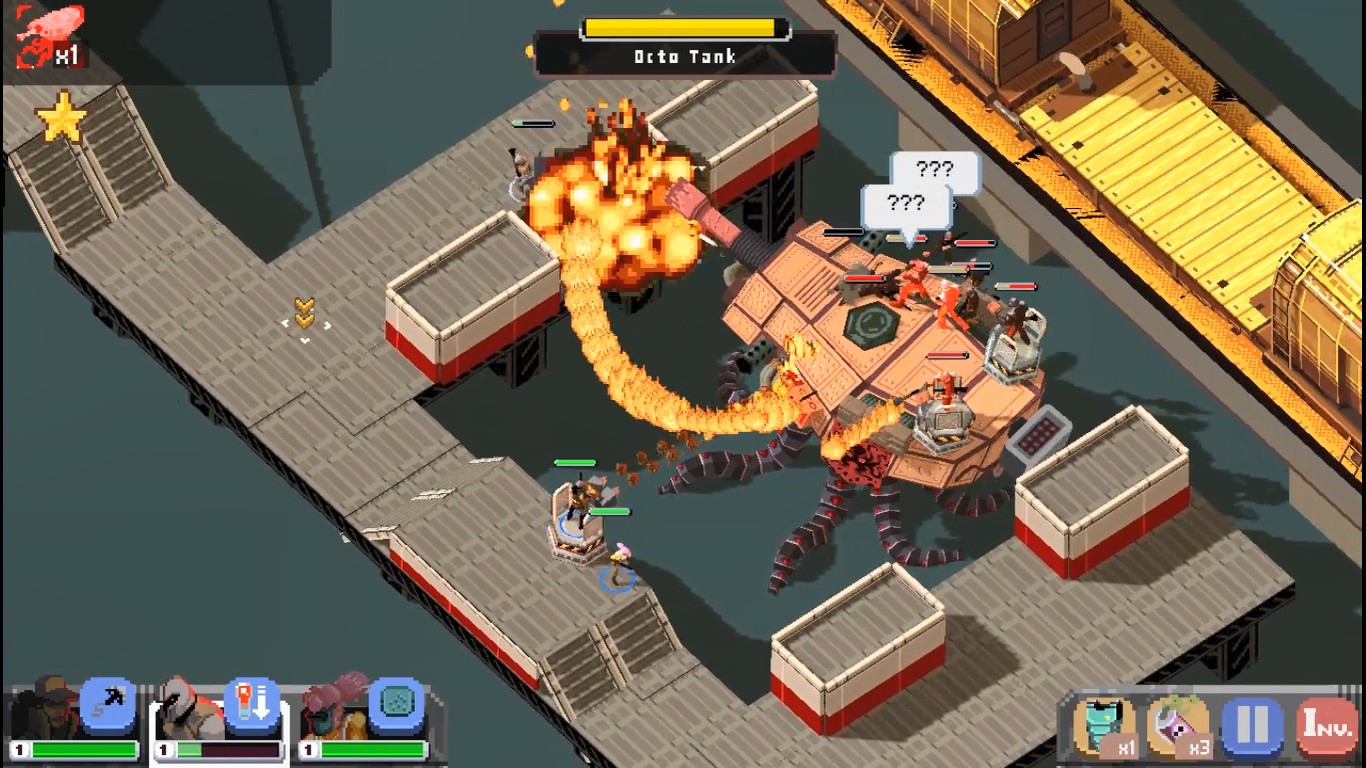 The developers are looking to port this title to console, so I wasn’t surprised to see full controller support. There are a number of games that state this, but you’ll find it either doesn’t work at all, or is poorly implemented. Fortunately, this isn’t the case in Dog Duty. Both mouse and keyboard, and the controller are easy to use, the button input is extremely responsive. The setup is well mapped out, and reminders are placed on the screen to help you if you happen to forget what you are doing. I’ve already mentioned the difficulty in controlling the vehicles, this is because the navigational focus shifts depending on which way it is facing, so if you are facing West, you must push the left analogue stick in that direction to move forward, my instincts were to push up. It took my mind quite some time to understand this, and I spent an awful lot of time driving in circles.

It’s rare that a strategy game has little replay factor, or nothing to draw you back to play again. Dog Duty certainly isn’t an exception, with numerous approaches available, a number of weapons to purchase, and different characters to mix and match, there will always be a different experience when taking on any of the available missions. With 22 achievements to unlock, this one will keep you busy while you are trying to defeat Octopus. The majority of these will be unlocked through natural progression, so minimum grind is required if you wish to achieve the 100% completion status. In order to finish the title I’d say you need to put approximately 10 hours aside, add another 2 to 5 hours if you wish to complete it. I would like to see a form of Co-Op mode added, I believe this would increase the games reach, and would allow a number of players to include their friends in the battle. A mission grading system would have also been interesting, such as; kill a number of enemies using a sniper rifle, etc. This would have been an additional layer to focus on, and would have increased the replay factor.

If you fancy something a little more casual than your big open world AAA titles, then this could well be one to go for. A simplistic approach allows you to focus your energy on a strategy to destroy your enemies. Though it’s touted as an Early access title, there is little to suggest that it’s not ready for its version 1.0 full release. With minimal issues, and plenty to enjoy, you won’t be disappointed to add this to your library of strategy games. Grab your motley crew, arm yourself accordingly, and take down Octopus one step at a time.